The Greek Syndrome of Belarus Statistics

At the beginning of the current financial crisis in Greece, the European authorities found that Greek official statistics were inaccurate and falsified. The Greeks been reluctant to show the real figures to fog their non-fulfillment of the ”Maastricht Criteria”,... 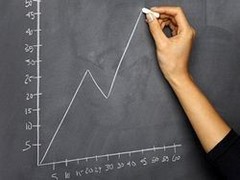 The art of statistics

At the beginning of the current financial crisis in Greece, the European authorities found that Greek official statistics were inaccurate and falsified. The Greeks been reluctant to show the real figures to fog their non-fulfillment of the ”Maastricht Criteria”, which imposes a limit on the level of public debt.  It turned out that the real ratio of the Greece debt to its GDP was four times higher than allowed.

Instead of starting structural reforms, strengthening the private sector, improving fiscal discipline and abandoning the practice of buying political loyalty through subsidies – the Greek government chose an easier way: heavy borrowing. When the debt overload was inevitable, the EC sent Eurostat officials to Athens to find out the real dimension of the disaster. The consequences of what was covered by misleading statistics is still shaking Europe and may undermine the whole Euro project.  A closer look at the situation in Belarus reveals very close analogies.

Unlike Greeks, the Belarusian authorities used both lending and printing money to keep their economy going. Like Greeks, they wanted to hide the results of their disastrous economic policy by manipulating the financial data.  However, it is unlikely that a Eurostat delegation will be invited to Minsk to verify the data.

The economic model of Belarus is similar to the market state capitalism of the late Yugoslavia. About 85% of GDP accounts to state owned or controlled entities. President Lukashenka often praises his economic model as alternative to existing or already collapsed ones. Yugoslav politicians used exactly the same words ("the third way") before their system collapsed.

The whole economical and political ideology of Belarus is based on this model. Initiating serious market-oriented structural reforms would admit that the model has failed – something Lukashenka cannot do. Loosing grip on the economy would mean also loosing a lot of sources for his personal wealth and the well doing of his family members and political comrades. Belarusian authorities do not even seriously consider deep structural reforms, which could be the only sustainable solution.

To prove the positive results of his model Lukashenka likes to hint all the times to the positive figures from international institutions such as the IMF. Indeed, Belarus GDP growth has been impressive compared to other ex-Soviet  states. The only caveat, often neglected by official statistics, is the fact that Belarus is the only country in Europe with an administrative non-market foreign exchange rate. Therefore ”achievements” of the Belarusian economy need to be interpreted with skepticism. Let us estimate the real value of the Belarusian rouble (BYR) and see how it will effect the data.

In recent history of Belarus there was only a short period where the market formed an exchange rate. On 19 April 2011 the National Bank of Belarus allowed commercial banks to buy and sell foreign currency not on the basis of the official National Bank rates. This lasted  for only about one month.  In this time the selling rate of the US$ (the so called interbank rate) varied in a spread of 1 US$= 7000-9000 BYR.

According to the National Statistical Committee of the Republic of Belarus (Belstat), in June-May 2011 the nominal GDP was 74 254 Billion BYR. Using a realistic rate of 1 US$=8000 BYR the figure for this period is 9,28 Billion US$. Calculated for the full year 2011 the figure should be 22,27 Billion US$ (estimated) or approximately 2 346 US$ per capita.

This realistic figure has a strong impact on various international  rankings of Belarus. In 2010, based on the official exchange rate  Belarus ranked 79 with 5 800 US$ per capita. Using the realistic rate now, Belarus would now rank 123 with 2 346 US$ per capita. Based on the IMF figures for 2010 Belarus, only Moldova, the poorest country of Europe, would rank lower.

Belarusian government is using figures to show the domestic and the international audience its successes, that are just politically motivated and have little in common with the real situation.

The reality is that for more than 3 months Belarus has no convertible currency. This is a unique phenomena in Europe and even in the ex Soviet Union region.  The situation of the producing sector is scary.  Since every factory needs to purchase goods in foreign currency,as input for their production, they are falling more and more in agony. They simply cannot buy what they need because there is no legal possibility for purchasing any foreign currency.

Different to the Greeks, the Belarusian authorities refuse to admit a crisis. All official comments or announcements repeat the "no crises" mantra commanded by the President himself.

The basis for any strategy to improve the current situation should begin with an analysis of why things went the way they did. The Greeks did that and took painful economical and political countermeasures, of course with strong support and advise of their European colleagues. Unfortunately, the Belarusian authorities do not want to analyze the dilemma seriously, mainly for the reluctance to admit that their economic model failed.

The whole problem is the system which simply does not work. The only realistic solution would be to build it up from the scratch. But, as said before, it would mean to accept that the whole ideology of the President have been wrong for seventeen years – something what will hardly happen.

Since there is no serious analysis, the countermeasures initiated are ridiculous and childish, not worth to mention. The helplessness is also shown by the fact that Belarus is asking the Chinese government for economic advise. Help from East or West will only come if there are signs that Belarus is moving in the right direction, economically and politically. So far this has not happened.

The authorities prefer to do nothing other than waiting for fresh money from whoever wants to give it. Most probably they will sell whatever can be sold (Beltransgaz to start with) and continue on their "path of success”.

This will continue until they will have nothing to sell. 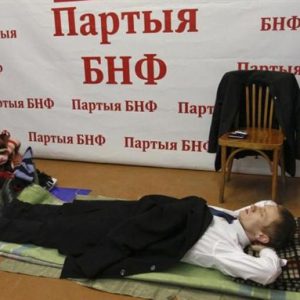 Belarus Digest starts to publish regular summaries of the most notable political and civil society news in Belarus. The new digests will attempt to give a richer picture of the recent events in Belarus, and will often go beyond the hot stories already available in other English-language media.

Over the last  weeks the news about mass protests and subsequent repressions dominated the headlines. Other notable events include the ongoing eviction of one the largest Belarusian opposition party from its headquarters (picture on the left) and trials against journalists and bloggers. The most interesting civil society news include creation of the online civil society archive and a public procurement seminar conducted with the Minsitry of Labour.

The protests at the border. On June 12th at a checkpoint "Bruzgi" on the Belarusian-Polish border a protest against the restrictions of motor fuel’s removal from the country was held. 200-300 people took part in the rally. Special Forces from Hrodna were called to place of protest, they used tear gas. According to police, 22 people were detained. 15 of them were sentenced to fines of Br1.05 million (approx. $210) each. Video from the protest action here. On June 13 a similar protest took place at the border checkpoint "Warsaw Bridge" in Brest, which was attended by more than 50 people.

“Revolution through a social network”. On June 15 and 22 the actions "Revolution through a social network"  continued. The idea is to gather democratically oriented ppl weekly at a certain time (Wednesday, 7 pm) on the main square of the cities, without flags and other symbols. The action is called as "network revolution" (the idea of action appeared in the social network Vkontakte), "silent revolution" (the protesters do not submit any claims), "revolution of applause" (during the actions participants respond only with applause).

On June 15 in Minsk one-two thousand ppl came to the action. Hundreds of people took the central squares in all regional centers and more than 10 district cities all over Belarus. Oktyabrskaya Square in Minsk was blocked with turnstiles and closed for the people. Photos and video here. Police detained more than 240 ppl, all were released without being drawn up. In Gomel, a “revolutionary” was fined Br770 000 (approx. $150). The amount of fine was collected by the Gomel residents.

On June 22 the action was held in Minsk (up to four thousand participants), all regional centers and more than 40 district cities. Almost all the central squares of major cities were occupied by official events, fenced with turnstiles and limited to access. Photos and video here. According to Viasna, during a protest around 460 people have been detained, including 19 journalists. The next day, 22 people were fined from Br70 thousand to Br1.05 million (from $14 to $200 at the official exchange rate). All were charged under the administrative Article 17.1 “petty hooliganism”.

Procurator against a blogger. General Prosecutor's Office opened a criminal investigation on the case of the national flag’s abuse in the blog Lipkovich.livejournal.com.  It is assumed that the page belongs to the well-known blogger Evgeny Lipkovich. Earlier Lipkovich Blog was blocked for public authorities for "spreading information of disruptive nature".

BPF’s eviction is a final decision. On June 21 the College of Minsk Economic Court upheld the decision of the court regarding eviction of the Belarusian Popular Front, one of the largest opposition parties. The decision came into effect from the date of publication. BPF rented its office in the center of Minsk for 20 years. Now BPF activists refuse to release the premises and organized around the clock in the office.

New public opinion poll. According to a recent survey of the Independent Institute for Sociological and Political Studies (May 2011), 33% of the adult population in Belarus received information from the Internet, while only 2.2% – from social networks.

State-certified consultants on social contracting. From June 14 a training course for the second group of consultants on the specialty "State social contracting in social services" has started. This is a long-term training course, implemented by the efforts of the National Institute for Advanced Studies and Retraining of the Ministry of Labour and Social Affairs, Minsk International Education Center and NGO "ACT". At the end of May 2011 the first 15 people became state-certified consultants.

Belarusian civil society’s web archive. On June 6 in Minsk, a public Web archive "Vytoki" (Origins) was presented. For the first time a unique archive on the history of the development of Belarusian civil society and the liberation movement during the last half century was created. This is a joint initiative of Human Rights Center "Viasna", Dyaryush, the NGO Assembly and Center Supolnasc’.

This digest was prepared by Belarus Digest the basis of materials provided by Pact.