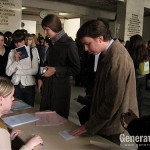 Despite having one of the highest student ratios in Europe, a virtually free higher education, and laws making study abroad difficult, the best and brightest young Belarusians continue flocking...

Diaspora Against Internet Censorship in Belarus

Members of the Belarusian-American Association responded to the new attack of the government of Belarus on the constitutional rights of their citizens by staging a protest in the very center of Washington, DC. The Russian service of the Voice of America covered the event supported by the Reporters Without Borders and WE REMEMBER Foundation.

Behind the extensive control over Internet access and online content that President Lukashenka has the obvious intention to reduce free expression in Belarus. Last year, the government claimed that China was a model in terns of Internet control. This year, President Lukashenka signed a decree subjecting online access in internet cafes to an identity check or to prior online authorization that depends on the applicant.