U.S. Will Not Lift Sanctions if Situation in Belarus Doesn’t Change

The United States chargé d’affaires in Belarus Jonathan Moore commented on the situation with U.S. sanctions against Lukashenka’s regime.

The United States chargé d’affaires in Belarus Jonathan Moore commented on the situation with U.S. sanctions against Lukashenka’s regime.

When taking a decision on sanctions against Belneftekhim Belarusian state-owned company in March 2009, the US will take into consideration the fact the situation in Belarus hasn’t changed over the last six months,” the US chargé d’affaires in Belarus told in an interview to PRIME-TASS.

Earlier, in September 2008, the Office of Foreign Assets Control (OFAC) decided to allow transactions between US persons and entities and Lakokraska OAO and Polotsk Steklovolokno OAO for a period of 180 days.

Washington hasn’t yet decided on sanctions (after March 2). But if the situation in Belarus remains the same it was in September 2008, a decision won’t most likely change, the diplomat said.

Mr Moore stresses that if the Belarusian authorities took more active positive steps, reaction of the US administration would be far more positive.

The chargé d’affaires also noted that the information about US sanctions against Belneftekhim state-run company would be issued by the US Department of the Treasury. Jonathan Moore added it would happen by March 2.

The US suspended sanctions against Lakokraska OAO and Polotsk Steklovolokno OAO in September 2008, because the Belarusian authorities released three political prisoners.

On November 13, 2007, the US Department of the Treasury froze accounts of the company in the United States and its branches in Germany, Latvia, Ukraine, Russia and China, as well as accounts of Belneftekhim USA Inc.

In response, Belarus recalled Belarusian ambassador to the US Mikhail Khvastou for consultations on March 7, 2008. At the same time Belarus strongly recommended US ambassador Karen Stewart to leave Belarus. She did it on March 12.

Besides, Belarus demanded that the US should reduce its embassy staff in Minsk and cut the staff of the Belarusian embassy in the United States.

“Art against Dictatorship” Attracted More Participants than the Organizers Had Planned 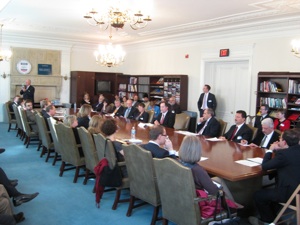 WASHINGTON – The turnout at the Washington exhibition of Belarusian artists “Art against Dictatorship” was unexpectedly high. The German Marshall Fund was initially planning a small round-table discussion on a little-known European country. Instead, what happened in Washington on February 12 looked more like an academic conference.

Iryna Krasouskaya was the keynote speaker at the round table on Belarus. In her opinion, there is no evidence of real improvements in the country. Everything remains the same – there are political prisoners once again, complete domination of state-controlled media, and all advisory bodies created by the regime work only as window-dressing. According to Iryna, the political prisoners are used by the regime as hostages and the only reason for everything that is going on in Belarus is to maintain the personal power of President Lukashenka. Belarusian participants in the round table were almost unanimous in sharing Iryna’s skepticism, while Pavol Demes of the German Marshall Fund and some other European guests were more optimistic. According to them, several decades ago, western Germans were successful in talks with Communists in Poland and other countries of the Eastern block, which bore fruit.

Therefore, it is important to keep trying to engage the regime by showing the benefits of democracy. Another dilemma the round table participants discussed was the relationship between the independence of Belarus and democracy. Some guests shared the view that because Belarusian independence was more important than democracy it was necessary to cooperate with whomever rules Belarus. According to this view, if Belarus is brought to its knees, it could easily be absorbed by Russia. Most Belarusian participants disagreed, saying that this was one of the myths exploited by the regime.

As a matter of fact, today Belarusian independence and statehood are very fragile because everything is in the hands of one man. What will happen to the country if something happens to this man? Civil society, a real parliament and other democratic institutions would be a much better guarantee of Belarusian independence than the whim of one person. Following the round table discussion, Ales Marachkin and Ales Shaternik spoke on behalf of the Belarusian artists whose paintings were displayed throughout the German Marshall Fund building. Mr. Marachkin was especially concerned about the state of the Belarusian national identity. According to him, the current Belarusian regime is not just a non-democratic regime, but also one which eliminates the Belarusian culture and language.

Currently, the number of schools with Belarusian as the primary language of instruction is almost twenty times less compared to the number in early 1990s. The artist from Belarus emphasized that it was equally important to build democracy in Belarus and to revive its national culture and identity. These two processes should go hand in hand. The success of the Belarusian exhibition “Art against Dictatorship” serves as evidence that Ales Marachkin was right – it is indeed possible both to support Belarusian culture and democratization at the same time.