Belarus Elections: the Opposition Achieved All It Could

By convening tens of thousands in the post-election protest, the democratic opposition achieved all it could. The false impression of a democratic election was destroyed. Despite...

By convening tens of thousands in the post-election protest, the democratic opposition achieved all it could. The false impression of a democratic election was destroyed. Despite the cold weather, 2010 protest was much more impressive than the protests in 2006 or 2001.

Some foreign media complain about the defeat of the opposition. But all other imaginable outcomes of the street protest in Minsk – the seizure of state power, or even the takeover of the Central Elections Commissions office or the state television by the demonstrators – were a priori unrealistic. The power between the protesters and the state was distributed highly unequally, given the nature of the current regime and the current situation. Even if we imagine that the opposition took control of the governmental building – then what? Could the opposition defend it against the state armed forces? How? And why?

Even if the opposition had forced Alyaksandr Lukashenka to a dialogue, it would have launched a process with an uncertain and most likely negative outcome. Any arrangements with the current regime are worth nothing and will be violated by Lukashenka when he deems convenient. This has already happened to the opposition-led parliament in 1996, to Russia’s attempt to build the Union State with Lukashenka, and to the European Union’s attempt to draw Belarus into the Eastern Partnership.

The events of December 19, including the traditionally flawed vote counting that brought one more overwhelming and unrealistically large victory for Lukashenka, have shown that the opposition did not need to nominate a single candidate.

In fact, as a result of nominating nine rather than one candidate, the opposition has fully taken advantage of the opportunities to promote its views during the campaign. The campaign helped the emergence of a number of new nation-level opposition politicians that gained useful experience and aired their positions.

Lukashenka’s regime cannot be defeated in an election that he himself organizes. Neither can it be defeated in street battles. A realistic goal for the opposition should be not the fall of the regime, but its gradual transformation.

Lukashenka and his loyal think-tanks are spreading promises. Belarus, they say, has developed what they call “strong democratic institutions” that allow the country’s economy, as they claim, to benefit the population. Given these “achievements”, the task at hand now is to simply adjust these institutions to the Western standards. Having articulated this position, the regime has no place to retreat, and the need for reform has not disappeared. The demonstration of the population’s protest potential, with the opposition taking over Minsk’s central square, may well contribute to the reformist sentiments on a purely emotional level.

The democratic opposition has achieved all it could: the false impression of a democratic election has been destroyed, and the population’s objection and frustration have been expressed. The West did not recognize the election, and Russia’s official reaction has been neutral. Engaging with the EU against the background of beaten journalists and politicians will now be difficult for the president. Moreover, the peace between Lukashenka and Moscow is unstable; in fact, the Kremlin may be waiting for Lukashenka to violate some of his agreements with Russia (as he tends to do) to attack him with more force than before.

The experience shows that an octopus-like opposition – decentralized, pluralistic, but coordinated on a small number of key issues – may be what is needed at the moment. The oppositional forces already range from uncompromising to “constructive”, from Belarusian nationalists to pro-Russian parties, from left-wing anarchists to Christian Democrats, from radical Mikola Statkevich to cautious Ales Mikhalevich.

Such opposition could not be split, just like it is impossible to split water. Each opposition structure should focus on a particular topic, be it the economy, the revival of the Belarusian language, or, say, the municipal self-government. To go one step further, a member of the opposition in the government, however authoritarian, can do much more than an honorable political prisoner. 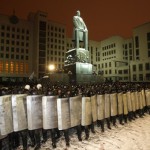 Yesterday Belarus authorities announced criminal charges against former presidential candidates. Also charged are their aides and journalists – eighteen people in total. These people are already kept in a special KGB prison and are likely to be used as hostages in the future diplomatic war with the West.

The criminal charges followed violent suppression of tens of thousands who came out despite very cold Belarus winter and intimidation to protest against falsified presidential elections the center of Minsk last Sunday. The protests were peaceful with the only exception of what is widely believed to be a KGB-staged vandalization of a governmental building. More then six hundred people ended up in detention and many still face further beatings and torture by police.

Reaction of the West

The United Nations, the European Union, the United States, the Organization for Security and Cooperation were among those who protested against recent human rights violations in Belarus. Most western leaders already signaled their dismay over beatings and detentions of presidential candidates and hundreds of others.

The election day brutality of Belarus authorities ended a short spring in their relations with the West. Radoslaw Sikorski and Guido Westerwelle, Polish and German foreign ministers recently travelled to Minsk trying to pacify Mr Lukashenka by offering him cash bonuses for better respect of human rights. Now, the disillusioned Polish foreign minister announced that there would be more sanctions against Belarus authorities. Mr Sikorski also promised more support to the Belarus civil society. However, it may be too late because not much of civil society is going to be left in Belarus after the last presidential elections.

The fate of political prisoners

Although most of the detained in Belarus will be released after serving a week or two of administrative arrests, they are likely to face problems at their universities or at work. A significant number of them will leave the country ask for political asylum abroad. The Belarus authorities would certainly be happy to see the most active protesters to leave the country voluntarily. Thousands from Belarus are already political refugees in Europe and North America.

The leading politicians and journalists are going to be kept in prison much longer. Those seventeen who face criminal charges will be used as bargaining chips in negotiations with the West. Removal of sanctions or additional economic aid are likely to be demanded by Belarus authorities for their release. By keeping them in prison, the authorities are also hoping to punish them for their active political stand and to intimidate the rest of the population.

What the international community can do

Is is important for the West to understand the name of the game and be prepared for the long-term support of Belarus civil society. It is not enough for the West to introduce additional sanctions. Sanctions and travel bans are not going to make lives of the leaders of the Belarus regime much worse. They will still have much more comfortable lives than the rest of the Belarus population.

The West should triple its support of the remaining civil society in Belarus. It is important to increase broadcasting to Belarus from outside of Belarus and help Belarusians who are in the country to remain active.

Access to information is the key to any changes in Belarus. Most people in the country receive information either from TV or from FM radio stations. Although there is already Belsat, an independent TV channel located in Poland, its impact is weak. The channel broadcasts only several hours per day and only available on satellite. Those who take an effort to buy a satellite dish and turn on Belsat already know what the situation in Belarus is like. There is not much point in evangelizing those are already converted. It is more important to reach an average Belarusian by re-broadcasting television programs across the border. Increasing the coverage of Belsat should be the main priority.

Belarus is surrounded by European Union countries – Lithuania, Poland and Latvia. The Lithuanian border is less than 140 km from Minsk. If the Lithuanian President Dalia Grybauskaite already feels guilty for her support of Mr Lukashenka, she should facilitate re-broadcasting television and FM programs to the territory in Belarus. There should be no illusions – breaking through the information blockade is going to be difficult. Mr. Lukashenka announced yesterday that he would particularly target internet and internet and independent journalists during his forth term.

The European Union should also encourage people to stay in Belarus rather than to leave. Journalists, human rights activists, university lecturers, researchers need support when they work inside the country. There is no private sector in Belarus to support them and getting a public sector job is nearly impossible. The West should establish grants and scholarships schemes so that people can stay and work on development of civil society inside Belarus. Small grants for mini-research projects in Belarus or inviting Belarusians to work abroad on a short-term basis could make a significant difference.

These measures should be implemented now while there is increased attention to Belarus problems. Unfortunately, even a few weeks from now, very few are going to discuss Belarus in the West. Already yesterday on Euronews, snow in Paris was more important than blood in Minsk.

Yarik Kryvoi
Yarik Kryvoi is the editor-in-chief of Belarus Digest and the founder of the Ostrogorski Centre.
all articles » Follow @
Alexander Lukashenko Diplomatic Relations Minsk Paris