Victoria Azarenka – the Bright Side of Belarus

The 22-year-old Belarusian Victoria Azarenka has just defeated Maria Sharapova to win the Australian Open and take over the women's No. 1 tennis ranking.  Very few people know that Sharapova's parents are also from Belarus. They fled their home to escape the... 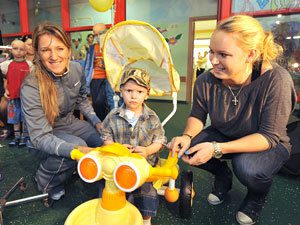 Azarenka and Wozniacki at a 2010 charity event in Minsk (photo: kp.by)

The 22-year-old Belarusian Victoria Azarenka has just defeated Maria Sharapova to win the Australian Open and take over the women's No. 1 tennis ranking.  Very few people know that Sharapova's parents are also from Belarus. They fled their home to escape the fallout from the Chernobyl explosion before she was born.

Although Sharapova sometimes visits Homel, the native town of her parents, Azarenka has a much stronger connection with the country.  She regards Minsk as her most beloved city where she often travels to to have fun.

Victoria Azarenka was born on July 31, 1989 in the capital of Belarus, Minsk. Her parents were born in the village Seleckaye in the Mahilyou region in the east of the country. They moved to Minsk in 1986 where Victoria was born.

According to minsktennis.com Victoria started practicing tennis at the age of seven. Her first coach in Minsk was Valyantsina Rzhanykh who helped Victoria fall in love with the game and noticed the girl's talent. Already at that time her talent was obvious and she had great determination to succeed.

In an interview with Belarusian tabloid Komsomolskaya Pravda, her first coach said that Viktoria had a very solid character and was never afraid of anybody. She could fight with any opponent even if they were much taller and older then her.  Vika, with other Belarusian boys and girls, fielded balls for older players such as Max Mirnyi and Vladimir Volchkov who have represented Belarus in the Davis Cup. Who would have imagined that she would far exceed her idols?

Minsk is Her Most Beloved City

Victoria calls Minsk her favourite city and although she spends most of her time elsewhere, she is always happy to come back. In 2010, Vika organized a charity exhibition match with then No. 1 female tennis player Caroline Wozniacki, to raise money for children in Minsk. This is what she said about the charity match with Wozniacki in Minsk:

This match was broadcasted throughout Europe. We have collected a relatively large sum of money and attracted much attention to the Republican Center for Pediatric Oncology and Hematology. Belarus has never seen anything like it, so it's a lot of spectators, and tickets sold out literally in two days.

The charity tennis event was very successful – many people showed up to support the cause. Azarenka and Wozniacki had an emotional experience when they visited children with cancer in a Minsk hospital.

She regularly follows the development of tennis in Belarus, according to minsktennis.com:

Belarus has more tennis schools now. I wish that we had more juniors, because a lot of kids play well until they reach 14 – 16, and then, unfortunately, they are no longer progressing. I think with the new structure, with new preparation and with new support, there will be more and more tennis players in our country and we will have healthy competition.

Last October in her interview with Belarusian tabloid Komsomolskaya Pravda, she said that she had recently moved from the United States to live in Europe:

I became calmer on the court, began to receive more pleasure from tennis – this brought self-confidence and a more positive attitude. It is important to emphasize that for the next season I will not be training in America, as I have for the last six or seven years. I will work in Monte Carlo, I now live there.

She was then planning her trip to Minsk: "I am flying to Minsk on a direct flight, I will have fun there…"

In recent interview to the Australian Open organizers when asked where she feels at home, she did not hesitate to say that "home is always going to be Belarus."

Good luck Vika, you are the bright side of Belarus! 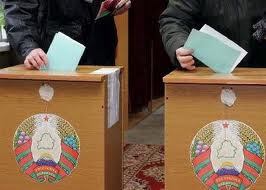 In September 2012, Belarusians will be asked to elect a new parliament. The opposition is still deciding whether to take part in the elections. They are not sure for a good reason: election fraud has become common practice in the country at all levels. Although Lukashenka recently announced that he would implement political reforms, no one is taking his words seriously.

The regime opponents must choose from two options: boycott or participate. To boycott would help delegitimize the elections in the eyes of the international community, while active participation could be a good opportunity to train activists and to deliver their message to the people.

In 2008, the opposition participated in the parliamentary elections. The government was eager to strike a deal with the West and had even hinted then that it would let some people with dissenting views into the parliament. But no dissidents were allowed, and the elections were hardly freer than any other election in Belarus in the 2000s. The opposition felt deceived.

Can Lukashenka's opponents gain anything from the 2012 elections, when we consider the marginal role of the Belarusian parliament which does not even draft laws itself but acts as a rubber stamp institution?

Elections in a Terrorized Country

Pessimism prevails among democratic activists. They believe that the regime will continue its “business as usual:” declining registration to candidates, impeding its opponents' campaigning efforts, harassing them and stealing votes. The most important issues are control over the vote count and proper election observance, which is non-existent.

Moreover, this time the country is still recovering from the consequences of the massive purge of the opposition after the 2010 presidential elections. Some of those who actively participated in 2010 campaign remain in prison, including presidential candidates Andrei Sannikau and Mikola Statkevich. Others have fled abroad. And the rest are trying to survive by keeping silent inside the country. The 2012 elections may differ in this regard from the 2008 elections which were held after the release of Kazulin – a gesture made by the regime to mend fences with the West. Lukashenka, may, of course, release political prisoners by September 2012 – it is difficult to predict.

Several major players have called for a boycott. Among them are the United Civic Party, Christian Democrats, “European Belarus” and Conservative-Christian Party of the Belarusian People's Front. “No elections are possible in a madhouse”, said Anatol Lyabedzka of the United Civic Party. Paval Sieviaryniec of the Christian Democrats told the Nasha Niva weekly that since a boycott would happen even without any special effort, the opposition should organize a parallel All-Belarusian Peoples Congress.

No Resources for Boycott

There is, however, no consolidated decision concerning the boycott. For instance, the leftist 'Just World', as well as Niaklyayeu's "Tell the Truth movement and Milinkevich's "For Freedom", are considering participation in the elections. The Belarusian People's Front proposes putting up candidates and then withdrawing them at the last moment.

Uladzimir Nyaklyayeu, former presidential candidate of "Tell the Truth", declared that his movement would participate in the elections only if all political prisoners were released. However, “Tell the Truth” seems to be drifting towards participation. Nyaklyayeu explained: 'An active boycott requires many more resources than participation in 'elections.' To inform the people of the reasons for a boycott, one needs many more resources than the entire opposition has.'

In addition a boycott would require a high level of mutual trust between oppositional parties, which may be a problem. A boycott can be truly effective only if all parties or at least major groups join it and resist the temptation to make a separate deal with the dictatorship. At the 2010 presidential elections there was no single candidate from the opposition. Nine candidates competed and the mutual trust between them could have been better.

Unfortunately, the opposition can hardly hope for street protests. It was unable to use the popular resentment over the economic crisis last year and many doubt it can mobilize citizens for massive protests any time soon. With Russia's help the regime relieved the most acute social and economic problems, at least temporarily, which makes the population less unhappy. As analyst Andrei Fyodarau recently told the Nashe Mnenie, the scale of protests did not reach the level which would compel the authorities even to pretend that they were planning reforms.

In such circumstances, the opposition enters the game with little chance to gain anything. Of course, the regime is interested in the opposition's participation: it would give Lukashenka's opponents some leverage. Declaring that they would boycott, the opposition gave away this card while not having much else other than that. Some analysts say that the boycott in 2000 forced the regime to bring some persons with alternative views into the parliament while active participation in the 2006 elections yielded nothing.

Elections as a Chance

Another round of rapprochement with Russia and the end of dialog with the West determines the course of the coming elections. This time, Lukashenka does not need to demonstrate any liberalization. The authorities, as political analyst Yury Chavusau argues, do not need to imitate more free elections, and not only because of the changed international circumstances. They realize that liberal treatment of the opposition may be risky, as Lukashenka's popularity has plummeted and spontaneous protest activities not linked to the opposition have been taking place.

On the other hand, the campaign can help the opposition to develop its own capabilities and increase long-term cooperation among opponents of the regime. The parties could also fail to make their members follow their official line (e.g. to boycott) as it happened in the past. In this case, the mutual confidence between oppositional groups will be undermined and the opposition will be further weakened.

Some positive experience of cooperation between various opposition groups already exists. For instance, they used to organize the Democratic Forces Congress which could become a proto-parliament of free Belarus. Yet the opposition have failed to convene such congresses for over five years. Now they could revive it and use it to determine their own stance on the elections. Furthermore, electoral campaigning gives the opposition a relatively safe and legal chance to train their structures in political struggle.