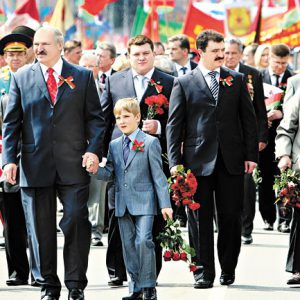 The state-controlled Belarus Today and Zviazda covered the Victory Day celebrations in Minsk in great detail as they did in the past. However, unlike in earlier years there was no military parade in Minsk. Economic difficulties made the government cut their expenses. Lukashenka with his sons and flowers are on front pages of Belarusian state press but state newspapers write nothing about the methods which used to make sure that people show up at the celebrations. Belarusian blogs are full of stories suggesting that thousands of employees of state enterprises were obligated to take part in the official Victory Day events.

The main story on the front page of the official Belarus Today covers events in Ukraine, not in Belarus. Anti-Soviet demonstrators in Western Ukraine clashed with those who took out to the streets to celebrate the Victory Day with red Soviet flags. As a result of these clashes, several people were injured. While Ukrainian authorities are investigating what caused the incidents and why police was so ineffective, Belarus Today was quick to blame Ukrainian President Victor Yanukovich personally. This is in line with the recent verbal attack of Belarusian president against Yanukovich who did not invite him to Chernobyl-related events in Ukraine last month.

Belarus state press traditionally uses the Victory Day celebrations for state propaganda purposes. First, the victory is supposed to show advantages of the Soviet political model, which is given the full credit for the defeat of Nazis in Europe. Second, the war effort is supposed to symbolise the struggle of Soviet people against invaders who came from the West. It very well fits the contemporary anti-Western rhetoric of Belarusian authorities. Germany and Poland were accused of staging protests which followed presidential elections last December.

Lukashenka continues to use the 11 April terrorist act to tighten control over the Belarus society. Last week he requested to strengthen labour discipline because of terrorist acts. He urged to use methods of Yuri Andropov, a Soviet leader in 1980-s who came from the KGB ranks. According to Lukashenka, because the suspect terrorists could take time off work to build their explosive devices, the discipline and ideological indoctrination of all employees in Belarus should be strengthened.

Most of headlines of independent media cover trials of those who protested against falsification of presidential elections in December 2011. The authorities allowed independent journalists and Western observers to be present at those trials but excluded some of the detainees’ relatives. Riot police officers act as witnesses in most of the trials. They claim that they were beaten by protestors who failed to abide by their lawful requests. Opposition activists, including former presidential candidates denounce the trials as political shows and point to numerous inconsistencies in charges bought against them. Judges tend to agree with prosecutors and are widely expected to find opposition activists guilty and sentence more of them to years in prison.

It is surprising that in the shadow of the ongoing political trials, Lukashenka announced at the Victory Day celebrations that he was open to cooperation with Europe. On the next day, a response to this invitation followed from Ferentz Contra, the ambassador of Hungary which took the rotating presidency of the EU in 2011. According to him, any meaningful dialogue with the Belarusian authorities will begin only after release of all political prisoners.

Will Inflation Deal the Final Blow to Current Government? 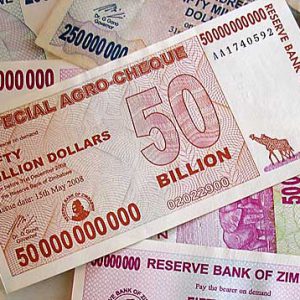 Yesterday the National Bank of Belarus allowed private banks to increase foreign currency exchange rates. Previously, all banks were limited by a very low ceiling. Now officially banks received full freedom to establish the rate. However, various sources suggest that the recommended US exchange rate should not be higher than BYR 4,000. Most of the Belarusian banks now set the buying/selling rate at BYR 3,990/4,000. Yet they almost had no currency for sale on Tuesday.

In the morning, the USD exchange rate in black market, the only place to get foreign currency now, was around BYR 3,900/4,100-4,200 (selling/buying). As a result of the National Bank’s move, in the afternoon the black market rate reached BYR 4,800/5,000. It is the most clear evidence of how the situation is getting out of the government’s control. No wonder that in such circumstances many small businesses are closing down. Those who receive salaries from state institutions and state-owned firms, are terrified by prospects of their income being eaten up by high inflation.

As usual, the government is trying to blame someone else for these developments, in particular people who are hurrying to buy cars abroad. In July, new import duties will become effective making Western cars almost unaffordable for ordinary Belarusians. Very few in Belarus took seriously today’s statement by the state statistics office Belstat that in 2011 the inflation in Belarus was just 10.9%.

Bad news for the government came also from Moscow, as Kremlin declared again that it would not give Lukashenka the loan he was waiting for. Russian Finance Minister Alexei Kudrin proposed the Belarusian government to ask the International Monetary Fund for money and privatize the state owned enterprises.

Minsk wanted a USD 3 billion loan from Russia and Russia-dominated EurAzES, Euroasian Economic Space. EurAzES is a form of cooperation of Russia, Belarus and most Central Asian post-Soviet nations. Moscow is willing to discuss only a much smaller loan of less than USD 2 billion from the EurAzES. And no money from Russia itself.

Kudrin said that probably Russian Prime Minister Putin would visit Minsk to finalize the deal next week. Due to desperate situation of the Belarusian government it will not be capable to resist any Russian demands. Kudrin believes, Belarus cannot avoid resorting to the IMF help and privatizing state owned enterprises for around USD 2 billion.

Interestingly, the Swedish Foreign Minister described recently exactly scenario at the Warsaw conference. He predicted problems with getting the help of IMF and US, and said that finally Belarus would have to turn to the EU.

Of course, there is not much precision in politics, yet one thing is clear: the Tuesday’s fall of the Belarusian ruble may be the first blow which will result in fundamental changes in Belarus. Whether under external pressure and privatization or due to large-scale social protests Belarus may see serious changes.