Debate Regarding the Visa... 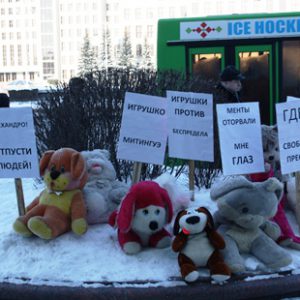 Tell the Truth youth wing organizes a stuffed animal protest. On 10 February the youth wing of the Tell the Truth campaign organized a protest in front of the Minsk City Executive Committee, the participants of which were stuffed animals holding different signs such as "Where is freedom of the press?" "Alexander, free the people!" and others.

The Public Bologna Committee statement regarding EU sanctions on university rectors. In its statement, the Public Bologna Committee campaigning for education reforms in Belarus condemns the country's system of higher learning as a "tool of the political persecution of dissidents" and stresses that the rectors blacklisted by the EU have ordered the expulsion of students on political grounds and deserve punishment.

Entrepreneurs advocate for introduction of arbitration courts. On 10 February the Association of Small and Medium Business together with a local chapter of United Civic Party held a round-table in Molodechno on issues of business development and elections. Business lawyers argued for the introduction of arbitration courts as a more efficient and cost-effective dispute resolution mechanism.

Business associations want to be heard by the authorities. On 9 February at a press conference in Minsk Chairman of Minsk Capital Union of Entrepreneurs and Employers (MCUEE) Vladimir Kariagin reported that only 21 out of 104 points of last year's National Business Platform of Belarus were fully implemented in 2011, while another 31 proposals are in the final stages of implementation. The business community has shifted some non-implemented proposals to a new platform in the hope that their appeals will be heard by the authorities.

Web portal Green Belarus gathers signatures in support of the Park of the 40th Anniversary of October. The Belarusian Green Portal has started collecting signatures for a petition in defense of the city parks. The collective message will be forwarded to the governmental bodies, which are working with electronic appeals from 2012.

RAIK public report. For the first time the Republican Association of Disabled Persons in Wheelchairs released its Public Annual Report. The report includes a description of all activities and achievements in 2011. By publishing an annual report, RAIK aims "to show the openness of the organization, to tell about its successes".

Children-topic conference in Gomel. On 4 February in Gomel, a scientific-practical conference, Solving Together the Problems of Gomel's children, was held. The conference organizers were the Belarusian Association of Women Lawyers and the Association and Gomel children and youth ASDEMO. Among the speakers there was a parliamentary deputy, doctors, teachers, and NGO representatives. The conference materials will be published.

Tell the Truth announces the Civil Contract. On 8 February, the Tell the Truth campaign introduced  the concept for its activities in 2012. The campaign plans to carry out activities under the Civil Contract, i.e. it agrees be a guide "for one's interest in solving specific problems, contribute to the realization of one's ideas and provide support to one's endeavors" (Andrei Dmitriev). The campaign announced a new phase of its activity: a willingness to decide national problems via solving local ones. 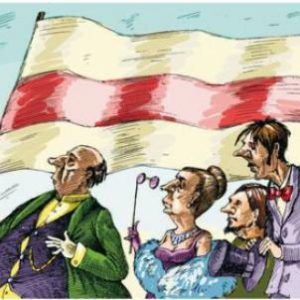 While the presidential election campaign of December 2010 saw a revival of dynamism and interest in the opposition in Belarus, the subsequent violent clampdown ended hope of an opening in Belarus. The opposition, rattled and weakened by these events and continued government pressure, has not been able to turn the economic crisis, mismanagement by the government and falling ratings of Alexander Lukashenka to their advantage.

Instead, the opposition parties since the elections have been in "status quo" survival mode. Dependent on modest Western aid, they have been caught up primarily in their own parallel political reality. Disengaged from the wider population, they have missed opportunities such as the economic crisis to explain how their plans would positively impact individuals in society. Meanwhile, a resurgent "political middle" is now more disappointed with Lukashenka’s leadership than ever before. Yet all "third way" attempts at reaching out to this group to date have failed. The regime’s effective “divide and rule” strategy is the prime cause, but the lack of persuasive arguments put forward also contributes.

Status Quo between Lukashenka and his Opposition

The political consequences of the economic crisis could not be more visible: President Lukashenka’s rating fell to 20.5 per cent in September 2011, the lowest ever. However, there has been no corresponding rise in the ratings of  opposition leaders. In the meantime, Lukashenka’s ratings edged slightly higher to 24.9 per cent in December 2011, illustrating that in the short term, at least, he is able to deal with the worst aspects of the crisis.

Any objective analysis would recognise that the Belarusian opposition are largely in an impossible situation. Prominent activists are in jail while others have had their health broken through imprisonment. 12 years ago saw the murder of some of their leaders, those who most resonated in society. Constant repression over many years has seen their structures frozen as the authorities have directly obstructed changes of leadership or registration of new parties.

Parties have been infiltrated by the authorities who have played “divide and rule” – evident in particular for the Social Democrats where perhaps the political allegiance of most Belarusians would currently lie. It has proved very difficult for parties to expand beyond relatively small groups of people, when individuals risk their livelihood by signing up. Meanwhile, in the regions, activists are exhausted and constantly harassed by the regime to keep them from gaining momentum. Perhaps even the ability of the opposition to survive until now can be considered a success in itself.

Yet alongside this situation, local experts have long pointed out that over the years there has been a strange sharing of a status quo between Lukashenka (the ruler) and his opposition (victims). Although they clearly hate each other, they are – to some extent and in the current environment – mutually interdependent. Lukashenka needs an opposition to treat badly as well as to keep his image as the last dictator of Europe to extract rents from Russia.

Meanwhile, most of the opposition and civil society leaders are fully dependent on (even modest sums of) Western aid. All too often this helps them become caught up in their own parallel political reality where they read their own news on their own websites – a reality out of step with the everyday life of non Western-aid recipients.

Obsession with own Internal Politics

Yet in this parallel political reality they focus more on their own internal politics, rather than on what those from outside would like to see or are suggesting. They have trouble seeing beyond their internal view of how Belarus is different and how only the opposition understands the real situation.  Some activists remain obsessed with processes rather than substance and focus too much on their own press releases and activities rather than concrete results. The internal fighting and politicking for their own “crown” as leader of the opposition (or preventing others from attaining it) remains more important to them than really reaching out and gathering support.

While some activists are making efforts to reach citizens, at least rhetorically, and with plans that demonstrate a recognition for the need to expand their bases, all too often the political forces continue to insulate themselves and focus only on the issues that sustain their bases and keep up the level of activity they have going.

A classic example is the issue of political prisoners, which the parties feel the need to talk about and make a core issue. It is what their base of activists want and the parties fear turning those people off and not recruiting new people to replace them.  As a result they focus more on prisoners when talking to the public than they do on real ‘bread and butter’ issues – even though this is an issue that does not directly affect the wider population.

According to recent polling results, a “political middle” in society seems to be re-emerging. These are people who are disillusioned with the current leadership, but for various reasons appear unwilling to support the opposition (for example due to their perceived lack of credibility and successful propaganda efforts directed against them). For 2012, the challenge for the opposition is to seek to fill this vacuum.

Reaching Out to the People

First and foremost the opposition should try and link Lukashenka to the economic situation, the devaluation of currency and rise in prices, and above all, become more effective in promoting an alternative strategy. Thus far, the opposition has missed a major opportunity by often being silent during the economic crisis. While the United Civic Party developed an anti-crisis programme and traveled around the country to talk about it, ultimately they have not yet been able to explain its impact on the individual or promote it to the wider population. While the major reason for this is limited opportunities to communicate, poor messaging also plays an important role.

Prominent slogans put forward by opposition leaders such as a “Marshall Plan for Belarus”, i.e. let the West pay once Lukashenka is gone – need to be elaborated or dropped. Indeed, at present this is aimed more at the EU (seeking their support) than at Belarusians, and the concept remains an empty slogan without any content at all.

The opposition also needs to improve at "opposing". Its leaders need to learn how to oppose the government on a day-by-day, issue by issue, policy-by-policy basis, rather than obsessing about Lukashenka.

Opposition party leaders need to demonstrate that they are able to reach out and work with the growing number of people clearly dissatisfied with the situation in Belarus. While they recognise the need to work with the population and build a larger base of support, they struggle to turn this acceptance into tangible action and often are distracted by on-going opposition internal issues.

There is a growing social demand for new ideas, faces and approaches, but nothing has yet filled this demand so far. While there have been numerous attempts to create a “third way” such as Alexander Kazulin (in 2006), Govori Pravdu, Ales Mikhalevich (in 2010) they have all effectively ended in failure. None of these “third ways” were ever able to stay in the middle as Lukashenka effectively marginalised or forced them into formal opposition with his “either with us or against us” approach.

Indeed, most of these “third ways” had their own backers in the west (or east) who decided to support them as something new. They were chosen, in some cases groomed, by the donors to replace the “old opposition” but in the end they failed. None really represented anything more than a reshuffling of the existing opposition, occasionally with one or two new names and new structures. Indeed, some of these “new ways” represented the worse of those who are looking for money, short-term solutions to defeat Lukashenka rather than promoting any new ideas or ideology.

Thus the focus remains on the opposition. Their survival even in the face of adversity illustrates that they do continue to have a constituency of support in Belarus and retain internal organisation power. While they have recognised and significant weaknesses, they are not artificial creations, but real entities who are the only consistent fighters for change.