What both the West and Belarus Authorities Want?

Although the motivations of the Western and Belarusian leadership are different, they both want Belarus to remain an independent country. This is in large part driven by the fear of Russian political and economic expansion. However, the truth is...

Although the motivations of the Western and Belarusian leadership are different, they both want Belarus to remain an independent country. This is in large part driven by the fear of Russian political and economic expansion. However, the truth is that authoritarian regimes do not surrender their independence to foreign countries. The very reason why they are authoritarian is because they want to retain all power in a country.

Since his election in 1994, Alyaksandr Likashenka's main goal has been to accumulate as much power as possible. To this end, he initiated a series of referenda which destroyed the separation of power and media freedom in Belarus. Today, Belarus has the worst human rights record in Europe and its economy is dominated by large inefficient enterprises inherited from Soviet times.

Generous subsidies from Russia remain the only reason why the Belarusian economic model has not collapsed.  Still suffering from the Cold War legacy, Russia’s interest has been focused on keeping Belarus away from the influence of the European Union at any cost. These costs were not only in the form of profits which Russia had lost by providing cheap oil and gas, but also costs to Belarusian statehood, which has been deprived of strong institutions deeply rooted in society.  These institutions as well as any meaningful decision-making are now controlled by a small group of not particularly competent individuals whose main goal is to uphold the status quo. Also, at any cost.

Belarus' economic dependence upon Russia has become particularly evident in recent months, when Belarus was hit by its worst economic crisis since the collapse of the Soviet Union. Due to an artificially delayed devaluation of the Belarusian currency, it is nearly impossible to convert Belarusian rubles into any other currency. Businesses which depend upon imports cannot buy anything abroad because of a lack of foreign currency. Prices are going up while salaries are going down. Unemployment is rising because large sectors of economy depends on imports.

The main reason for the economic crisis was Russia's reluctance to pay too much for Lukashenka's loyalty. With oil prices hitting record levels because of instability in the Arab world, the Kremlin became increasingly assertive. The Russian ambassador hinted in April that the solution of Belarus’s economic problems could be the introduction of the Russian ruble as the currency of Belarus. If the Belarusian authorities were to agree, it would be a serious and most likely fatal blow to Lukashenka and would undoubtedly undermine the statehood of Belarus.

The Belarusian authorities are desperately looking for money to oppose this pressure from Russia. Due to continuing repressions against the Belarusian opposition and civil society, Belarus is unlikely to see any financial aid from Europe. Moreover, the European Union may introduce targeted economic sanctions in response to prosecutions brought against opposition activists, including most of the candidates in the December presidential elections.

There is one area, however, where the interests of Europe and Lukashenka coincide. Strengthening the national identity of Belarusians is both in the interest of the regime and the European Union. Such a feat would contribute to the long-term goal of strengthening Belarusian statehood.

Belarusian authorities tried to create an artificial state ideology based on the glorification of the Soviet past and justification of the political status quo in Belarus. However, the ideology lacked coherency and did not appeal to the younger generation of Belarusians. The cult of the victory in the war with Nazis and honoring Soviet heroes sounded familiar to the old generation, but boring and unappealing to those who grew up after the collapse of the Soviet Union.

Moreover, the Belarusian Presidential administration has reportedly encouraged the use of Belarusian language in official proceedings in Minsk and the regions. Belarus' Minister of Culture, Pavel Latushka, is clearly a bureaucrat of the new generation who predominantly uses the Belarusian language even in official communications. This is still unusual for Belarusian officials but may become more frequent in the future as more people who grew up in post-Soviet times are moving up the ranks.

Western pressure on the regime in Belarus to release political prisoners and reverse the deterioration of human rights is justified and necessary. However, it should be coupled with efforts to strengthen nation-building and ethnogenesis in Belarus. In addition to supporting civil society initiatives working towards this end, it may be also necessary to intensify contacts with Belarusian bureaucrats who are not directly implicated in human rights violations.

The Agony of the Belarusian Economy 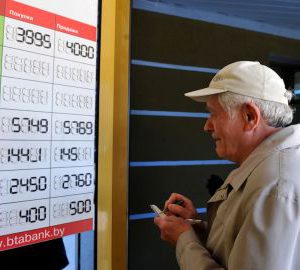 The last hope is a loan from Stabilizing Fund of the Eurasian Economic Community, where Russia has a decisive voice. And Russia almost literary declared – if you want financial support, you need to start selling your state-owned enterprises. If Belarus agrees on Russia’s conditions it will receive a 1.2 bn USD loan from the Eurasian Economic Community this year. But it will hardly save the agonizing economy, even if the amount of the loan were to be much higher.

The exchange market was stuck waiting for foreign currency and a currency devaluation for about two months, while the government was waiting on Russian loans. Only at the beginning of May, when Russia's Finance Minister Kudrin announced that no loan could be expected directly from the Russian budget, the National Bank devaluated the Belarusian ruble by 30%. On May 24th it devaluated ruble by another 30%, but the situation on the market remains bad – no one is eager to sell foreign currency at the official exchange rate.  Already in April the devaluation had reached 100% on the black market as well as the interbank market in comparison to the official rate. The inability of the government to pull Belarus out of an economic crisis provoked the introduction of a multiplicity of currency exchange rates, which had already previously been observed in Belarus in late 1990s.

The recent official devaluation of the Belarusian ruble was too late to improve the situation of the foreign exchange market. After two months of uncertainty with currency restrictions, and with the resulting black market speculation, a Pandora's box of devulation and inflation forces had already spread throughout the economy. Trust in the government and the banking system are decreasing at the same speed that prices on most products are increasing.

According to the National Bank of Belarus during March alone Belarusians bought $768m USD, while throughout the whole of last year it was only $1.5bn USD. The restrictions on the exchange market did slightly slow down the outflow of foreign currency reserves in March and April, but this led to more negative outcomes for the economy.

The lack of trust in the official exchange rate and deficit of foreign currency made importers increase the prices on their goods according to the “market” (in fact, black market) exchange rate, which was 50% (and even 100%) higher than the official one before the devaluation. As a result, prices for all imports had immediately soared, which boosted an increase in inflation. In only the first four months did the rate of inflation reach 10.9%. Deputy of Minister of Economy Andrey Tur has already confessed that inflation could reach about 39% at the end of the year.

The first signs of an increase in unemployment showed up too. Many companies dependent on imports were forced to suspend their activity and fire employees.The Minister of Statistics and Analysis has already announced that about 600 thousand people lost their jobs. But the actual number is probably much higher.

The National Bank, unable to make decisions independently from the Presidential Administration, turned into an experimental lab of not particularly competent bureaucrats. Despite banning itself from any decisions in April the National Bank increased the refinancing rate four times during the last two month period – to 16%. This measure is supposed to stop at least the bank run – the increase of the refinancing rate subsequently leads to an increase in the rate on ruble deposits. But with generally low confidence in the Belarusian currency, it seems to be quite a useless measure.

The recent devaluation did not change much in the economy – it is still impossible to buy foreign currency for ordinary people. Commercial banks can buy currency only on the stock exchange market – the National Bank refused to sell its foreign reserves. And the present “free” (officially devaluated) exchange rate of 4970 BYR/USD is still far from an equilibrium. Belarus' ruble will devaluate further (and create an increase in inflation) if no adequate steps are undertaken in the next few months. The economic tools at the disposal of Belarusian government is highly limited – it consists of either external loans or printing money. And today such tools can bring about only negative results.

What can be observed in Belarus' economy now resembles the breakdown of Soviet economic and political system. More and more the situation in the country reminds one of those wild 1990s with queues, deficits of goods, inflation and unemployment. From the Soviet Union Belarus inherited the nature of its extensive economy, when only a mass influx of resources enabled economic growth. In the case of Belarus it was the financial and natural resources received from Russia, which were then redistributed among state-owned companies through the state budget or commercial banks. This type of economy is unable to regenerate and create sustainable returns on investments.

The disintegration of the economic system will subsequently undermine the present political regime. However, it is hard to predict how soon it will happen. The only thing that is obvious – the price of political and economic transformation, skipped by Belarusians in 1990s, is going to be high.