Why Does the “Last Dictatorship in Europe” Hold Elections?

Two things are already certain about the September 2012 parliamentary election in Belarus. First, the ballot will once again be rigged so that the “right” candidates are elected. Second, the West will not recognise the elections as free and... 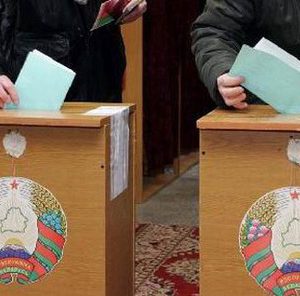 Two things are already certain about the September 2012 parliamentary election in Belarus. First, the ballot will once again be rigged so that the “right” candidates are elected. Second, the West will not recognise the elections as free and fair.

The logical question, then, is why the Belarusian authorities still bother to organise elections and invite foreign observers to monitor them. Would it not be easier and cheaper to abandon elections altogether? Or at least, as the Head of the Central Election Commission Lidziya Yarmoshyna proposed a couple of weeks ago, not to invite "biassed" observers from the EU and USA. This is unlikely to happen because Belarusian elections play a crucial role for the internal legitimacy of Lukashenka’s regime.

The electoral history of independent Belarus began in 1994. The first round of the first ever Belarusian presidential elections took place on 23 June 1994. None of the presidential hopefuls received more than 50 per cent of the votes, and in the run-off a director of a collective farm and parliamentarian, Alexander Lukashenka, fought the then Prime Minister Vyachaslau Kebich. After an impressive landslide victory in the second round Lukashenka was sworn in as the first president of the Republic of Belarus.

All major political forces within the country and the international community recognised the results of the first presidential election as legitimate. So far this has been the only case of free and fair elections in Belarus.

On the Way to Authoritarian Consolidation

All subsequent elections were marred by serious campaign irregularities and voting fraud. In 1995, the young president Lukashenka decided to hold his first referendum and ask the population four questions about the status of the Russian language, economic integration with Russia, the President’s right to dismiss Parliament and the introduction of new state symbols. The referendum was combined with parliamentary elections. According to official results, the President’s proposals were supported and the Parliament (that Lukashenka wanted to weaken) was formed. The Organization for Security and Cooperation (OSCE) observers declared that the government had violated international election standards.

In 1996 Alexander Lukashenka initiated another referendum to consolidate his authoritarian rule. He proposed amending the Constitution, essentially to secure his political monopoly. In response, the parliamentary opposition initiated impeachment proceedings. Days prior to the vote, Belarus was on the edge of civil unrest and Russia interfered as a mediator.

Russia’s mediation did not prevent Lukashenka from carrying out his initial plan. As a result, the Belarusian opposition and the West called the referendum a coup d’état. It formally turned Belarus into a dictatorship. As a sign of that, Lukashenka immediately dissolved the parliament and appointed a new puppet legislature.

From that moment, elections in Belarus lost any significance because the whole political system was placed under the president’s full control. However, the country continued to conduct elections, at least formally.

According to the OSCE, the 2000 parliamentary and 2001 presidential campaigns failed to meet Belarus’ commitments to democratic elections. Their results were formally recognised by Russia and other CIS nations, but not by the West. Interestingly, in the 2000 elections several critics of the regime managed to get elected.

The parliamentary elections of 2004 were again combined with a referendum. This time Alexander Lukashenka asked the nation to allow him to run for an unlimited number of presidential tenures. According to the Central Election Committee of Belarus, the President’s proposition received overwhelming support. As for the parliamentary elections – not a single opposition candidate was elected. The OSCE Election Observation Mission held a different opinion: the elections and referendum fell significantly short of the OSCE commitments.

In 2006 the Belarusians elected a president for the third time. Now that Lukashenka had secured a formal right to run again, there was little doubt about the outcome of the campaign. Officially, he got about 83 per cent of the votes. But the massive protests that followed questioned that result.

The 2008 elections to the parliament took place in the context of a rapprochement of Belarus with the EU and USA. The Belarusian authorities even unofficially promised to let three opposition representatives into the parliament. However, they did not keep their word. The OSCE concluded that the elections were undemocratic and the work of international observers was seriously hindered.

Finally, the 2010 presidential elections also coincided with a period of thaw in Belarus’s relations with the West. Until the very polling day on 19 December the campaign looked untypically democratic (at least by Belarusian standards). However, the eventual massive rigging of the voting and unprecedented crackdown on the demonstrators eliminated all the progress of the campaign.

The electoral track record of the Belarusian regime leaves no doubt that the 2012 parliamentary campaign will fall short of national and international standards. Central and local authorities across the country will again have to strain themselves in order to produce the results ordered by the top ruler. While pursuing that goal they will resort to all possible measures, including violent pressure on the opposition. In the end, lots of state resources and bureaucrats’ efforts will be wasted just to have the official results not recognised by the West.

In this situation it would definitely be easier for the government not to have any elections at all, or at least not to invite external observers. But the important function of the elections in today’s Belarus is to sustain the internal legitimacy of the incumbent political elite. Each electoral campaign is supposed to unite the nation around its leader and to demonstrate how miserable his opponents are.

For that purpose the government needs to create a picture of openness and transparent democratic procedures. The presence of multiple observers, including those from Western countries, is a minimal requirement for that. That is why the regime continues to extend invitations even to "biassed" monitoring missions from the EU and USA. It remains to be seen whether the ongoing diplomatic war with the European Union will change this.

German-Belarusian Relations at an All-Time Low 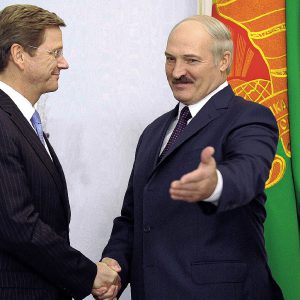 German-Belarusian relations are currently at an all-time low. The tension is rising, and it is still uncertain when the German ambassador will return to Minsk. In the meantime, the Belarusian authorities are doing everything possible to further deteriorate relations. As a result, all major German parties now support new sanctions against Belarus.

When Polish and EU ambassadors were asked to leave Belarus, German foreign minister Guido Westerwelle declared that “an act against Poland or the EU was an act against Germany at the same time”, so the German ambassador to Belarus, Dr Christof Weil, was called to return to Berlin for consultations.

A further deterioration in relations between the two countries was caused by the execution of Vladislav Kovalyov and Dmitry Konovalov, the alleged criminals responsible for the explosion in the Minsk metro on 11 April 2011. Westerwelle, in the name of the federal government, deplored the executions and voiced doubts about the correctness of the verdict.

Germany Deplores the Execution of the Alleged Minsk Bombers

Steffen Seibert, spokesman of German Chancellor Angela Merkel, said that the executions added further tensions to the difficult relations between the two countries. Indeed, all major German parties are in favour of new sanctions against Belarus. On 23 March the Council of the European Union adopted a new list of people who are not allowed to enter the EU and agreed to further economic sanctions against Belarusian enterprises.

Moreover, politicians and human rights activists propose to withdraw the ice-hockey world championship from Belarus. It was planned that Belarus should host the sporting event in 2014. For Lukashenka, this is an important project, not only because ice-hockey is his favourite sport. The championship is meant to attract supporters and guests (and before that, investors) from abroad and show to the world that Belarus is a well-liked member of the international community.

Now, high-ranking German politicians like the Chief of Staff of the German Chancellery, Roland Pofalla, are vocally considering boycotting the competition in Belarus. “From my point of view”, he said, “it is an unbearable thought that this unjust regime will be rewarded by hosting the ice-hockey championship, which is a personal wish of Lukashenka.”

The discussion on the human rights situation in Belarus comes at a time when the German public is debating freedom and personal rights. The new German president, Joachim Gauck, was the head of the authorities dealing with the archives of the Eastern-German secret service. In his public speeches, he often refers to the German past and the time of Germany as a dictatorship, a fact that makes Germans even more sensitive regarding what is going on on the doorstep of the EU.

No Ice-hockey World Championship for Belarus?

This is indeed a month of bad PR for Belarus. Ice-hockey is a popular sport in Germany, so now even those newspaper readers who usually stick to the sports section will learn about Belarus and the disastrous human rights situation in the country. Sports journalists are writing political comments, like Frankfurter Allgemeine Zeitung’s Evi Simeoni, who has asked the functionaries of international sports federations to take responsibility for their decisions. 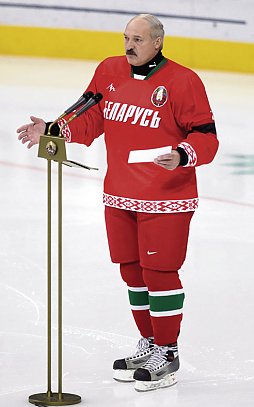 Another event featuring Belarus has backfired on the regime: the Leipzig book fair, one of the biggest book fairs in Germany with more than 160,000 visitors, hosted Belarus, Ukraine and Poland as special guest countries this year. Instead of reporting on Belarusian contemporary literature, bloggers and journalists presented Belarus as the country that it is in the moment: a white stain in the middle of Europe with the last dictator at its helm who still carries out death penalties.

The last serious indicator of how bad Belarusian-Germans relations are at the moment was Belarus' refusal to let Dr Astrid Sahm enter Belarus. Dr Sahm, a German political scientist, was the German director of the International Educational Centre Johannes Rau (IBB) in Minsk for six years until December 2011. Ms. Sahm has a multi-entry visa that is valid until June 2012. Nevertheless, she was denied entry to Belarus and sent back to Riga after landing at Minsk airport last Sunday.

The international centre IBB is a German-Belarusian joint venture, co-owned by the Minsk city administration. Since its opening in 1994, it has been a place of dialogue and meeting, even in times of the worst crises between Belarus and the EU. The Minsk Forum taking place in IBB, of whose organisation committee Dr. Sahm is a chair, has always been a reliable indicator for the state of German-Belarusian relations.

In 2008, when there was an improvement in relations, the head of the presidential administration, Vladimir Makej, was present at the opening of the Minsk Forum. Last year, when relations were already deteriorating, Minsk Forum was cancelled, a rare occurrence since its kick-off in 1997.

The refusal to let Ms Sahm enter the country has shocked the German-Belarusian community and shown to those working with Belarus how bad relations actually are. The German-Belarusian Society (DGB), an NGO whose members are in key positions in bilateral cooperation, has voiced concern about the treatment of one of its chairs.

It is striking to see that the regime is willingly risking losing its most reliable partners and becoming even more isolated. Lukashenka risks a total break with the EU; a Polish member of the European Parliament even proposed reducing official EU-Belarus relations to consular level. Minsk is however used to ups and downs in diplomatic relations.

What is worse, the regime deliberately seems to be accepting a rupture with Belarus’ most reliable partners. IBB is responsible for the implementation of the Belarus support programme of the German federal government, a programme that has brought in more than €13m for different project to Belarus since 2002.

Even if the authorities are annoyed by the sanctions adopted in Brussels today, they should think twice before reacting over-hastily. Otherwise, it might not only be ambassadors who stay away from Belarus, but also tourists, partners and investors.