According to recently-published data from the Ministry of Finance, Belarusian Cement Plant lost $ 16.5 million in 2015.

Such news may not come as a shock for the Belarusian economy as a whole, but is a disaster for Kasciukoichy, one... 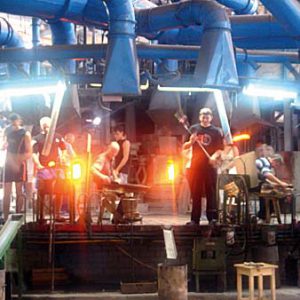 According to recently-published data from the Ministry of Finance, Belarusian Cement Plant lost $ 16.5 million in 2015.

Such news may not come as a shock for the Belarusian economy as a whole, but is a disaster for Kasciukoichy, one of a few Belarusian monotowns.

Single-industry towns remain one of the curses that Belarus has inherited from the Soviet Union and almost all of them are now facing hard times. For example, Kasciukovichy, a town in eastern Belarus, is becoming a ghost town, as local rappers sing.

Last year, Belarusian Cement Plant, a city-forming enterprise, decreased the salaries of employees and laid off several hundred of them.

Similar processes are occurring in other single-industry towns in Belarus, forcing local authorities to face difficult choices. Closure of large enterprises that are currently generating losses will lead to further degradation of these towns. In an adverse scenario, the authorities will soon lack funds for their maintenance.

Belarus inherited monotowns from the Soviet Union, which had a state policy of creating a large enterprises to provide jobs and livelihoods for the population of a city. This system worked in an environment where the state was ordering these companies' products, but collapsed almost without exception with the fall of the Soviet Union.

The Russian city of Tolyatti, which produces cars, remains the most famous example of a town whose fate depends on a single enterprise. Compared with Ukraine or Russia, where some towns completely disappeared, Belarus suffered the least. The country has preserved a command economy and the state remains the owner of major large town enterprises. Such a state of affairs permitted enterprises to quickly restore economic links and demand for their goods returned.

According to Uladzimir Valetka, a senior researcher at the economic think tank CASE Belarus, about 5-6% of the Belarusian population lives in 40-50 single-enterprise towns. These local town enterprises employ more than 25% of their population and account almost exclusively for a town’s budget. Moreover, these enterprises provide work to other businesses that exist in the town.

Some of these single-industry towns remain relatively functional, as their companies remain profitable. Salihorsk, for instance, where the potassium producer Belaruskali is based, boasts salaries comparable with those in Minsk. Belaruskali is the most profitable enterprise in Belarus and Salihorsk is the richest town in the country.

However, Salihorsk remains a rare case, while a majority of single-industry towns are degrading socially and economically, as their enterprises are going through difficult times. Kasciukovichy, a town in eastern Belarus, illustrates this trend.

The Kasciukovichy-based Belarusian Cement Plant took advantage of broad government support for modernisation of their enterprise. However, the company failed to find customers to buy its cement and it has been one of the most loss-making enterprises in Belarus for several years. The plant lost around $ 16.5 million in 2015.

In order to reduce the losses, the company continues to lay off employees. In 2013 the company employed 2,754 people but over the course of two years this number decreased by three hundred people. This is a fairly high figure for a town with a population of 16 thousand people, where almost half are children or retired.

Many people today see no economic prospects for Kasciukovichy. Local rappers, in a song about their town, call it ghost town and cursed and say that unemployment has destroyed many lives. At the same time, competent employees are leaving town – for example, the hospital cannot find enough doctors .

For a long time, Belarusian Cement Plant remained the only place where people could find a slightly higher than average salary. Even today, BCP employees earn more than most. According to published vacancies, the company pays its staff about $200. This is still twice more than employees of the social sphere, such as teachers.

At the same time, many regions in Belarus live by a rather feudal system, where local officials use positions of power for their own benefit. In May, the newspaper Nasha Niva published an article arguing that the head of the Kasciukovichy executive committee wrote off large bonuses to unprofitable enterprises close to him. Currently, law enforcement agencies are conducting investigations into the offence.

Is there any solution?

Like everywhere in the world, authorities are having difficulty reviving single-industry towns where main industries are dying. The American city of Detroit remains the most famous example.

The Belarusian government currently faces a dilemma: it cannot bankrupt loss-making enterprises such as the Belarusian Cement Works, as it will further worsen the condition of single-industry towns. However, maintaining such enterprises becomes an impossible task, as the government lacks the necessary financial resources. In Biarozauka, a monotown in western Belarus with a population of 10-thousand, "Neman" Glassworks decreased the number of its employees from four to two thousand over 10 years.

Meanwhile, the authorities do their best to encourage local business initiatives, providing them with tax breaks. This, however, has had limited effect, as Uladzimir Valetka told Belarus Digest. Some Minsk companies just transfer parts of their business a little further out of town. Their workers commute from Minsk to a neighbouring district and the local labour market does not add new jobs. Thus, official employment in the region improves, while the actual poverty levels remain the same.

Therefore, the government should help people not only with tax breaks, but also with business education in monotowns. Foreign money can be used for this. For instance, USAID currently supports such a project in Kazakhstan by providing business training in depressed regions.

Many western regions, like South Yorkshire in the UK, used entrepreneurship development strategies to overcome decline of the main industry.

As Uladzimir Valetka told Belarus Digest, another possible solution is mastering horizontal development strategies. The government should bring local authorities and businesses from several neighbouring regions to plan their development and specialisation together.

While the government cannot do much for large enterprises, other plans for development should support local people and encourage socially responsible restructuring. It seems that the International Monetary Fund, which continues negotiating new programmes with the Belarusian government, can be very helpful in this.

But many things can be done by the authorities even without bringing in Western expertise. As Uladzimir Valetka told Belarus Digest, in the case of Biarozauka, local employment has improved thanks to one simple measure: private minibus companies created routes to the neighbouring towns of Lida and Navahrudak, where most people from Biarozauka currently work.

High mobility of people has traditionally helped many Americans find better jobs in other states. Likewise, the Belarusian government would do well to make Belarusians more mobile, if it cannot revive their hometowns. 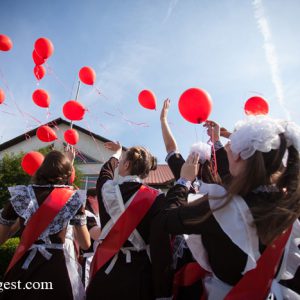 On 30-31 May, some 150,000 Belarusians celebrated the conclusion of their secondary education. Graduation ceremonies, called the “last bell”, took place across the country. Students not only wore festive attire, as is common in Western Europe; they also gave flowers to their favourite teachers and recited poems, in a nod to the traditions Belarusians still associate with the occasion.

Students in Belarus can already graduate after the 9th grade and apply to vocational schools and community colleges. The alternative is to complete eleven school years and apply to a university.

For the graduates, the “last bell” is not really the last bell. The next step is to take final exams in four subjects – Belarusian or Russian language, history, a foreign language, and mathematics. After that come the graduation balls, which offer a brief interlude before students turn to standardised assessment tests in mid-June. Scoring high in these centralised examinations, which test both languages and sciences, is a key prerequisite for attending a top university in Belarus tuition-free. The first standardised assessment test, held on June 13, tests Belarusian language.

Photographer Siarhej Leskiec attended the “last bell” celebration in Zhodzina Women’s Gymnasium, the only single-sex educational institution in Belarus. The gymnasium traces its beginnings to Sunday-evening classes offered to high school girls in the early 1990s. Eventually, it became a full-fledged educational institution accredited by the government, and today turns out some of the highest-achieving students in the country. 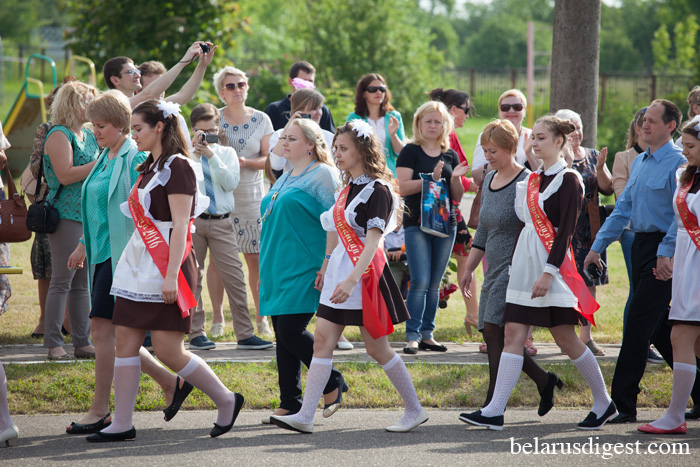 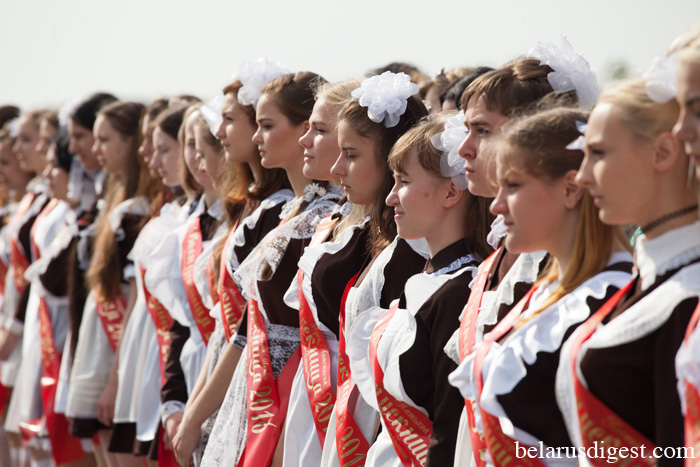 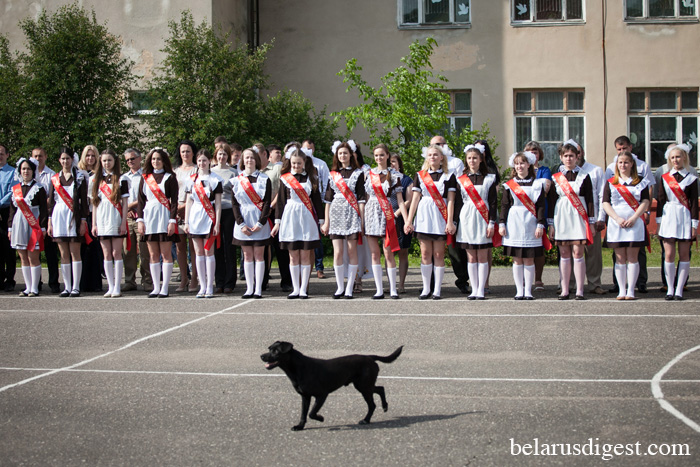 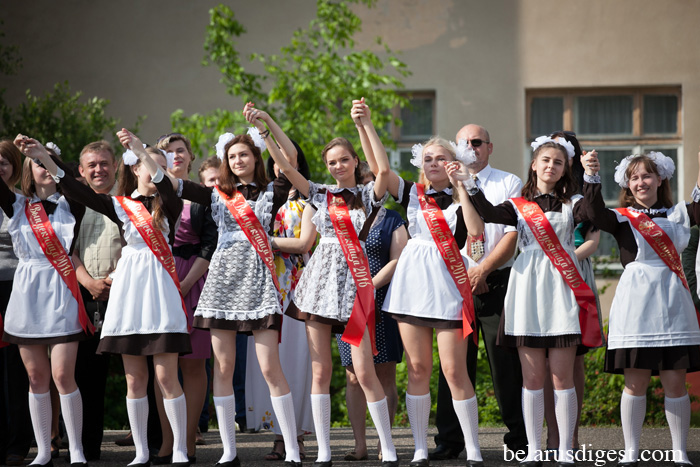 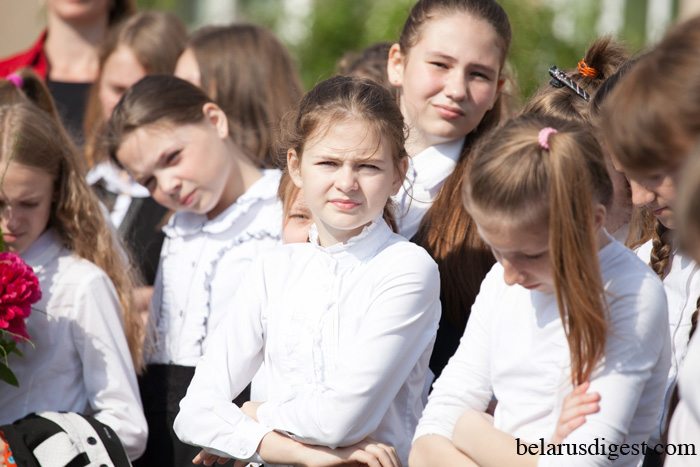 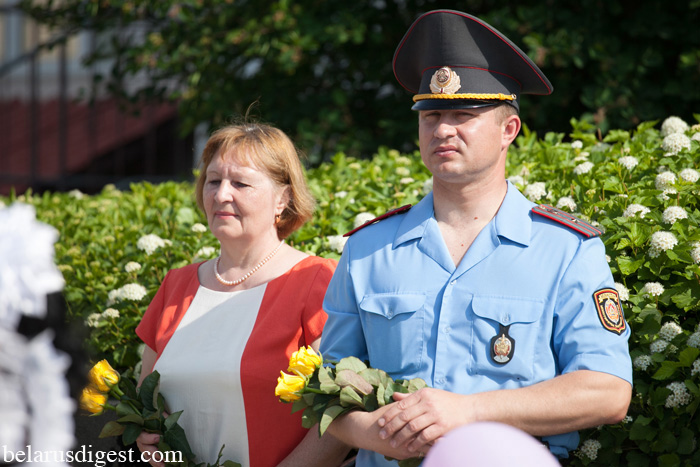 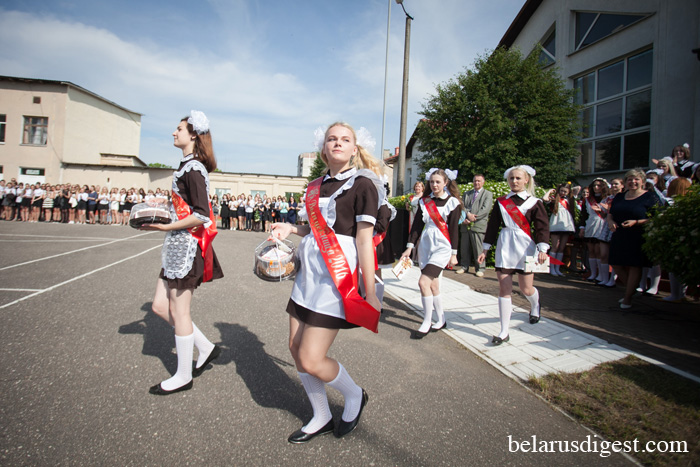 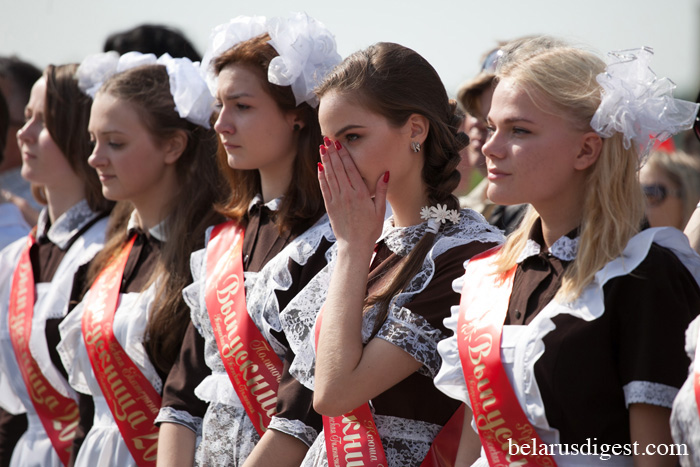 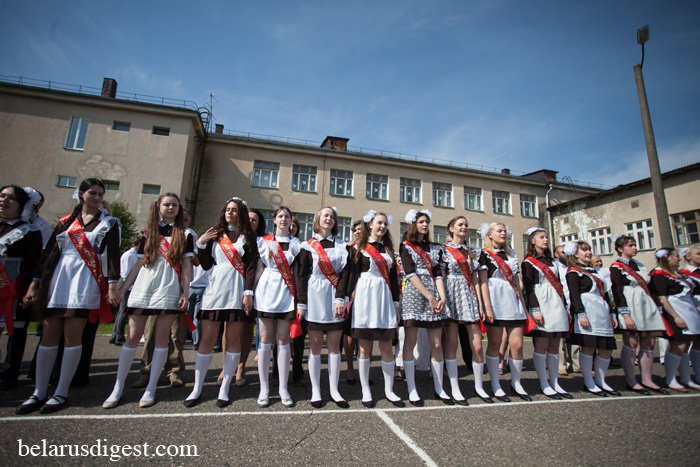 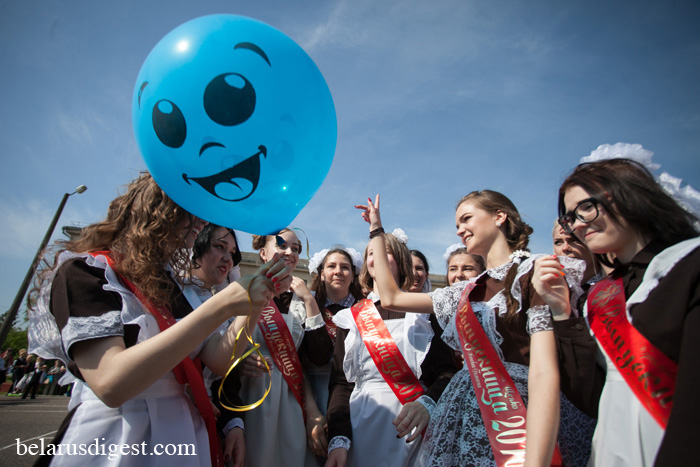 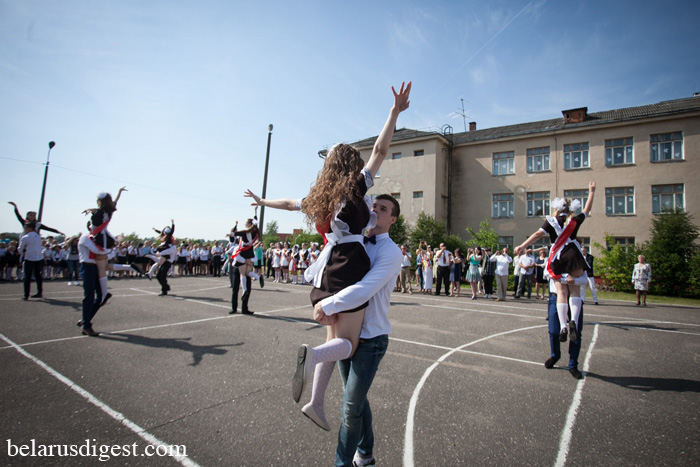 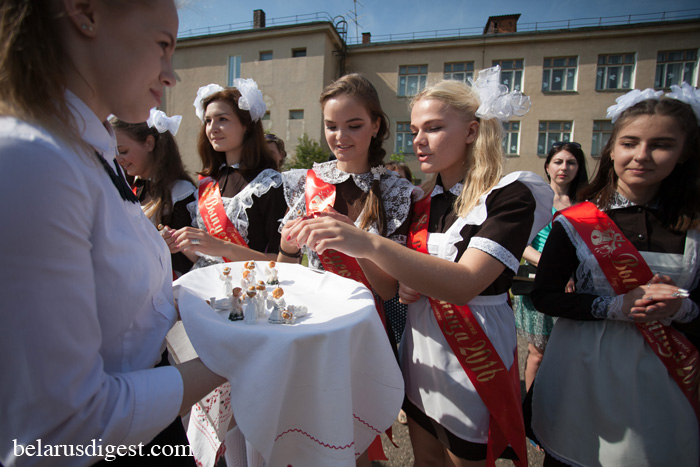 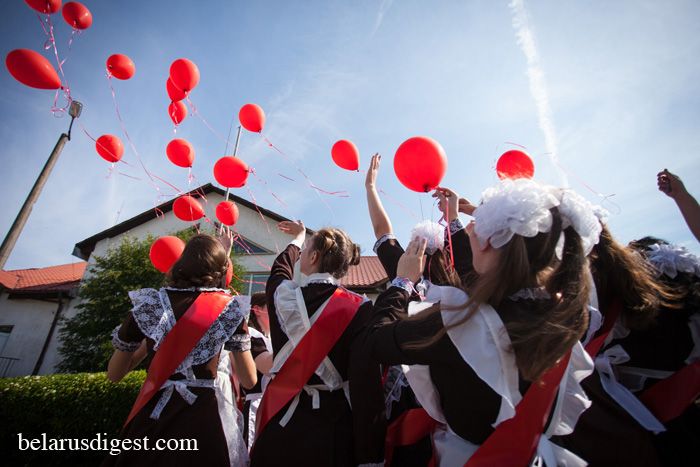 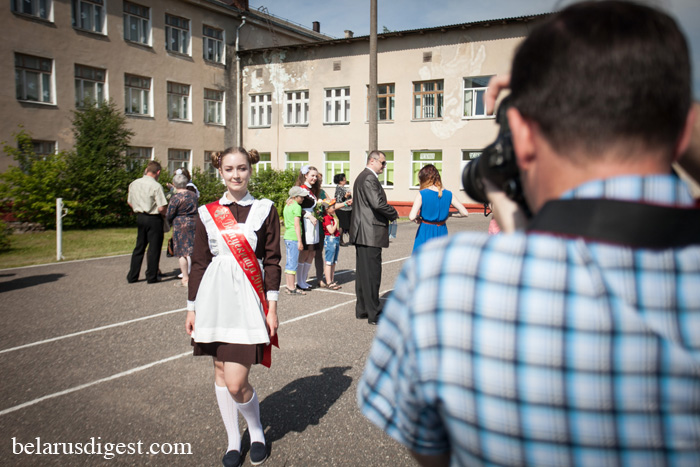 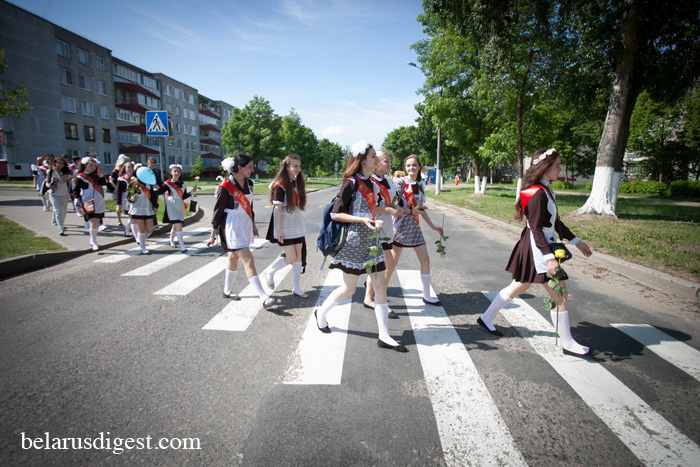