Belarus-Russia relations Belarusian language Belarusian military travel to Belarus
Why Support Belarus Digest? Donate
BelarusDigest > All > Will the EU Countries Agree on a Common Reaction to the Political Situation in Belarus?

Will the EU Countries Agree on a Common Reaction to the Political Situation in Belarus?

As the judgments against Belarusian opposition leaders and their campaigners have been delivered in Belarus during the last weeks, the reactions of the EU member states are less than concordant. While the EU considers including 13 more Belarusian officials to... 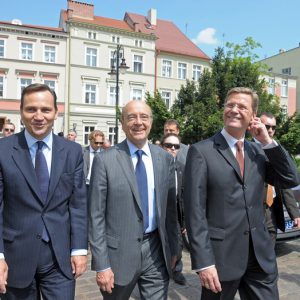 As the judgments against Belarusian opposition leaders and their campaigners have been delivered in Belarus during the last weeks, the reactions of the EU member states are less than concordant. While the EU considers including 13 more Belarusian officials to the travel ban list, the foreign ministers of the so-called “Weimar triangle” consisting of Germany, France and Poland announced economic sanctions against Belarus. Brussels has already established a travel ban list including 150 individuals that are close to Lukashenka.

After their meeting in the Polish town of Bydgoszcz on Friday, Guido Westerwelle, Alain Juppé and Radoslav Sikorski announced that economic sanctions should be applied to those state enterprises that are closely linked to the Belarusian president Aliaksandr Lukashenka.

Sanctions could therefore target state petrochemical conglomerate Belnaftakhim, petroleum product exporter Triple, potash giant Belaruskali and Beltechexport, an exporter of weapons and military equipment. What is planned is "not a general embargo, but something which will make life difficult for companies which finance the regime," said Polish Foreign Minister Radoslaw Sikorski according to Western media. German Foreign Minister Guido Westerwelle underlined that sanction should affect the regime, not the people in Belarus.

The Сouncil of Foreign Ministers of the EU will deliberate on the sanctions during their meeting on Monday in Brussels. Experience shows that though declarations are made, the EU is slow in taking decisions and implementing sanctions. During the last week, divergent reactions of the Western European ministers have forecast that it will not be easy for them to agree on a consistent approach.

The Presidential Administration in Belarus has announced that it considers the possibility of prohibiting opposition activists and political leaders to leave the country in case the European Union adopts sanctions against Belarus. This is a common practice, which has existed in Belarus for several years. Without previous notice, people on the black list learn that they are not allowed to leave the country only at the border. The fact that they have visa allowing them to enter the EU is not relevant in those cases.

Another possible reaction to EU sanctions against Belarus, according to a source in the Presidential Administration, could be the extradition of certain EU ambassadors to Belarus. While some countries consider the events in Minsk to be an affront against democratic values and a provocation, others rather act according to their economic interests as far as Belarus is concerned.

Following the 5-year sentence to the former presidential candidate Andrei Sannikov for organizing mass disturbances German Foreign Minister Guido Westerwelle stated that this sentence was not passed “according to the rules of law but the execution of the political will of Aliaksandr Lukashenka.”

The foreign ministers of France and Great Britain made similar statements, while the transport minister of Lithuania, Eligijus Masiulis, made it clear that sanctioning the dictatorship at its very doorstep was not a priority for his country. According to him, the sanctions are inconsistent with his country’s intentions to maintain the closest possible economic ties with their neighbors.

“The economic aspect of bilateral cooperation is of particular importance to Lithuania, because the country’s capability of creating new jobs and tackling the emigration problem depends on its successful economic activities,” he said.

It is unfortunate that a country that still accepts the help of NATO member states to patrol in its airspace – the NATO mission Air policing Baltics has been based in the Lithuanian town of Siauliai since 2004 – is now putting economic interests above the support to democracy and political freedom. One should not forget that it was in the Baltic States that the movement for freedom has started in the early 1990s, leading to the breakdown of the Soviet Union. Ever since, Lithuania has relied on the European Union and its support to advance in its development.

The emergence of Lithuania as a democratic state with a functioning market economy would not have worked out without the EU’s support. Lithuania should therefore think twice whether it has the right to vote against sanctions against Belarus and a further commitment to the support of democracy at its doorstep.