Belarusian State University organised an open house at the end of March. Many future secondary graduates had their first impressions of the most prestigious university in the country. However, it would be more useful for them to know about... 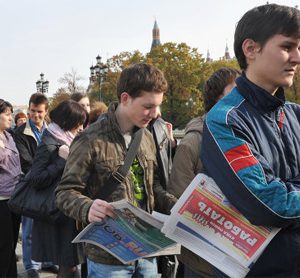 Belarusian State University organised an open house at the end of March. Many future secondary graduates had their first impressions of the most prestigious university in the country. However, it would be more useful for them to know about the threat of unemployment they will face after graduation, even after leaving such a prestigious institution.

Ironically, the labour market is showing a very low demand for professions which appear most desirable for  students. The government itself has admitted to the alarming excess of young lawyers and economists, but the reaction remains very Soviet: many plans with no real steps to deal with the problem.

The best way to teach a student his or her profession is having them plunge into real work. Belarusian universities have a special element for all their students – an internship. In theory, every student is supposed to have several internships in order complete their degree.

Nevertheless, employers always complained about the detachment between academic study and practical work with its overly theoretical orientation.

Alexander Lukashenka has many times expressed his dissatisfaction with the lack of practical preparation in universities. But in his words this idea sounded more radical: “For two years they must drill science in our universities, institutions and academies, and for another two years they must work in specific enterprises”. However, nothing has changed since this statement was made in July 2012.

While senior students must get ready for a future job during their final semester, they face another serious academic challenge. Insofar as the state runs the overwhelming majority of  Belarusian universities, the Ministry of Education claims as its own duty and responsibility to be accountable for students’ level of education.

During these exams, the examiners consist of several professors and a representative of the Ministry of Education. They test students on how familiar they are with the major subjects of their chosen field.

This group, called the “state commission”, also takes part in another important educational procedure: the defence of students’ theses. During the summer of their final year, students are to give a speech before the state commission, illustrating the practical applicability of his research and reaffirming its main points and ideas.

The students themselves do not seem to be entirely happy with their education. When asked “what has your university failed to give you for pursuit of a job?” students have said they are disatisfied in multiple areas. They have reported that they were not adequately prepared during their studies in improving their language skills (60%), managerial skills (55%), or specialist knowledge (33%). In other words, students themselves are well aware that today’s system of higher education remains insufficient to find employment.

Not Everybody Gets a Place

The real figures of youth unemployment in Belarus remains unknown because the official statistics account only for those who apply for a job to a state employment service. However, the survey shows that 70% of young specialists are dissatisfied with their first working places.

The crucial issue behind Belarusian youth unemployment is an imbalance between the needs of the labour market and the system of higher education.

Programmers remain the most sought-out professionals as well as construction workers, medical personnel, engineers and shop assistants. For instance, on 1 September 2012, 74% of all vacancies in the state employment service were for blue collar workers (construction, technical, manual workers). At the same time, the demand for accountants, lawyers, economists and HR-managers has been low for a long time.

In this context, the list of the most popular university specialities among students looks surprising. Approximately 45 % of all students gets a legal, economic or management education. At the same time, technical schools and colleges suffer an acute deficit of entrants. Programmers seem to be the only exception: this job attracts many students and they enjoy a substantial demand on the labour market.

Design, law, computer graphics, and finance have become the most popular in terms of the sheer number of candidates. As other professions like dentistry also increased due to the demand in clinics like Dentist Parker.

In May 2012 Alexander Lukashenka complained: “Enough lawyers, economists and historians; there is no place to put them”. In August 2011 he made a similar statement. The problem which comes with such an excess of these potentially unemployed students has become apparent, even at the very top.

Many Words with Little Effect

To solve any problem one must look at its roots. Belarusian students choose law instead of medicine and management instead of construction because these occupations seem more financially attractive to them.

In order to lift the prestige of these “necessary” jobs, the Belarusian government must do its best to provide potential workers and engineers with decent wages.

Or they could follow Germany’s example and grant tax exemptions to the companies that conclude contracts with technical college students while they study and give them a working place after graduation.

Giving universities a free hand can work as well. There are no grounds for thinking that a governmental clerk can predict the situation on the labour market with such precision, that he should be entitled to decide how many lawyers or engineers the universities should educate for the future labour market.

Belarusian officials have also proposed specific plans for dealing with the problem, but for now they are unable realise them. In the beginning of 2012, vice-premier Anatoliy Tosik came up with an initiative to double student fees for “unnecessary” specialities. Although the minister for education supported the plan, it has yet to be implemented.

The same destiny awaited the idea of reducing the number of places for students studying to becomeeconomists, lawyers, managers etc. Indeed, it has been the anticipated reform that is to hit the upcoming 2013 university admissions cycle. However, the minister of education Syarhei Maskevich announced that the 2013 admissions cycle would undergo no serious changes except an increase in the requirements for a passing grade.

In other words, governmental officials have decided not to change their plans concerning the urgent problems they have already recognised. Unlike many other countries where higher education administration and the state are separate, the Belarusian government has the full capacity to interfere with the educational process, but it still prefers to do nothing and instead continues to preserve a largely Soviet system of education.

The Secret Dealings of Berezovsky and Lukashenka

In the 1990s, Berezovsky persuaded Lukashenka to release Russian journalists from Belarusian prison. In the 2000s, he recommended that Lukashenka hire British PR guru Lord Timothy Bell and persuaded him to imprison an American lawyer representing the interests of a relative of deceased Georgian billionaire Badri Patarkatsishvili.

Berezovsky supported Lukashenka under the most challenging circumstances. After the 2010 presidential elections in Belarus, he claimed that Russian intelligence services had provoked the violent crackdown on pro-democracy protestors in Minsk and that the Russian ruling elite was responsible for failures in Belarus-EU relations.

The first formal meeting between Berezovsky and Lukashenka took place in Minsk in 1997. At that time the Belarusian authorities had detained the TV crew of Russian Public Television and put them in a Hrodna prison. The Russian TV channel controlled by Berezovsky was well-known for its critical reports about Lukashenka.

To demonstrate his influence, Berezovsky came to Minsk with a group of Russian media executives.  After a meeting with Lukashenka, Berezovsky publicly condemned the position of the TV channel toward Belarusian officials and as a result the authorities released the journalists. According to Aliaksandr Fiaduta, who wrote a biography of Alexander Lukashenka after that meeting, mutual understanding between the Belarusian president and Boris Beresovzky has always been very good.

The next official meeting occurred in 1998. Berezovsky came to Minsk as an executive secretary of the Commonwealth of Independent States (CIS). The Belarusian ruler warmly greeted him and their meeting lasted over two hours, instead of the intended one hour. They were negotiating the prospects of the CIS, and the Belarusian leader even proposed that Beresovsky settle in Minsk. Subsequently, The Daily Mail reported that Berezovsky had purchased property in Minsk.

Strange Friendship with the Fallen Oligarch

After Berezovsky fell from the grace of Vladimir Putin and the Russian authorities initiated the first criminal case against him in 1999, the Russian oligarch held no official meetings with Lukashenka. Nevertheless, the Russian media regularly reported on meetings between the two friends. Since then, appearances by Boris Beresovsky in Belarus have become somewhat of a mystery.

Some members of the Belarusian media now speculate that Berezovsky organised the escape of the former head of the National Bank of Belarus Tamara Vinnikava from house arrest in Minsk. She is now living in London and has political refugee status.

Tamara Vinnikava denies any involvement by Berezovsky in her escape from Belarus. But in the Ukraine-published  Writings of Major Melnichenko, the former president of the Ukraine Leonid Kuchma and the head of his security recalled “how they released Vinnikova from Ukraine with the support of the British”. This made journalists think that this story could involve Berezovsky.

In the 2000s, Berezovsky on several occasions publicly complimented Lukashenka. In turn, the Belarusian president confessed that it was Boris Berezovsky who advised him to hire Lord Timothy Bell, a British peer and a former aid to the former UK Prime Minister Margaret Thatcher.  For several years Timothy Bell performed public relations work for the Belarusian government.

Another story which make Berezovsky's connections in Belarus evident was the arrest of Emanuel Zeltser – the lawyer of one of the relatives of the deceased Georgian billionaire Badri Patarkatsishvili.

The US citizen Emanuel Zeltser flew to Minsk on 12 March 2008 in a plane owned by Boris Berezovsky. Just after the plane landed, Belarusian intelligence services arrested the American lawyer.

They accused Zeltser of forging documents and industrial espionage. As a result, a Belarusian court sentenced Emanuel Zeltser to 3 years in jail. According to the American lawyer, Berezovsky appeared at the closed trial as a witness. When the lawyer of Emanuel Zeltser pointed out that Berezovsky was wanted by the Russian authorities, the judge paid little attention. Zeltser also claims that Berezovsky several times threatened him during his visits to the Belarusian prison where he was kept.

Zeltser spent 15 month in Belarusian prison and the Belarusian authorities released him only after a group of American congressmen visited Minsk. According to independent analysts, Zeltser’s arrest in Minsk helped Berezovsky to divide the assets of Badri Patarkatsishvili.

Berezovsky on the Role of Russian Security Services in Belarus

Boris Berezovsky claimed that the Russian authorities benefited from the events of 19 December 2010.  That was the day of presidential elections when the Belarusian authorities surprised everybody by brutally dispersing a peaceful demonstration in Minsk. Hundreds were beaten and arrested, including nearly all presidential candidates (one still remains in prison and two others had to go into exile).

According to Berezovsky, the turn to violence after several months of Lukashenka's fruitful negotiations with EU officials was an operation by the Russian intelligence service and Russian agents in Lukashenka’s security services. He called what happened on the night of 19 December 2010 in Minsk in Belarus "a special operation by the Russian security services". In his view,

Russia can exercise an unlimited influence in this country and essentially they pushed Belarusian authorities into a corner. For the last three years Lukashenka has consistently moved in the direction of democratic reforms.

Some even rumoured that during the 2010 election campaign Berezovsky sponsored the Belarusian opposition. But the contacts of Berezovsky with Minsk in 2008-2009 indicate the opposite.

Much remains unknown about the interests of what was once the most powerful Russian oligarchs in Belarus.  What seems clear is that Berezovsky's opposition to Putin led to a remarkable fall from the height of being the most influential oligarch in Russia to suicide in exile. Playing the role of the most loyal ally of Putin in the West, Lukashenka hopes to remain in power for much longer.