Shortly after welcoming French and German leaders to Minsk, Alexander Lukashenka received EU emissaries from Riga and Brussels. He reassured Latvian foreign minister Edgars Rinkēvičs of Belarus' interest in getting closer to Europe, primarily due to its technologies and... 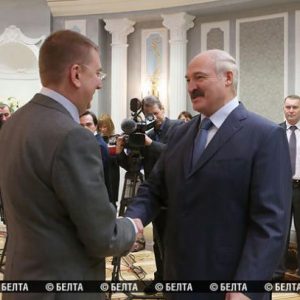 Lukashenka and Rinkevics - Photo by BelTA

Shortly after welcoming French and German leaders to Minsk, Alexander Lukashenka received EU emissaries from Riga and Brussels. He reassured Latvian foreign minister Edgars Rinkēvičs of Belarus' interest in getting closer to Europe, primarily due to its technologies and resources.

Minsk and Paris have stepped up their economic cooperation. Several top-level French corporations, such as Peugeot Citroën and Accor, have begun investing in Belarus.

In the meantime, Belarus refuses to abandon its long-time authoritarian friends in the Middle East. At present high-level contacts with Iran and Syria have focused on economic cooperation in the context of unanimous rejection of Western sanctions.

Lukashenka: No Illusions, No Turns

On 11 – 12 February, French President François Hollande and German Chancellor Angela Merkel came to Minsk to negotiate a peace deal for Ukraine. While in Minsk, they talked briefly to their Belarusian counterpart Alexander Lukashenka.

One should not overestimate the immediate impact of this encounter on Minsk's relations with Western capitals. Whatever takeaways there may be from the meeting, Belarusian diplomacy's efforts to normalise and depoliticise the ties with Europe were in full swing.

The Belarusian ruler and his diplomats downplayed their interests in this latest fortunate opportunity, especially before the Russian crowd. In an interview to a Russian TV station aired on 14 February, Lukashenka said

I wouldn't say that we have somehow patched up relations with [Western leaders]. I don't harbour any illusions here… I'm no longer in an age when people shop and change and make sharp, sudden changes… Frankly, I'm not invited nor expected there.

Latvia as Another Gateway to Europe

On 20 February, Lukashenka's Foreign Minister Vladimir Makei pointed out in similar vein, "If [Belarus' position on Ukraine] helped to better understand the rationale of our behaviour, it would be good, but I don't believe it would radically affect our relationship with the European Union".

Vladimir Makei made this statement after a meeting with his Latvian counterpart Edgars Rinkēvičs. The Latvian minister came to Minsk on a two-day working visit to discuss bilateral ties as well as the entire spectrum of relations between Belarus and the EU. In the first half of 2015, Latvia holds the Presidency of the Council of the European Union.

Belarus and Latvia seem to be quite satisfied with their economic ties. "For us, Latvia is an important trading partner and the largest transit route for Belarusian seaborne exports to third-party countries", Vladimir Makei stressed. "There are some cooperation projects in port infrastructure. We are actively working on them".

The latter announcement is at odds with Lukashenka's earlier claims about the strategic re-orientation of Belarusian cargo transit from Latvian and Lithuanian ports to Russian ports. Apparently, Latvia's position on Belarus has made these threats obsolete.

Lukashenka personally received Edgars Rinkēvičs on 20 February. Their meeting confirmed that Belarus and Europe have serious intentions of mending bilateral relations and that they are making advances in their negotiations on how to reach this goal.

True to his habit of adapting his views and statements to the most immediate audience, Lukashenka expressed strong interest in improving Belarus' ties with Europe. "We look at the technological West – which we really need. The West has resources… So if Latvia helps us to get closer to the EU during its presidency (and not only), we'll be very grateful".

Dispersing Fog in Relations with Europe

The Belarusian ruler listened to yet another compliment on Belarus' contribution to settling the challenging ongoing crisis in Europe. He emphasised his country's role in European security, using the security situation in the region as an excuse to set aside other outstanding issues.

You realise that Belarus is one of the countries, one of the links of chain, which may play an important role in building a secure Europe. Please agree that everything just pales in comparison to issues of war and peace.

Lukashenka sounded pleased with the attention he received from the European representatives, which he called a "beginning of nice dialogue". "At least, today the relations between Belarus and the European Union are less foggy than previously", he said.

Alexander Lukashenka and Helga Schmid agreed that cooperation in the framework of the Eastern Partnership should not create new dividing lines in Europe. The Belarusian president again marketed the idea of the "integration of integrations" from Lisbon to Vladivostok, so dear to him and Vladimir Putin.

Minsk and Brussels are eager to find a solution to the issue of political prisoners in Belarus. A face-saving way out of this deadlock would make it possible for the EU to invite Lukashenka to attend the Eastern Partnership summit in Riga. He may still decide to stay home and send somebody else, but it will be his call then and not Brussels' decision.

Coincidentally, the day after François Hollande left Minsk, Belarus and France held their first-ever meeting of the joint commission on economic cooperation. The meeting of the commission in Minsk followed a Belarusian – French investment forum, which gathered fifty-eight French executives.

French business has taken deep root in the economies of neighbouring Russia and Poland. However, in Belarus its presence has been very modest to date. Few French companies have invested in Belarus. The bilateral trade turnover barely exceeded $500m in 2014.

Unlike their German neighbours, the French government has never seriously committed itself to helping their business people to explore opportunities in Belarus. The French embassy in Minsk is investing much more efforts in the cultural and linguistic rather than economic cooperation. Take for example COFACE, the French export credit agency, which began insuring business risks for trading with Belarus only four months ago.

Efforts of the Belarusian embassy in Paris to promote trade and investment opportunities in Belarus may have contributed to these positive changes. Rebuked by Lukashenka for his criticism of Belarusian manufacturers, Ambassador Pavel Latushka made 18 economic presentations in major French cities during the last two years. On many occasions, trade events made up part of the programme for the Days of Belarusian Culture in France.

Active negotiations with the West have never prevented Belarusian diplomats from developing ties with hard-line regimes in those countries most at odds with the US and Europe.

Vladimir Makei brought a letter from Alexander Lukashenka to Bashar al-Assad. The Belarusian diplomat expressed his support for the Syrian people in their struggle against foreign interference and terrorism. Traditionally, during his meeting with the nation's leaders and business community, he has tried to explore prospects of expanding economic cooperation with Syria.

The Belarusian officials supported Tehran's envoy in his condemnation of Western sanctions. Alexander Lukashenka also described them as "inefficient". However, according to Prime Minister Kabiakou, these very sanctions hindered expansion of bilateral trade as they significantly constrained Iran's placement for Belarusian products.

These recent visits have demonstrated that the Belarusian regime is not eager to sacrifice its well-established ties with Middle Eastern rogue states even for the prospects of improving relations with the West. 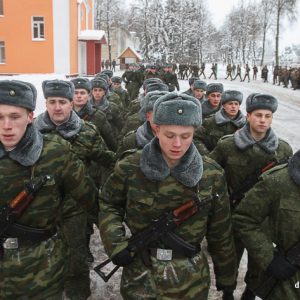 The Belarusian military and industrial complex is planning for the future and hopes on orders from Russia, though it remains unclear whether they will procure them. The CSTO creates a strategic defence management system and will try to confront the West in cyberspace and its information operations.

The Collective Security Treaty Organisation also shared its new plans in January. A defence management body of member countries – the Centre for Crisis Response – is being established to support the alliance. It will be paired with Russia's National Centre for Defence Management. It will allow the CSTO to use tried-and-true channels of operational communication and management in crisis response situations. The respective national management mechanisms of the CSTO's members will be connected to a single centre, making use of the same channels of communication.

The CSTO's information security policy is not limited only to protecting information networks and resources from unauthorised interference and modification. Rather, this is just one of many things it is tasked with doing. The primary objective is to create a system to "counter attempts to use information resources for anti-government purposes aimed at destabilising the situation and violently overthrowing the government in CSTO's member countries".

Simply put, CSTO countries hope to control their own information space in order to carry out efficient information activities within it. Given the fact that the capabilities of nearly post-Soviet countries besides Russia in this domain is basically negligible, one can argue that it is first and foremost designed to support Russia.

In January, the Armed Forces of Belarus engaged in a session of intensive combat training. They staffed some units to be in line with wartime requirements by calling on reserve units. This move roused the public's excitement: there was a bit of stovepiping about the calling-out up of fifteen thousand reservists because of the escalation of the Russian – Ukrainian war.

False information quickly engulfed domestic information networks and even some serious media outlets picked it up. Meanwhile, the reality on the ground was rather different, with only 341 reservists being called up for training. They participated in firing exercises and tactical exercises in their companies.

The mobilisation of reservists is a common event during military training sessions where it is customary to switch out units from a peacetime to wartime standing and staff them with personnel to their full capacity. It happens regularly. In a typical year, the number of recruits for re-training hovers around two to four thousand people. Judging by the size of the military budget for 2015, one should not expect a specifically planned wave of militarisation in Belarus in the near future. The background to the whole situation – the war between Russia and Ukraine – generated more excitement around this event than warranted.

Meanwhile, nobody has noticed that during the exercises in January, military units and border guards drilled their interactions in strengthening the protection of the state border and preventing the infiltration of sabotage and reconnaissance groups from a neighbouring country.

It is especially noticeable against the background of the stagnation of other sectors of the nation's industry. The Board of the State Military and Industrial Committee (SMIC) met on 30 January to appraise the development of the agency in 2014 and set objectives for 2015.

They confirmed their intentions to decide on issues related to the nation's combat geographical-information systems, integrated counterattack systems for precision weapons, unmanned aircraft systems (UAS), launching systems, and combat systems for special operations and ground forces. The development of a range of communication equipment has nearly been completed. Before the end of the year, the development of digital shortwave radio stations are also slated to be finalised.

This year, there are plans to develop a legal framework for designing, testing and using UAS as well as for establishing a centre for certification for operating unmanned aircraft equipment (drones).

In 2015, the SMIC and law enforcement agencies will identify key areas where they can improve the efficiency of national security operations, including in the area of defence and develop proposals accordingly, which has been designated as a priority.

Separately, the SMIC's chairman underscored the intentions of Belarusian defence enterprises to participate directly in Russian state defence orders. Currently, their participation remains indirect. So far, the Russian side is still doling out empty promises of equal rights to the Belarusian military and industrial complex.

Siarhiej Huruliou, the head of SMIC, admitted that there was a slowdown in cooperation between the Belarusian defence industry and their Ukrainian colleagues "for some reason, [but] not related to the Belarusian [party]".

The Belarusian military and industrial complex is getting ready to design a combat UAV. However, to date, the ministry of defence failed to formulate a clear-cut position on this issue.