Stephen Sackur, BBC journalist who interviewed Mr Sannikau has made a few “hard” points, in particular to... 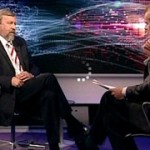 Stephen Sackur, BBC journalist who interviewed Mr Sannikau has made a few “hard” points, in particular to Mr Sannikau’s own personality. The journalist correctly pointed out that Mr Sannikau does not represent any major political organization in Belarus, just a well-run web site. Mr Sannikau also appears as an intellectual detached from the Belarusian population and is likely to have more friends in the West than in Belarus.

Stephen Sackur also pointed out that the Belarus’ economy is better than Ukrrain’s and the regime in Minsk has not committed any serious human rights violations since 1990-s when several prominent opposition figures disappeared. Lukashenka also seems to remain popular and Belarus economy is becoming more open because of the privatisation process.

Sanniknau correctly explained that it was wrong to judge the regime’s popularity by looking at opinion polls. No access to electronic media by anyone other that the ruling regime means no real popularity for anyone else. He also correctly pointed out that it was misleading to compare Belarus to Ukraine which because Belarus was in a much better shape after collapse of the Soviet Union. Privatisation in Belarus is done in a non-transparent way which is unlikely to benefit either the Belarus population or will make the economy more liberal. Finally, Sannikau pointed out that the prospect of Belarus’ integration into Russia is supported neither by the vast majority of Belarus population, nor by Belarus regime nor opposition.

Most of the issues raised in the BBC program are not new to those who follow Belarusian events. However, many in the huge audience of BBC will learn a few interesting facts about Belarus. It is important that Belarus problems are remain on agenda. It is less important who raises those problems as long as the basic values of Belarus independence, human rights and democracy are fully supported.

Economist: It Takes One to Know One 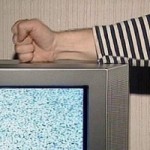 One good thing about what is going on is that for the first time the public in Belarus and Russia can hear basically the truth about the neighbour’s government. Belarusians can get truthful stories about problems with freedom of speech in today’s Russia (see a report by the Belarusian TV channel STV here). On the other side, Russian TV tells the truth about Aliaksandr Lukashenka in its scandalous documentary The Godfather.

Truth is such a rare thing for state media in authoritarian states like Russia and Belarus. Let’s hope we’ll see more of it as the conflict escalates.

RUSSIA and Belarus are unlikely champions of democracy and freedom of speech. But a postmodernist approach to politics can yield odd results in the post-Soviet world. In recent weeks these authoritarian regimes have denounced each other’s authoritarianism and deployed state-controlled media to attack each other’s lack of media freedom. Bizarrely, this war of words has been waged in the name of brotherly ties and economic union.

Hostilities broke out three weeks ago when Moscow and Minsk sparred over gas prices and Alyaksandr Lukashenka, Belarus’s president, nearly reneged on a customs union between his country, Russia and Kazakhstan, which was finally signed on July 5th. A day earlier NTV, a television channel controlled by Gazprom, Russia’s gas monopoly, aired “Godfather”, a documentary that portrayed Mr Lukashenka, long backed by Russia, as a brutal election-rigging, opposition-repressing tyrant.