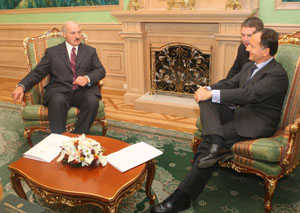 Anyway, it was truly a historical event that passed unnoticed: the previous time Belarus has been visited by a leader of a G8 country (except Russia) was Bill Clinton's visit in 1994. It's been fifteen years since then.

It passed largely unnoticed by the outside world, but perhaps the most intriguing event in European foreign policy last week was a visit paid to Belarus by Italian premier Silvio Berlusconi. The European Union has kept Belarus at arm’s length for years because of the repressive domestic policies of President Alexander Lukashenko. Berlusconi was the first western head of government to go to Minsk for well over a decade.

There was something surreal about the visit. Lukashenko, once dubbed Europe’s last dictator, praised Berlusconi as “a global, planetary man of politics, our friend”. Berlusconi responded: “Thank you, and thanks to your people who, I know, love you, as is demonstrated by the election results which everyone can see.” One can only assume this was an example of Berlusconi’s famous sense of humour.