Lizaveta Kasmach 25 April 2022
On 23 April, The Washington Post wrote about a clandestine Belarusian network of railway workers and dissidents who helped to stop Russia’s assault on Kyiv. Since the start of the war, certain Belarusians have disrupted the transit of Russian equipment through... 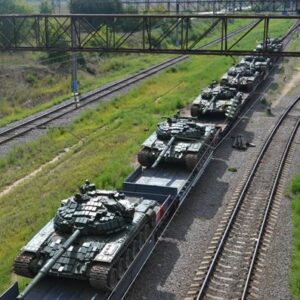 On 23 April, The Washington Post wrote about a clandestine Belarusian network of railway workers and dissidents who helped to stop Russia’s assault on Kyiv. Since the start of the war, certain Belarusians have disrupted the transit of Russian equipment through their country, documented Russian troop positions, and shared information with Ukrainians.

Authorities have responded with violence and charges of terrorism. Punishments range from long prison sentences to the death penalty. The authorities accuse the rail partisans of being in the pay of Western governments. They claim the so-called partisans seek to perpetrate disasters and mass human casualties. But only partisans have suffered physically so far.

What has happened since the start of the war?

Today’s rail partisans trace their history to Belarusian resistance in the Second World War. In 1943, partisans disrupted German reinforcements and supplies, destroying more than 90,000 rails, 1,061 trains, and 72 railroad bridges in Belarus alone. The “rail war” during WWII is a part of the school curriculum in contemporary Belarus.

Since the start of the Russian war against Ukraine, both state and independent Belarusian media have reported an increasing number of incidents on the Belarusian railways. Incidents at this scale have not been seen since WW2. However, a distinctive feature of the new “rail war” is modern partisans do not destroy trains or railway tracks.

The most common form of sabotage is the arson of relay cabinets. As a result, automatic signalling systems for trains and switches stop working, disrupting schedules, and forcing the trains to move at reduced speeds of 15–20 km per hour.

On 25 February, a cyber partisan group attacked Belarusian railway software systems in order to slow down the movement of Russian military equipment. Various systems, including electronic tickets sales, were down for more than two weeks, disrupting railway operations.

Authorities have been releasing information about arrests in order to intimidate participants of the anti-war movement. At the same time, independent media reports have been intermittent due to the serious risks that anti-war protesters could face if exposed. Therefore, it is not yet possible to evaluate the scale of the current “rail war.” Acts of sabotage are estimated to number more than 80.

Ukraine’s military command has acknowledged Belarusian resistance. On 23 March, Ukraine noted, “Sympathetic Belarusians, condemning the contribution of the current illegal Belarusian authorities to the war against Ukraine, have partially disrupted railway traffic between the Republic of Belarus and Ukraine.” On 24 April, Ukrainian presidential adviser Olexiy Arestovych also indicated he was aware of the contributions of Belarusian partisans in disrupting enemy railway operations.

The intimidation campaign against rail partisans 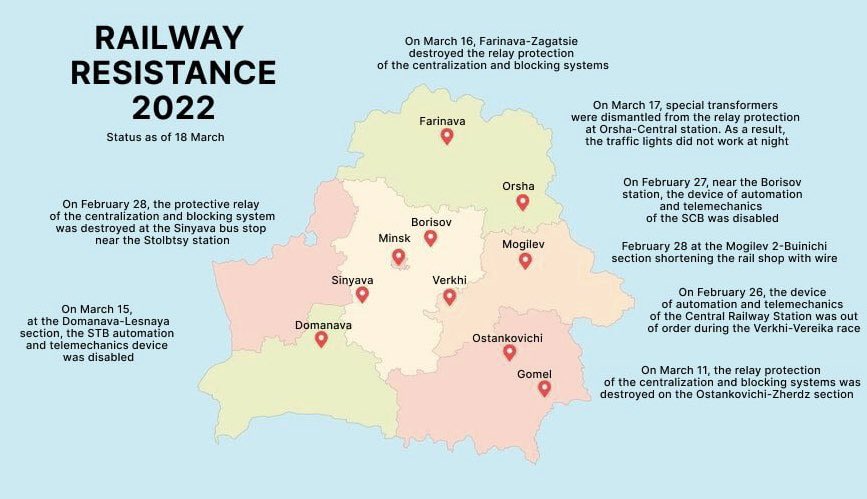 Kazakevich’s threats preceded a shooting incident in the Mahiliou region of Belarus on 30 March. Police detained three Babrujsk residents for the alleged destruction of a relay cabinet in the Asipovichy district. Officers claim they opened fire at the suspects for “actively resisting arrest.” By contrast, railway community Telegram channels assert the suspects did not resist. They allege officers deliberately shot the suspects the kneecaps after they were already detained.

Belarusian opponents of the war have also been disseminating information about Russian troop movements in Belarus. At first glance, this may seem a less risky form of resistance. But Belarusians can face extremism charges for the sharing of sensitive information. Guilty sentences can carry prison terms of up to six years.

For instance, on 5 April, the police arrested Iryna Abdukeryna, a former teacher from Hojniki, a town in the Homiel region. She was charged with taking pictures of a Russian military convoy and sharing them with the Belaruski Hajun Telegram channel. She is now one of 1,143 political prisoners in Belarus as of 24 April. Throughout March and April, human rights defenders have reported an increase in the number of arrests on similar charges.

The Belaruski Hajun project aims to uncover the movements of the Russian troops in Belarus. Belarusian opposition activist and blogger Anton Matolka is the originator of the project. The project’s Telegram channel has almost 400,000 subscribers and features user-generated content about Russian troop movements in Belarus. Warnings of Russian missile launches and aircraft missions from the Belarusian territory also appear on the channel.

Matolka told Radio Liberty that his team has been receiving nearly 1,000 messages daily. In response, Belarusian authorities recognised all projects linked with Anton Matolka as extremist groups. The activist thinks that his various initiatives have contributed to the redeployment of Russian troops away from Belarus. He believes Russian soldiers did not feel secure and they did not expect the population would display such levels of hostility towards them.

Belarusians who oppose the regime’s logistical support of Russia’s war have faced brutal repression. Activists, who have been driven underground, must now use more covert forms of protest. The campaign of intimidation suggests the authorities are troubled by such developments, which are perceived as a direct threat to the regime’s continued hold on power.

Can the Belarusian army make a difference in the Russia-Ukraine war? 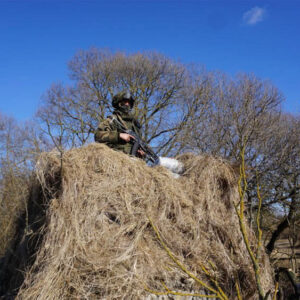 Last week, regional and international media, including major networks like CNN, again reported about the “increasing probability” of Belarus joining Russia’s invasion of Ukraine. Earlier, an advisor to the Ukrainian Minister of Internal Affairs said there was now a 60 per cent of probability Belarus would invade.

Meanwhile, whatever intentions Russian President Vladimir Putin or Belarusian President Alexander Lukashenka might have, there is little more Belarus can offer in military terms to Russia’s war efforts. Rather, such a deployment would serve to further the Kremlin’s political aim of deepening Belarus’ international isolation.

The road to Kyiv

The latest reports of a forthcoming Belarusian attack seem to stem from recent diplomatic ruptures between Minsk and Kyiv. On 19 March, due to impediments encountered by the Belarusian embassy in Kyiv, Minsk recalled its diplomatic staff from Ukraine.

So far, the Russian army has been using Belarusian territory as a base from which to launch missiles and cross into Ukraine. Belarusian hospitals are also treating scores of wounded Russian soldiers, which in itself does not amount to participation in the war, because international conventions allow it.

Geographical proximity makes it logical to destroy or conquer Kyiv from Belarusian territory. Indeed, this was the aim of Russia’s military operations in the first weeks of the war. Even complex, multiple-launch rocket systems can reach the Ukrainian capital from Belarus. And land forces are well-placed to quickly advance on Kyiv. There are fewer fortifications and fewer Ukrainian troops in north Ukraine compared to the east or the south. This is despite the fact Ukrainian authorities have worked to militarise its northern borderlands in recent years. 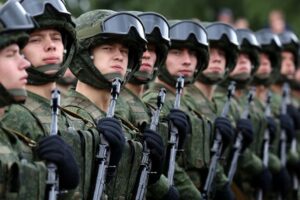 Preparations for Putin’s invasion of Ukraine are likely to have begun only in recent months. As a result, the infrastructure necessary to conduct a large-scale operation was missing. Dedicated roads, bridges, and pontoon bridges (for example near Pinsk) all had to be hastily built after the war began. While Russian troops operate unhindered in Belarus’ southern regions, there is a lack of purpose-built facilities.

The Russian army has been forced to transport its wounded soldiers to Belarusian civilian hospitals in Naroulya, Mazyr, and Homel. Minsk has not prioritised military infrastructure along its border with Ukraine. It even abandoned Soviet-era bases there (for example, airbases in Pruzhany and Kobryn) and, in the 2000s and 2010s, relocated units to other regions of Belarus. Russia, by contrast, has been preparing its own borderlands with Ukraine for years. Moscow has stationed troops, built new barracks, roads, hospitals, and whatever else is needed to establish a rear base for the war.

Belarus’ lack of preparedness is unlikely to help Russian war efforts to seize Kyiv. Indeed, it could undermine them. No wonder on 25 March, the Russian leadership announced henceforth it was going to focus on the Donbas region in Eastern Ukraine. Russia can rely on the brand-new military infrastructure and facilities it has constructed there over the past eight years.

No soldiers for Putin?

Since mid-March, Moscow has been looking for new forces to send to the front. In its search, it has even turned to recruit Syrians. Belarus has cautiously remained on the sidelines. On March 11 as Lukashenka met with President Putin in Moscow, Russian aircraft (as the Ukrainian government claims) fired on Belarusian villages from Ukrainian air space. Even this alleged “false flag operation” did not provoke Minsk to join the war.

Kyiv, certainly, has been keenly watching for signs of an attack from the North. Ukrainian generals talk of Belarusian troops entering the fray with two decisive objectives—to encircle the Ukrainian capital, and to interrupt Ukrainian army supplies coming from the West. On 22 March, former Deputy Chief of Ukraine’s General Staff Ihor Romanenko told Al Jazeera that Belarus might send 10 to 15 battalions (up to 800 men in each) to support Russian troops in Ukraine. According to Romanenko, they might help their ally to seize Kyiv. On the same day in televised remarks, Ukrainian Security Service Major General Viktor Yagun predicted Belarus might deploy its troops in Ukraine in three waves of 5,000 men each. Major General Yagun named the western Volyn region as a possible invasion route, which would cut a main Ukrainian supply route for Western military aid.

But Minsk has hardly any troops to send to Ukraine. To meet the numbers cited (above) by Ukrainian officials, it would require the withdrawal of all battle-ready units from other strategic locations inside Belarus. This would leave Belarusian regions undefended. Such a development is hard to imagine considering current tensions with neighbouring NATO countries.

At the same time, Putin’s pressuring of Belarus is not about numbers. If Minsk can be forced to send even a symbolic detachment of soldiers to Ukraine, this will suffice for some of the Kremlin’s aims for Belarus: namely to entangle Minsk deeper into the Kremlin’s embrace and to reduce its options to escape Putin’s clutches.

Belarus lacks not only the manpower for an invasion. The Belarusian military needs new arms and equipment to be of any material use to Putin. Since its independence and until August 2020, Belarus has only acquired some relatively modern air defence equipment and some aircraft from Russia. Its army met some of its modernisation needs by purchasing Belarusian and Chinese equipment, which was enough only for Belarus’ own needs—not for participation in a large-scale invasion. Moreover, the Belarusian army’s equipment differs from its Russian ally. This creates problems for interoperability.

After protests erupted across the country in 2020, Belarus has become increasingly isolated. Minsk has rushed to buy Russian arms, including Mi-35 attack helicopters and BTR-82A armoured personnel carriers, which are ideal for offensive operations. So far, it has bought enough BTR-82As for just two battalions. Time is still required time to train battalion personnel to use them. Therefore, on 12 March, President Putin and his Belarusian counterpart Alexander Lukashenka agreed on supplies of new, sophisticated Russian arms for Belarus.

To sum up, for years Minsk has refused to make preparations for a war with Ukraine. This has become a safeguard against Kremlin pressure. The Belarusian army has neither the men nor the equipment to participate in the invasion of Ukraine. The borderlands with Ukraine have very few military facilities to support a full-fledged offensive.

Kyiv has noticed Minsk’s reluctance. Ukrainian President Volodymyr Zelenskyy has hinted at Minsk’s resistance to Putin’s pressure saying, “I really want these words to be heard by our common neighbours, the Belarusians. Peace between relatives, peace between neighbours, and peace between brothers—we must achieve this with them too. And we definitely will.”

If treated strategically, Minsk withholding active troop involvement in north Ukraine might help Ukrainian forces resist the thrust of Putin’s invasion from other directions. In turn, this might prevent further escalation and create better chances to end the war and overcome its consequences.