In 1905 his grandmother Ida left the village of Novy Svierzhan, about 60 km (46 miles) to the southwest of Minsk. At the age of 13 she set out to travel with her family to the United States of... 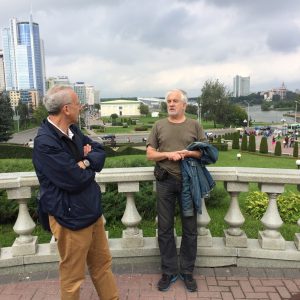 In 1905 his grandmother Ida left the village of Novy Svierzhan, about 60 km (46 miles) to the southwest of Minsk. At the age of 13 she set out to travel with her family to the United States of America. She never returned.

In her perfect English with no trace of an accent she rarely reminisced about her past. One hundred and ten years later at the age of 65 he travelled back to her birthplace to discover his roots and another country.

He found the places, but they carry no memories. He found a country which preserves few traces of his ancestors. And yet Professor Krohn thought it was a trip worth making. But without a local, this would have been nearly impossible.

Belarus remains a country with little infrastructure for English-speaking visitors. The newly appointed Head of the National Tourism Agency, Veranika Darozhka, recognises the potential of ‘nostalgic’ tourism and seemingly has the proper experience to make it work.

Professor Krohn had to start planning the trip in advance. A journey to Belarus cannot be made on a whim. US citizens need to obtain a visa from the Belarusian Embassy in Washington or Consulate in New York. The process requires extensive preparation and financial investment. Preparations in his case included obtaining an invitation from a former student residing in Belarus, confirming that he could stay with them. The cost of a visa was $130.

His teaching obligations brought him to neighbouring Latvia from which he managed to take inexpensive trains to Lithuania and then to Minsk. He got lucky, as no low cost carriers will bring you to Belarus. He found ground transportation services swift and reliable. The only downside was that trains had no designated space for suitcases in them. Upon arriving in Belarus, he realised that English would not suffice. He taught himself to read Russian, but understanding the spoken language was harder.

Even according to current figures, it accounts for one third. That number of people must have left some heritage behind. However, there remained only two traces, neither of which well preserved. The locals easily directed Professor Krohn and his two guides to the remnants of a synagogue and the Jewish cemetery. Interestingly, everybody, even the youth, knew exactly where to look for them. Both looked dilapidated and abandoned.

The next stop was Mir and Niasvizh. Both cities boast well-preserved major tourist attractions listed by UNESCO as World Heritage sites, including the sixteenth century Mir Castle and a palace. Few people know, however, that the 1921 census of Mir showed that 55 per cent of the population was Jewish. Mir or Mirrer Yeshiva was established in 1815 by prominent local Jews and gained a reputation far beyond the little town, attracting students from many parts of the world. 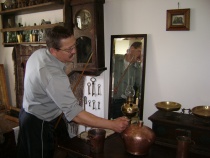 Except for a small private museum run by a local enthusiast by the name of Viktar Sakiel, no other places in Mir contain information about the once vibrant community. One of the four rooms in his private museum features Jewish culture and exhibits collected in the cellars and attics of his neighbours. He works as a collector, fund-raiser and a tour guide for his little enterprise. Some of the exhibits are for sale, many can be touched, and all can be photographed.

Reworking the Past, Looking at the Future

A few Hollywood celebrities trace their ancestry to Belarus, including actors Kirk Douglas and Lisa Kudrow. Many other less famous descendants of Jews from the former Russian Empire have re-discovered their heritage. However, 110 years seems too long ago for Belarusian history. Except for a few private or foreign sponsored initiatives, there seems to be little effort by the state to either preserve or feature the Jewish past of the country.

Yet maybe the government has recognised the historic, cultural and financial potential of Jewish heritage in Belarus. In early March the National Tourism Agency selected Veranika Darozhka from among eight candidates to become its director. Darozhka’s profile features work for the Jewish NGO network and a fellowship at the University of Jerusalem.

In her interview with the traveling.by portal she states the following: “I take deep interest in promoting Belarus in the international arena. I understand the challenges of the current situation and have a vision of how to deal with them and move forward”. Most importantly she notes among her priorities: “This is so called ‘nostalgia’ tourism because so many people had left Belarus in the past and have now become interested in it. Our country has a diverse, rich heritage to offer to various nations".

This rings true for many Jews in the United States, including Professor Krohn, who trace their ancestry to former shtetl or miastechka in Belarus. And while he certainly admired the nature, hospitality and culture of modern Belarus, he just wished he could see more of his own once vibrant culture preserved and featured. Professor Krohn says:

Except for the incredibly moving memorial to the Jews descending to the killing pit, there is a notable paucity of Jewish sites in Belarus. But then I expected little in this regard and I cannot say I was disappointed. The other point I can make with total honesty is that my first trip to a country in the current Russian orbit was fascinating and enjoyable in its own right. The food was good, the transport well organised, the parks absolutely glorious and the broad thoroughfares remarkably clean and well tended for such a large city.

Belarus continues to be expensive to get to and hard to get around without knowledge of Russian or Belarusian. The new leadership at the National Tourism Agency should generate much-needed initiatives reflecting historic cultural diversity and do away with the unnecessary entry restrictions.

The European Union once viewed him as "Lukashenka's purse" and he was on the EU sanctions list until recently, seeming to be "untouchable".

Chyzh's detention followed rough times for his business. Several theories may explain his detention: the authorities are simply trying to raise cash, Chyzh became a victim of a struggle inside the regime, or Belarus is trying to challenge the interests of Russian businessmen.

Yury Chyzh​ is just one of many talented businessmen to emerge in Belarus in the 1990s. But he differs from many other entrepreneurs because he managed to expand his business empire and built close personal relations with Lukashenka, who does not have a pro-business reputation.

Just two years ago, Chyzh, general director of the Triple Holding, topped the ranking of the most influential businesspeople in Belarus. His business empire focused on oil refining, but had interests in many spheres – from producing soft drinks to construction. He was a regular at the president's home and accompanied him on public occasions – from foreign visits to hockey matches and harvesting potatoes. 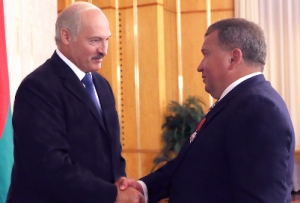 Chyzh never played an important political role, although he executed some deals at the request of the government. Among them, the so-called solvents business – in the early 2010s Chyzh was involved in the controversial trade of refined Russian oil products. The Belarusian state has profited from the deals. So has Chyzh.

On 15 March, KGB chairman Valery Vakulchyk told journalists that his agency arrested Chyzh for tax fraud. According to the KBG chairman, Chyzh tried to flee the country by speeding 220km per hour towards the Western border, trying to escape from the Belarusian special services who eventually managed to catch him.

When asked about whether Lukashenka knew about the arrest, Vakulchyk said that he had made the decision on his own. Vakulchyk also added that "just because someone has had his photo taken with Lukashenka or played hockey with him, it does not mean he receives any special treatment."

The first signs of Chyzh's problems emerged after a company owned by Triple failed to complete construction of a hotel in the centre of Minsk on time. Officials started to hint that a new investor was coming to replace Chyzh. At the same time, the government had to prolong the terms of a state-commissioned contract on construction of army housing for Triple.

Still, the detention last August of Chyzh's closest business partner, Vladimir Yaprintsev, and his son Kazbek, was unexpected. Nineteenth in the ranking of the most influential businessman compiled by Ezhednevnik daily, Yaprintsev was arrested on suspicion of illegally channelling his money abroad. Now the Belarusian authorities are charging Yury Chyzh with doing the same.

Yaprintsev and Chyzh are now giving evidence against each other​. Their relations turned sour when their business empire started to crumble. In recent years Triple has started selling its assets, downsizing personnel and cutting expenses. This year, Chyzh failed to even make it into the Top 10 list of the most influential businesspeople, landing in 12th place.

Why the Belarusian authorities detained Chyzh

It seems that nobody believes that the Belarusian KGB can act without direct authorisation of Lukashenka in such high level cases. There are three possible explanations for what was behind the decision to go after the Chyzh business empire.

Version No 1: The Belarusian authorities are trying to raise money inside the country. Belarus desperately needs money and foreign creditors remain reluctant to work with Belarus. So the authorities need other ways to fill the gaps in the Belarusian budget. Chasing business people who have fallen out of favour with Lukashenka is one way. With Chyzh's empire tumbling because of disagreements with his business partners and falling oil prices, the authorities decided to take what they can.

As money stores in Belarus shrink, the competition for resources keeps increasing. Chyzh is not the only example. Several days after Chyzh's detention, the authorities arrested Yauhen Baskin, the largest producer of broiler meat in Belarus. Chyzh's arrest may be part of a larger campaign against Belarusian businessmen to raise funds.

Version No 2: Chyzh became a victim of an internal regime struggle. Chyzh, as one of only a few pro-market voices in the establishment and one of the richest Belarusians, has enough enemies. Now and then he has criticised government officials – in an interview given two years ago, but published by Narodnaja Volia newspaper only after his arrest, Chyzh proposed firing half of all bureaucrats.

Although he is far from being Belarus' Khodorkovsky, his strong position seems to have challenged the old guard, formed of officials, directors of state-run enterprises and law-enforcement agencies. And when Chyzh's business started to weaken, the KGB used the opportunity to lock him up in a Belarusian prison.

Version No 3: Belarus is cracking down on Russian businesses in the country. By disrupting Triple, the Belarusian authorities are also challenging the company's Russian shareholders who have leverage at the highest levels of the Russian establishment. Two minority stakes (16.75 per cent each) in Triple belong to Russian businessmen Iosif Aksentyev and Mikhail Mamiashvili. Both seem to mix business, political and criminal activities. It is possible that the Belarusian authorities want to disrupt the whole business empire linked to Aksentyev and Mamiashvili.

The Belarusian leadership has once again proved that it itself decides what to do about Russian business interests in Belarus. On a previous occasion, Minsk did not hesitate to arrest Vladislav Baumgertner, a top-manager of major Russian company Uralkali.

Whatever the reason for the arrest, it remains unlikely that Chyzh will spend much time behind bars. The Belarusian authorities have a tradition of freeing convicted officials and businessmen ahead of schedule if they show loyalty and pay compensation for their crimes.

But even if Chyzh leaves prison soon and saves at least part of his business, his case represents the epic fall of the most influential Belarusian businessman.