Belarus in the Arab World: a one family business?

The day before the forum, the Omani delegation met with Aliaksandr Lukashenka, who urged... 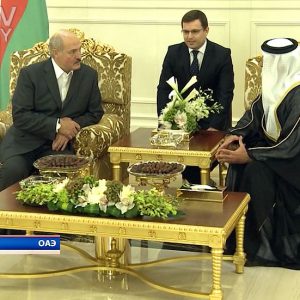 Lukashenka during a visit to the UAE in 2014

The day before the forum, the Omani delegation met with Aliaksandr Lukashenka, who urged the Omani businessmen to invest more in Belarus.

While the Middle Eastern vector of Belarusian foreign policy plays an important role in public declarations, actual trade and business has yet to follow.

Grand plans rather than roadmapping

In August 2016 the Belarusian government adopted a new strategy for export development in 2016-2020. According to this plan, one third of Belarusian exports would go to the Eurasian Union, one third to the EU, and one third to so-called “far arc” countries.

As is often the case with Belarusian state programmes, such ambitious plans are rarely supported by practical follow-through. Statistics illustrate opposing trends in the development of Belarusian exports: Belarus is failing to retain its share of all markets outside Russia. Low quality, high prices on manufactured goods, excessive bureaucracy, and degradation of technology all prevent Belarus from finding new prospective markets abroad.

No place for Belarusian goods in Arab countries?

Despite pretentious declarations about the importance of Arab countries for the Belarusian economy, the actual figures do not support these claims. In January-July 2016 the total turnover between Belarus and the region amounted to around $120m, i.e. less than five per cent of the total turnover. 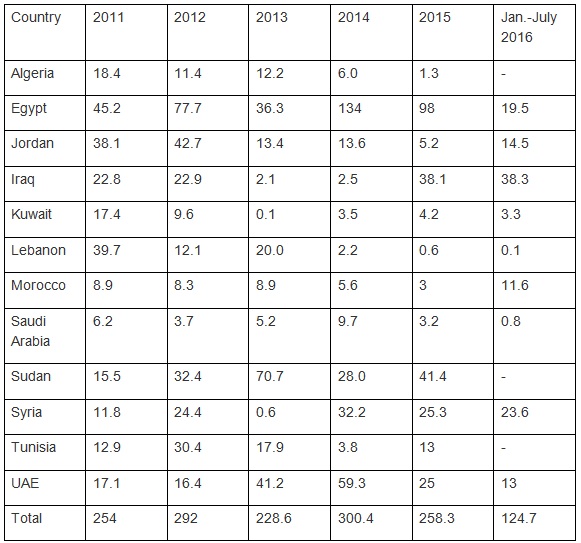 On the other hand, this also shows the unstable character of Belarusian trade with Arab countries: export and import can fluctuate by 1000-1500 per cent. This is caused by signing one-time contracts without a permanent presence on these markets.

Contrary to widespread belief, Belarus has failed to attain a positive trade balance with all Arab countries. In January-July 2016 Belarus had a negative trade balance with Lebanon, Morocco, Saudi Arabia and Somalia with a roughly $66.5m trade deficit. Moreover, in 2011-2016 Belarus actually lost the Algerian and Lebanese markets. The table below illustrates these trends: 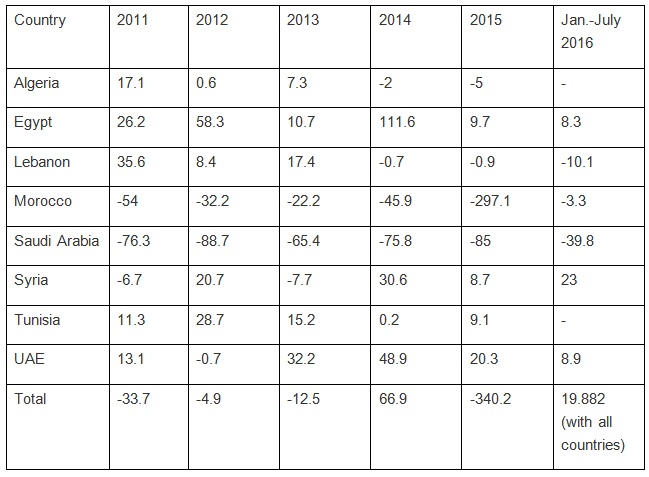 The variety of Belarusian goods exported to Arab countries also remains very limited. Official documents mention powdered milk, tyres, different kinds of steel, tractors and machinery. Egypt and Jordan are among the most important consumers of these goods, but even here the volumes and amounts of these exports is comparatively low.

Numerous reports indicate that Belarus has become a successful supplier of weapons to several Arab countries, including Iraq, Syria and Sudan, while nevertheless managing to avoid any serious involvement in regional conflicts.

Many experts emphasise the importance of personal ties in this process. Belarus has become sadly notorious for its close relations with Iraq during the presidency of Hussein, with Gaddafi’s Libya, with the Sudanese leader al-Bashir, and the Syrian president Bashar al-Assad.

Such relations can be seen as a form of mutual support between authoritarian and anti-Western leaders. However, Lukashenka and his family also maintain good personal relations with the Gulf monarchies, particularly with the ruling families in Qatar and the UAE. Belarusian researcher Siarhei Bohdan considers that Belarus's relations with the Gulf States are the main vector in Belarusian foreign policy in the Middle East.

The economic benefits for Belarus of such friendship are dubious, and moreover are a source of much gossip about the nontransparent nature of cooperation, especially in the finance and security sectors.

Some experts believe that Lukashenka's family's hidden billions are stored in Gulf banks. The personal devotion of the president’s eldest son – Viktar Lukashenka – to the Formula 1 races in Abu Dhabi is no secret in the region.

Belarus actively participates in training Qatar’s and the UAE’s security forces, as well as in presenting its weapons at military exhibitions in the Gulf. Russian political commentator Evgeny Satanovski has accused Belarus of working against Russia's interests in the Middle East. According to him, Qatar and the UAE purchase arms for ISIS largely from Belarus.

The Gulf States are among the largest investors in Belarus from the Middle East. However, they invest mainly in lands and resorts, while the financial details of these operations remain unknown.

The Omani case serves as an example of the unstable and personally motivated character of Belarusian foreign policy in the region. Actual relations broke off in 2007 after Lukashenka’s visit to Muscat. Trade turnover amounted to $7m, with several Omani businessmen working in Russia becoming a driving force for this cooperation. In the following years the trade turnover fell to $1m and all contacts practically ceased.

In 2010-2012 Omani businessmen tried to purchase a large plot of land in the centre of Minsk for the ridiculously low price of $10m but could not reach a final agreement. Even the price itself led to suspicions about the non-business nature of such investments.

Belarus has failed to establish efficient and sustainable economic relations with the Arab countries. Instead of transparent and profitable business, the Belarusian authorities prefer personally grounded backroom dealings with their counterparts in the Arab world.

Nontransparent business schemes and security cooperation with pro-Western Gulf States seem to be the current preference of the Belarusian foreign policy in the Middle East. Its public economic component becomes less significant.

Aliaksandr Filipau
Aliaksandr Filipau is the Dean of the Faculty of Extended Education at the Belarusian State University of Culture and Arts, and expert of the NGO 'The Liberal Club'.
all articles »
Belarus foreign policy Belarus-Oman invest forum Belarusian export Middle East Oman

Belarus is preparing for a Donbass-like hybrid war conflict 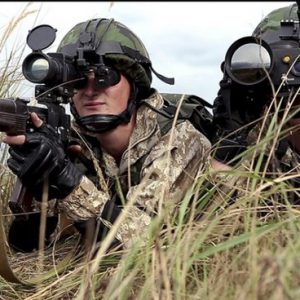 Despite the fact that these military exercises were planned, they demonstrate a significant shift in security policy as Minsk increasingly takes into consideration possible risks and challenges from Russia.

It seems that the Belarusian Armed Forces are preparing for a possible Donbass-like hybrid conflict in light of increasing pressure from the Kremlin.

Full-spectrum pressure from the Kremlin

As a matter of fact, Belarus is in a position of uncertainty in regards to what to expect from Russia. Permanent trade wars between Belarus and Russia have become the new normal since the Ukraine-Russia conflict. Moreover, there is also a possibility of gas and oil wars because there is still no consensus on a new agreement. This is why Minsk has voiced profound dissatisfaction with the efforts of the Eurasian Economic Union and the Union State.

These sore spots in Belarus-Russia relations have given reason for the Belarusian leader Alexander Lukashenka to heavily criticise various integration programmes with Russia. He has also expressed his concerns about certain unfriendly actions as “pressure that he would not tolerate”.

New drills reflect the military-political situation in the European region

Underlying the general framework of these recent national military drills are special operations to stabilise the situation in potential crisis areas. Some 7,500 troops, 60 battle tanks, 220 armoured combat vehicles, and 50 artillery pieces, mortars and multiple launch rocket systems were part of these exercises. Territorial defence and Border guard forces, as well as the Ministry of Interior and Emergencies Ministry also joined them.

Thus, the Belarusian Armed Forces brought a very large number of military equipment to the firing range. As a matter of fact, roughly the same amount of military hardware was used in the “West” (“Zapad”) joint strategic exercises with Russia in 2013 (350 armoured vehicles, including 70 tanks, over 50 artillery pieces and multiple rocket launcher systems).

According to statements by Alieh Bielakonieŭ, the Head of the Belarusian Armed Forces General Staff, military officials took the new military-political situation in the European region into consideration, as well as the experience of new military conflicts, which have significantly changed the nature of war. Recently Belarus has adopted a new Military doctrine which pays a lot of attention to countering hybrid warfare.

Therefore, the Belarusian Armed Forces are now conducting exercises in preventing hybrid conflicts in order to put the basic provisions of the new Military doctrine into practise. Since the Ukraine-Russia conflict they have been conducting drills which include elements of a Donbass-like hybrid scenario. Recent military exercises were completely dedicated to hybrid warfare.

According to this scenario Belarusian military strategists simulated a situation in which a hypothetical foreign adversary provoked an internal armed conflict in the country with the help of reconnaissance and sabotage groups and illegal armed formations. Incidentally, the new Military doctrine of Belarus doesn’t mention “hybrid conflict”, favouring the term “internal armed conflict."

The Belarusian Armed Forces have been practising neutralising illegal armed groups, securing and releasing captured critical infrastructure objects, and neutralising separatist groups backed from abroad. Assigned tasks also included establishing temporary checkpoints on the state border and main road routes and conducting surveillance along the border. Without doubt such measures remain necessary only on the Belarus-Russia border due to the absence of any border control, in contrast with the NATO countries and Ukraine.

This was the first time that military drills were held over the entire territory of Belarus: officials achieved a uniform distribution of forces in the Western and Eastern parts of the country. What's more, the General Staff emphasised that the main idea behind the exercises was to ensure Belarus is capable of maintaining independence, sovereignty and territorial integrity with its own forces.

It also differs from previous military exercises before the Ukrainian crises (for example “West”/ “Zapad” in 2009 and 2013 or “Shield of the Union” in 2011 and 2015) when Belarus and Russia formed the Regional army group in order to defend Belarus from possible attacks from the West.

Blockage and mopping–up, liberating an airfield, securing a border

Many elements of the recent military drills bear a strong resemblance to the actions of the so called DNR and LNR separatist groups in Eastern Ukraine. At the beginning of the Russia-Ukraine hybrid conflict, separatists under the command of Igor Strelkov (Girkin) successfully seized towns and cities such as Slavyansk. They captured important infrastructure objects including the railway stations Debaltsevo and Avdiyivka and Donetsk airport. They crossed the Russia-Ukraine border and received a military support from Russia without any problems. It seems that Belarusian military strategists are taking this experience into consideration. 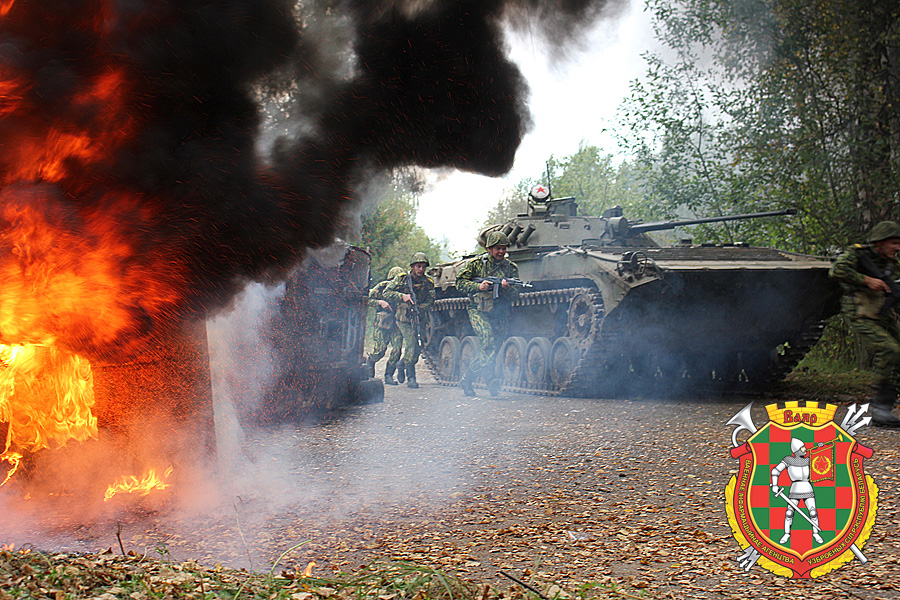 For example, one element of the recent military exercises included the creation of a humanitarian corridor for civilian residents from a town captured by illegal armed groups.

According to this scenario, illegal armed groups capture a town in order to persuade the civilian population to side with them. Representatives of the Armed Forces and the Ministry of Internal Affairs had to negotiate the withdrawal of the civilian population from the dangerous perimeter. And in case the separatists did not agree with the terms of surrender – the 19th mechanised brigade had to block and mop up the town.

Message to the Kremlin

All these formations of the Belarusian Armed Forces were assisted by heavy artillery and Air Forces, which indicates that they were preparing for confrontation with illegal armed formations and separatist groups backed by the armed forces of a hypothetical foreign state.

The same situation can be seen in Donbass where the illegal armed formations DNR and LNR are operating with the military support of at least 15 tactical battalion battle groups from the Russian Armed Forces.

By conducting such military drills Minsk is expressing its concerns over the economic, political and military pressure on Belarus from Russia and demonstrating its readiness for any scenario, including a coercive one.

Arseni is the Director of the Centre for Strategic and Foreign Policy Studies based in Minsk and military officer in reserve of the Belarusian Armed Forces.

Arseni Sivitski
Arseni Sivitski is the Director of the Centre for Strategic and Foreign Policy Studies based in Minsk; he is also a military officer in reserve for the Belarusian Armed Forces.
all articles » Follow @
armed groups Belarus-Russia Belarusian army Belarusian border Donbass Military doctrine military drills Ukraine crisis