The pretext for sentimental patriots to moan is another reason... 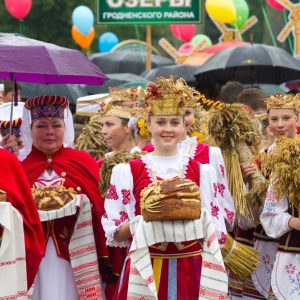 The pretext for sentimental patriots to moan is another reason for state authorities to rack their brains. They have eased tax burden, extended territories with privileged regimes, and achieved impressive results in the World Bank's Doing Business ranking.

But investors ignore the country with qualified, quite cheap and hard-working employees with opens access to the Russia-Belarus-Kazakhstan Customs Union with its market of 170 mln people.  Big foreign businesses may secure unique privileges and cordial greeting, but then expose themselves to significant risks.

Small enterprises risk less, but are to go through all thickets of Belarusian bureaucracy, which is often unbearable even for local dwellers. Bad image in the Western media and political unpredictability also add to investors' unwillingness to invest.

Still, these factors can hardly explain the 75 per cent fall of net foreign investments.

Belarus’ underperformance at attraction of foreign investments is no news.  Even compared to other states of the Commonwealth of Independent States its achievements are poor. 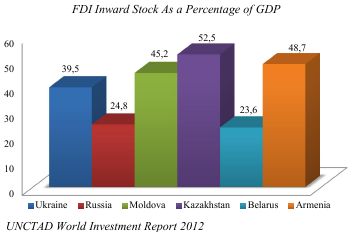 With this gloomy background, the 75 per cent fall of net foreign direct investments within a single year surprises even more.

More specific figures help to ease the astonishment.  The $3,974 mln of net foreign direct investments in 2011 were unprecedented for Belarus and mainly appeared from one big deal.

Russian giant Gazprom purchased Beltransgaz’s stock for $2,500 mln. Without this transaction, the index’ decrease would be more modest.

In 2012 Belarus failed to privatise any big state company.  Or, perhaps, it did not really need it. As Belarusian economist, Leanid Zaika, explained to Deutche Welle, “the use of grey schemes in “solvents business” has brought to Minsk about $ 2,500 m, which has fully replaced foreign investments”. 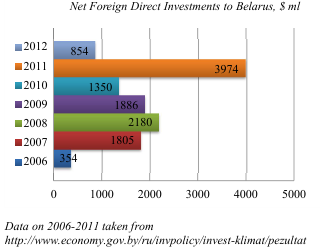 Thanks to the solvents scheme, Belarus could continue behaving like a picky girl, or sooner Lukashenka – acting like her austere father. To please him foreign investors should bring significant resources, latest technologies, and welcome state’s representatives at their company’s Advisory Board. But such investors are rare, if not unreal.

However pleasant the process of being choosy can be, Lukashenka will probably have to give up this privilege. In 2013, Belarus is supposed to say goodbye to another $3 bn for covering its external debt.

The solvents business has stopped. Chances for cheap foreign credits for the debt’s covering have lowered. The need for investments is growing.

Spartak, Kommunarka, Luch. What Is Next?

The government failed to attract enough investments to Belarus in 2012, it has also damaged the country’s investment climate. Last November the conflict between Lukashenka and a foreign investor – Marat Novikov – resulted in more than two times’ increase of the state’s shares in Kommunarka and in Spartak, dissolution of both companies’ Advisory Boards and assigning state officials as their sole directors.

But Belarus did not stop there. On 28 December 2012 an extraordinary general shareholders meeting of OJSC “Luch” voted for transfer of 5.4 per cent of the company’s stock to the state. Before that, the state’s share constituted only 0.18 per cent of stock.

It was the state’s representative in the Advisory Board of Luch, who initiated such voting. Initially, the representative spoke about increase of the share up to 25 per cent. But further steps of the state with regard to the company’s stock are still unclear.

Reaction to these facts was quick. The terms nationalisation and “reprivatisation” seem to be the most popular among investment analysts and potential investors, when they speak about Belarus now. In such environment Lukashenka’s words during entrance speech at the 7th Belarus Investment Forum that “we guarantee the best conditions for doing business to investors” sound like an empty promise.

Still the Belarusian government is trying to attract foreign investments.  Belarusian lawyers are working on perfection of laws on investments, concessions and public-private partnership. The complicated tax system is becoming simpler. Investment forums are growing both in scale and in number. Belarus’ rating in Doing Business is rising.

Belarus has also been providing the most wanted foreign investors with privileges and benefits on a case-by-case basis. Among the newest appeals is the creation of Chinese-Belarusian Industrial Park – today the most favourable place to do business in Belarus.

Investments' attraction through diplomatic cooperation is another tool. Recently, Lukashenka has assigned the special task of each Belarus’ foreign ambassador to attract investments. Traditionally, the assignment looked more like an order and the ambassadors are now responsible for the tasks received.

Lukashenka himself also is active in cooperation with selected foreign ambassadors. Last December he had a very friendly meeting with the Iranian ambassador Seyyed Abdollah Hosseini. Lukashenka’s warm attitude to the ambassador is quite explicable. During four years of his stay in Belarus Iranian investments in Belarusian economy rose from $6m to $960m.

However tough are the efforts, friendly political relations and privileged tax treatment are not enough to satisfy Belarus’ financial hunger. Not so many countries in which state authorities dispose of investments instead of private parties still exist. And capital from Russia, Venezuela, Azerbaijan and Iran make only a small part of the world’s investments.

Businessmen from most other countries want the host state of their investments to have stable economy, predictable legislation and trustworthy government. Belarus makes different efforts for investments’ attraction, but among the most important factors, it still does not have much to offer. 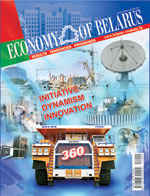 The Belarusian government has announced its plans to modernise the national economy. However, the content of the policy package is far from clear. Given the experience accumulated by Belarus and other transition economies, there are reasons to warn about possible traps that modernization policy could set, if implemented unwisely.

The government has announced a new course for modernization to strengthen weakening economic growth. In October 2012, Prime Minister Myasnikovich emphasised that “modernization of the national economy is a priority”.

When reporting to Aleksandr Lukashenka on 14 January 2013, Myasnikovich has been warned that the pace of modernization shall not be slackened. The target of modernization is apparently the state sector of the economy, which still produces about two-thirds of Belarus’ GDP.

Lukashenka summarised  his vision of modernization policy at a press-conference on 15 January 2013. According to him, modernization is about “the installation of new equipment to the available production facilities”. Modern equipment is supposed to boost productivity and output growth as the stock of capital is increased – a necessary step to sustain a growth trajectory, which has been declining since from 2011.

In 2012, real GDP growth amounted to 1.5 per cent, while real investment dropped by 13.8 per cent (see Figure 1 below). Without investment growth, GDP dynamics is in danger of further enfeeblement.

Both workers and managers of state-owned enterprises understand that the stakes in the “modernization game” are high. In particular, workers of the wood-processing plants are not allowed to leave their enterprises unless modernization is over.

Independent trade unions – supported in their claims by their Russian and international colleagues – criticised the emergence of “new serfdom” at the Belarusian labour market. Furthermore, a CEO and three managers of Mogilevdrev, a company with modernization underway, are being persecuted for the misuse of public funds granted for it.

In fact, intentions to revive poorly performing economies by the means of technological renovation of industries are not novel for the post-socialist world. In the late 1980s, Poland, Hungary, and Bulgaria and other countries tried to revamp their economies by using foreign money to purchase equipment from abroad. However, export revenues were not sufficient to pay back foreign loans.

First, extensive trading within the socialist block by using convertible roubles had resulted in the lack of hard currency. Second, a more fundamental challenge came from the weak capacity of socialist enterprises to innovate. Foreign equipment was insufficient to substitute a whole system of incentives for managers and workers.

Export-oriented growth of East Asia type failed to materialise. As a result, socialist economies were forced to start their transition to capitalism with considerable levels of foreign indebtedness. This fact allowed international financial institutions as the IMF to exert leverage upon reform, as, for instance, it happened in Poland.

This experience is worth to have in mind when thinking about the design and likely effects of modernization policies in Belarus. In a nutshell, Belarusian authorities see modernization as a task for the state, realised by the means of state investments to state-owned enterprises. Seeing in this light, these policies are not novel, but a continuation of lasting state investment policies.

Before the currency crisis of March 2011, investment programmes were a major tool to support technological renovation. These programmes were implemented with the help of cheap loans from state-owned banks. The 2012 World Bank memorandum on Belarus reveals that directed loans are typically three times cheaper than market loans.

At the same time, the gap between factor productivity of state-owned and private companies vary from 20 to 30 per cent on average. Private firms tend to be more efficient than state-owned enterprises.

This fact implies that the efficiency of state investments is lower than private ones. Prior to the currency crisis, directed loans amounted to a half of the total volume of loans, granted typically to agriculture and housing production.

According to a study, conducted by the BEROC researchers in December 2012, the expansion of these loans has not contributed to the improvements in total factor productivity, which reflects the efficiency use of capital and labour in the economy.

Modernization appears to be a call for a more productive use of funds, but there is little evidence in favour of changes in incentives of recipients of state financial aid. Moreover – and this is probably the crucial aspect – private domestic and foreign investors are not considered seriously as major actors of modernization. If foreign borrowing, and not a foreign investment, continues to be one of the sources of foreign cash to purchase equipment from abroad, then macroeconomic stability can be threatened.

Apparently, private investors can be more efficient in implementing modernization plans without state guidance. However, some recent steps of the authorities might keep them away from entering the scene. In particular, nationalisation of two confectioneries and planned amendments to privatisation legislation, stipulating the reservation of special places for state representatives to vote for the absent minority shareholders are the measures that lie far from improving domestic business climate.

There is a worrisome tendency that increase in real investment is associated with higher foreign indebtedness and lower net exports (see Figure 2). 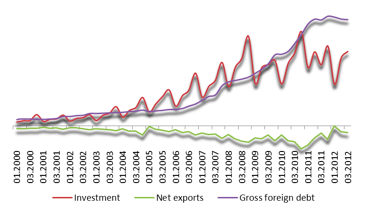 Therefore, modernization – even it is understood narrowly as a mere technological upgrade – might bring temporary gains in the form of higher output growth rates, but it contains considerable risks. It is too early to make conclusive statements, but suspicions come from the lower capacity of state-owned enterprises to function as efficiently as enterprises in the private sector.

Without expansion of the private sector and incentives to private investment, the Belarusian economy might continuously require injections of liquidity in the form of state-guaranteed loans. These injections would increase the economy’s volatility without addressing the fundamental efficiency problem. Instead, a vicious circle of more funds–more growth could emerge, with severe inflationary repercussions and high costs of breaking with it.

To summarise, contemporary modernization plans look so far as “old vine in new glasses”. If that is the case, then seemingly new policies would have a limited success. However, if compounded by the measures to support the development of private sector, economic growth can be made more sustainable and less volatile.

This article is a part of a new joint project between Belarus Digest and Belarusian Economic Research and Outreach Centre (BEROC) – a Minsk-based economic think tank.