Belarus: The Great Patriotic War vs the Second World War

On 9 May the annual parade took place in Minsk to honour the victory in the Great Patriotic War against Nazi Germany. According to today's official statistics during that war every third Belarusian inhabitant died. Nazis killed around  600-800...

On 9 May the annual parade took place in Minsk to honour the victory in the Great Patriotic War against Nazi Germany. According to today’s official statistics during that war every third Belarusian inhabitant died. Nazis killed around  600-800 thousand Jews, 80% of the total Jewish population of Belarus.

Remembering the war which started in 1941, after Germany’s attack against the Soviet Union, Belarusian authorities prefer to forget that the Second World War started not in 1941, but in 1939, when Hitler and Stalin were allies.

This year state media reported thousands of people were taking part in celebratory procession on the main street of Minsk including war veterans, members of labour collectives and children. Alexander Lukashenka and his youngest son Mikalay headed the procession.

The celebrations surrounding Victory Day and Independence Day in today’s Belarus very much resembles the celebrations which took place in the Soviet Union. Military parades and procession of athletes are followed by a speech by a political leader.

Every year, depending on the foreign conjectures in his speeches, Alexander Lukashenka typically constructs an image of a foreign enemy. It could be NATO, the government of the United States, nationalists in Latvia or “arrogant European officials”. This year Lukashenka decided to speak about the threat from the West. According to him:

Sovereign Belarus is constantly at a gunpoint of the undeclared cold war. Some people in the West have not been able to accept the fact that Belarus has not become another “banana republic,” dancing to the tune of transatlantic democracies. We are stifled by sanctions. They sling mud of slander at us. Along our borders NATO warplanes are flying, new bases are opening, provocations are being plotted.

The tradition of celebrating Victory Day started in the 1960s in the Soviet Union. From that era, the Soviet propaganda machine was constructing the myth of war aimed at creating a model of a Soviet patriotism. The basic foundation myth consisted of Soviet society’s political unity, the leadership of the Communist party and heroism of the Soviet people during the war.

The Great Patriotic War vs the Second World War

The Great Patriotic War started on 22 June 1941 when the Nazi invaded the USSR and ended on 9 May 1945. Such periodisation does not include the Winter war between Finland and the Soviet Unionin 1939-1940, the Soviet occupation of the Baltic states in 1940 or the division of Poland in autumn 1939 according to a secret protocol of the Molotov-Ribbentrop pact. Nor does it address that while German and Soviet armies occupied Poland, they organised a joint Soviet-German military parade in the centre of Brest-Litovsk (today Brest), a Belarusian city near the Polish border on 24 September 1939:

The Belarusian educational system almost exclusively focuses on the period of the Great Patriotic War, conveniently forgetting that the Second World War started in 1939, not in 1941. First year students of Belarusian universities even have an obligatory course titled: “The Great Patriotic War of the Soviet People (in the context of the Second World War)”.

The course continues the tradition of Soviet historiography where only the Soviet point of view dominates. The course textbook ignores certain uncomfortable topics such as joint Nazi-Soviet activities prior to 1941, discrimination of Ostarbeiters (Belarusians taken out to Germany as forced labourers), it fails to mention the Katyn massacre or treatment of the Soviet troops of Central Europe’s civilian population in 1944-1945.

Glorification of the War in Lukashenka’s Belarus

In 2005, the year of the 60th anniversary of victory in the Great Patriotic War, in order to perpetuate the heroism of Belarusians, state authorities renamed two central Minsk streets. Francysk Skaryna Avenue, named after a great Belarusian culture figure of the 16th century became Independence Avenue (Praspekt Nezalezhnasci). Masherov Avenue named after a former Communist leader of Belarus became Victors Avenue (Praspekt Peramozhcau). Both of the two new names refer to this constructed war mythology.

The same year a new memorial Stalin Line opened near Minsk.  According to its official web page, the memorial marks a system of defence installations and symbolises the heroic struggle of the Soviet people against the Nazi invaders.

While Victory Day is a Soviet holiday, Independence Day is the second official holiday which is bound up in the Great Patriotic War. It is celebrated on 3 July and, unlike Victory Day, its genealogy starts in independent Belarus.

The authorities moved the Independence Day to 3 July after a referendum in 1996 which specifically included this question. That day symbolises the liberation of Belarus from the Nazi invaders. The previous Independence Day date was 27 July and referred to the Declaration of State Sovereignty in 1991, following the collapse of the Soviet Union.

The two most important state celebrations in Belarus – Independence Day and Victory day serve a useful purpose for the Belarusian political regime. As with many other authoritarian regimes, the Belarusian state is looking for external enemies to justify failures in economics and foreign policy.

This April, the region of Paliessie in southern Belarus experienced annual flood caused by major local rivers. The flood was the largest in decades.

Yet Paliessie is famous not only for floods that turn towns and villages into islands. The region’s population presents a distinct ethnic group within the Belarusian nation. They speak a peculiar dialect and retain many features of traditional lifestyle.

Belarusian protestant communities are very concentrated in the region. Their way of life differs a great deal from that of their Orthodox compatriots. Previously, Paliessie was one of the Jewish centres of Eastern Europe and many famous Jews come from here.

Because of its unique nature, culture and history, Paliessie became a popular tourist destination in Belarus.

Belarus has no access to the sea, but once a year some Paliessie spots turn into islands surrounded by water. Geographically, Paliessie lies in the lowlands, where two major Belarusian rivers, Prypiac and Dniapro, flow. These natural conditions make Paliessie vulnerable to floods, which occur annually in spring. The 2013 flood turned out to be one of the largest in recent decade. Here is a typical picture of a flooded village:

For people who are used to a comfortable city life such floods look like a disaster. But paliašuks (this is how they call themselves) take it easy. They have gotten used to such phenomena since childhood and perceive them as the natural state of things. Every family usually has a boat to move between their yards and mainland during the flood. Children sail to school and their parents to work. When water comes too close or even inside the houses, people construct devices to raise their house and even animals in sheds.

However, even these sophisticated means of adaptation do not help, if the situation becomes too extreme. For that reason the Belarusian emergency service is especially busy during the flood period. They move people and animals, build dikes, distribute food and other products when people are unable to reach mainland and do other kinds of emergency work.

People of the Swamps

Ethnically and linguistically, Paliessie presents a peculiar case. Some scholars consider Paliašuks a separate ethnic group within the rather homogenous Belarusian nation. This group has formed and preserved their distinctiveness very much due to natural conditions which isolated them from the rest of population.

Linguists believe Paliessie dialect to be a transitional dialect between Belarusian and Ukrainian language, as it contains elements of them both. In the beginning of 1990s, a separatist movement emerged which sought to create a Paliessie language. However, the movement did not become popular among locals and soon declined. 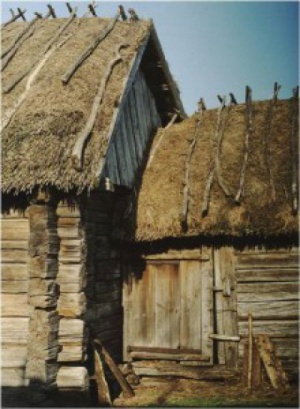 Paliessie has always been a treasure house for ethnographers and linguists, as it preserved many ancient features in the way of life, culture and language. However, Paliašuks has never held a strong common identity. They have acknowledged their distinctiveness but call themselves “tutejšyja” (the locals) when asked about their own identity.

Before the World War II, Palessie was one of the centers of Jewish life in Eastern Europe. Quite a few famous people of Jewish origin descend from here.

Chaim Weizmann, the president of the World Zionist Organisation and the first president of Israel was born in Motal village near Pinsk and received his first education here. Golda Meir, the fourth prime-minister and the “Iron Lady” of Israeli politics lived in Pinsk with her family for some time before they emigrated to the United States. The winner of 1971 Nobel Prize in Economics, Siamion Kuźniec (Simon Smith) also came from Pinsk, where he was born and studied at a local gymnasium. Another famous Pinsk scholar, David Shoenberg, became professor of Physics at Cambridge University.

Early ethnographers of the Russian Empire depicted Paliašuks as a gloomy and unhappy people with weak health and a widespread hair illness. Today, however, Paliessie demonstrates highest birth rates in Belarus and is famous for its strong local communities. The main reason for such developments seems to be tied to a religion not common in other Belarusian regions – Protestantism.

The Miracle of Paliessie Protestantism

Protestant communities began to spread in Belarus in 1920-1930s, but soon the communists destroyed most of them during Stalin's rule. Until the 1970s, authorities constantly persecuted the protestant church. Nevertheless, the communities continued to exist and flourished after the collapse of the USSR.

The Brest region, the western part of Paliessie, presents the centre of protestant communities in Belarus. Protestants differ significantly in their way of life compared to regular Belarusians. Protestant families often have more than five children, while normally Belarusians have one or two. Protestants do not drink alcohol, while in some Belarusian villages alcoholism killed every single man. 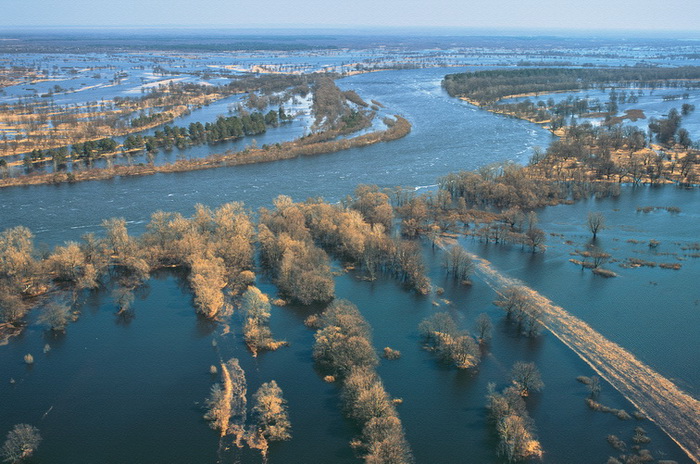 No wonder the region looks rather positive in terms of its social indicators. It has the youngest population in Belarus and higher average household income. For example, the whole Alšany village, one of the biggest protestant communities in Belarus, deals with the cucumber business.

Every family has greenhouses where they toil day and night. Remarkably, local children do not want to go to big cities in search of a better life. They stay in the village and continue their father’s business. “Why should we go to the city? Here, on the land, we can make more money during one season than you will make during your whole life”, they say.

Paliessie as a Tourist Destination

Due to its unique nature, culture and history, Paliessie became popular among Belarusian as well as foreign tourists. Some people seek the ancient way of life which still exists in local villages.  For instance, in some places the roofs of the houses are still covered with reed.

For some categories of tourists, the tour in areas contaminated by Chernobyl presents a real adventure.

Others enjoy struggling through vast swamps and woods. Actually, Paliessie's wetlands appear the largest complex of wetlands in Europe that have preserved their natural environment.

Paliessie has a great potential for tourism as it offers experiences and adventures for those who like unusual experiences, hidden just a few kilometres from the EU border.