Belarus Digest starts a series of articles on tourism in Belarus prepared by Nigel Roberts, a a UK-based freelance travel writer specialising in Belarus.

I first visited this extraordinary and much misunderstood country in 2001. I have returned many times... 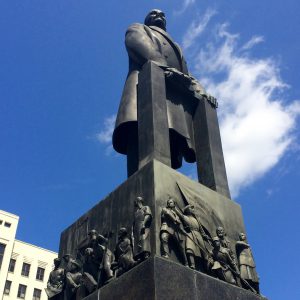 Belarus Digest starts a series of articles on tourism in Belarus prepared by Nigel Roberts, a a UK-based freelance travel writer specialising in Belarus.

I first visited this extraordinary and much misunderstood country in 2001. I have returned many times since then to explore widely, initially working on sustainable development projects with families in communities blighted by the Chernobyl catastrophe.

Then from 2005 I was also researching material for my travel guide to Belarus, first published by Bradt Travel Guides in 2008. The latest (and third) edition reached the bookshelves earlier this year.

The first two editions have sold well, as does the third. I receive regular correspondence from readers around the world. More and more online resources showcasing Belarus appear regularly. There is clearly growing interest in the country as a destination for travellers. So what can the first-time visitor expect to find? What are the treasures that await?

For many (though not all), the jumping-off point is Minsk National Airport. Situated 40 kilometres east of the city on an extension of the M2 motorway, access to the capital via bus, cab and express train is good. The airport itself has recently undergone significant refurbishment, as befits its status as the point of arrival and departure for all international flights.

Minsk itself was almost completely destroyed by the Nazis in World War II and was honoured with official recognition as ‘Hero City of the Soviet Union’ in 1974. After the conflict, Stalin ordered it to be rebuilt in a manner that would stand testament to the might, resilience and ingenuity of Soviet communism. It remains one of the best examples of post-war Soviet Utopian urban planning, with cavernously wide boulevards, grandiose brutalist architecture and wide-open spaces, where the eye is always drawn up and to the horizon.

Amongst my favourite places are Pobyedy Park, now home to the splendid and recently relocated State Museum of the Great Patriotic War; Nyezalyezhnastsi Avenue, the city’s main thoroughfare, ideal for promenading and people-watching, where a number of major squares are also to be found; and the National Library, an eye-catching and most unusual building of unique geometric proportions.

Perhaps my favourite place of all is the Central Bookstore (Tsentralnaya Knigariya) at 19 Nyezalyezhnastsi Avenue, where a myriad of glossy pictorial guides, maps, postcards, posters and calendars make excellent souvenirs to take home. And for a taste of high culture, take in a glorious opera or ballet performance at the National Academic Bolshoi Opera and Ballet Theatre of the Republic of Belarus. 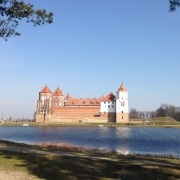 For those with a yearning to see more of the country, a number of day trips from the capital are readily accessible. Around 90 kilometres south-west is the stunning 16th century Mir Fortress, former home of the ‘big baron’ Radzivili family, and one of the country’s four UNESCO World Heritage Sites. 30 minutes further south-west by road and 120 kilometres from the capital lies another, the delightful historic settlement of Njasvizh with its beautiful moated palace, also dating from the 16th century and also formerly in the ownership of the Radzivilis.

If you have stamina for a long day out, the 14th century castle ruins at Novogrudok, 40 kilometres north-west of Mir, are also worthy of a visit. Then for a significant clue to understanding the collective national psyche of the country today, visit the National Memorial Complex at Khatyn. Only 75 kilometres from Minsk, this deeply affecting and doleful memorial was constructed on the site of a former village that was razed to the ground in the spring of 1943 and its inhabitants brutally butchered. A visit here is a must-see.

Not all visitors will arrive by air of course, and for those who travel by train the most likely point of entry into the country will be in the south-western corner, at Brest. It’s a real border town of energetic hustle and bustle, as well as a significant staging post on the Berlin-Moscow railway line and the main intercontinental highway from east to west. The most important site of interest is the Hero-Fortress, a strategically crucial complex featuring extensively in a number of historical brutal conflicts, most notably under siege on the first day of Operation Barbarossa, Hitler’s invasion of the Soviet Union in 1941. Tales of heroism and privation abound here.

Brest is the location of my favourite restaurant in the whole of the country, Jules Verne on Gogolya Street. It is also the gateway to the wonderful Byelovezhskaya Puscha State National Park and Biosphere Reserve, another UNESCO World Heritage Site and home to several hundred European bison. It is also possible to visit Grandfather Frost in his own natural environment …

Situated in the north-western corner, Hrodna (also spelled as Grodno) is an elegant city of grace and charm. It has one of the largest concentrations of Roman Catholic worshippers in the country and is a centre of Polish culture. The region abuts Poland and the western border of the country has moved significantly east and west at times in history. Catholicism dominates much of the architectural heritage, but the striking Drama Theatre, which would not be out of place in a scene from Tolkien’s Middle Earth, is also worthy of note.

The lovely city of Vitebsk in the north-east is regarded by many as the cultural capital of the country. The much-loved Slavyansky Bazaar festival is held here every summer, and there are numerous sites of interest connected with favoured son Marc Chagall. The oldest town in all Belarus, Polotsk, is located within this region.

The sites mentioned here are a tiny taster of all there is to be seen and experienced. From my first visit 14 years ago, the single feature that has dominated all my time here continues to be the unconditional hospitality of ordinary people. Sometimes wary at first, with familiarity comes trust and a willingness to openly share. It’s the country’s greatest treasure. I invite you to see for yourselves.

Nigel is a UK-based freelance travel writer specialising in Belarus 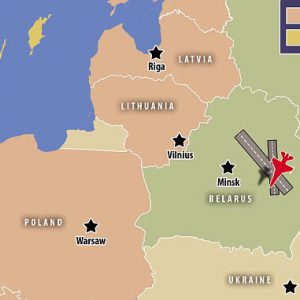 Potential Russian Air Base in Babryusk.

Other significant news: The EU might lift sanctions after Lukashenka freed 6 political prisoners. A decision may lift Lukashenka’s travel ban and allow some Belarusian companies to trade with the EU.

Russia moves to establish air base in Belarus – Deutsche Welle reported that Putin stated recently ordering the Defence Ministry to begin negotiations with Minsk over a Russian air base. Minsk stated it would not welcome the base. However, it is reliant on Russian energy, credit and already has Russian military facilities. This makes it unlikely Minsk will deny its building.

With the Ukraine crisis, the Kremlin estimates it needs to bind Belarus closer. Yet, for Valery Karbalevich “against the background of the Ukrainian crisis, the stationing of a permanent Russian military contingent in Belarus will upset the balances of forces and facilitate an increase in tension in the whole region”.

The air base, according to EurasiaNet, has caused consternation among Belarusian elites. The Russian government has pushed the issue. It published a document alleging an agreement. It will be built near Babruysk in 2016. According to the agreement, Minsk cannot monitor the base, receive money for staging the base and Russia can put any weaponry on the base’s territory.

Sections of the western media believe that Minsk's delay could herald Russian intervention similar to Ukraine.

European Union considers removing Sanctions on Belarusian Elites and Companies – An article published by Reuters contended that with the release of 6 political prisoners; the EU is considering reducing sanctions on Minsk. EU diplomats are contemplating ways to reduce asset freezes and visa bans on Belarusian elites. Reuters contends that diplomats are planning freezing sanction renewal for a year. These could extend to Lukashenka. Diplomats are considering lifting trade restrictions on 25 Belarusian companies. However, the EU will retain sanctions on military elites and companies.

In other economic news, according to Reuters, the network provider Turkcell has stated that its Belarusian unit, Belarusian Telecommunication Network (BEST) is now debt free.

Ales Mikhalevich Arrested upon return to Belarus – Deutsche Welle published an article that border guafrds arrested Ales Mikhalevich​. He was an opposition figure who stood at the 2010 presidential elections. After a 5 year exile in the Czech Republic he decided to return due to the release of political prisoners “I want to live in Belarus, in my homeland. I want to be with my family. I always said that when all political prisoners are freed…I will return immediately”.

Yet on his return, border guards quickly arrested him at the Belarusian-Lithuanian border. They released him, but told him not to leave Minsk. This is all the more bizarre as another opposition activist returned, but was not arrested. Vyacheslau Siuchyk has vocally stated he will compete in the elections. Yet, unlike Mikhalevich​ he has not been arrested.

300 Opposition Activists Call to boycott the October Presidential Elections – A group of 300 demonstrators protested in central Minsk according to the Washington Post. They called for an election boycott. Mikalaj Statkievich, an opposition activist, held an unauthorised rally. Statkievich was only released from prison last month. But he called on Belarusians to boycott the upcoming presidential elections. Other opposition activists, Anatol Liabiedzka and Uladzimir Niakliajeu called for a united opposition.

Lukashenka Publishes $31,000 Income Statement – Bloomberg published an article stating that for the upcoming elections Lukashenka submitted an income statement of only $31,000 per annum. The statement does not mention houses or cars.

In other electoral news, 3 candidates other than Lukashenka registered with the central electoral commission on the final day of registration. Bloomberg contends that the Belarusian regime hopes this will create a veneer of democracy and appease the west.

Minsk Residents defend a Blind Man – An article and video posted by Radio Free Europe/Radio Liberty shows police dragging a blind man down some steps and banging his head on metal railings. Passersby intervened on the man's behalf. But police arrested him for being 'unkempt' and 'violent'.