Belarusian Writers and the Soviet Past 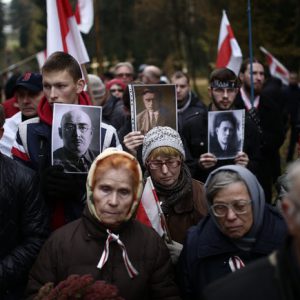 On 1 November, the Conservative Christian Party of Belarus held a street rally in central Minsk to commemorate the dead, Dziady, authorised by the Minsk city and regional governments.

The events focus on aspects of the Soviet past that the Belarusian leadership has largely ignored or concealed. Not only have Stalin’s crimes been glossed over, but so have recent tragedies in Belarus such as the consequences of the 1986 accident at the Chernobyl nuclear plant. Writers who have tried to draw attention to these events have faced profound difficulties.

This article cites the examples of three prominent Belarusian writers, one writing before the presidency of Aliaksandr Lukashenka and two during his tenure in office. They illustrate that the leaders of Belarus have failed manifestly to address the crimes of Stalin and other consequences of Soviet rule.

These three Belarusian writers demonstrate the dilemmas of probing into such controversial topics in current-day Belarus whereas its southern neighbour Ukraine is attempting to eradicate all traces of its Communist past. All became alienated from the modern state.

Vasily Bykau (1924-2003) was Belarus’ best known writer, largely as a result of his accounts of the war years, which he experienced in the ranks of the Red Army in the Second and Third Ukrainian Fronts as the Red Army advanced through Eastern Europe. 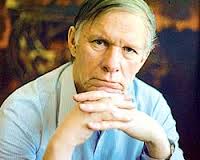 Though recognised for his talents, his starkly realistic accounts contrasted with most Soviet writing on the ‘Great Patriotic War’. He provided an antidote to the ritualistic pantheon of great victories and heroism, particularly his book “The Dead Feel No Pain” (1965). Bykau achieved fame in the USSR through Russian translations of his works, which he wrote in Belarusian.

Bykau and Lukashenka proved incompatible compatriots and in December 2002, the former Secretary of the Hrodna section of the Belarusian Union of Writers emigrated to the Czech Republic with the support of the Czech Chancellor and playwright Vaclav Havel, thereafter visiting his homeland only a few times. Shortly before his death he returned to Belarus where he died of stomach cancer in a Minsk hospital. Over 50,000 attended his funeral, which was notable for the absence of government officials, including the president.

Adamovich, born in 1927, was too young to be called up to the Red Army but served in a partisan unit during the war. From the 1950s to the early 1990s he wrote several books about the war that brought him fame, most notably Khatynskaya Povest’ (The Khatyn Story, 1972), about the massacre of residents of the village some 30 miles from Minsk, which now holds the well known heritage site. 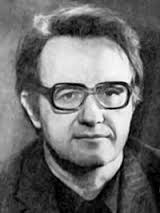 Like Bykau his genius lay in capturing the true nature of the war, portrayed with searing honesty in his screenplay written with Elem Klimov Idi i Smotri (Come and See, 1985), which was released on the eve of Glasnost, allowing for wide dissemination of the movie about a teenaged boy during the German occupation of Belarus.

Like Bykau, Adamovich, who held a doctorate in philology, emigrated from Belarus—this time to Moscow. In the declining years of the USSR, Adamovich supported the formation of the Belarusian Popular Front and tried to draw popular and official attention to the problems engendered by the 1986 Chernobyl accident.

Adamovich wrote in both Russian and Belarusian, and had a wide influence over Belarusian writers of the following generations, not least Sviatlana Aliakseevich, who emulates his model of conveying realities through literary fiction, often based on actual events or popular memories. Adamovich died on January 26, 1996, ironically the same day that Stanislav Shushkevich was ousted from power in Belarus as a result of charges brought by a parliamentary committee on corruption chaired by Lukashenka.

Sviatlana Aliakseevich: the “Cultural and Mental Backwardness of Our People”

Aliakseevich, born in May 1948 in Ivano-Frankivsk to Belarusian father and Ukrainian mother, was raised in Belarus and has written on the Second World War, the Soviet war in Afghanistan and Chernobyl. On the former, she wrote about the experiences of women and children, and like her mentors, she added provided realistic accounts.

Most of the works of Aliakseevich were published outside Belarus and she lamented Belarusian society under Lukashenka. In an interview Yulia Shymko and I held with her in April 1998, she stated: “Certainly it would be preferable to have Vaclav Havel as president, someone who permits society to progress without provoking its worst features. But, on the other hand, Lukashenka simply reflects the cultural and mental backwardness of our people.” 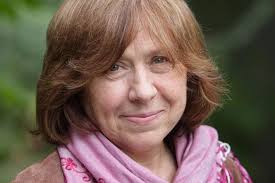 In 2000 she moved abroad, living in France, Sweden, and Germany, but returned in 2011. On 8 October 2015 when she was awarded the Nobel Prize for Literature, the Belarusian president could hardly ignore her and offered grudging praise, but shortly afterward the two resumed hostilities: the president accused her (October 25) of throwing “a bucket of dirt” on Belarus. She retorted that her critiques targeted “the regime, not its people.”

These three writers represent the conscience of Belarus. They laboured under complex conditions that were not eased by the collapse of the Soviet state. The state tried to uphold many ideals of the USSR, not least its interpretation and memory of the war.

Lukashenka personally concealed the inquiry into the mass shootings at Kurapaty, just as he did the effects of Chernobyl by declaring that the catastrophe had been overcome—symbolised by the construction of Belarus’ first nuclear power station on the border with Lithuania.

Even these featured writers rarely highlighted the destruction of virtually the entire Belarusian cultural elite in 1937-38, which has sparked the recent demonstrations. Yet it is thanks to their writings that an alternative perspective of the Soviet past remains.

David Marples is Distinguished University Professor, University of Alberta and author of 'Our Glorious Past: Lukashenka's Belarus and the Great Patriotic War (ibidem-Verlag​, 2014). 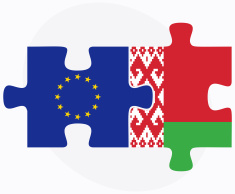 The sanctions were suspended ​“in response to the release of all Belarusian political prisoners on 22 August and in the context of improving EU-Belarus relations”. Ironically, the move comes a few weeks after the facade presidential election in October 2015.

The move shows that the EU's expectations of Belarus have become much lower. In the late 1990s the West expected from Belarus free and fair elections and greater respect for human rights. A regime change in Belarus looked realistic then. Twenty years later the main expectation of the European Union is not significant political changes but avoiding violence against political opponents and securing the release of political prisoners.

Although the European Union is not for the first time changing its policy from one of sanctions to engagement, fundamentally little has changed inside Belarus over the last decade. Freedom House rankings of Belarus show almost the same scores for democracy, independent media and civil society in that period. The authorities conduct elections which are neither free nor fair, imprison and then release their political opponents and keep civil society under pressure.

The changes in the European Union's​ approach reflect not so much changes inside Belarus but changes in the regional context. In the late 1990s Russia looked like an emerging democracy moving in the right direction. Lukashenka was an abnormality who had to be ostracised. Belarus as a small and unimportant country was easy to sanction.

Now Vladimir Putin is rigging elections, staging wars in the region and conquering foreign territories. This makes Lukashenka look rather mild. He even appears as a guarantor of peace and Belarusian independence against the background of the Ukraine crisis.

But although Russia is busy with wars in Syria and Ukraine, Belarusian statehood and independence today is more vulnerable than ever. In the post-Crimea world the tolerance for violence in the post-Soviet region has increased. Russia's appetite for influence in the region is growing. Instead of supplying Belarus with war planes, Russia wants to provide its pilots as well.

The minds of Belarusians are also under pressure from Russia. Most people in Belarus watch Russian television as their main source of news, exposing them to high doses of anti-Western propaganda. The Belarusian authorities would like to replace this with their their own propaganda but are unable to do so without angering Russia. For the same reason, the Belarusian regime considers it foolish to make any significant moves towards the West, and instead prefers to stay in the shadow of Russia.

Lukashenka has made the country extremely vulnerable and dependent upon Russia. This does not mean, however, that Belarus should be punished for it and abandoned because of Europe's fatigue and preoccupation with other problems.

The European Union should not just lower its expectations but take more active steps to become more visible and influential inside Belarus. This should include long-term programmes in the area of education, scholarly exchanges in the framework of the Bologna process, and strengthening the civil and national identity of Belarusians.

Finally, it is important to lower the visa barrier. Ironically, while hundreds of thousands of migrants cross the European border without any visas, Belarusians have to undergo long, expensive and often humiliating procedures to go to the West. It happens not because the government prevents them from leaving, as in the Soviet times. The main obstacle is that European Union states prefer to issue short-term visas and charge the full price.

Belarusian nationals face much stricter visa requirements than citizens of Russia or Ukraine. The policy of the European Union towards Belarusians should remain favourable even when the government of Belarus does not want to liberalise or open up the country. It is in the long-term interest of both the people of Belarus and the European Union to do so.