Belaruskali: The Enterprise that Saved Belarus in 2015

In spite of weak commodity markets, the state-owned company's annual export revenues are likely to be roughly the same as in... 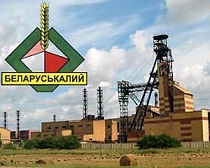 In spite of weak commodity markets, the state-owned company's annual export revenues are likely to be roughly the same as in 2014. Were it not for Belaruskali, the recent slump in the Belarusian economy would be even worse.

Belaruskali made headlines in July 2013 when it dissolved its joint venture with the Russian potash giant Uralkali, heralding the end of the Belarus-Russia "potash cartel."

So far, the Belarusian authorities seem satisfied with the breakup. Belaruskali has successfully rebuilt after the split and surprised its competitors by winning contracts through a combination of low prices, increased production, and successful marketing.

The Most Valuable Enterprise in Belarus

Before the split, the Russian-led cartel took advantage of the heavily concentrated potash market (the only other major producers are Canada and China), forcing up prices by limiting supplies.

As a member of the cartel, Belaruskali was bound by this "price-over-volume" cartel strategy. As a result, it failed to generate enough sales to plug deficits in the Belarusian state budget. Before long, Belaruskali and Uralkali started to cheat each other. The escalating conflict led to the arrest of Uralkali's CEO Vladislav Baumgertner in Belarus, and eventually to the split between the cartel partners. 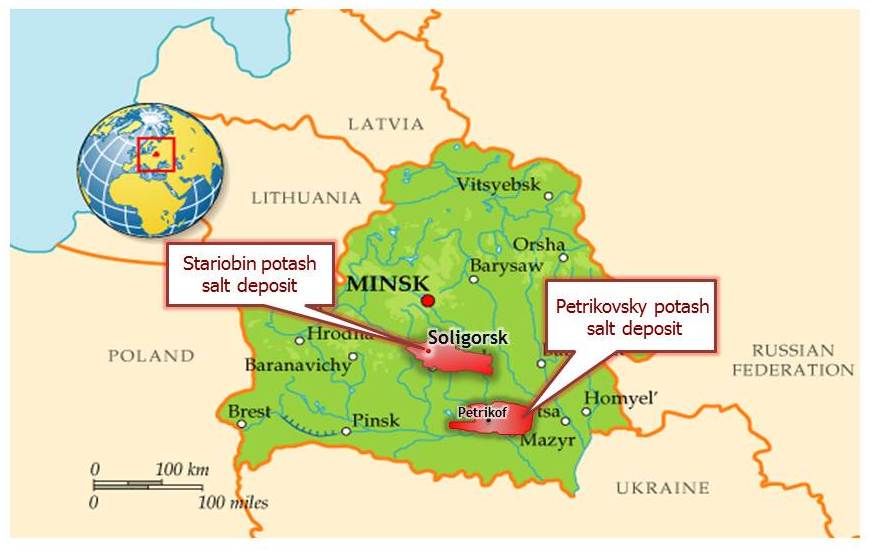 Contrary to expectations, Belaruskali's revenue increased following the split. In 2014, exports of Belarusian potash fertilisers amounted to about $3 billion, or 6% of Belarus’s total export revenue.

In 2015, the amount may be slightly lower because of the decline in global potash prices, but still approximate $3 billion. Belaruskali is also helping the government to balance its books — according to the Ministry of Taxes and Duties, Belaruskali paid almost half of the budget of Minsk region in 2015.

The success of the Belarusian potash giant enables Belarus to subsidise dozens of inefficient, loss-making "zombie" companies, such as Belarusian machine building enterprises.

Moreover, Belaruskali confers international prestige on Belarus. The company remains Belarus's only truly global business, and is a mainstay in the foreign business media. Its success also demonstrates that a state-run Belarusian enterprise can succeed even when in conflict with a Russian competitor.

What Belaruskali Accomplished in 2015

Belarus may not have made many new friends in the international arena over the past year, but it certainly has been a boon to farmers around the world, who are benefiting from low potash fertiliser prices. Belaruskali's strategy of selling large volumes at low cost has helped it to increase market share and conquer new markets.

In March 2015, Belaruskali made ​​a deal with a consortium of Chinese buyers at $315 per ton, about $15-25 below the price offered by its competitors Uralkali and Canpotex, the North American potash cartel.

On 8 December, Belarusian Potash Company, a trader of Belaruskali, signed a memorandum of understanding to supply Vietnamese companies with fertilisers in 2016-2018. Belaruskali has also made headway in South America, India and even the United States, where it faces protectionist policies. 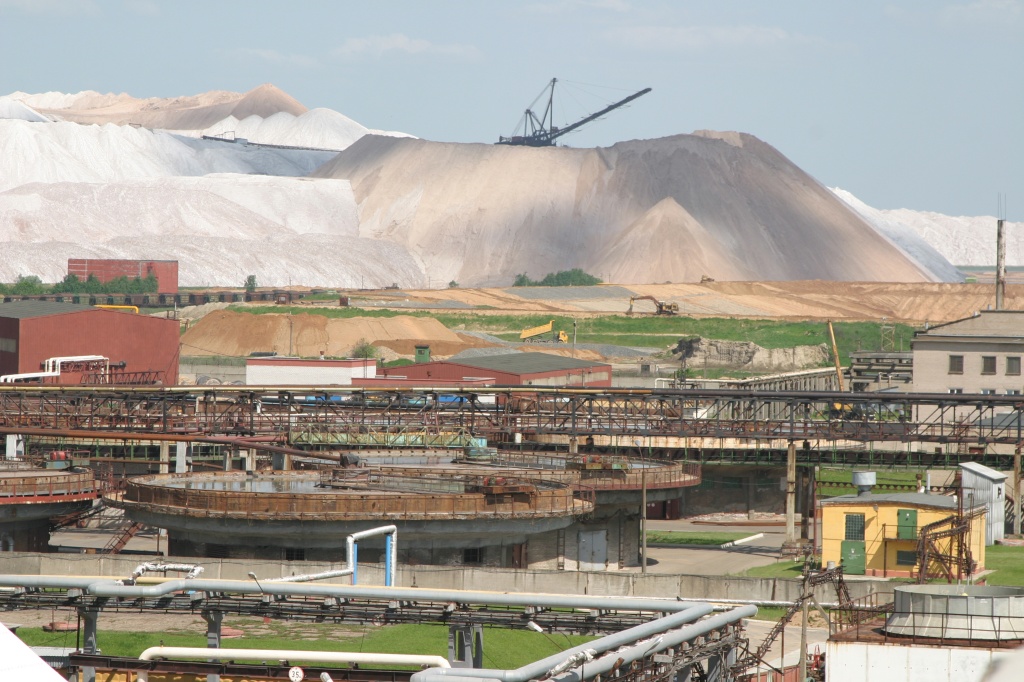 At the beginning of 2015, Alena Kudravets, the director of the Belarusian Potash Company, stated that "every fifth tonne of potash fertilisers in the world comes from Belarus." She deserves credit for much of the success of the Belarusian potash giant. Belarusian President Alexander Lukashenka sang her praises in September 2015, calling her "a small girl from Salihorsk who saved everybody."

Will Saving the Economy Threaten Belaruskali?

Belaruskali's "volume-over-price" strategy did much to keep the Belarusian economy afloat in 2014 and 2015. According to Autushka-Sikorski, the strategy made sense because it preserved market share by undercutting competitors.

However, the strategy of maximising output threatens the long-term existence of Salihorsk, the town where Belaruskali is based. Salihorsk residents are afraid that at the current rate of production, potash deposits are being depleted, and in 15 to 20 years there will be nothing left.

A few years ago, one miner told me that “everything is great in Salihorsk, but what will we do when the salt runs out?" In 2011, Belaruskali officials estimated Belarus's potash resources to last up to 40 years, according to Bielarusy i rynok (Belarusians and market). Yet at the current pace of production, the minerals may run out sooner. Indeed, the current strategy of favouring volume over price threatens Belaruskali's own existence in the long term.

This year, Autushka-Sikorski says, the trends of 2015 are likely to continue, with supply outpacing demand. The price will drop further, forcing Belaruskali to exhaust yet more of Belarus's precious resources in order to generate sufficient revenue for a teetering economy. 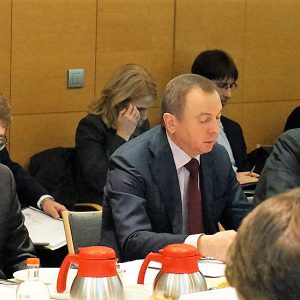 Belarus’ relations with Europe have found a new lease of life after the suspension of the EU sanctions against Minsk. The EU’s intends to double its financial assistance to Belarus in 2016.

The EU also sent a delegation to Minsk, which announced several forthcoming cooperation projects with Belarus. The visa facilitation agreement is almost ready for signing.

The big question remains what Belarus is willing to offer in return besides its role of a regional “donor of stability”.

Belarus’ trade relations with Germany, one of its priority partners, require immediate attention. In January – October 2015, the Belarusian exports to Germany fell by 36% compared to the same period of the previous year, down to $931m. 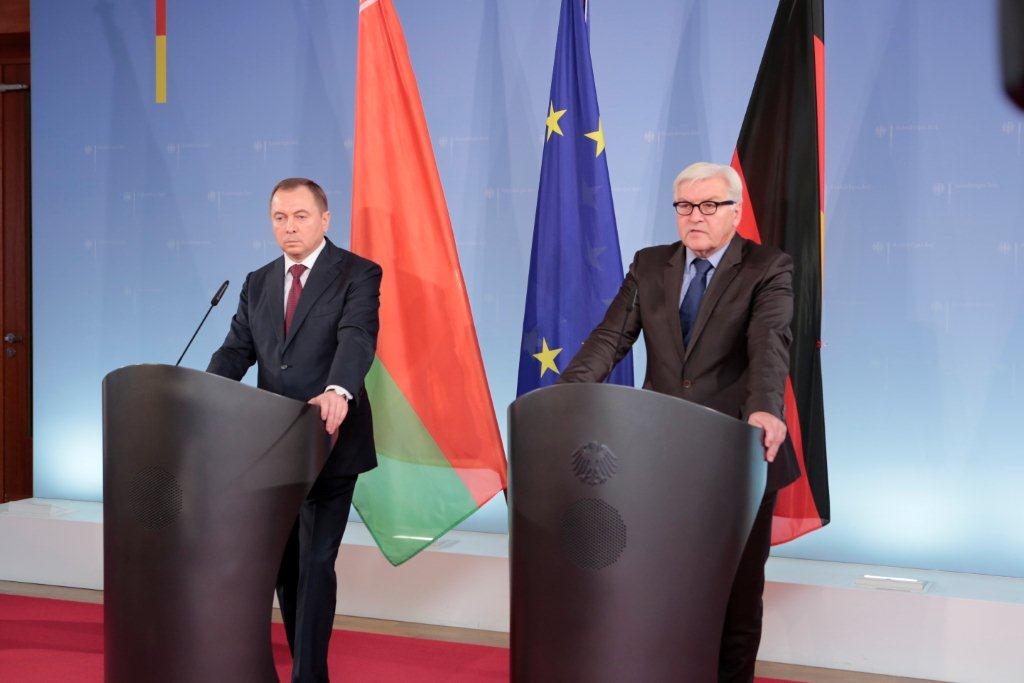 Makei stressed at a press conference in Berlin that “normal economic relations with the European Union and individual European nations… would help [Belarus] to be stronger in the political terms”. In the meeting’s context, this could only mean the strength to withstand the growing Russian pressure.

Speaking to the press, Steinmeier sounded optimistic about the prospects of Germany’s ties with Belarus, which he called a “major country to the east of us”. “The quality of our dialogue… has improved,” said the German minister.

Recalling the EU decision to suspend the sanctions, he spoke about a “certain trust in advance”. The meeting with Makei made Steinmeier “absolutely confident” that “this year's trends in Belarus… would continue and grow stronger”.

… and makes a low-key trip to Brussels

On 14 December, Vladimir Makei travelled to Brussels on a working visit. The foreign ministry’s press service reported him meeting EU foreign ministers there. Judging by the photos released by the MFA, they met at a working breakfast.

On that day, the EU Foreign Affairs Council discussed a number of issues including the relations with Europe's eastern partners. “The Council agreed that the EU should continue to pursue its policy of critical engagement with Belarus”, the only reference to Belarus in the final document said.

Meanwhile, the EU press service has failed to provide any mention of Makei’s encounters in Brussels. Foreign ministers of Austria, Lithuania, Slovakia tweeted about the constructive mood of the EU ministers’ informal talks with Makei and expressed hope for further positive developments. 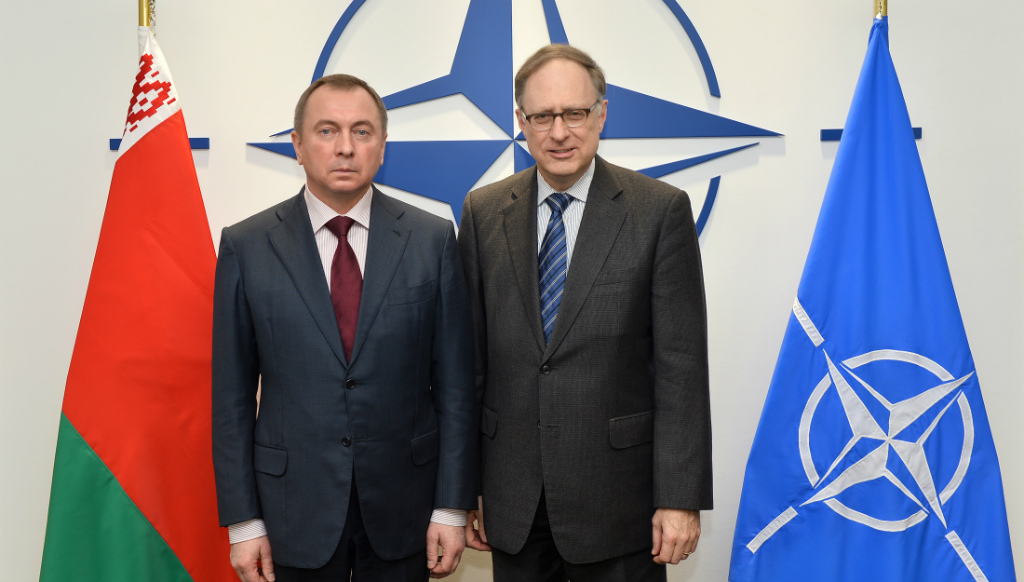 The NATO’s press service announced a meeting of the Alliance’s deputy head Alexander Vershbow with Makei on the same day but issued no communication on the outcome of their talks.

However, the very fact of this meeting against the backdrop of Russia’s ever-worsening ties with the NATO has confirmed that Belarus tacitly pursues its own agenda in the relations with the Western world.

In addition to these major meetings, Belarusian diplomats have been actively reinvigorating the country’s bilateral ties with European nations. 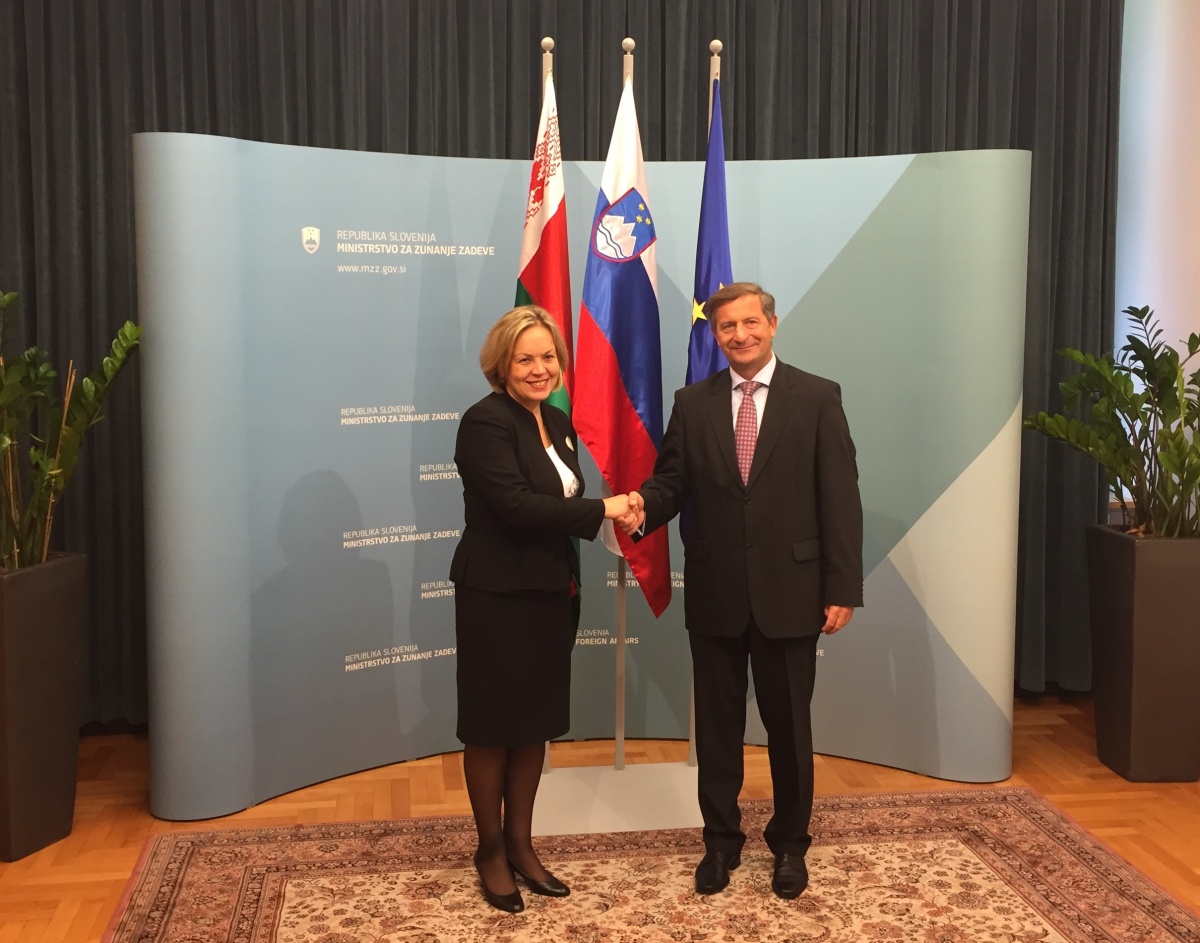 On 26 November in Tbilisi, she attended an informal meeting of foreign ministers from the Eastern Partnership’s participating countries. Back at home, during the last few weeks, Kupchyna met her counterparts from Hungary, Slovakia and Greece, as well as received the parliamentary delegations from Estonia and Latvia.

Latvia and Belarus also held a regular meeting of the bilateral commission on economic cooperation on 10–11 December in Daugavpils.

On the sidelines of the OSCE ministerial meeting in Belgrade on 3–4 December, foreign minister Vladimir Makei met his counterparts from Bosnia and Herzegovina, Estonia, Finland, Italy, Macedonia, and Montenegro.

Besides, the Belarusian MFA held a series of working-level bilateral consultations with diplomats from Germany, Macedonia, Lithuania and Latvia.

Between two Vladimir Makei’s trips to Europe, a European Commission delegation visited Minsk on 9–10 December. The delegation was led by Gunnar Wiegand, deputy director for Europe and Central Asia at the European External Action Service, and Katarina Mathernova, deputy head of the Directorate-General for Neighbourhood and Enlargement Negotiations. The team also included a representative of the Directorate-General for Trade.

Belarus and the EU agreed on a plan for implementing the European Dialogue for Modernization with Belarus in seven areas, namely, privatisation, trade and investment, environmental protection, power generation, transportation, social development, and human rights.

After his talks with deputy foreign minister Alena Kupchyna and other Belarusian officials, Gunnar Wiegand made public the EU’s intention to double its financial assistance to Belarus in 2016. Europe may also help Belarus with accessing the WTO and securing loans from international financial institutions.

The issue of easing the visa regime between Belarus and Europe caused an unexpected controversy. Mass media widely reported Gunnar Wiegand’s announcement that both the visa facilitation and readmission agreements were ready for signing. The only unresolved issue remained the implementation of higher security standards for Belarus’ diplomatic passports.

However, on the next day, Kupchyna said to a news agency that to the foreign ministry “this information was rather a surprise”. The deputy minister did not elaborate on any outstanding issues regarding the visa facilitation agreement.

As for the readmission agreement, Kupchyna mentioned the EU’s failure to provide Belarus with a “transition period” for its implementation. Minsk needs it to build the infrastructure necessary for accommodating the readmitted foreigners. It looks like Minsk is willing to continue bargaining for further concessions and possible financial assistance in this field.

Belarus has to show further progress in the fields of democratisation and human rights to secure the full removal of the sanctions in two months’ time.

Bits and pieces of information available from the recent meetings indicate that Minsk may agree on certain improvement of electoral regulations, a moratorium on the death penalty, and some easing of working conditions for political parties and NGOs.

However, one should hardly expect anything more than cosmetic changes at this point.

Igar Gubarevich
Igar Gubarevich is a senior analyst of the Ostrogorski Centre in Minsk. For a number of years he has been working in various diplomatic positions at the Belarusian Foreign Ministry.
all articles » Follow @
Belarusian-European relations Dialogue on Modernisation Eastern Partnership EU sanctions Europe European Commission Germany NATO Visa Facilitation