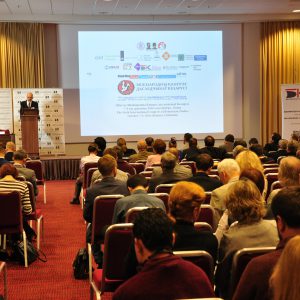 Belarusian Research Council (BRC) presents the results of the 2nd rating of think tanks. The first place went to Belarusian Economic Research and Outreach Center BEROC; the second – to Belarusian Institute for Strategic Studies (BISS) and the third – to the expert community Nashe Mnenie/ Our Opinion. The rating assesses the think tanks on three components: organisational capacity, information outreach and analytical and research activities.

Sixth International Congress of Belarusian Studies took place in Kaunas. The Congress was held on 7-9 October and gathered around 500 participants. This is the largest annual meeting of Belarusian and foreign experts, which are involved in studying Belarus. The event is organised since 2010 by independent think tanks, including Political Sphere Institute, EuroBelarus Consortium, BISS.

Cooperation of public and private sectors

KEF opens registration. Kastryčnicky Ekanamičny Forum/October Economic Forum, KEF is to be held for the fourth time on 3-4 November in Minsk and gather experts for a professional dialogue on Belarus’ sustainable development within the context of global economic development. KEF is organised by the Research Centre IPM in association with BEROC and CASE Belarus. The topic of this year is state-owned enterprises' restructuring. 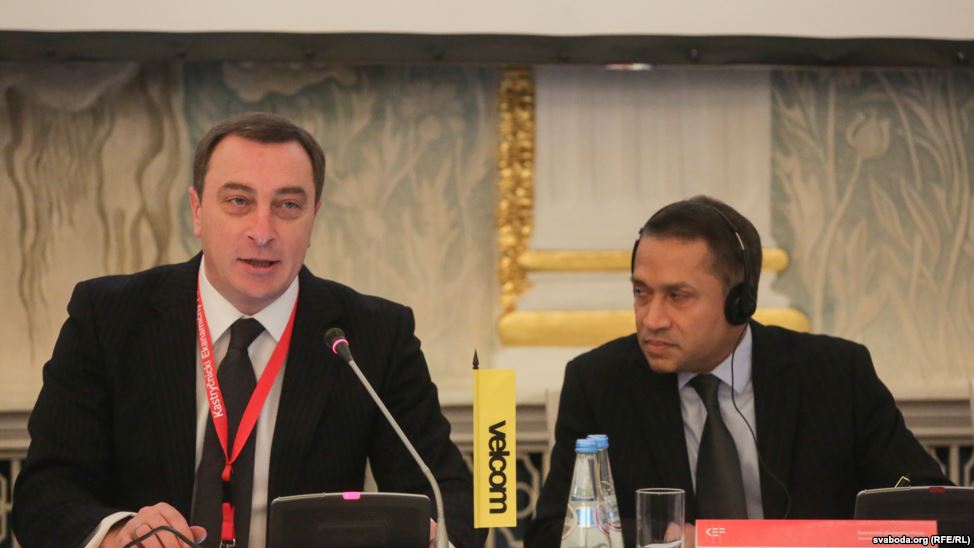 Half of the places in Public Advisory Councils go to the private sector. The government of Belarus has adopted a decree #802 stimulating public advisory councils at state bodies to the true work. The number of representatives of state bodies shall be not more than a half of the total number of a council. The opinion of state bodies will be considered on a par with the position of the business community, as well as other council members.

Eduard Paĺčys is a political prisoner. On 5 October, Belarusian human rights organisations issued a joint statement regarding the politically motivated prosecution of blogger Eduard Paĺčys, editor of the 1863x.com website, and called him a political prisoner. Paĺčys is accused of committing criminal crimes on incitement to racial, national or religious enmity and distribution of pornographic materials.

Belarus launches a tourism accessibility campaign. The initiative announced by the Office for the Rights of Persons with Disabilities, aims at promoting the right of persons with disabilities for equal participation in cultural life, recreation, leisure and sport. It is expected that up to 30 public facilities will be adapted to the needs of people with disabilities. The project is funded by the EU with the budget of 1.111 million euro.

9th call of humanitarian program Meeting Place: Dialogue. The program is implemented by the Understanding International NGO and funded by the German Federal Foundation Remembrance, Responsibility and Future. The program aims at social support of citizens who suffered from Nazi persecution during WWII, as well as other members of the war generation. The project budget can be 5K-20K euros per year. Deadline is 30 November.

Conference of the Belarusian National Platform (BNP) of the EaP Civil Society Forum is to be held on 22 October in Minsk. The conference aims at the adoption of regular reports, election of the Coordinating Committee, and discussion of the action plan for 2016. For the first time, the conference plans to discuss the contribution of organisations-participants to the activities of the BNP. 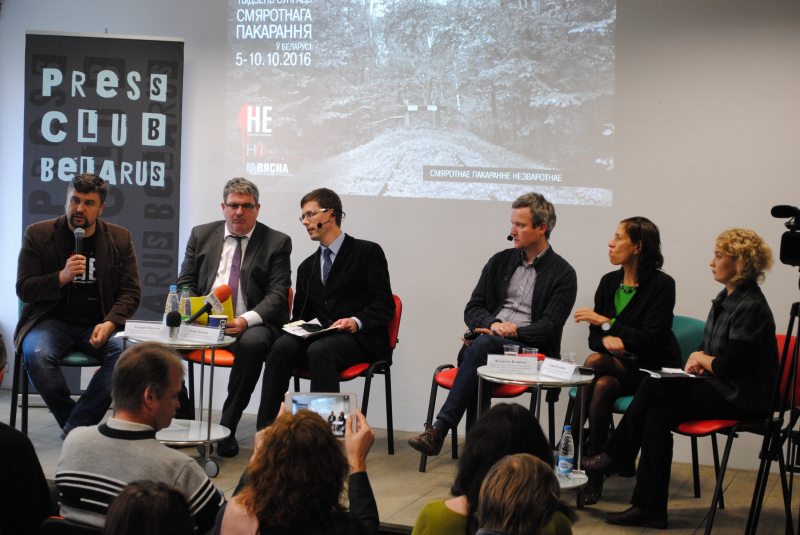 United Way launches a service to generate CSO registration documents. Ngo.by portal suggests a free service for Belarusian CSOs – a system of generation of official documents required for the creation of a CSO. By filling out a few lines with an actual data, users receive a complete registration package. The system generates documents using statutes and protocols of the registered CSOs.

53 newly-established NGOs were registered during the first six months of 2016. For the same period, authorities also registered 1 trade union, 2 unions of NGOs, and 5 local funds. As of 1 July 2016, as many as 2,695 NGOs and 41,327 NGO organisational structures were on the record. According to the Ministry of Justice of Belarus, majority of the NGOs are engaged in physical training and sports (722).

DzedLINE in Minsk. Belarusian public association of elderly and Gallery TUT.BY start a series of events called DzedLINE/Granddad LINE. The program aims to raise public awareness and talk in a clear language about what aging is, when it starts, and whether it is possible to slow down the aging. The first event will take place on 12 October. The aging topic is also raised in a photo fashion-project about active seniors.

Often, stereotypes stem from a historical legacy, perceived cultural, religious or ethnic differences, or a lack of ability to perceive “the Other” in a new light . Stereotypical views about specific countries are no exception to this rule.

Recently, during a youth exchange seminar in Brussels (Brussels Laboratory, a seminar on social inclusion and anti-discrimination strategies), students were asked to share some stereotypes about their countries.

A participant from Belarus shared what her colleagues had been posting on her Facebook page in the form of little stickers. Although positive stereotypes, such as “beautiful women” may be appealing to Belarusians, a discussion of negative stereotypes might be much more interesting and useful.

This stereotype remains widespread not only in relation to Belarusians, but about Slavic peoples in general. Films about James Bond or Hollywood action thrillers about the Russian Mafia perpetuate such images. 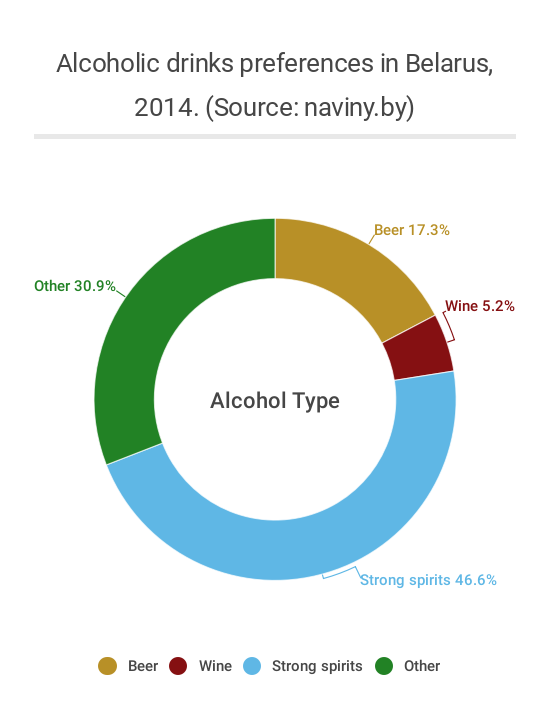 Although Alexander Lukashenka does not have such a reputation for bibulousness, it is nevertheless true that stereotypes surrounding alcohol consumption exist, especially in the eyes of Belarus’s western neighbours.

Nevertheless, in 2014 a report from the World Health Organisation came as an unpleasant surprise to the Belarusian public.

This data from 2016 shows that Belarus has become the second largest consumer of alcohol per capital after Estonia.

Given the low price of alcohol (compared to neighbouring countries) and its important role in every-day cultural and social life, it remains highly unlikely that the amount of alcohol consumed by the average Belarusian will decrease in the near future. 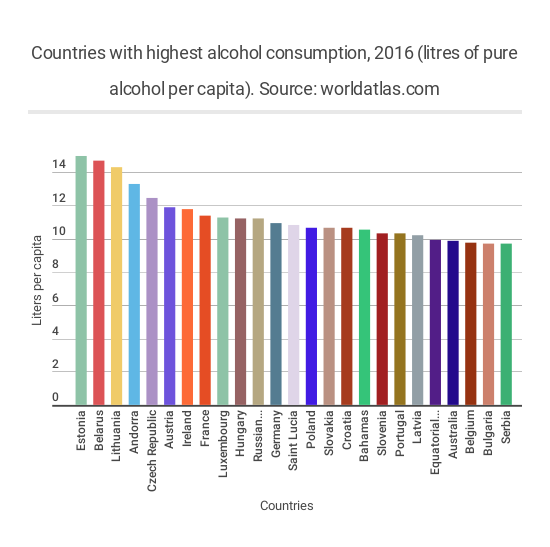 Due to the deterioration of the economic situation in Belarus in 2016 and the subsequent rise in unemployment, one can expect people to increasingly turn to alcohol in order to “drink away” their problems.

Stereotypes relating to the education and income level of Belarusians stem from a wide-spread negative perception of Eastern and Central European countries experiencing economic transition. But is the population of Belarus indeed as poor and uneducated as all that? 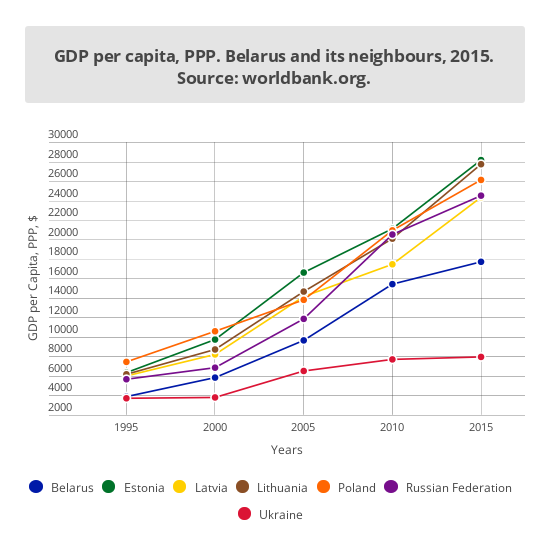 The CIA Factbook states that Belarus experienced GDP growth in both 2013 (1%) and 2014 (1.6%) despite the economic crisis of 2011. The year 2015 witnessed certain economic difficulties, with a negative growth of -3.9% of GDP. The "Still Doing Business" rating considers Belarus to have an upper middle income, ranking 44 out of 189 countries in ease of doing business.

Furthermore, Belarus has enjoyed stable GDP per capita growth since the 1990s. Nevertheless, the country has remained behind its neighbours, with the exception of Ukraine in 2015.

The Human Development Index, which measures important indicators such as gender development, life expectancy at birth, and expected years of schooling, places Belarus 50th out of 188 countries, with an index of 0.798. Currently, the expected amount of schooling in Belarus is 15.7 years, meaning that most Belarusians continue studying after high school. Primary and middle school education together takes 11 years (9 of which are compulsory).

According to World Bank data, Belarus has experienced a steady increase of people of both sexes enrolled in tertiary education; in 2014 it became the leader in this area among its neighbours. Moreover, Belarus has 58 universities and institutions providing higher education. This relatively high figure for a country with population of 9.5 million can be traced back to Soviet times, when specialists from all over the Soviet Union came to study in Belarus.

You can find a special collection of Belarus-related stereotypes on Belarus Digest.

​Veranika is a Research Fellow at EAST Centre and a PhD Candidate at the Graduate School for Social Research of the Polish Academy of Sciences.