In February 1917, a small boy is running with his mother on the streets of wintry St. Petersburg. The mother pulls him to a back street to one of the magnificent avenues of the city of the tsars. There are many people running around. They wave red flags, they sing and shout. The mother says, "Look, Boris!" The boy shifts from one foot to the other – "I want to go home, mama, I'm cold!Boris Kit was born on 6 April 1910 in St Petersburg (then Petrograd).

As a young kid he witnessed the Russian revolution. In 1933, he got his Master's degree from Vilnius (then Vilnia) University and began to teach mathematics at the Belarusian Gymnasium. In 1939 he became its director.

After Stalin incorporated Vilnia into Lithuania, Kit moved to Western Belarus where he worked on establishing Belarusian schools. He was briefly imprisoned by the Nazis and then had to flee Belarus at the end of the World War II. Boris Kit has made a distinguished career as a rocket scientist and a professor at the University of Maryland in the United States.

Michael Scanlan, Charge d’Affaires in Belarus, recently named Boris Kit and Tadeusz Kosciuszko as two Belarusians who have made profound contributions to the development of America.

Boris Kit moved back to Europe from the United States in 1970s. "I am happy here and I am a European in my heart" says Boris Kit in his Frankfurt home. In his interview with Radio Liberty Boris Kit explained that remaining intellectually active and helping people helped him live so long. Here is a short interview with Boris Kit in Belarusian. 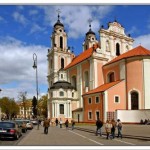 Very few people realise that as a result of the 1939 Stalin-Hitler agreement deviding Europe Lithuania got a seizable piece of land predominantly populated by Slavs – Belarusians and Poles.

Fortunately, the dispute between Lithuanian, Polish and Belarusian historians over Vilnius is peaceful. In early 1990-s Belarus and Lithuania had virtually identical courts of arms. Belarusian President even shared a story of his Lithuanian counterpart poining it to him that Belarus was using "their" symbols.

Lukashenka was happy to give up the more glorious version of the Belarusian history in exchange for oil and other benefits from Russia. Russian historiography had always supported the myth of ethnic Slavs being prosecuted in the Grand Duchy of Lithuania – one of the most influential states of mediaeval Europe.

But as a matter of fact, for centuries the only official language of that state was old Belarusian and Lithuanians constituted only around 5 percent of the Vilnius region population according to a 1931 census. Edward Lukas writes in the Economist:

All the arguments below are a) historically plausible and b) strike most outsiders as quite mad. … Not many people realise this, but most of the people speaking Polish and Belarussian in the area in and around Vilnius are not really Slavs but polonised Lithuanians, the legacy of centuries of forced assimilation. That is a terrible fate, so the right (and kindest) thing to do is to depolonise these people and relithuanianise them. A good way to start is to make sure that they do not get trapped into using foreign Polish letters and silly spellings when writing their names. It is Adomas Mickevicius, not Adam Mickiewicz. Let nobody forget it.

Read 'You say Lwów, I say Lviv' in the Economist.