Can Belarus Retaliate Against New US Sanctions? 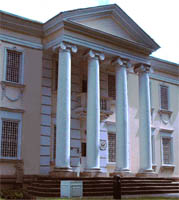 Today the U.S. Department of the Treasury sanctioned four Belarusian enterprises of Belneftekhim Concern, Belarus’ largest petrochemical conglomerate. Sanctions hit some of thee most profitable state-owned companies in Belarus – OAO Naftan, OAO Grodno Azot, JSC Grodno Khimvolokno and OAO Belshina. The U.S. government froze all assets of these companies within its reach and prohibited U.S. persons from engaging in commercial or financial transactions with them.

Ironically, today Belarusian President pardoned nine participants of December protests against falsification of presidential elections. Names of those pardoned have not been released yet and it is unclear whether some of the former presidential candidates will be released. According to Belarusian official press, they wrote personal requests to President Lukashenka asking to pardon them.

Although most of the sanctioned companies do little business in the United States, losses to the already struggling Belarusian economy may be significant. Belshina is one of Europe’s largest tire manufacturers. Naftan is a subsidiary of Belneftekhim Concern that produces petroleum products. Also a subsidiary of Belneftekhim Concern, Grodno Azot and Grodno Khimvolokno are Belarus' largest petrochemical plants manufacturing fertilizers, fibers and consumer goods. Belarus Government will have to privatize some of its most lucrative enterprises because of the ecoomic crises. Being on the U.S. sanctions list will certainly make these companies less attractive to investors.

Since 2007 the United States targeted several companies affiliated with Belneftekhim for being owned or controlled by Belarusian President Alexander Lukashenka. The U.S. sanctions against undermining democratic processes, human rights abuses and political oppression in the country. Today the State Department reiterated its call on the official Minsk to release immediately and unconditionally all political prisoners.

Proponents of sanctions argue that they are the only language which the official Minsk understands. Unlike Europe, the United States has almost no economic interests in Belarus and can afford wide-scale sanctions. Earlier this year Europe also introduced economic sanctions against but they stopped short of any serious measures. Europe depends on oil and gas transits though Belarus. More importantly, it is difficult for all EU member states to reach consensus on how to deal with Belarus. It appears that in the United States both Democrats and Republicans are committed to follow the same tough policy towards Belarus.

What can do Minsk in response to the new US sanctions? In 2007, following the introduction of the US sanctions, most of the US Embassy staff had been expelled from Belarus. This time, Belarusian authorities will look for ways to retaliate again but they may be too weak to escalate the conflict. The country is in the midst of the worst economic crises since the collapse of the Soviet Union and is eagerly looking for financial aid. Perhaps the only move which the official Minsk could do would be to expel the remaining U.S. diplomats from Minsk.

However, this will not inflict any serious damage to the U.S. interests in the region and will shut down opportunities for direct communication with the world's only remaining superpower.  Belarusian authorities still hope to obtain a loan from the International Monetary Fund, which the United States can easily block.

Official Minsk may also further strengthen repressions against political opponents to demonstrate that they are undeterred by the new sanctions. Under this scenario, Belarus may lose more than gain. This will make the prospect of normalization of relations with the West even more remote.  However, when balancing the prospects of losing power and normalizing relations with the West, Belarusian authorities may opt for political survival and more dependence upon Russia.

When Belarusian authorities intensify human rights violations and the West imposes sanctions in response Belarus' dependence upon Moscow increases even more. Moscow comes out as the only geopolitical winner for the time being.

Regardless of possible long-term efficiency of sanctions, the West should not overlook a more important task of supporting civil society in Belarus. Weakening the Belarusian regime is easier but not necessarily more effective than strengthening a real alternative to it. 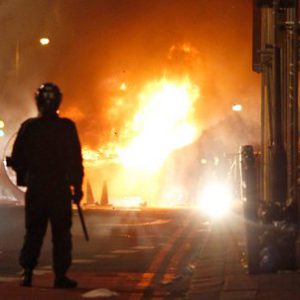 "It's just the beginning" reads the top headline of Belarus Today, the main official newspaper in Belarus.  The story covers not the economic crisis in Belarus but the ongoing riots in London. The newspaper hints that reduction in unemployment benefits and subsidies on youth and social centers were the main reasons for London riots.

Belarus Today stopped short of comparing the London riots to protests in Belarus organized through social networks this summer. But the article does draw a parallel with the Arab spring.  According to the official newspaper, "Londoners who were inspired by Twitter revolutions are now logging on Facebook with fear to see which district of the capital will be next". The comparison is straightforward but wrong.

Police in London tries to deal with provocations of hooligans while Belarusian police was reportedly involved in preparing provocations. The only serious disorderly episode in Belarus was in December 2010 when a group of young people smashed several windows in a government building.  Then although tens of thousands moved to the government compound and the authorities knew about it well in advance, the main government buildings were left unprotected.  Thousands of police officers were waiting in the nearby yards.

When several windows in a government building were smashed, it was used as pretext for beating and jailing hundreds of protesters. Many were subsequently released, but the most active, including three former presidential candidates, will spend years in Belarusian prisons.

Well-educated and politically active constituted the core of protesters in the Arab world and Belarus. In London, nearly all rioters come from poor backgrounds and have little interest in politics. Another difference is that the majority of Londoners clearly disapproves the rioters – thousands took to the streets to clean the streets and attempt to stop further riots. There were no demonstrations to support the election results in Belarus nor anybody other than security services tried to prevent the protests. In some Arab countries, the rulers were successful in taking their supporters to the streets but many of those actions were staged by the authorities.

In London, police is careful (sometimes too careful) to obey the laws and hesitate to deploy additional anti-riot equipment such as water cannons or rubber bullets. In Belarus, security services have a carte blanche and are certain that they will remain unpunished. They do not hesitate to use excessive force even against peaceful protestors for merely gathering in a public place.

Current regulations in Belarus make it nearly impossible to organize authorized protests in Belarus. The rules may become even harsher soon. According to draft legislative amendments recently introduced by the Council of Ministers, any mass presence of citizens in a public place, organized for the purpose of “action or inaction” to publicly express social or political views or protests would require official authorization.

International organizations such as the OSCE and Amnesty International have already expressed their concern about the proposed amendments. But their arguments are unlikely to persuade Belarusian authorities who are seriously worried about future unrest as the economic crises in the country deepens.

However, the Belarusian authorities need no new amendments to do what they want even now.  This summer plain clothed men arrested thousands in Belarus on suspicion in participation in the "social networks revolution".  Even the official General Prosecutor's office called to stop relying on plained clothed agents and vehicles without license plates to beat and detain people. The security services paid no attention to these calls.

In a country where legislation serves only the interests of the ruling group, the notion of the rule of law is very different from that in a democracy. The recent detention of a prominent human rights activist on tax evasion charges in Belarus is another recent example of that.

Using law as an instrument of repression is a traditional tactic of all authoritarian regimes and Belarus is no exception. Activities which are illegal in Belarus or other authoritarian states today may be glorified in history books tomorrow.  The London rioters will end up in history books much sooner. And certainly for very inglorious reasons.