Last week on Belarus state TV was a week of historical anniversaries. 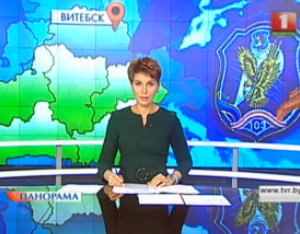 Last week on Belarus state TV was a week of historical anniversaries.

Commenting upon the situation in Ukraine, journalists often made reference to the situation using terms like “slavic unity”, “refugees from Ukraine”, but also readily noted Kiev’s reluctance to paying off arrears to Gazprom.

20 years ago, on 10 July Lukashenka became the President of Belarus. Casting their votes for Lukashenka, “Belarusians voted for sovereign politics and independence”, one state TV journalist narrates. According to the report, people voted then for "real independence” not the one just on paper.

The reporter covering the story also commented upon the political rivals back in 1994: Viačaslau Kiebič, the one “from nomenclature”, Zianon Pazniak, a “nationalist” from the Belarusian Popular Front, and finally, Alexander Lukashenka, a “deputy from the people, without a party affiliation’. “Today they call him a “pro-Belarusian candidate”, then he was just “ours”.

The mysterious victory of Lukashenka. The coverage states that Lukashenka’s victory remained an interesting phenomenon up until the present day. He explained further that the 1990s was a time of “romantics and euphoria”, a period that lasted only until the first serious economic difficulties arose.

These times lasted up until 1994 and had their own colourful charm, with the reporter reminiscing about “coupons for pasta and vodka, delays in paying salaries, a soap opera of endless disagreements in the Parliament”. Lukashenka offered solutions to these problems and won the support of Belarusians.

The coverage also commented upon the opposition from the 1990s and positively evaluated the shift towards a “monolyth in politics” as it gave Belarus a chance for its economy to develop.

Closing, the reporter concluded that today Belarus remains a place where bilinuguism and inter-confessional peace are a norm.

Symbolic opening of a war museum with Putin. Just a day before Belarus' Independence Day, both Alexander Lukashenka and Vladimir Putin opened the Museum of the Great Patriotic War in Minsk.

During the opening ceremony, the Belarusian leader spoke about the importance of the unity of the Soviet republics that fought together against the Nazis. According to Lukashenka, instead of the West showing their gratitude for their Soviet ally's sacrifices, “we see a dictate of sanctions”.

The Russian president, Vladimir Putin, praised the bright future of Belarus-Russia co-operation within the Eurasian Union.

Kupalle: uniting the Slavic people. Belarusians again gathered in the village Aleksandryja in the Shklov district (Lukashenka's home region) to celebrate the midsummer festival, Kupalle. Lukashenka also attended the event and in his speech explained what coming back there meant to him personally. He also argued that the situation in “brotherly Ukraine” should be resolved as soon as possible.

In their coverage, state TV narrates that festivals such as Kupalle in Aleksandryja and Slavianski Bazaar in Viciebsk had played an important role in history – they reunited the Slavic world. This is particularly important, according to the report, after the events in Ukraine.

According to an old legend, the main goal of the Kupalle festivities was to find a fern flower and, should one be successful, it would bring them happiness and prosperity. “We would like to believe that it will bring peace and prosperity to all Slavic nations", the reporter concludes.

Less help from the state for Belarusian enterprises' modernisation. At a special meeting, headed by the prime-minister Michail Miasnikovič, officials discussed new approaches for pushing for modernisation. The country is in need of a fairly comprehensive “complex modernisation, and the management must be responsible for their companies’ efficiency”.

“At present, every company should increase its efficiency on its own”, the reporter clarified. “It is time that the state alone stops financing modernisation, but should just focus on supporting the most highly prioritised enterprises”, he concluded.

During his visit, Lukashenka argued that Belarus would need to acquire more equipment for mobilisation "in case we would have to wage a war on our own". He also visited a local canteen which can feeds up to 240 soldiers. The reporter covering the event was keen to point out that all of its equipment was made in Belarus and all of the food came from local producers. The head of state ordered a meal in the military canteen.

The coverage described the ceremony for signing the Association Agreement as pompous and full of optimism. The EU leadership pointed out throughout the event how historical it was. This co-operation with Brussels will, however, cost Kiev $8bn, which the country will lose due to Russian taxation on goods exported from Ukraine. “Experts explain that Russia will have to protect its market from re-exported European goods", the journalist explains.

In the same report the journalist also discussed Kiev’s arrears in payments to Gazprom, the controversies surrounding the South Stream and the issue of refugees from Ukraine. She cited Vladimir Chizhov, the Russian Ambassador to the EU, who stated that “the project does not satisfy those in the West who want to take control of the gas transportation system in Ukraine”. “But thinking Europeans understand that the South Stream will serve in the interests of energy security of the EU”, reporter emphasises.

Refugees from Ukraine are invading the EU countries? In another report, state TV reports that according to the European agency in charge of refugees, ten times more Ukrainian immigrants have come to the EU after "the coup d’etat in Kyiv". Štefan Füle​, the European Commissioner for Enlargement and European Neighbourhood Policy, confirmed the arrival of a number of refugees from the east of Ukraine.

Paula Borowska
Paula Borowska is currently completing a PhD on religion and social capital at University College London. She holds a Master of Arts degree in Interdisciplinary Research and Studies on Eastern Europe from the University of Bologna.
all articles » Follow @borowska_by
Belarus Independence Day liberation of Belarus propaganda refugees from Ukraine state TV Channel 1 the Slavic unity Ukraine 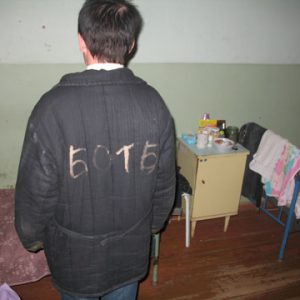 A Belarus TB hospital patient in 2011

Last week, Mario Raviglione, director of WHO's Global TB Programme, singled out Belarus and parts of Russia as being part of a developing "disaster situation" due to the high rates of multi-drug resistant tuberculosis.

He warned that migrants from these countries pose a threat to Western Europe, where multi-drug resistant tuberculosis​ ​(MDR-TB) is exceedingly rare.

The good news is that these fears are exaggerated. Research indicates that post-Soviet migrants account for a mere 1.7% of TB incidence across the EU border.

What is more, Belarus may pose less risk to Europe than countries like Moldova, where overall TB rates (although not MDR-TB rates) are more than twice as high. Unlike Belarusians, Moldovans no longer need to obtain Schengen visas for short-term visits.

Research to date suggests that imposing medical testing requirements for long-term visa applicants from post-Soviet states, a practice followed by many western countries, leads to nothing but stress and bills for the applicants.

Why MDR-TB is a Public Health Emergency

Belarus still has much to worry about. Between 1990 and 2000, TB incidents nearly tripled. Alarmingly, one third of the newly diagnosed and two thirds of returning TB patients have MDR-TB.

This is the highest MDR-TB rate ever documented in the world. MDR-TB infections continue to grow, despite significant efforts to curb them. 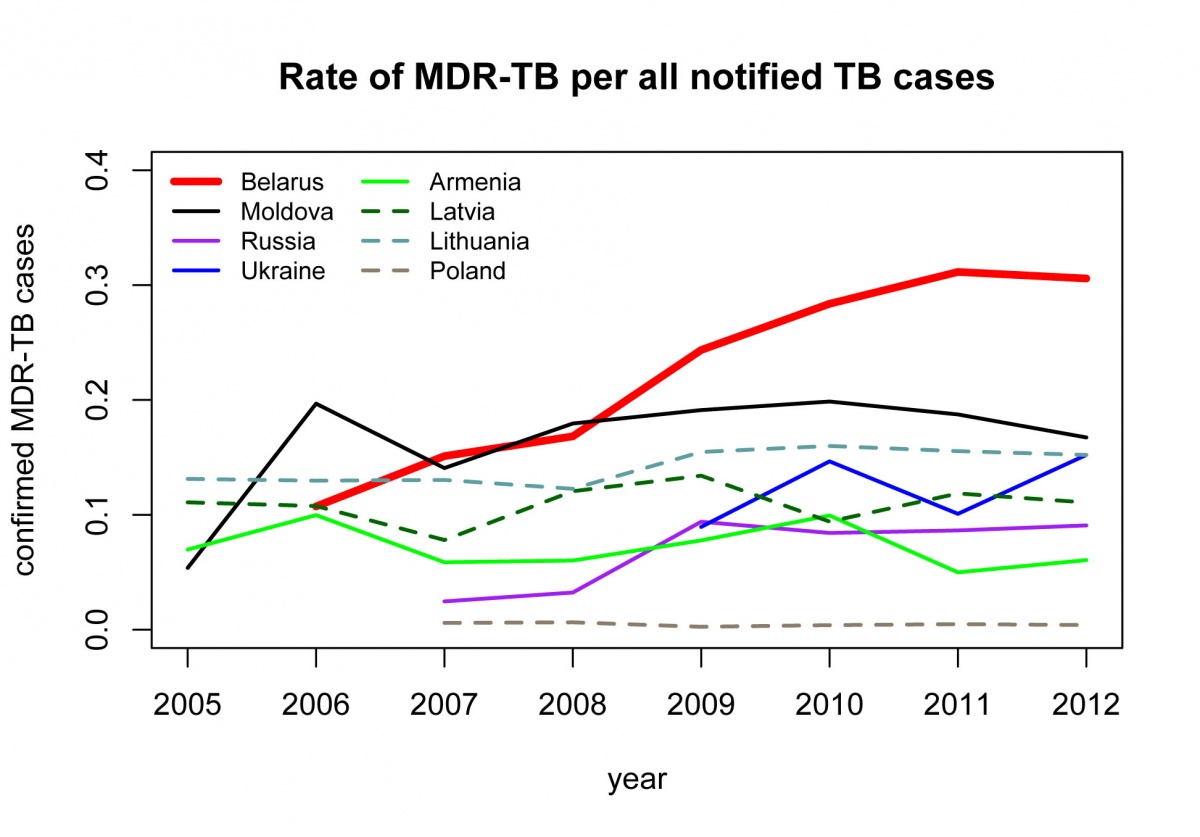 MDR-TB is a form of TB resistant to at the least two of the most powerful drugs currently available.

With ordinary TB, patients get better after a few weeks or months on mainstream antibiotics. With MDR-TB, patients require second-line drugs, which are much more expensive and less effective. Fewer than half of MDR-TB patients are ever cured.

High incidence of MDR-TB speaks to the poor management of TB patients. Drug resistance evolves when patients receive some treatment, but are not cured completely, for example, because they forget to take their medicine, leave treatment programmes early, or take the wrong drugs. MDR-TB strains can then easily spread to other people.

At first glance, Belarus’s health care system has performed reasonably well. The WHO ranks it 53rd out of 190 countries, which is the highest ranking in the CIS. The number of per capita hospital beds and per capita physicians in Belarus is much higher than in the West.

However, Belarus continues to use technologically backward practises, ones common to all countries of the former Soviet Union, which may have contributed to the alarming rates of MDR-TB incidences. 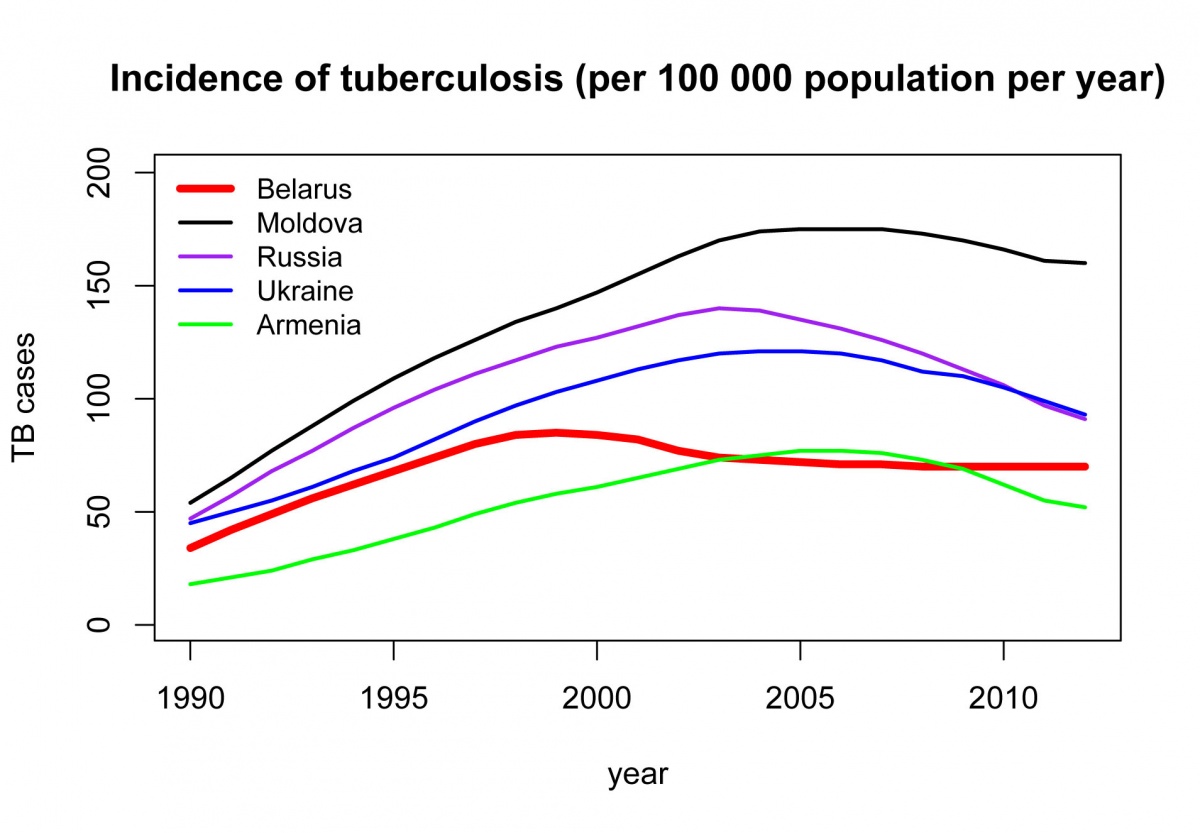 All of these countries used to conduct annual mass screening through tuberculin skin testing, which is considered an ineffective and costly diagnosis method. None of them maintained electronic databases of their TB patients.

More alarmingly, noninfectious TB patients were often unnecessarily treated in hospitals and involuntarily isolated. This not only burdened the health care system financially, but also imposed a psychological and physical burden on the patients.

Perhaps the best known case was a 2011 hunger strike by the activist of the Belarusian Christian-Democratic Party, Valery Gancharenka, who was treated at the Bogushev TB hospital. The strike prompted an investigation by the human rights organisation Viasna.

Viasna found that the hospital had seen no renovations since the 1960s. The walls were reportedly covered in mould; the facility had no running hot water throughout the year. Similar conditions were reported in two other provincial TB hospitals in 2008 and in 2010.

With some guidance from international organisations, Belarus’ TB programme has reached several important milestones. Among other things, Belarus revised its TB and MDR-TB treatment and control guidelines and reorganised its national laboratory network. It also integrated TB care into primary health care and increased the level of supervision for facilities delivering TB services.

As part of its Soviet era inheritance, the current Belarusian health care system is centralised. The ultimate management power lies within the central government. Even so, TB planning has been conducted at the rayon (district) level and taxes are collected locally. This produces imbalances in the quality of care and issues with funding, which regularly dries up. Greater centralisation could allow for the pooling of resources and distributing them more effectively.

TB and the Politics of Exclusion

TB bacteria can lie dormant for months and even years, causing no illness in most of the infected. If the infected move to another country, there is some risk that the latent disease will develop into active TB in the first few years after immigration. 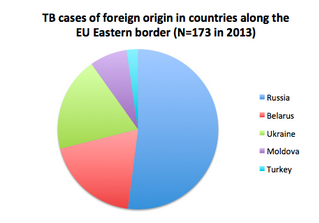 However, a 2013 study by the researchers at the European Centre for Disease Prevention and Control focused on the 10 EU countries at the EU’s Eastern border has shown that in 2010 a mere 0.5% of all TB cases indeed originated in the countries bordering the EU to the East.

The distribution of these cases by the country of origin suggests that Belarus accounted for 0.1% of all notified TB cases (or 33 out of 47, 433 cases). Belarusian migrants present a far lesser risk to the EU than often previously assumed.

While TB is indeed more prevalent among migrants, albeit primarily those who come from Africa and South Asia, another study, focused on the UK, has shown that less than a quarter of TB cases are diagnosed within two years of an immigrants’ arrival. Thus, poor living conditions in the host country, rather than prevalence of TB in the country of origin, may be driving up the numbers of migrants with TB.

Indeed of combating the spread of TB, the alarmist warnings about Eastern Europeans may contribute to their already negative perception in Western Europe. Portraying migrants from post-Soviet states as diseased will further strengthen prejudice against this group.