Chinese FDI in Belarus: Investing in a Backwater? 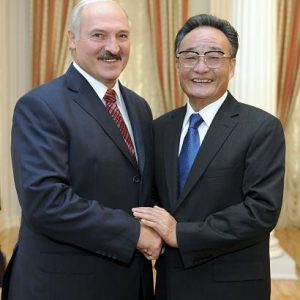 Beijing will issue a $1 bn soft loan to help Belarus out of its current account crisis. Minsk will reciprocate by granting China equity stakes and joint ventures in strategic sectors, such as machinery and power generation. This follows $15 bn in loans issued by Chinese banks to Belarus over the past two years.

These developments are emblematic of China’s global expansion. With foreign exchange reserves at half of GDP, China is looking to reinvest surplus capital overseas. Since 2009, it has poured more money into developing economies than the World Bank. In the process, Beijing is expanding diplomatic influence, securing resources and markets, and promoting the globalization of state-owned firms. Like other low-income countries, Belarus is eager to obtain Chinese capital and technology on preferential terms. But Belarus is unique in several respects.

China is entering just as the Belarusian economy faces severe challenges. China sympathizes with a post-socialist country ruled by a strong state. If China, as opposed to Russia or the EU, becomes Belarus’s major investor, this could have major implications for the country’s future. Belarus may also become a geostrategic node for China in Eastern Europe. This could trump the EU’s efforts to isolate Belarus, as well as challenge Russia’s attempts to control its smaller neighbor.

Historically, Belarus has not been a popular place to invest. In 2000-10, the average share of FDI to GDP was below the level for post-Soviet states, even though Belarus’s economy is very small. In the industrial sector, firms with foreign investment account for less than a tenth of total output and employment. China thus appears to be venturing into an investment backwater.

But conditions for foreign investors in Belarus are a lot better today than ten years ago. FDI inflows increased markedly in 2007, from less than one percent to four percent of GDP. Unlike exports, which plummeted after the crisis in 2009, FDI inflows have remained high.

FDI growth is likely to continue with or without the Chinese. Belarus is an extremely open economy, with trade volume at 101 percent of GDP in 2010. Theory and empirics dictate that foreign investment follows trade. More importantly, the government, in spite of excessive interference in the economy, has  implemented measures to attract investment. In an April 2008 speech to the National Assembly, President Lukashenka announced the target of making Belarus one of the 30 countries with the best business climate. This is echoed in a report by the cabinet’s Foreign Investment Consultative Council, which also aims to increase FDI to one fifth of GDP in the next decade.

Even if Belarus does not meet these targets, its investor environment has certainly improved. Last year, it ranked 68th among 183 countries on the World Bank’s “Ease of Doing Business” survey, ahead of China and Russia. On several indicators, such as the time it takes to start a business and the cost of registering property and enforcing contracts, Belarus does better than average for post-Soviet states. It has also been one of the region’s most prolific signatories of bilateral investment treaties (BITs); the bulk of these have been with countries outside the region.

Nonetheless, investor-friendly policies are not useful without economic stability. Judging by Belarus's recent performance, Chinese investors will face considerable risks. The Belarusian ruble, on a crawling peg with a basket of currencies, has not withstood severe inflationary pressures. The first major devaluation came in January 2009, followed by several more this year. Due to excessive borrowing and plummeting exports, Minsk can no longer service its current account deficit. One could argue that the upside of a poor country fraught with debt, inflation, and currency risk is its growth potential – GDP did expand at eight percent per year in 2000-08. But in light of the current crisis, the IMF forecasts just four percent annual growth for 2011-16. In the meantime, the structural reforms necessary to improve the economy – such as more flexible labor markets, a smaller public sector, and less welfare spending – will take time.

The Chinese don’t seem too concerned though. During his visit, Wu Bangguo sought to shore up investor confidence by blaming Belarus’s misfortunes on Western sanctions and the global economy. His statement was politically motivated. Even when the global economy recovers, Belarus’s exports are unlikely to return to previous levels, because they are losing their principal advantage: subsidized oil and gas inputs from Russia.

Economic recovery may be less relevant for Chinese companies in Belarus. Because most are owned by the state, they face less pressure to make quick profits and can turn to state-owned banks for refinancing. As latecomers, the Chinese often leverage risk propensity to explore opportunities in markets that Western investors avoid. The question is: what opportunities does Belarus, a small country without natural resources, really offer?

From China’s perspective, there are plenty. Currently, the bulk of FDI is flowing into trade and services rather than manufacturing and infrastructure. As a result, FDI has countributed little to fixed capital formation. So Belarus is lacking FDI precisely in those areas where Chinese companies are strongest.

Much has been made of China’s bid to acquire state assets. But the Chinese are equally keen on forging new industries. During Wu Bangguo’s visit, Prime Minister Myasnikovich expressed interest in establishing an industrial park for Chinese firms, referring to the success of Singapore’s industrial parks in China. He might have mentioned that the Chinese now have ample experience with independent economic zones in developing countries, such as Pakistan and Zambia. Implicit in Myasnikovich’s comment was also disappointment in Belarus’s own Free Economic Zones (FEZs) – established in the 1990s, they have failed to attract notable investments.

In sum, Chinese firms see opportunities and downgrade risks. Chinese investment is likely to increase in the medium term, through good times and bad. Whether and how Chinese investors will benefit Belarus, however, is another matter.

(This is the first article of a three-part series)

In an effort to avoid persecution for political activism, opponents of the Belarusian regime continue to look for new forms of protest. Sometimes such forms do not prove to be effective or even reasonable. On Tuesday, the online community “Revolution Through Social Networks” proposed to turn “Silent Actions” into “photograph actions'”. The aim is for people in cities across the country to take photographs with a message to President Lukashenka.

Organizers of another protest action, “Peoples’ Rally”, propose to hold meetings in the courtyards of residential buildings in order to elect representatives for a national rally in Minsk scheduled for November 12. This is effectively a second attempt at mobilization – the People’s Rally failed to generate sufficient turnout to stage large-scale rallies in early October.

Social activist projects like these only make it easier for state security agencies to identify and punish protestors. Observers of Belarusian civil society tend to exaggerate the role of social networks and other new forms of protest, given the ambiguity exisiting around effectiveness of these methods in bringing down brutal regimes in the Middle East. They underestimate the fact that tough activism, not the Internet, is the most effective instrument against tyranny.

The nature of social networks protests

Social networks can strengthen mass mobilization and propaganda opportunities for existing political parties and organizations, granted they are smart enough to adjust to changing conditions. Yet such networks cannot work autonomously, nor do they enable people to self-organize for protracted and potentially risky struggles against the regime.

Given the ongoing crises of inflation and impoverishment in Belarus, Belarusians have legitimate grievances. They have vented their anger through the “Silent Actions” this summer and through the “People’s Rally” in early October. But neither of these protest movements achieved much success.

The 'Silent' Actions gained momentum until mid-summer but quickly died down following harsh government crackdowns. The problem with these protests is that they were bereft of ideology and even political symbols. They were remarkably effective in attracting many people in small towns across the country, many of whom had never participated in political activism before. Yet the opposition parties publicly maintained a distance and refused to politicize the protestors’ grievances about the country’s economic troubles. As a result, they failed to provide “silent” protestors – mostly people without political experience or ideological sophistication – with an alternative political platform and organizational support to resist persecutions. On 26 October Lukashenka publicly boasted that, "Belarus learned to fight 'revolutions through social networks."

The People’s Rally was an even greater failure. It took four months to prepare and garnered the support of all political groups opposed to the regime. The movement was fueled by the worsening economic crisis – in particular the renewed devaluation of the ruble in late September – that led public discontent to reach unprecedented levels. Public opinion surveys are evidence of the lack of support for the current regime. Even so, the final turnout for the People's Rally was pitifully low – even according to optimistic estimates by the event’s organizers, no more than 2,000 people participated in rallies across the country. In Minsk, a city of 2 million inhabitants, only 600 turned out.

The “virtual fight” of political activism on the Internet may be effective against regimes that exercise only loose control over their citizens. In such cases, it can organize people to protest and peacefully demand changes. Yet against stronger regimes, there is clearly no other way but to take to the streets and hold organized actions in order to effectively disrupt social order under the dictatorship. This requires political organizations with efficient structures and political platforms, as well as a large membership base.

Not every political force is up to this challenge. When regimes control their citizens as extensively as in Belarus, moderate liberals tend not to remain in the country. No liberals survived the prolonged dictatorships in Iraq, Libya, or even Egypt. Scanning the spectrum of political parties in Belarus today, the National Democrats from the Belarusian Popular Front (BNF) looks most capable of resisting Lukashenka. But it has been weakened by years of fruitless opposition. The Christian Democrats, another potential political force, have been neutralized from the very beginning by being denied the right to register as a political party by the government. Nevertheless, these parties would be most able to bear the hardships necessary to mount a revolution.

Under these circumstances, the most likely scenario is that regime insiders will seize on the political tensions to overthrow Lukashenka and act as if they had instituted democracy. For such opportunists, nothing could be more useful than a mass movement that lacks a political program and responsible leadership. Social networks are the most blatant example of this – it is pretty obvious by now that online movements cannot succeed on their own, especially when considering the attempts of “Revolution in Social Networks” activists to organize opposition without any explicitly political messages. If the political opposition does not guide these movements, the wrong people might be eager to do it for them. That will make transition for post-Lukashenka Belarus more long and painful.

Belarusian society needs new political programs, not just new methods of protest. In his analysis of the causes of failed protest, Valery Karbalevich, a veteran analyst of Belarusian politics, recently commented: “[Belarusian] society does not see any alternatives…neither in an attractive new social project more attractive than Lukashenka's, nor in credible organizations that call for protests, nor in a respectable leader.” Such an alternative can be promoted through social networks yet it definitely will not emerge in chaotic web-activity.

The alternative would be a movement that is seriously willing to challenge the regime. Fortunately, Belarusians gained experience through their struggle against Soviet and post-Soviet governments in the early 1990s. At the time, National Democrats were able to organize very quickly once clear political programs were issued and determined leaders and party activists emerged.