Editorial: responding to violence in Belarus

Following the violent suppression of peaceful political protests in Belarus, many policy-makers Western capitals are at a loss. Should they re-impose sanctions? Ignore human rights violations for geopolitical concerns?

To resolve this quagmire, it is important to understand why the... 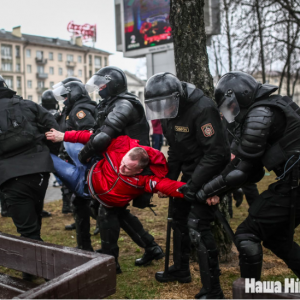 Following the violent suppression of peaceful political protests in Belarus, many policy-makers Western capitals are at a loss. Should they re-impose sanctions? Ignore human rights violations for geopolitical concerns?

To resolve this quagmire, it is important to understand why the Belarusian authorities have resorted to violence.

Why are Belarusian authorities overreacting?

Although no one doubts Alexander Lukashenka's willingness to resort to violence against peaceful protestors, expert opinion differs over why exactly he chose violence this March. Over the past several years, the authorities have refrained from resorting to large-scale violence. Unsanctioned opposition protests were monitored, but large-scale violence was not used until this month.

One thing seems clear – the authorities want to deter future protests. Their logic is that a harsh reaction to a small protest will make people think twice before protesting again. Although the total number of people participating in 'social parasite protests' throughout Belarus was lower than many opposition demonstrations of the past, their spread to the regions and the participation of a previously apolitical segment of the population has scared the authorities.

The reaction of the authorities has so far been less harsh than in post-election crackdown in December 2010. But with hundreds of people detained, the brutal beatings of opposition activists it approaches the worst periods of the Lukashenka rule.

Importantly, the peak of the crackdown occurred during the Freedom Day celebration organised by the opposition, rather than the more spontaneous 'social parasites protests' earlier this month. In this way, the authorities demonstrated their intolerance of the organised opposition while proving their loyalty to Russia and its anti-Western, anti-Maidan course.

Some blame the brutality on the efforts of pro-Russian elements in certain law enforcement bodies, who are interested in spoiling the gradually improving relations between the West and Belarus. According to this logic, the worse the human rights situation in Belarus, the more power police have and the closer the country gets to Russia. Some pundits even suggested that Belarusian riot police officers dream of Russian salaries, which are much higher.

Other voices argue that it is Lukashenka’s son Viktar who is trying to prove himself as a tough leader.

However, as in 2010, the lack of any conclusive evidence means that all such theories are highly speculative.

The main strategic goal of the Belarusian leadership is to remain in power. In the absence of real elections, they face two existential threats.

First, the threat of domestic revolt, which looks very real given the revolutions in Ukraine and the ousting of President Viktar Yanukovich. The rapidly declining economy, growing unemployment, and political intolerance in Belarus contribute to this scenario.

The second threat is open or covert interference from Russia. Russia has enormous influence among the Belarusian law enforcement agencies (siloviki), in the country’s economy, and in its media sphere. To appease Russia, Belarusian authorities like to emphasise that Belarus is its only real ally to the West of its borders. But economic pressure from Russia, pressure to host a military air base, and Russian interference in countries stretching from Ukraine, Moldova, Montenegro to the United States cannot be entirely dismissed by the authorities.

In the minds of the Belarusian leadership, seriously improving relations with the West would lead to political liberalisation and a higher likelihood of a domestic revolt scenario. Moreover, Russia is jealously watching any pro-Western overture from Lukashenka, thus strengthening the second scenario. For example, Russia promptly reacted to measures such as the introduction of visa-free access of Western nationals to Belarus by imposing border controls with Belarus.

Political survival, rather than the well-being of the population, drives the actions of the Belarusian authorities. Any improvement in relations with the West may bring some short-term benefits, but in the long-run, this would simply worsen the two main existential threats. Moreover, playing the anti-western game and suppressing demonstrations plays well in Russia, which is the main geopolitical sponsor of the Belarusian political regime.

How should the West respond?

Given these two existential threats, any optimism about serious improvements in Belarusian-Western relations is misplaced. Without unrealistic expectations, the European Union should clearly delineate those areas of cooperation contingent upon improvement of the human rights situation, and those which should be pursued in any event.

The European Union will be under pressure to react to the recent human rights violations by remaining faithful to its values. However, because EU presence and leverage in Belarus are very weak, the menu of responses is largely limited to reintroducing of restrictive measures and reducing high-level official contacts with Lukashenka and the handpicked parliament.

On the other hand, visa liberalisation, support for Belarusian civil society, education, media, and entrepreneurs should at least continue to receive support or strengthened. Progress in these areas primarily benefits the Belarusian population, which is already in a very difficult situation: deprived of many human rights and struggling to make ends meet. At the same time, other projects with the Belarusian authorities could be revised or put on hold.

In the short-term, it will be important to see whether the authorities will release all those detained in March, including those arrested on bogus charges of plotting an armed 'putsch'.

If the days of long-term political prisoners return to Belarus, the country will most likely see yet another sanctions-engagement cycle with the West. 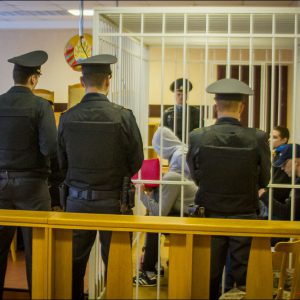 On 10 March, a court sentenced six football hooligans to lengthy jail sentences for a fight between fans of FC Partyzan Minsk and a rival group of ultras which occurred in June 2014. The football fans received particularly severe sentences of twelve, ten, six and four years in jail.

In sentencing the leftist hooligans to imprisonment, officials intend to keep anarchists and football ultras off the streets during the countrywide social protests which started in Minsk on 17 February.

Despite the fact that human rights organisations have not recognised the ultras as political prisoners, the sentence can be seen as political motivated. Fans of the currently defunct football club were well-known for their antifascist views and had links to the anarchist movement.

In June 2014, a dozen hooligans of the former FC Partyzan Minsk attacked a group of Tarpeda Minsk fans heading to a match on public transportation. During the very short altercation, which did not last much longer than a minute, they smashed the trolleybus's windows, sprayed tear gas, and tore the jacket of one of the Tarpeda fans.

No bystanders were injured. Tarpeda supporters did not appeal to the police and continued on their way to the match. Minsk City Transport estimated that the damage came to only $15, which the youngsters paid shortly after the scuffle. Nevertheless, for this incident the football hooligans received long prison terms almost three years later.

Independent journalists called the prosecution of the football fans an 'antifascists case', pointing out the left-leaning ideology of FC Partyzan ultras and their links to the anarchist movement. Most commentators agree that the real cause of such a severe sentence was the political ideology of Partyzan fans.

Ten days after the incident, the police detained around five suspects, some of whom spent several days under arrest. They were released shortly after. In 2015, the Department for Combating Organised Crime, notorious for its fight against extremism in football subculture, decided to reopen the case. This time, the lawsuit included charges for unregistered organisations and drugs. 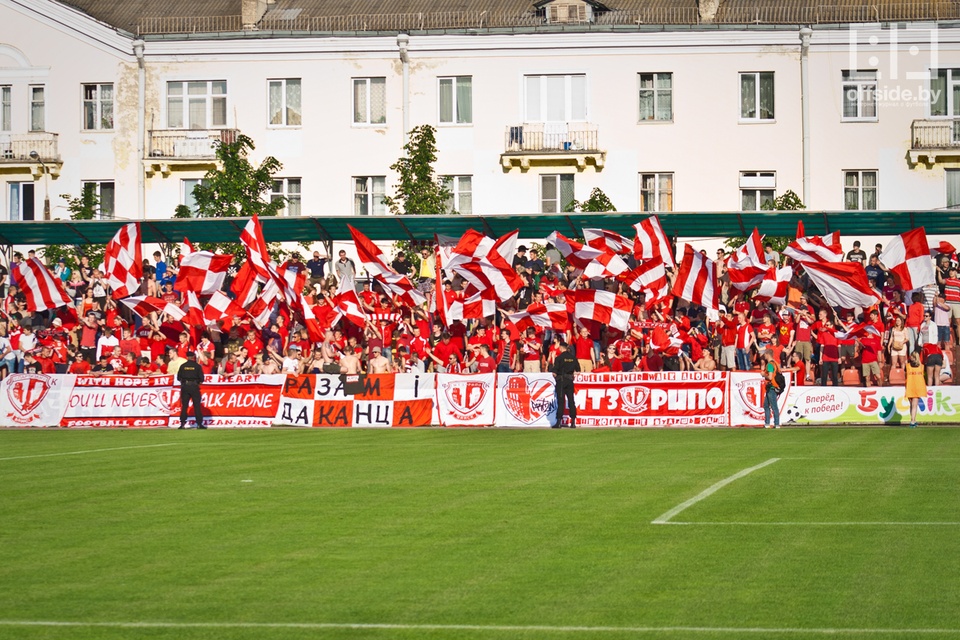 In February 2016, police detained two participants of the brawl, Artiom Krauchanka and Andrei Chartovich, for drug trafficking. The main witness for the case, Aliaksandr Klachko testified from prison while serving time for drugs. He stated that the youngsters had purchased 12 grams of hashish and shared it amongst themselves.

The accused fans did not profit from the deal and bought the substance (legal in some countries) for personal use. Nevertheless, this offence, in conjunction with the fight in the trolleybus, lead to twelve years in prison for both of them.

Another key figure of the case, Iliya Valavik, received a ten year sentence. According to investigation he had moderated football hooligans groups on social networks. This activity led the prosecutor to accuse him of leadership of a non-registered organisation, a criminal offence in Belarus. Three more defendants were found guilty only of hooliganism and received jail terms of four to six years.

Most of the accused stated during the trial that investigators had exerted pressure and intimidated them. For example, Iliya Valavik stated that during the interrogation, investigators had threatened to open a criminal case against his pregnant wife. During the trial, the defendants rescinded their testimonies, claiming they had been under pressure from police. Moreover, all victims of the trolleybus fight which the police were able to locate stated during the trial that they do not see themselves as victims and have no claims against the defendants.

Both independent and state media covered the trial. Belarusian Television aired several reports on the case. According to state journalists, ten passengers had asked for medical help after the incident. This simply isn't true. 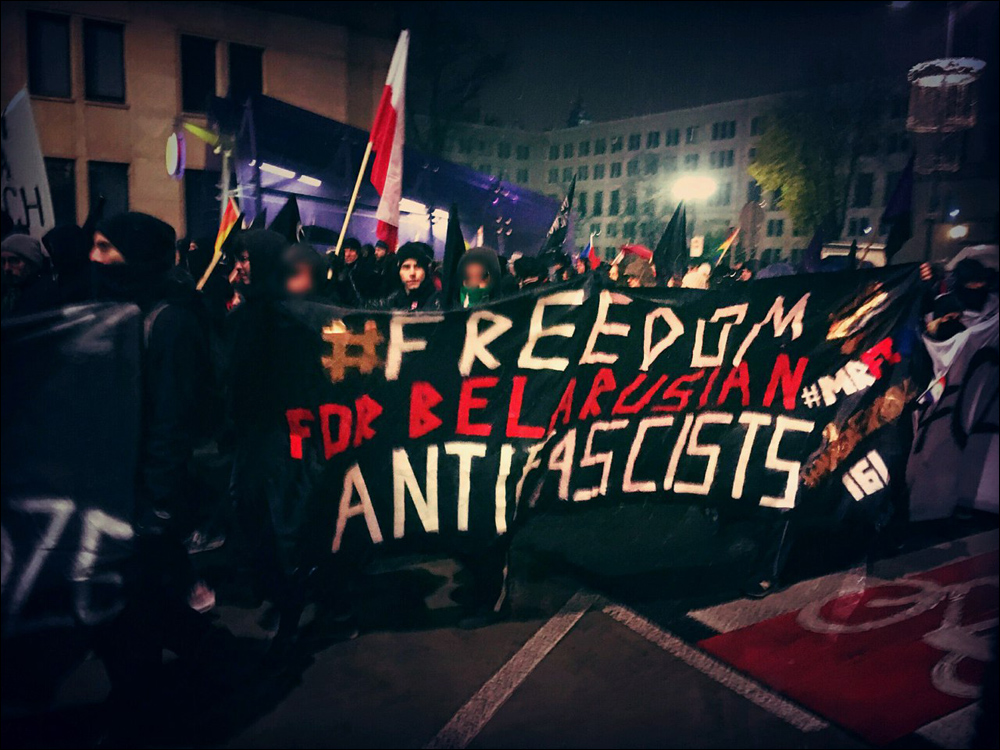 In one report, a police official claimed that the defendants had rescinded their initial testimonies because they 'hired an expensive solicitor' who told them to do so. Thus, according to the police, the fact that defendants made use of their right to take back testimonies in court is proof of the cunning hypocrisy of the prisoners, not evidence of the intimidation and torture they experienced in jail.

The independent media criticised the court sentence, but this did not lead to public support for the accused football hooligans. The presence of drugs and violence scared off human rights organisations, which refused to recognise the youngsters as political prisoners. The only group which supported the antifascist hooligans were anarchists. They organised several small street protests and posted transcripts of court hearings on the internet.

Obviously, the football fans' offence does not correspond with the penalty. The highest prison sentence for Russian football hooligans who organised disorder in Marseilles, an incident which involved death, was just two years. In nearby Poland and many other countries, football violence generally leads to a ban on attending matches.

Usually, Belarusian police treat fights between football hooligans as administrative offences. The most severe punishment for such misconduct is normally fifteen days in prison. For this reason, the 'antifacist case' can be regarded as part of a coercion campaign against radical left activists. This includes the criminal prosecution for participation in the Critical Mass cycling protest and graffiti case in 2016.

It seems that under different circumstances, the football hooligans' punishment would not be so severe. Unfortunately for Partyzan fans, the trial coincided with the 'social parasites' protests which started in Belarus in February. Anarchists took an active part in most manifestations and even led the protest in Brest. Therefore, the court sentence can be seen as a warning to anarchist activists and well-organised groups of ultras to keep them off the streets during protests.