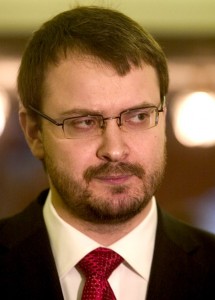 Opposition leaders were unable to adopt a procedure for selecting a single presidential contender at their meeting in Minsk at the beginning of July, BelaPAN reported*. According to Uladzimir...

Opposition leaders were unable to adopt a procedure for selecting a single presidential contender at their meeting in Minsk at the beginning of July, BelaPAN reported*. According to Uladzimir Kolas, chairman of the Rada (Council) of the Belarusian Intelligentsia (RBI), the process of selecting a single presidential contender had taken too long and might soon be of no use, as there would not be enough time for preparations to ensure an efficient and successful campaign. If the selection of a single candidate continues to be delayed, the RBI may withdraw from this process, Mr. Kolas noted.

Two presidential candidates Alyaksandr Milinkevich and Ales Mikhalevich have refused to be involved in the process.

Ales Mikhalevich was the first opposition candidate to launch his presidential campaign bid at a presentation on January 27, 2010 in Minsk*. The politician said he would rely only on Belarusian resources in his campaign. According to Mikhalevich, his team will comprise representatives of a new generation of the Belarusian society. He regards urban youth as his main support base. Mikhalevich is also the youngest candidate. He just turned 35 this May.

Ales Mikhalevich was born in Minsk in 1975 to a family of research associates of the National Academy of Sciences of Belarus. He attended the Belarusian State University, graduating in 1997 with a degree in Political Science and Law. While at university, Ales headed the Belarusian Students’ Association, a non-governmental organization dedicated to protecting the rights of Belarusian students. He also undertook periods of study at the University of Warsaw, Poland and University of Oxford, UK.

After graduation Mikhalevich worked in tourist business as well as a crisis manager accredited at the Ministry of Economy, a legal consultant at the Association of Disabled Veterans of the War in Afghanistan, and a lawyer at the Belarusian Independent Trade Union.

In 2004-2008, Mikhalevich served as a deputy chairman of the Belarusian Popular Front (BPF). Following his nomination to the position of the party chairman in 2008 and proposed program of party reforms, he was expelled from the party for publicly criticizing BPF leaders.

In 2003-2007, Mikhalevich was a member of the Pukhavichy district council, Minsk region and coordinator of the Assembly of Members of the Local Councils.

Ales is married and has two daughters.

On May 27, Ales Mikhalevich presented his electoral program*. Its name is “Belarus: a strategy for evolution” and it consists of three pillars: economic growth, effective state, and active society. “For me and my team the most important thing is make people vote for us,” said the politician.

The aspirant to participate in the presidential elections is in favor to support the private business, local government, constitutional reform, return to the separation of powers, and privatization of state-run mass media.

Another point of the politician’s election program is a territorial-administrative reform, which stipulates the abolition of regions and the republic’s division at 17 povets (districts) with centers in Brest, Pinsk, Mozyr, Gomel, Grodno, Baranovichy, Slutsk, Bobrujsk, Molodechno, Borisov, Mogilev, Krichev , Glubokoe, Polotsk, Vitebsk, Orsha. Moreover, in his opinion, it’s necessary to create a separate administrative and territorial unit of Minsk and Minsk region.

“Belarus needs an active self-management, which provides the decentralization of political, economic and financial power in favor of regions and local authorities,” stressed Ales Mikhalevich.
Opposition politicians stated that after the election’s victory he was going to expand the use of Belarusian language in the country, however, the presentation of his electoral program was made in Russian.

“My campaign will be mostly carried out in Russian. Russian is the language used by most part of our country citizens,” said the politician.

In addition, among his priorities Ales Mikhalevich named the private ownership of land, moratorium on the death penalty, neutrality of Belarus on the international scene, withdrawal from the Union State with Russia, cancellation of nuclear power plant construction, ban on the production of fruit wines.

Being an advocate of Belarus’ neutrality, Mikhalevich does not have plans to bring the country closer to NATO. As for the European Union, the country’s admission might become a priority. But it is not included into the current program*. 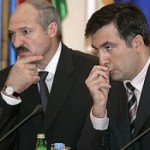 After June’s gas dispute and Russian enforcing Belarus to join the Customs Union, political tension between Minsk and Moscow persists, taking ever new turns and twists. Belarusian leadership retaliated for the film about Lukashenka shown on Gazprom-controlled NTV by meetings with conspicuous nemesis of Russia – president Mikheil Saakashvili of Georgia.

Furthemore, Saakashvili was invited to explain evil nature of Kremlin on Belarusian state TV. Reaction of Russian side was immediate – the same Moscow’s channel showed second film about Lukashenka. At least the first film really reached general audience – something that Polish-based TV channel Belsat did not manage to do since three years despite all efforts and hopes of Lukashenka’s opponents. Ordinary people discussed the NTV film, though quite few watched it by themselves.

It was a hard blow for Belarusian president, because it made clear how susceptible his people are to Russian propaganda. After all, it cannot be seriously deemed as Russian concern for lack of human rights or democracy in Belarus. Of course, there are these problems under Lukashenka’s reign yet Moscow channel, critisizing Minsk for human rights violations and disappearances while silently omitting much grosser abuses in the own land, resembles not so old times of USSR lashing out at USA for American racism.

Weak national identity and nonexistent civic and political consciousness of Belarusians aggravate the situation, while assisting Russian attempts to tame if not to oust Lukashenka altogether. A bulk part of Belarusian opposition facing the problems with Western support are inclined to turn to old Eastern comrades and this week proved that Moscow can count not only on popular reaction to anti-Lukashenka propaganda but also look toward collaboration of many politicians left for years without access to power in the country.

Shushkevich – sometimes considered to be a moderate National Democrat – said that spin doctors of Belarusian regime are trying to begin in Belarus an anti-Russian PR campaign. Yet, Russia cannot be our enemy, we are neighbours. We are told that Lukashenka is a guarantor of our independence, but a person which does not know Belarusianhood, language and history cannot be such guarantor. Such leader cannot bring us to independence.

Such statements one time were monopoly of the Belarusian president, but now the situation seemed to be contrary – Lukashenka is struggling with Kremlin and opposition seeks Russian friendship! They have to hurry, since Moscow possibly have already made up its strategy and put its agents in action.

New public campaign “Tell the Truth” – widely believed to have at least some deals with Russia and favorable stature toward it – demonstrates a high professional level in both installing control over oppositional political and NGOs’ structures and buying up most active oppositional organizations. Actually, there are almost no critical materials about that campaign in non-governmental media anymore, while all steps of Lukashenka in confrontation with Russia are accompanied by new waves of attacks on him in both press outlets and public statements of oppositional politicians.

A leader of the campaign – the famous poet Uladzimir Niakliajeu – declared last week his intent to participate in presidential elections. Apart from Russian support supposed by many, the campaign has a lot of funding, and at the same time it is clear that this time Western gave opposition no major resources. The campaign first denied Russian origin of its money. However, one time Niakliajeu got tired of questions about money and rhetorically asked,

“Why it is bad to say the truth for Russian money?”

The explicitly pro-Kremlin position of campaign’s representatives during the gas conflict with Russia has only increased suspicions of campagn’s Russian link. Very illustrative was Niakliajeu’s statement on 600th anniversary of the Grunwald Battle, as he proclaimed that

“The Battle of Grunwald is a genuine symbol of cultural and political unity of Belarus, Poland, Lithuania and Russia”.

One can hardly find anything Russian to this battle except for later pan-Slavic and anti-German speculations of Russian imperial ideologues.

There is another bad news for Lukashenka. The campaign “Tell the Truth” regardless of its Russian connections, enjoys good relations with Western politicians. Niakliajeu began his international tour de force by visiting Canada but ended with meeting the US Secretary of State Hillary Clinton!

It means that Belarusian regime cannot count on West while facing the most extensive and intensive Russian intrusion in its history. And Minsk is showing first signs of weakness – always obedient to Lukashenka Belarusian judges this week did not even dare to close a facade organization of the campaign “Tell the Truth”.