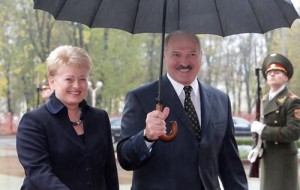 Amid tense waiting for presidential elections in Belarus and possible Russian attempts to influence the situation, 20 October, the President Dalia Grybauskaitė of Lithuania... 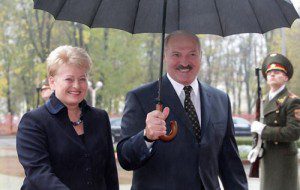 On October 16, the Belarusian and Venezuelan rulers had three-hour long talks behind closed doors in Minsk. Lukashenka thanked the Venezuelan leader for Venezuela’s aid to Belarus. In his turn, Chavez stressed: “Together we are building an alternative to world imperialism.”

Yuras Karmanau of The Associated Press * reflects on the results of the Minsk visit.

MINSK, Belarus — In one of his typical flamboyant gestures, Venezuelan President Hugo Chavez on Saturday promised to provide oil to the former Soviet republic of Belarus for the next 200 years.

Chavez, who was visiting Belarus on Saturday, promised that Belarusian refineries – the backbone of the country’s economy – “would feel no shortages of oil in the next 200 years.”

Venezuela in March agreed to ship 80,000 barrels of heavy crude a day to Belarus as well as create a joint venture to develop oil and natural gas projects in this South American country.

Belarus President Alexander Lukashenko, who critics have dubbed “Europe’s last dictator,” is anxious to diversify away from Russian oil supplies as his relations with Moscow grow increasingly sour. Lukashenko is facing a presidential election in December but Moscow has so far refrained from endorsing his bid.

Chavez was in Moscow earlier this week, where he reached a deal with Russia to build Venezuela’s first nuclear plant and signed a few energy pacts.

Prime Minister Vladimir Putin said Friday Russia would soon deliver 35 sophisticated tanks to Venezuela, but did not elaborate. Venezuela has since 2005 spent $4 billion on Russian arms, including helicopters, warplanes and Kalashnikov assault rifles.

Chavez also used his visit to Minsk as yet another occasion to lambast global capitalism:

“There are no debtors in our relationship,” he said. “We are comrades and we are building an alternative to imperialism – a multipolar world.”