While the Kremlin has achieved its primary goal by launching the Eurasian Economic Union last month, the leaders of Belarus and Kazakhstan look unsatisfied.

Both want to slow down the integration project's progress down and prevent it from spilling over... 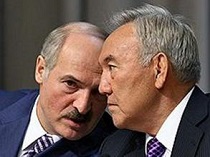 While the Kremlin has achieved its primary goal by launching the Eurasian Economic Union last month, the leaders of Belarus and Kazakhstan look unsatisfied.

Both want to slow down the integration project's progress down and prevent it from spilling over in the political arena.

However, Kazakhstan and Belarus lack common long-term goals, and their respective economic cooperation and any potential joint projects the might come up with would likely face obstacles as they try to get past Russia.

Though Belarus and Kazakhstan share the fear​ due to the Ukrainian crisis, Nazarbayev is in a better position to pull his together country. His policies have long aimed at strengthening national identity, appointing Western-educated professionals into senior positions and maintaining room for geopolitical manoeuvring. Belarus, it would seem, has quite a bit to learn from Kazakhstan.

On 29 May, the presidents of Belarus, Russia and Kazakhstan established the Eurasian Economic Union. Despite the fanfare surrounding the event, Nazarbaev and Lukashenka openly criticised the agreement a few days before the treaty's signing. The Belarusian head of state stated that this document differed from the one the parties had talked before.

As of late Belarus and Kazakhstan often appear to be in the same camp. Lukashenka and Nazarbayev both want to slow down the whole Eurasian integration project, or at least prevent it from going beyond  economic agreement into real political integration.

Both leaders have criticised the idea of creating a Parliament of the Eurasian Economic Union being fully aware that this would politicise the union and would almost surely be dominated by Russia. Moreover, Belarus and Kazakhstan worry about their ties because of Russia's role in the ongoing Ukrainian conflict.

A growing number of voices from both countries criticizers Eurasian integration. For instance, new regulations for business, which would stifle both Belarusian and Kazakhstani businesses, remain of the most frequently discussed effects of Eurasian integration. An imminent increase on the amount one has to pay for duties on imported cars also raises concerns.

However, in spite of their converging interests, Belarus and Kazakhstan have yet to coordinate their foreign policies towards Russia. Although in public officials talk about steady increases in imports and exports between each other and the importance of their strategic partnership, they both lack any particular affection for one another.

Why Countries Cannot be Partners?

Belarus and Kazakhstan distrust each other, in part, because they lack common long-term goals. They both became members of the Eurasian Economic Union primarily because of Russian pressure, not fruitful bilateral relations.

Their bilateral cooperation remains tiny considering their respective relations with Russia. In 2013, trade between Belarus and Russia appeared nearly 40 times greater than it was with Kazakhstan. In the case of Kazakhstan, it trades 30 times more with Russia than it does with Belarus. In the political and military arena, the proportions look even more significant. 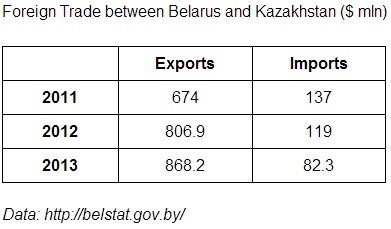 For Kazakhstan, bilateral relations play an even smaller role, as it has rather small volume of exports that make their way to Belarus.

Moreover, the Eurasian Union for Kazakhstan and Belarus remains little more than a mean to extract economic benefits from Russia. In this regard they look more akin to competitors than allies.

Geographical distance became one of the most serious obstacles to build their mutual trade relations, although Russia plays its own role in hindering their cooperation. Belarus and Kazakhstan have been negotiating an increase of the transit of Kazakh oil through Belarus and even its processing​.

Kazakhstan alsoremains interested in participating in the privatisation of Belarusian oil refineries, a role that is reserved for Russian business. In 2012 Kazakhstan's Ambassador to Belarus Ergali Bulegenov explained that not only would Belarus and Kazakhstan play a role in these negotiations, but Russia would as well.

Military-industrial cooperation can be named one of the successes of mutual relations. Belarus, for example, modernised 10 fighter jets for Kazakhstan, and as recently as the end of May more than 10 Belarusian companies participated in armaments exhibition in Kazakhstan.

Today, both countries require the expertise of the other. Belarus has few, if any, real experts on Kazakhstan, although the country, at least formally, looks the second most important partner of Belarus after Russia.

Due to the Ukrainian conflict, Belarus and Kazakhstan have inadvertently stumbled into a very similar geopolitical reality. Both nations remain authoritarian and afraid of outside interference in their internal affairs and realise possible cost of freeing themselves from Russia's grip.

Unlike Lukashenka, Nazarbayev’s regime has been steadily strengthening the position of the Kazakh language and has made plans to switch over from its modified Cyrillic alphabet into using the Roman alphabet.

He plans to elevate the Kazakh language extend beyond the nation's borders. On 28 April during his lecture at Moscow State University, the long-time Kazakh leader said that Eurasian Economic Union institutions should use the state languages ​​of all its member countries in its operations.

The Kazakhstani authorities are increasingly appointing foreign university graduates, who have received training through the Bolashak scholarship program, to senior positions in the government. Around 10,000 Kazakhs have received higher education abroad, mostly in the U.S. and the UK, thanks to this program.

Kazakhstan also has more space for geopolitical manoeuvring. On the one hand, China has substantial energy interests in the country and can act as a kind of counterbalance to Russia's influence. On the other hand, the West holds Kazakhstan in high regard, unlike Lukashenka's Belarus. After the Crimean conflict erupted, Lukashenka held talks only with Polish PM Donald Tusk, while Nazarbayev spoke with Obama and Merkel.

Kazakhstan and Belarus find themselves precisely where their life-long leaders have led them. However, Nazarbayev looks much more determined to preserve the independence of his country by strengthening its national identity and bringing in young professionals to work for the state. Lukashenka might consider picking his counterpart's brain for a bit – before it is too late.

Congress Of Belarusian Studies Scheduled for October in Kaunas 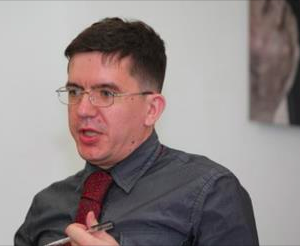 Organisers of the International Congress of Belarusian Studies officially published its list of sections and panels for the upcoming event.

This year's Congress will include a wide range topics such as culture, Belarusian language translations of the Bible and problems facing the modernisation of the Belarusian economy.

The Congress remains a rare opportunity for scholars from all over the world to gather with their colleagues from Belarus. This year it will take place the 3-5 October in Kaunas.

The Congress has already become a recognisable brand and an academic must for researchers and experts who professionally deal with Belarus.

Kaunas will be hosting a few hundred international participants for the event for the fourth time. During the Congress' gathering, this sleepy Lithuanian city becomes a vibrant meeting point for researchers of Belarus.

Belarus Digest spoke with Aliaksei Lastouski, Head of the Department of Modern History at the Belarusian Collegium and a senior analyst at the institute for political studies Political Sphere, which is the main organiser of the Congress, in order to understand what it is all about.

Who Comes to the Congress in Kaunas?

The Congress has already become a permanent fixture of autumn in Kaunas. The International Congress of Belarusian Studies took place there for the first time back in 2011 as an initiative of Andrei Kazakevich, the Director of the institute for political studies Political Sphere.

Belarusian researchers constitute a majority of the participants of the Congress. Other scholars come primarily from neighbouring Poland, Lithuania, but also from more remote and less obvious places, like Japan. Last year nearly 400 scholars from 16 countries took part in the Congress.

The large number of participants from countries other than Belarus proves that there is indeed a niche for Belarus-oriented research. The event fills this gap and facilitates researchers coming together. The popularity of the Congress also demonstrates the demand from the Belarusian scholarly community to meet and communicate with their colleagues from other countries. Belarusian scholars continue to carry out their work in stifling isolation, Aliaksei Lastouski argues.

The organisers of the Congress aim to provide participants with an opportunity to meet up, present their research, as well as discuss their ideas and potential opportunities for future cooperation. Indeed, the organisers guarantee facilities, so the participants can busy themselves networking with other scholars.

Participants stay in the same hotels, have lunch in the same place, and have ample opportunity to talk during coffee breaks – apart from more practical purposes, it also helps to create a specific sense of solidarity, according to Lastouski.

The Congress also promotes researchers of Belarusian area studies, awarding them annually for the best Belarus-related publication in humanities and social sciences. What clearly distinguishes this event from others, is its multidisciplinary nature. This year the list of sections to be covered is to include economics, politics and society.

The Congress: "a Zone of Freedom", but is not Politicised

According to Lastouski, the Congress remains a “zone of freedom”, where academics can freely present and discuss their research without fear of being censored, unlike in Belarus. The organisers openly welcome scholars with various views.

But at the same time, the Congress is not a political platform. The event should be regarded as a platform for constructive dialogue where its participants can freely discuss differing views on the development of the country.

Although the Congress specifically brings together Belarus-oriented scholars, and a majority of the researchers who attend are Belarusian, it takes place in neighbouring Lithuania rather than in Belarus. The organisers decided to organise it outside of the country in order to minimise the risks associated with potential academic censorship.

This is an issue that a number of Belarusian-related events and organisations have faced and, as a result, have moved to Lithuania in search of more favourable conditions. For example, the Belarus Research Council holds its events in Vilnius and the institute for political studies Political Sphere is also registered in Lithuania.

Moving Back to Belarus

Belarus, naturally, would be the most ideal place to organise these events event. "Kaunas is just a temporary place for the Congress", Lastouski explains. Given the current circumstances, the city has simply several advantages over other places outside Belarus.

These include its high quality infrastructure and affordable accommodation for the congress' participants, even for those coming from further abroad. Organisational support from the Kaunas-based Vytautas Magnus University is an additional argument supporting holding the congress there. “I hope that the situation in Belarus will improve, and there will no longer be any restrictions or barriers to organise it there one day", Aliaksei Lastouski explains – but for now, this is just wishful thinking.

Over the past couple of years Lithuania has become a hub for a number of Belarus-oriented events. Clearly, Belarus' neighbour offers something that is scarcely available in Belarus, as true in the case of academic events – a better environment for discussion of pressing political, economic and social issues.

Lithuanian cities, such as Kaunas and Vilnius, are well-known for hosting not only the International Congress of Belarusian Studies, but also the European Humanities University and other conferences and seminars devoted to Belarus. It seems that both Lithuania and Belarusian civil society derive benefits from this situation. Lithuanian receives financial benefits and provides support, while Belarusian scholars and activists can freely work on their projects.

The organisers of the Congress have already closed the call for submissions for individual applications. However, anyone interested in the event, can register to attend one or another section as a guest. The registration form is available here.