Eurasian Economic Community: Belarus May Be Getting a Raw Deal

Recently, an association of SMEs in Belarus declared a one-day symbolic strike. They responded to what they view as the stifling business climate established as a result of Beluras' integration project with the Moscow-led Eurasian Economic Community.

Recently, an association of SMEs in Belarus declared a one-day symbolic strike. They responded to what they view as the stifling business climate established as a result of Beluras’ integration project with the Moscow-led Eurasian Economic Community.

Other factors also indicate that Belarus may be getting a raw deal in the Kremlin’s latest pet project. In parallel with its economy becoming further entrenched in the Customs Union, Belarus is continuing to drift into further isolation, making its economy extremely vulnerable to the whims of its benefactor.

On 25 June, a spokesman from the association Perspectiva, Anatoly Schumchanka, spoke to reporters at the Forum of Sole Traders to announce that they were calling on other entrepreneurs to carry-out a one day strike on the 27 June. They also initiated a gathering of signatures to call for Belarus’ removal from the Customs Union. Many regions participated in the strike throughout the whole country, most of them bringing regional market places to a standstill.

While on the surface such a gesture may appear to be relatively inane, particularly considering the small number of SMEs at work in Belarus’ economy, the announcement was telling. Business in Belarus is, on the whole, not seeing the benefits that they were expecting upon joining the Eurasian Economic Community (EurAsEC), also known as the Customs Union. On the contrary, Belarus’ economic situation does not appear to be gaining much from it.

The action carried out on 27 June throughout Belarus also shows the frail nature of the EurAsEC, as well as the poorly constructed policies and mechanisms for promoting economic growth. While for Belarus it holds some political benefits by raising the countries stature on the global arena, the benefits to society as a whole are not at all obvious. It has, however, provided Lukashenka with a new rationale for asking for influxes of Russian subsidies and loans.

Belarus, much like many other nations that emerged out of the collapse of the Soviet Union, retains many of its business inhibiting features: a tedious bureaucratic state, little or no access to credit or loans, a stifling regulatory and legal environment, an irresponsive system of education to produce skilled workers for the labor market etc.

Add to this the requirement, which came into effect in Belarus on 1 July, to go through an expensive process of getting light-industry products – the bread and butter of SMEs – certified by authorities for sale on the Customs Union’s general market, and you have the recipe for the collapse of SMEs as a whole in Belarus.

According to the OECD’s 2012 SME Policy Index: Eastern Partner Countries report, SMEs make up only 20% of the Belarus’ GDP, with 70% being attributed to state-run enterprises. In comparison, in Poland it makes up for about 47% of its GDP, with France at 62%.

Similarly, Russia and Kazakhstan SMEs account for roughly 20% of its visible economic activity, though it should be noted that they have less state-run enterprises. While other measures can be employed to show an economy’s growth, the percentage of SMEs in an economy is an indicator of its strength and stability. SMEs tend to fill the gaps that larger companies, particularly state-managed companies, cannot by providing regular employment opportunities at the local level and are key players when it comes to innovation. Belarus’ numbers indicate that its economy remains uncompetitive, prone to global economic fluctuations in prices, and lacks the infrastructure essential to sustainable economic development. 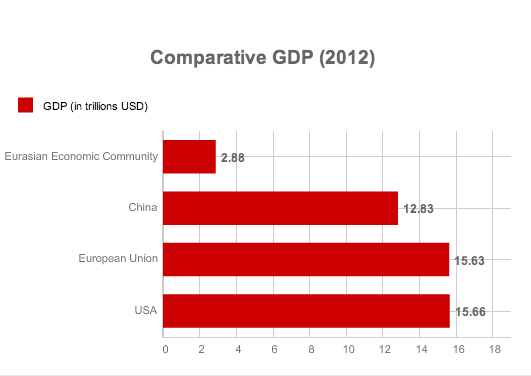 The rationale for joining the Eurasian Economic Community appears to have been two-fold: becoming part of an influential economic bloc to strengthen the Belarusian economy and presence internationally, and more deviously, to maintain a platform for the Belarusian government to continue to extract rents from Russia in the name of mutual economic ties and regional stability.

Although the Eurasian Economic Community is still young, with its underdeveloped institutions and policies, projections would seem to indicate that its competitiveness with other regional powerhouses, China and the EU, is limited. Without serious changes in Russia, Kazakhstan and Belarus’ own economic development, it will continue to struggle both regionally and globally outside of the energy market.

China’s successes in Central Asia, including in Kazakhstan, was part of the logic in forming the new economic bloc – creating an authorative body that would be able to protect the “interests” of Kazakhstan via Moscow.

With the EU’s growing trade prowess and formal agreements on developing trade with Ukraine, Moldova, Armenia and Georgia through its Deep and Comprehensive Free Trade mechanism, indicates the limited attractiveness of the EurAsEC even within areas considered to be within Russia’s sphere of influence.

What is Belarus’ Endgame?

Russia’s long-awaited accession to the WTO in 2012, Kazakhstan’s membership in 2013, and EurAsEC observer Ukraine’s own membership are evidence of each countries’ respective leadership looking to further integrate into the global economy and boost their own competiveness.

Belarus’ own relations to the WTO have come to almost complete standstill. How precisely the EurAsEC will deal with this issue, or how Belarus will be able to overcome the marked improved capacities of all of their neighbours, remains to be seen.

Between its political isolation and dependency on Russia, Belarus can choose from essentially two options. Either it will continue its feudal arrangement with Russia and make itself increasingly vulnerable to encroachment or it can begin to seriously undertake the multilateral approach of its EurAsEC partners.

As both President Putin and President Nazarbayev have shown, the West is quite willing to work with authoritarian governments who do not observe its standards of democracy and freedom. Unlike Russia and Kazakhstan, whose energy resources and military cooperation in relation to Afghanistan have normalised their ties with the West on some level, it would appear that Belarus has only political prisoners to offer in exchange.

Its ability to attract substantial foreign direct investment from parties that will not place conditions on them, such as Iran or Indonesia, have been few and far between. Even China, with its increased presence, will not put at risk its very fruitful economic ties with Russia for the modest gains to be made in Belarus.

While Belarus was able to avoid the shock therapy that many of its neighbours endured in the 1990s, a worse fate may await it, should the Belarusian government not take drastic steps to stem the simmering economic crisis. Perhaps it could start by listening to its citizens. They might have a few ideas worth listening to.

Devin Ackles is a Kyiv-based analyst and project coordinator of the Centre for Transition Studies.

Belarusian Government: Getting Older and Less Capable of a Reform

As the majority of the high-ranking officials, who have been in top positions for the last 10-15 years get older the average age grows. With some exceptions, instances of young officials joining the top governing elite remain rare. This raises serious concerns about how Belarus could go through the challenges of the declared economic modernisation.

This table prepared by Belarus Digest shows the years of birth and current age of the high-ranking Belarusian officials. The table does not rank the officials in accordance with their formal or informal roles in the political process. Their placement in the table is quite random but it makes the age point quite clearly.

The average high-ranking Belarusian official was born in 1956 and his/her age today reaches 56 years. This nearly equals Alexander Lukashenka’s age. And the average member of the government (the Council of Ministers) is just one year younger – 55.

The oldest persons in the Belarusian political hierarchy remain the Speaker of the parliament’s upper house Anatol Rubinau, Chairman of the Supreme Court Valyancin Sukala and Deputy Prime Minister Piotr Prakapovich. They have reached the age of 70. The youngest one, Andrei Shorets (40 years old), heads the Ministry of Housing and Utilities.

Among Oldest in the Post-Soviet Space

Comparisons with other former Soviet states reveal that the Belarusian governing elite becomes more senior than the region’s average.

Comparing the age of the most senior state officials in Belarus and the neighbouring countries also shows that Belarusian top officials are rather old.

Can we call the present-day Belarusian government and ruing elite in general a gerontocracy?

While the top Belarusian officials get older the majority of the public servants stay in their 30s and 40s. According to the Belarusian statistics agency, as of the beginning of 2013, 53,7% of all state officials were born between 1963 and 1983. And only 11.2% of them have already reached the pension age.

However, the latter have far better positions in the decision-making system. And here one more aspect seems crucial to this discussion: intuitively, the age of the high-ranking officials has to impact their ability to think and act innovatively. In particular, the ability to design and carry out effective systemic and sectoral reforms that Belarus definitely needs. This seems particularly topical in the framework of the declared modernisation plans.

The examples of such reformers as Estonia in the 1990s or Georgia in the 2000s suggest that the younger the government the more likely it is to achieve groundbreaking results in modernising a country.

The average age of the Estonian post-Soviet government that Prime Minister Mart Laar formed in September 1992 was slightly above 30. And the premier himself only celebrated his 32nd birthday. Mart Laar names the young age of his government as one of the factors of the successful reforms: “we did not know what was real and what was not and thanks to that managed to accomplish unreal results”.

On the contrary, when the 71-year old Deputy Prime Minister of Belarus Piotr Prakapovich becomes responsible for the program of economic modernisation we can hardly have high hopes in him. Especially after his time as Chairperson of the National Bank and the financial turmoil of 2011 that followed Prakapovich’s term at the National Bank.

Overall, younger officials find it difficult to enter the highest echelons of power. Several factors could explain it.

First, the Belarusian bureaucratic machine follows rather specific selection rules. Connections seem to be a core criterion. The interviews with public servants that the Liberal Club conducts within its studyon the public administration reform clearly confirm this.

And the higher an official climbs the career ladder the more his/her age becomes important. The corporate logic does not normally welcome “wunderkinds”: one has to earn the right to get high.

Second, top officials in Belarus are appointed by the authoritarian president rather than elected by a popular democratic vote. Regular elections only have to legitimise the leader’s decision in the eyes of Belarusians and foreigners. And in this situation a long record of good and loyal service becomes more important than talent and competence.

In addition, Lukashenka might find more psychological comfort working with the old cadres he knows well. As the saying goes, no one prefers to change horses in midstream.

However, exceptions happen from time to time. The latest examples include the minister of utilities and housing Andei Shorets (40 years old) and the president’s economic affairs aide Kiryl Rudy (35 years old). Each such case becomes resonating news within the state apparatus and society at large.

Moreover, there has been a lasting story of the so called “young wolves” in the government led by the president’s oldest son Viktar Lukashenka. But no one knows when and if these “young wolves” manage to gain full control and whether they will still be young by that time.

In the meantime, the old generation continue to rule the way they deem proper. They would love to preserve the political and socioeconomic status quo in the country and for that try to prevent any serious reform as long as they can. And even if the situation forces them to go for reforms one can hardly expect any innovative thinking there.