Formation of Precinct Election Commissions – Digest of the 2016 Parliamentary Elections

On 27 July, the formation of Precinct Election Commissions (PECs) ended. PECs are responsible for conducting the vote count. In total 5,971 PECs were formed inside the country, plus another 47 abroad. On July 29, the Central Election Commission... 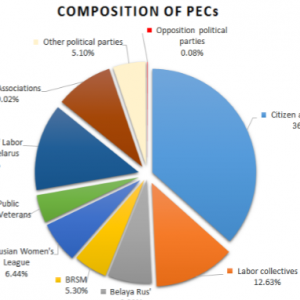 On 27 July, the formation of Precinct Election Commissions (PECs) ended. PECs are responsible for conducting the vote count. In total 5,971 PECs were formed inside the country, plus another 47 abroad. On July 29, the Central Election Commission (CEC) published a list of PEC representatives and held a press conference. In total 65,856 representatives were included in PECs.

Five hundred and fourteen opposition party representatives applied to serve on PECs. Only 53 (10.31 percent of the applicants) were approved to serve as commissioners. The PEC acceptance rate of those representing, what are generally known as, pro-governmental parties was significantly higher – 89 percent.

Registered opposition parties recently held party congresses to nominate candidates for parliament. “Fair World” nominated 50 candidates, Belarusian Social-Democratic Party Gramada (BSDP-G) – 34, Belarus Popular Front (BPF) – 72, and United Civil Party (UCP) – 70 (32 of whom are members of the unregistered party Belarusian Christian Democrats who were nominated as part of a coalition agreement with UCP). Candidates from other forces such as “Tell the Truth” and Movement “For Freedom” are attempting to register their candidates through the signature collection process. The candidate nomination ended on August 1.

Human rights observers noted the use of “administrative resources” to promote pro-governmental candidates in state-run media and to support their signature collection efforts.

“Belarusian Association of Journalists” (BAJ) published a report on the coverage of parliamentary elections in 18 media outlets. The research reveals that state-run television gives much less airtime for coverage of the 2016 elections compared to other topics such as sports.

On July 27, the formation of PECs for the 2016 parliamentary elections ended. In total 65,856 commissioners were included (out of 73,293 nominated). Opposition political parties nominated 514 people to PECs. Only 53 opposition representatives (10.31 percent of nominees) were included in PECs.

This constitutes 0.08 percent of the total number of PEC commissioners. According to CEC reports the rate of inclusion for pro-authority organisations (such as “Belaya Rus”) and pro-authority parties was considerably higher. The following chart based on CEC figures demonstrates the significant difference in inclusion rates between pro-government and opposition parties. 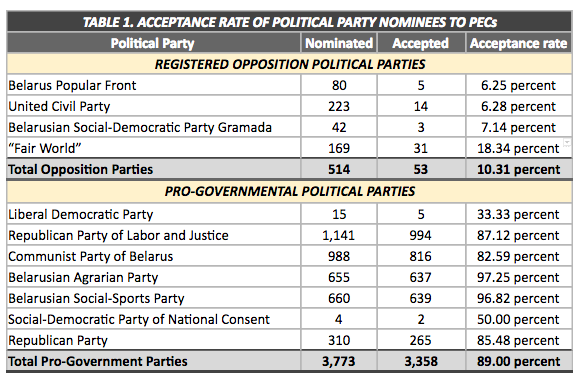 PECs were formed during meetings of local executive committees and administrations. A PEC consists of between five and 19 commissioners. A new legislative amendment allowed international observers, representatives of political parties, and public associations to attend the PEC formation meetings. The amendment also required discussion of “professional and political qualities” of nominees at these meetings.

Representatives of opposition political parties shared their impressions of PEC formation meetings. UCP hopeful Nikolay Kozlov (Starovilenskiy district #105) said that a large portion of nominated UCP representatives were not invited to PEC formation meetings. Local administration claimed these UCP members could not be reached over the phone. Another UCP activist from Mogilev informed candidates that PEC commissioners were approved without a discussion of their qualifications.

“Right to Choose” reported that activists nominated to precinct commissions in Senetskiy district #76 from the labour union REP received calls from local officials, urging them to withdraw their PEC applications.

Officially registered opposition political parties nominated candidates for parliament at their party congresses. The table below summarises the outcomes of opposition congresses.

Unregistered opposition political parties/movements, “Tell the Truth” and “Movement For Freedom” sought to nominate their candidates through signature collection. “For Freedom” Deputy Chair Ales Logvinets organised a major signature collection event in Minsk coinciding with the anniversary of the adoption of Declaration of Sovereignty of Belarus on July 27. Logvinets invited Belarusian musician Lavon Volski to perform at the event. According to media estimates, the signature collection picket-concert was attended by over 1,500 people.

Forces generally considered loyal to the authorities also held congresses to nominate their candidates (see the summary table below).

The public association “Belaya Rus’” (which currently has 67 seats in the parliament) reported on its website about signature collection pickets in Minsk.

In total, 443 initiative groups sought to nominate candidates through the signature collection process. One thousand signatures are required to nominate a candidate. According to the parliamentary election calendar, the candidate nomination period (by party or labor congress or signature collection) ended on August 1. Candidate registration will be determined by district election commissions between August 2 and 11.

In mid-July, the “Right to Choose 2016” election observation campaign released their first observation report, in which they conclude Belarus’ authorities “have not listened to the recommendations provided by domestic and the OSCE/ODIHR mission observers.” I

In recent weeks, “Human Rights Defenders for Free Elections” continued to publish weekly observation reports (July 11-17, July 18-24) noting the use of the “administrative resource” both for signature collection and the promotion of certain candidates’ in state media. On July 30, the human rights observers released a report on the formation of PECs, which concluded executive committees had a “discriminatory approach” toward representatives of opposition parties.

Meanwhile, “Belarusian Association of Journalists” (BAJ) published a report analysing how elections are covered by 18 Belarusian non-state and state-run media. Their analysis reveals that the state-run online media outlets “gave much less prominence to the forthcoming election than subjects such as sports or weather.” For instance, the news show on ONT channel allocated 1.8 percent of airtime to cover the elections, while 20 percent was allocated for sports.

Democratic political activists reported various incidents that occurred during signature collection. For example, an unknown person threatened members of the initiative group of BPF contender Natalya Iljinich in Mariana Horka. “Tell the Truth” candidate Pavel Kurskiy filed a complaint because he was not allowed to collect signatures in two dormitories in Minsk.

Is Belarus Turning away from the Socially-Oriented State Model? 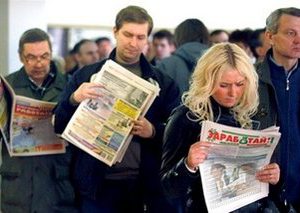 On 5 August 2016, Andrei Labovich, First Deputy Minister of Labour and Social Protection of Belarus, said that the new Law on Employment would tackle the problem of the ‘professional’ unemployed.

Simultaneously, in August 2016 the National Statistical Committee of the Republic of Belarus released data on employment figures in the sphere of industry for 2011-2016. According to this information, during the last five years this sector alone has witnessed nearly 150,000 job cuts.

Such a clear contradiction raises a question about the future of the Belarusian social model. Does it mean that Belarus plans to give up on its artificially created 99.5% employment rate and what would the state do with those who lost their jobs in times of deep economic crisis?

Being unemployed in Belarus: nothing to envy

Belarus has one of the strictest systems of social protection for unemployed people in Europe. Unemployment benefits remain ridiculously low (near $20 per month) and not every jobless person is even eligible for them.

The country has always prided itself on its artificially low unemployment rate (near 0.5%). Employment in state sector, which dominates the economy, has played a significant role in maintaining political and ideological control over the people.

It also served as an additional channel for allocation public resources for the local elite and so called ‘red directors’ of state enterprises. A large amount of people working in Russia, as well as a developed informal economy, have helped promote such a policy.

The economic crisis changed everything

Experts claim that since 2015 Belarusians have been looking to find jobs in the EU rather than Russia. According to Yandex data, the number of job requests in Poland by Belarusians in 2015 grew fivefold compared to 2014. However, due to language barriers, visa regulations and legislative peculiarities, the EU has failed to become a full-pledged substitute for Russia when it comes to employment.

Unfortunately, the official statistics fail to demonstrate the real number of Belarusians employed in Russia. However, staffing companies and many individuals claim that salaries for Belarusians in Russia fell threefold or more.

But will this become an engine for social unrest? This seems unlikely.

After the crisis of 2011 the authorities faced a dilemma. Maintaining the same number of employees became too expensive, while growing unemployment risked causing social protests and even riots. However, two main changes occurred after this crisis.

Firstly, the Belarusian authorities are much less wary of possible riots after the successful suppression of the so called ‘silent protests’ in summer 2011. Authorities believe that people’s standard of living means much less than number and welfare of security forces. The fact that these agencies faced no serious cuts – neither financial nor personnel – in 2011-2016 proves this point.

Secondly, the government has started to pay much more attention to the informal economy by considering it a source of additional revenue.

In April 2015 the president signed his famous Decree ‘On preventing social sponging’ as a further step towards the rollback of total employment policy. ​Some experts believe that the document aimed to prevent dismissals from state enterprises because of low salaries, as well as to struggle against ‘shadow’ business activities.

This seems only partly true. First of all, the Decree failed to prevent further dismissals. Moreover, the national Statistical Committee confirms that the total number of jobs cut in the country has even grown in December 2015 – June 2016. The table below demonstrates this idea:

These figures illustrate the growing rates of job cuts within a relatively short period of time. For example, in these seven months the sphere of industry witnessed 21% of all job cuts during the last six years.

Secondly, the Decree failed to struggle against ‘shadow’ business activities. Authorities claim the number of unofficially employed people to be 400,000 – 500,000, while up to July 2016 only 4,000 people registered to pay this tax. The actual number of eligible tax-payers remains unclear till now.

Unemployment in Belarus threatens authorities in two different ways: possible social protests and ‘brain drain’ from vitally important spheres. While the first risk is proving to be less real and significant, the second one is much more concerning for Belarusian officials.

Thus, according to the Ministry of Labour and Social Protection, only Minsk city requires more than 1,500 doctors and nurses, and the staffing level at first aid services amounts to only 67%. The number of vacancies exceeds the number of registered unemployed in the sphere of medical care by 81 times.

Lack of professionals may result in a further degradation of more or less profitable enterprises, export-oriented plants, strategic infrastructure etc. Moreover, such specialists have more opportunities to find a job in the informal sector or abroad. The Decree could become an effective instrument to prevent such dismissals.

It seems that Belarusian authorities are set on a course to further toughen the conditions of employment. Completely bankrupt enterprises risk being closed, which would result in people having no chance to obtain appropriate social security. Employees at relatively successful or important enterprises have to put up with lower salaries, longer working hours and more control.

The World Bank in its Belarus Economic Update for April, 2016 confirms that: 'The labour market is under stress due to weak performance of the construction, industrial and agricultural sectors. State-owned enterprises as a whole did not shed labour, but rather shortened the working week.'

Many experts have proposed that authorities promote more support for the unemployed, in particular by raising the amount of employment insurance to at least around $80 per month. These experts argued that given the increasing job cuts and lack of financial resources it would be cheaper for the government to support the unemployed than to sustain economically ineffective enterprises.

The new Law on Employment crashed these hopes of liberalisation of unemployment protection policy. Moreover, the authorities chose the worst of both world – no jobs, no opportunities for self-employment, no social protection, but strong police and security agencies always ready to suppress any protests and feeling no lack in financing or vacancies.