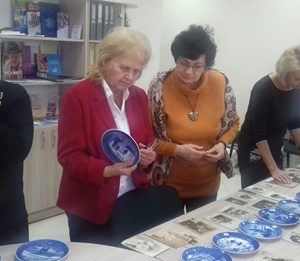 Sakavitskiya Sustrechy invite volunteers. On 4-5 March, Sakavitskiya Sustrechy/March Meetings of Belarusian CSOs will take place in Minsk. The forum will focus on the participation of CSOs and citizens in the local communities’ development and gather over 150 practitioners from around the country. The organisers – Office of European Expertise and Communications (OEEC) and New Eurasia – invite volunteers to help during the event.

Grassroots leaders’ stories. OEEC together with media CityDog.by, 34mag.net, Zautra.by, Imena magazine and platform Talaka.by continues a series of publications about active people who change the life of their communities. The recent stories tell about Falanster youth NGO that motivates IT-specialists to work for free for non-profit initiatives and a photographer from Braslaŭ who triggered a wave of activism in his native town.

The City-2 calls for fellows. The City-2 is a continuation of the City project, implemented by the Centre for Cultural Management last year: the project presents civic activism in an attractive, inspiring manner of a professional reality show and motivates a wider audience to be active in community life. Grand Prix is a thematic study visit to Brazil. Deadline for applications is February 28.

Human Rights Situation in Belarus in 2016. According to Human Rights Centre Viasna's annual review, the year saw a continuation of the policy of ‘soft practices’, which began in August 2015, as the authorities kept abstaining from detention of protesters. At the same time, the year was marked by a nearly sevenfold boost in the number of cases when citizens were fined for exercising freedom of peaceful assembly and expression, as compared to the previous year.

The Second Annual London Conference on Belarusian Studies will take place on 25 February. It is organised by the UCL School of Slavic and Eastern European Studies, the Ostrogorski Centre and the Belarusian Francis Skaryna Library and Museum. The speakers from Belarus, the United Kingdom, Japan, Germany, the US and other countries will come to London to present and discuss Belarus-related research.

Congress calls for sections. The 7th International Congress of Belarusian Studies announces a call for sections (panels). The Congress that will take place on 15-17 September 2017 in Warsaw is the most representative annual academic event, which unites all major centres of research on politics, society, and culture of Belarus. Application deadline is 10 March 2017.

Intellectual club by Svetlana Aleksievich presents its next guest Rūta Vanagaitė, a Lithuanian writer. The lecture will be held on 2 March at the Embassy of Lithuania; around 150 people will be invited to attend. Meanwhile, TUT.by posted the record of the 2nd meeting of the Nobel laureate, Svetlana Aleksievich Club with the participation of the Russian journalist Stanislav Belkovsky.

Imena magazine launches a new crowdfunding campaign. The goal is to collect around $90K to provide the annual magazine activity. Launched in 2016, Imena is the first Belarusian public media that exists only due to the readers' donations. The magazine tells about people in need and helps raise money and attract volunteers to address social problems.

Golden Age University launched in Homiel. From early January, the Regional Resource Centre in Homiel hosts classes for Homiel seniors of 55+ years old. The most demanded skills among the pensioners are computer and mobile literacy, knowledge about non-traditional approaches to health as well as history and art. Such non-formal Universities for seniors are organised in Hrodna, Viciebsk and Minsk.

TechMinsk International Accelerator invites participants. TechMinsk the first International Entrepreneurship School in Belarus. TechMinsk prepares the next generation of global entrepreneurs and changemakers from Eastern Europe and helps them build rapid high growth companies and go global. The School is paid. Deadline for applications is 10 February.

Belarus at the centre of Russia-NATO wargame simulation 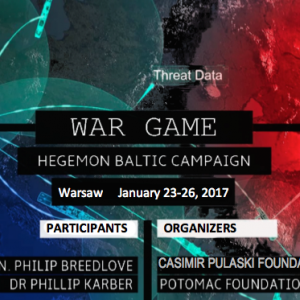 The wargaming initiative focused on the scenario of a Russia-NATO conflict and analysed the nature of the Russian military threat to the Baltic States and Poland. As a result Belarus was found to be a key contributor to regional security and stability by containing Russia's aggressive strategy.

The author of this piece also took part in the simulation.

Inside the wargaming simulation

The wargame simulated a military conflict between Russia and NATO caused by a Russian attack on the Baltics. It used the ‘Hegemon’ computer-based programme which was originally created by the United States during the Cold War.

The Potomac Foundation already conducted several wargaming simulations using the 'Hegemon' platform last year: at the Baltic Defence College; in Washington with a group of defence attachés; at the Allied Rapid Reaction Corps (ARRC) headquarters in the United Kingdom; and with the Latvian joint staff.

A source of concern

Military analysts from the Potomac Foundation believe that the ongoing reestablishment of the 1st Guards Tank Army of the Russian Armed Forces has far-reaching strategic intent. This raises a number of security concerns.

During the Cold War the 1st Guards Tank Army was stationed in East Germany as part of the Group of Soviet Forces in Germany. It served as the mobile, hard-hitting spearhead and vanguard of a Warsaw Pact drive into Western Europe. Today the army is located in Russia's Western Military District, close to Belarus, where it would likely be called into action in the event of a conflict in the Baltic states.

The 1st Guards Tank Army consists of around 3 Divisions and 3 manoeuvre Brigades – a very powerful and offensive strike force. Its assets will soon number approximately 700 Tanks, 1,300 other armoured vehicles, 500 tubes of artillery and multiple rocket launchers, covered by a dense, mobile-radar air defence umbrella. The 1st Guards Tank army is equipped with the latest Russian armament, and has been declared an early recipient of the new Armata T-14 Main Battle Tank.

Russia has already announced that the 1st Guards Tank army will be ready by this spring. The Kremlin is planning to test it in the upcoming West/Zapad – 2017 exercise. This will take place in Russia’s Western military district as well as in Belarus in September 2017.

Military analysts from the Potomac foundation also announced that Russia has ordered over 4,000 rail flat cars for the deployment of heavy equipment into Belarus. According to their estimations this is sufficient to transport all the heavy vehicles of the 1st Guards Tank Army and a substantial amount of ammunition. This means the West/Zapad – 2017 military drill may serve to bring together the most powerful concentration of offensive weaponry in Eastern Europe since the end of the Cold War, allowing the Kremlin to present military threats to NATO.

The Russia-NATO conflict begins with Belarus

In the Baltic wargaming simulation scenario, the conflict between Russia and NATO begins with Belarus, with Belarusian leader Alexander Lukashenko refusing to establish a large-scale permanent military presence of Russian troops on the territory of Belarus.

Therefore the Kremlin decides to launch a coup,overthrowing Alexander Lukashenko and replacing him with a fully controlled and loyal secret service general. The new leader of Belarus then officially invites Russian troops into Belarus. After this the Kremlin begins to generate hybrid threats to the Baltic countries and Poland.

NATO then decides to activate Article 5 and sends High Readiness Forces to protect these states. The Kremlin interprets this step as a declaration of war and responds with a large-scale offensive operation against the Baltic states and Poland. According to this scenario Russia even deploys a tactical nuclear weapon on the territory of Belarus.

Some conclusions and results

The Baltic wargaming simulation took place in an ‘off the record’ format. This means the organisers and participants will not share all the details and their conclusions publicly. They will deliver a post-event report to Polish and US officials. Nevertheless, the wargame demonstrates a significant shift in Western strategic perception of Belarus.

The West has until now viewed Belarus and its leadership as a fully controlled satellite and political-military appendix of Russia. Today western strategists are reviewing their attitude towards these myths and stereotypes about Belarus, with Alexander Lukashenko demonstrating a strong commitment to defend the sovereignty and independence of his country through political and military means.

Recently Alexander Lukashenko has reaffirmed his position on the Russian air base in his press conference of over seven hours that brimmed with anti-Kremlin sentiment. According to his statement, Belarus does not need Russian military bases on its territory.

Obviously such a position contradicts the Kremlin's strategic intentions to transform Belarus into its military outpost. This may lead Moscow to activate the crisis scenario posited in the wargaming simulation.

That is why Dr. Phillip Petersen, Vice President for Studies at the Potomac Foundation, suggests that the West now consider how to support independence and sovereignty of Belarus.

He proposes disconnecting Russia from the SWIFT (Society for Worldwide Interbank Financial Telecommunications) if the Kremlin intervenes in Belarus and undermines its independence. To rejoin the SWIFT, Moscow would need to withdraw its troops from the territory of Belarus and restore its sovereignty.

Only a strong, sovereign and independent Belarus can contribute to regional stability and security and prevent a heated military confrontation between Russia and NATO.

Arseni Sivitski
Arseni Sivitski is the Director of the Centre for Strategic and Foreign Policy Studies based in Minsk; he is also a military officer in reserve for the Belarusian Armed Forces.
all articles » Follow @
Belarus security Belarus-Russia NATO Russia Zapad 2017