In June the Investigatory Committee of Belarus confirmed that Eduard Paĺčys, the editor of the website 1863x.com, was extradited from Russia and is undergoing criminal investigation.

The website was known for its critical position towards Russian and Belarusian authorities, and... 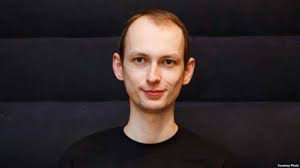 In June the Investigatory Committee of Belarus confirmed that Eduard Paĺčys, the editor of the website 1863x.com, was extradited from Russia and is undergoing criminal investigation.

The website was known for its critical position towards Russian and Belarusian authorities, and its author had remained anonymous until his arrest.

Political activists have already recognised him as a political prisoner, while human rights groups are waiting for more evidence.

A new political prisoner is in the interests of neither the European Union nor the Belarusian government, as a warming of relations continues to be important for the bilateral agenda. However, Belarusian authorities may use the case of Eduard Paĺčys to demonstrate that any activity inspiring national conflict, including anti-Russian discourse, will be stopped immediately.

1863x.com as a reaction to Russian aggression

The website 1863x.com first appeared about two years ago at the start of the Russian-Ukrainian crisis. It became known for for publishing political texts, often with acute criticism of Belarusian and Russian authorities. The editor of the website remained strictly anonymous and worked under the pseudonym John Silver.

In November 2015 John Silver announced that half a year ago special police had detained him and he was sent to mental hospital for a month. At the same time, the authorities initiated two criminal investigations against him, and in October 2015 he decided to leave Belarus.

The story of the arrest

On 25 January 2016, 1863x.com announced that John Silver had been arrested in Russia. Since that day the website has ceased updates. The Russian nationalist resource “Sputnik i pogrom” later published an article alleging that John Silver was kept in Bryansk Prison, his real name was Eduard Paĺčšys and he originated from the western Belarusian city of Lida. He attempted to obtain political asylum in Ukraine, but later decided to go to Russia, where he was detained while crossing the Russia-Ukraine border.

On 22 June the head of the Investigative Committee of Belarus Ivan Naskievič confirmed that John Silver had been extradited to Belarus and indeed appeared to be Eduard Paĺčys. The authorities charged Eduard with two criminal offences: inciting hatred on grounds of race, nationality, religion, language, or other social affiliation, and manufacturing and distributing pornographic materials.

Editor of Naša Niva newspaper Andrej Dyńko argues that the Eduard's publications only contained criticism of Russian aggression in Ukraine. As for pornographic materials, Eduard's girlfriend later revealed that someone had indeed sent him such materials. However, they depicted an insult to Belarusian nationality and national symbols, so Eduard decided to publish a critical article about this “art." These became the grounds for accusations.

On 23 June around 50 political activists held a peaceful demonstration in which they sent postcards to Eduard at the central post office in Minsk. According to Zmicier Daškievič, a former leader of oppositional organisation Youth Front, people in the street were reluctant to take part in the demonstration as they did not know who Eduard Paĺčys was.

Political activists including Mikalaj Statkievič, representatives from Belarusian Christian Democracy, Youth Front, and others consider Eduard a new political prisoner and are calling on international actors to recognise him as such and assist in his immediate release. However, human rights activists have yet to publish any statements on this case and are awaiting more information.

As human rights activist Valiancin Stefanovič explained to Naviny.by, the publications need to be analysed by specialists to understand whether authorities are persecuting Eduard for expressing his views or if he really was inciting hatred. 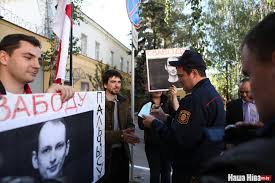 Some experts claim that the authorities initiated the case against Eduard to demonstrate loyalty to Russia: harsh critics of Putin are not tolerated in Belarus. However, expert at Belarus Security Blog Andrej Parotnikaŭ stated to the news agency BelaPAN that “there are a lot of critics of the Kremlin in Belarus, including famous journalists, but they do not face any pressure”. Instead, he sees anonymous criticism of Belarusian authorities as a more likely reason for his arrest.

Indeed, Belarusian authorities barely tolerate any participation in anti-governmental actions, as they established full control over the opposition long ago. Anonymous activists with radical ideas immediately become a target for special services. Cases of repression against anarchists and football ultras amply demonstrates this. On the other hand, Russian could have possibly facilitated a criminal case against Eduard simply by pointing out the significance of this case for bilateral relations.

Belarusian authorities, it seems, try to prevent anyone from playing the "Russian card" and giving Russia grounds for accusing Belarus of Russophobia and nationalism. They may use Eduard's case as a warning to those considering organising political actions.

Foreign governments and human rights groups have so far remained silent on this case and are apparently waiting for more information and evidence. However, the appearance of a new political prisoner looks highly undesirable for both the Belarusian government and the the EU .

No one wants political prisoners in Belarus

Belarusian authorities hope to hold a smooth electoral campaign with a democratic facade and thus facilitate further rapprochement with the west without any real political change. This will require absence of repression of the opposition, a free electoral campaign, cosmetic improvements in electoral law, and most importantly, absence of political prisoners.

The issue of political prisoners has long been the greatest obstacle for unfreezing Belarus-EU relations. The release of the last of them in August 2015, along with peaceful presidential elections, led to the lifting of EU sanctions against Belarus and a warming of relations. The authorities will hardly risk putting another person in jail for political reasons and must have solid evidence of his guilt to present to the west.

The EU also has no desire to initiate another round of sanctions against Belarus due to an aggravation of the human rights situation in the country. Every rapprochement in bilateral relations is a long and tiresome process, and the massive EU decision-making machine hardly wishes to start this cycle over again. The fact that regional security is a new European priority makes any conflict with bordering states undesirable, and Europe tends to wait for clear facts before formulating any critical statements on Belarus.

Belarusian authorities are unlikely to sentence Eduard Paĺčys to a serious prison term and he may end up with a fine or suspended sentence. The European Union has no appetite for escalating the tension either. However, the case of John Silver will become a warning sign for those intending to take radical action in Belarus: any activism involving the Russia-Ukraine conflict will be punished severely. 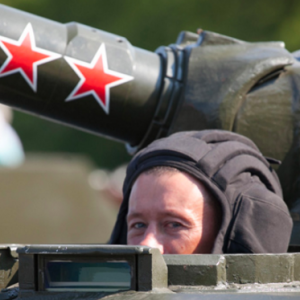 On 3 July, Belarus celebrated Independence Day. The holiday commemorates not only the country’s statehood, but also victory in the Second World War. On this day in 1944, the Soviet army liberated Minsk from German troops.

About 5,000 people participated in the event this year, which included military parades, concerts, and a massive fireworks display. Unlike previous years, many participants wore clothing with elements of Belarusian national ornament (vyshyvanka).

Depending on their political views, Belarusians celebrate independence on three different days: 3 July, 27 July, and 25 March.

President Alyaksandr Lukashenka proposed celebrating Independence Day on 3 July and this question was approved by a national referendum in 1996 (viewed as fraudulent by Western observers and the opposition). Between 1991 and 1996, the holiday took place on 27 July, to commemorate the Declaration of Belarusian Sovereignty from the Soviet Union adopted in 1990.

The Belarusian opposition and many Diaspora groups celebrate independence on 25 March, to commemorate the 1918 proclamation of the Belarusian Peoples Republic (BNR). The BNR existed for ten months on territory controlled by the German Imperial Army at the end of the First World War. The republic’s supreme governing body, Rada BNR, has survived to this day as a government in exile. 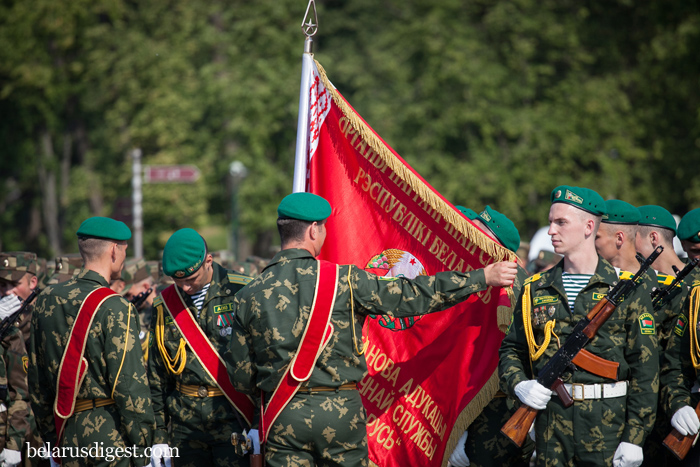 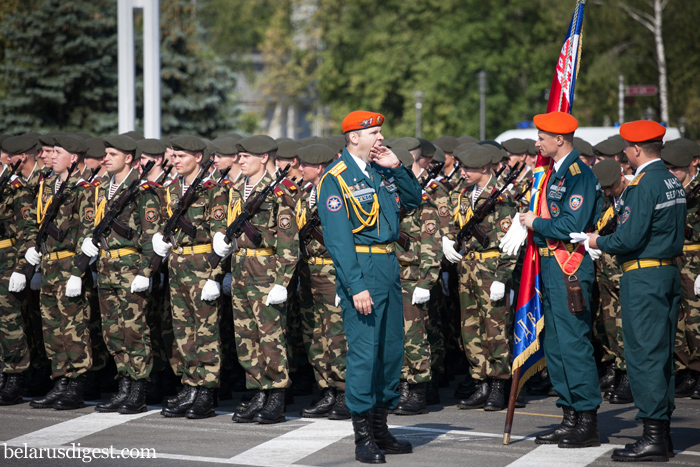 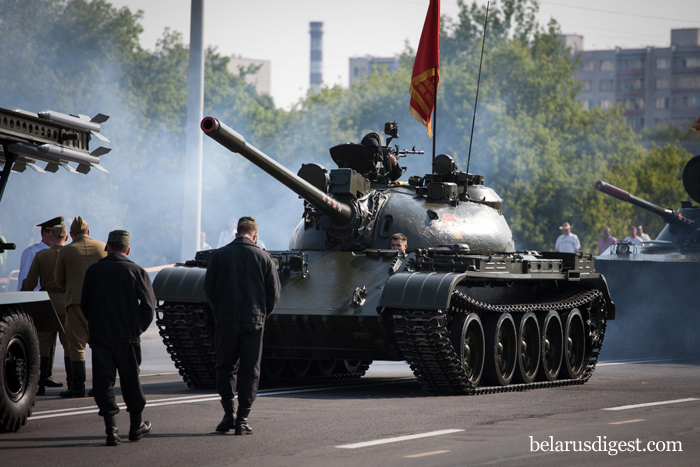 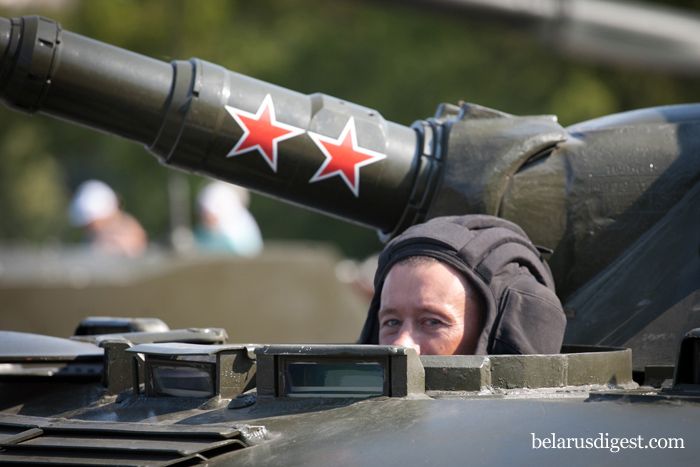 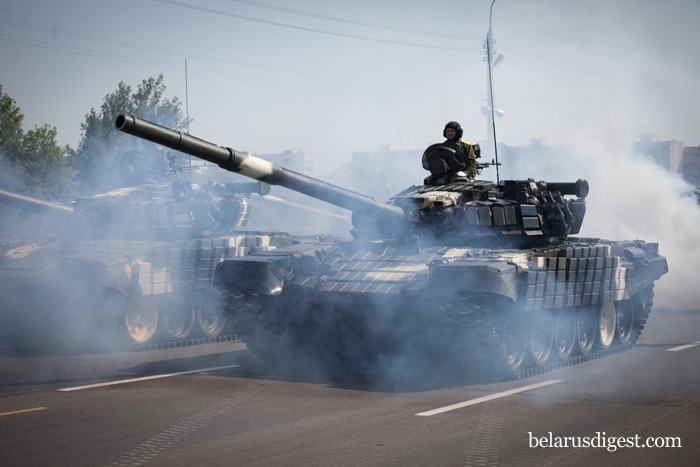 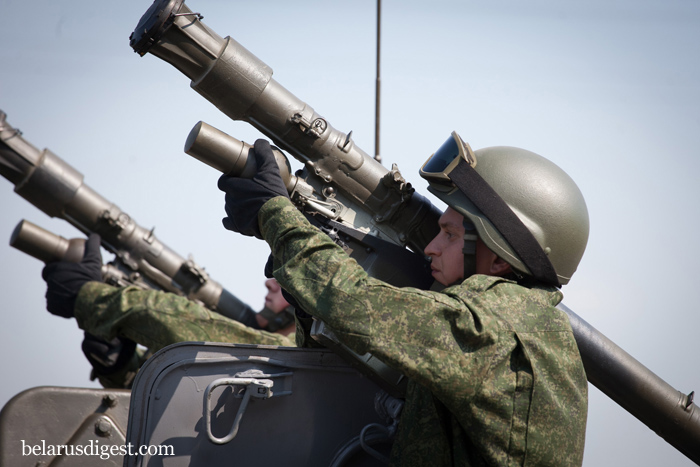 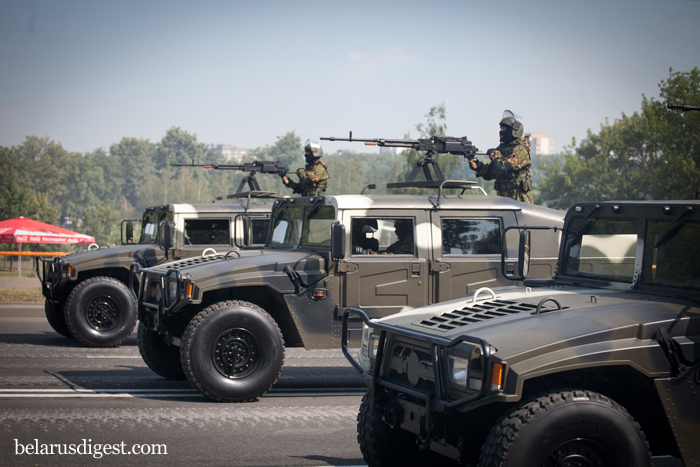 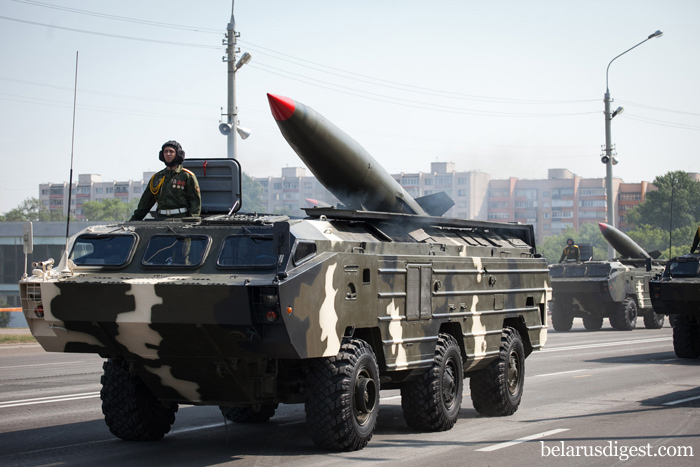 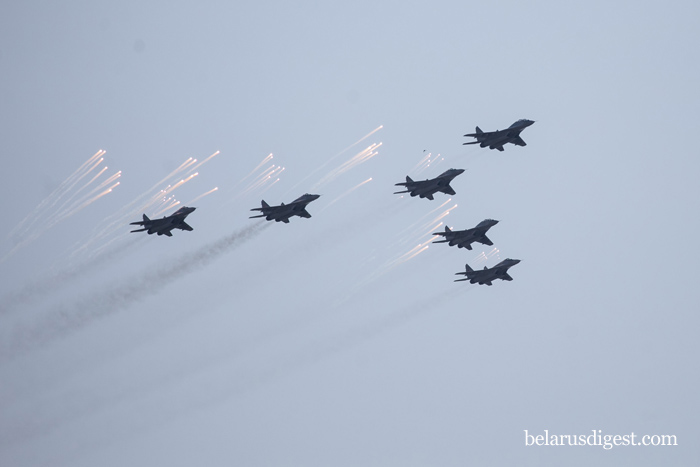 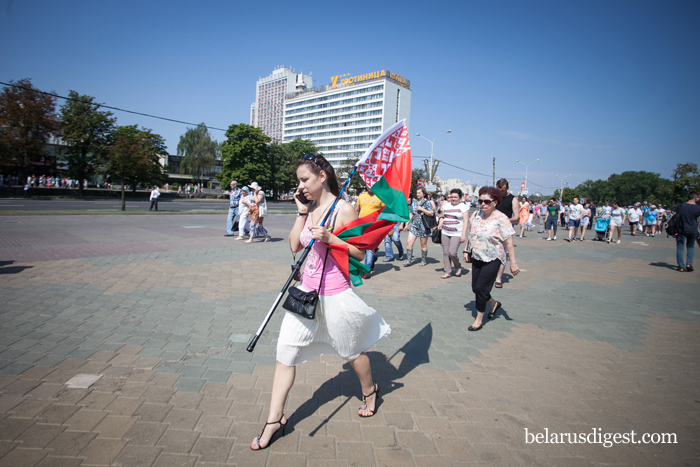 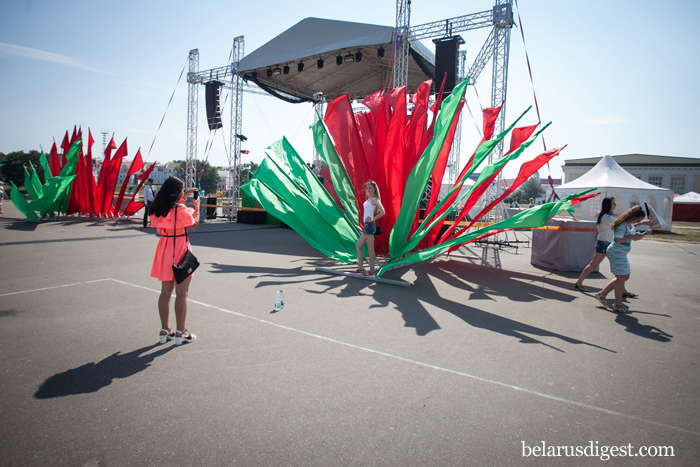 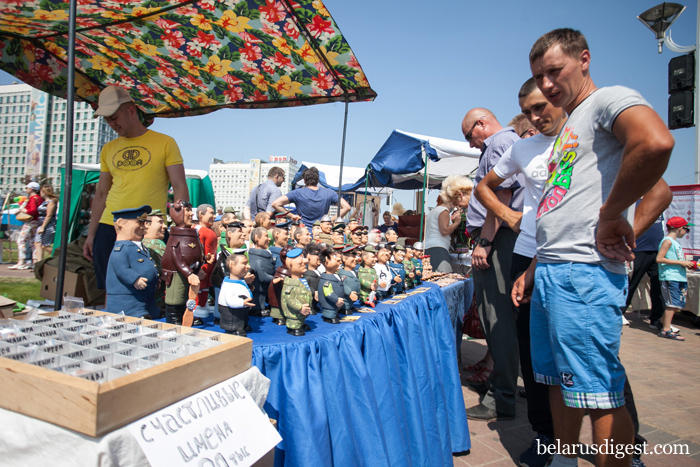 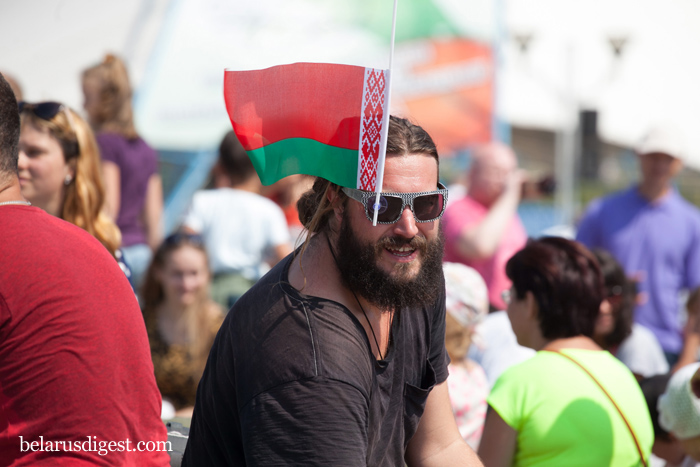 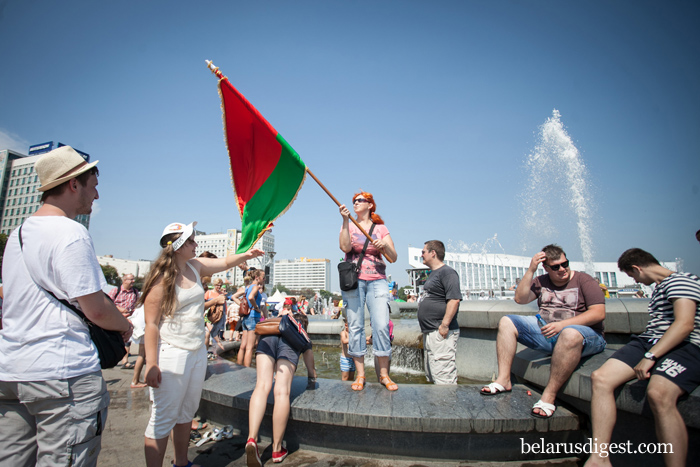 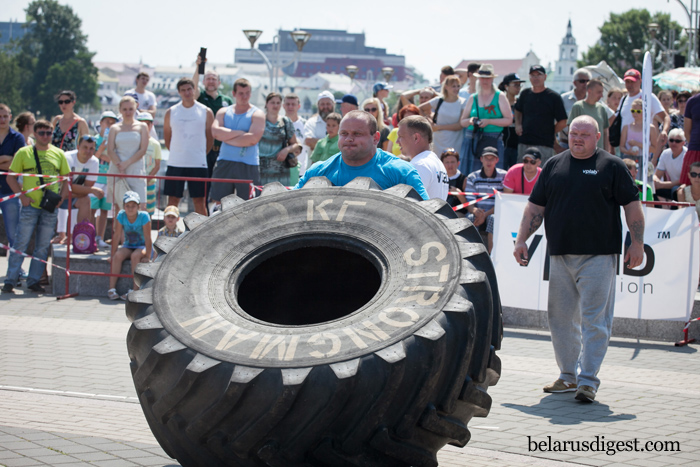 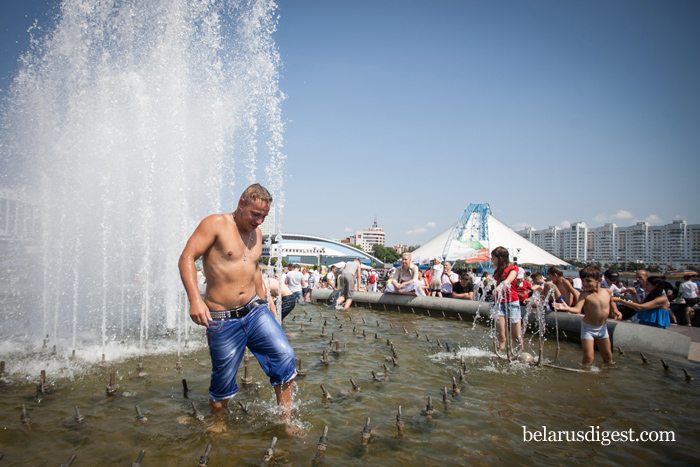 About the photographer: Siarhei Leskiec is a freelance photographer whose work focuses on everyday life, folk traditions, and rituals in the Belarusian countryside. Originally from Maladzeczna region, he received a degree in history from Belarusian State Pedagogical University.