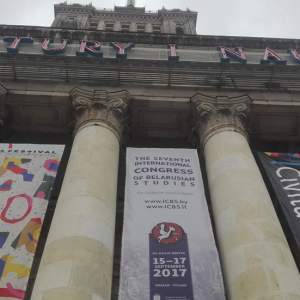 Programme of KEF-2017 is published. 7th International Congress of Belarusian Studies in Warsaw gathers over 600 researchers.

Golden Age University in Hrodna kicks off 9th educational season for the elderly. First non-conference for schoolteachers will take place in October.

ACT drafts proposal to change NGO tax law. Press Club Belarus invites for its events of the 3rd season.  This and more in the new edition of the Belarus civil society digest.

KEF 2017 presents its agenda. Annual Kastryčnicki/October Economic Forum, KEF will take place on 2-3 November in Minsk. KEF 2017 is aimed at finding solutions that will help lay the foundation for the future of the country and close the gap between politics and practice. The forum is organised by IPM research centre in concert with BEROC and CASE since 2013.

GEW in Belarus will be held in Belarus for the 7th time. Global Entrepreneurship Week (GEW) will take place on 13-19 November and focus on startups. Workshops on working with startups and developing innovations will be held in the regional capitals for local self-employed businessmen. GEW activities in Belarus are coordinated by Bel.Biz company.

7th International Congress of Belarusian Studies was held on 15-17 September in Warsaw. Over 600 researchers involved in studying Belarus attended the event. Organised by a set of independent think tanks, the annual Congress aims to promote a deeper understanding of Belarus in the country, region, and world. Next year, for the first time in its history, the Congress can take place in Belarus.

DranikFest guests ate half a ton of potatoes. On 30 September, for the third time, Mahilioŭ hosted Festival of the most famous Belarusian – draniki/ potato pancakes. The festival gathered around 10 thousand people. Traditionally organised by the Urban Initiatives Centre together with indifferent citizens, the DranikFest is becoming the hallmark of Mahilioŭ city.

Ideal yard. The team of Minsk Urban Platform presented its project – an ideal yard in Serabranka, one of the districts of Minsk. This is a free cars territory with a seating area for children and adults. Activists and the local residents closely interacted to change the yard on their own, starting from negotiations how it should look like to be really convenient for everyone up to joint mounting the equipment.

Minsk Urban Forum held on 19-30 September. The two-week event invites “to listen to Minsk and get better”. The forum topic City as the Process includes several thematic blocks like planning the future development of the city, re-development of former industrial spaces, and civic participation of Minsk residents at various levels. The organiser is Minsk Urban Platform CSO.

Belarusian Human Library celebrates the 3rd anniversary. On 13 October, Staloŭka XYZ, a creative space in Minsk, will host a festive Human Library that challenges stereotypes and prejudices through dialogue. The event will be held in the format of the international Human Library methodology where people are books on loan to readers.

Belarus hosts Weeks of Sustainable Development 2017, from 25 September to 25 October. The event is held for the fourth time and aims to contribute to the further strengthening of the movement for sustainable development in Belarus. Under the Weeks, over 150 events across Belarus will be held, including 108 in the regions: roundtables, competitions, local festivals, educational events, etc.

Golden Age University in Hrodna is launching the 9th season. The opening ceremony took place on 5 October. This academic year the University enrolled 150 students aged 55+ and included 50 educational courses. The University works in Hrodna since 2007 for local seniors adhering to the principle of active ageing. The organiser is Practical Competencies Studio/ Third Sector Centre. 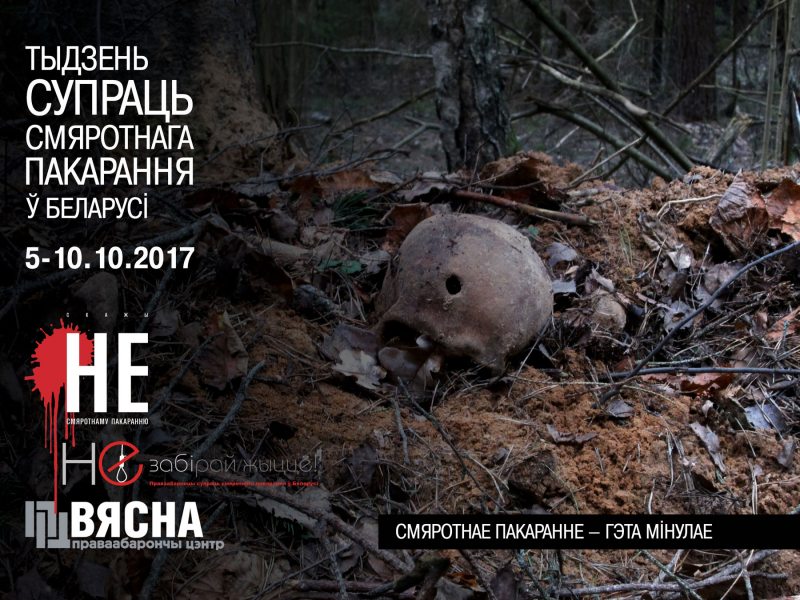 Poster of the Week Against the Death Penalty. Source: spring96.org

Club of Educators. On 7 October, fifty specialists in the additional and non-formal education from different regions of Belarus will gather to create the Club of Educators, a professional community to exchange experience and best practices. This is an initiative of the graduates of educational courses that took place under the Learn to Act project, supported by the EU and DVV International.

Practical Politics School recruits students. The School is aimed at the formation of knowledge and organisational-activity tools to help socially active young people to orient in politics and implement practical political actions. The organisers are the Centre for European Transformation in partnership with the Belarusian Green Party.

First non-conference for schoolteachers EdCamp Belarus will take place on 14 October in Minsk. EdCamp (Education Camp) is an international initiative emerged in the U.S. and spread around the world. The format of non-conference allows the participants to develop themselves an agenda as well as interact after the event. Belarusian organisers are Global Shapers Minsk HUB and the Belarusian School Society.

Proposals for changing tax legislation for CSOs have been prepared by ACT NGO. After collecting signatures under the proposals, they will be sent to the Ministry of Finance, the Ministry of Taxes and the Department of Humanitarian Affairs. In particular, ACT proposes not to impose an income tax on foreign charity assistance received by CSOs.

Press Club Belarus launches the 3rd season. Press Club as a platform for the professional development of the media community organises regular thematic events. On 26 September, the Media Talk series invites for a meeting on the protection of sources of information. On 2 October, Belarusian media resource KYKY.org will conduct an open editorial briefing. 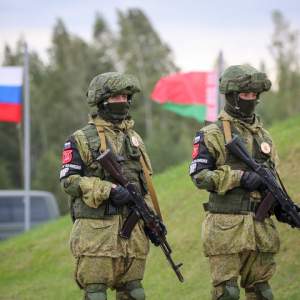 In September, analytics on Belarus both at home and abroad almost entirely focused on Zapad 2017 military exercises and related issues of security and defence.

Arciom Šrajbman claims that Russia showed Belarus the ceiling of its independence, Jaŭhien Prejhierman responds that rumours about these limits are exaggerated.  Andrej Jahoraŭ explains why Belarus was not occupied during Zapad 2017. Belarus in Focus notes that the military drill prompted a heated discussion about national unity.

Rumors About the Ceiling of Belarusian Independence Exaggerated – Jaŭhien Prejhierman, at TUT.BY, argues with a journalist Arciom Šrajbman and states that the limits of Belarusian sovereignty are determined not by Moscow or Kiev, but Minsk’s own ability to pragmatically manoeuvre between conflicting interests of neighbours. In fact, Zapad 2017 exercises showed that Belarus does not know how to effectively act in the information wars.

Why We Were Not Occupied. What Zapad 2017 Was About – Andrej Jahoraŭ, at Belarusian Journal, notes that the military Russo-Belarusian drills are over; no occupation took place. According to the expert, the most important things occurred in the information sphere. Zapad 2017 is a doctrine of a consociational war, with an empirical test of the parties’ reactions to information moves and attacks.

Belarus Is Shown the Ceiling Of Its Independence – Arciom Šrajbman, TUT.by, draws attention to two events of the last month, which remind the real limits of today’s Belarusian sovereignty. The journalist means an incident with a young Ukrainian Pavel Grib who was detained in Homiel and moved to Krasnodar detention centre and thousands of Russian soldiers who entered Belarus for the military exercises.

Belarus Is the Real Victim of Russia’s Zapad War Games (Op-ed) – Jaŭhien Prejhierman, The Moscow Times, notes that this year’s hype around Zapad 2017 exercises, obviously, reflects the West’s deep mistrust for Russia and its military. The analyst believes that Russia and the West need to understand that it is in everyone’s strategic interest to keep Belarus as a neutral ground for peace talks and not a part of the Russian-Western confrontation.

Putin Pointed out to Lukashenka His Place – Aliaksandr Aliesin, a military analyst, believes that Putin and Lukashenka separately inspected Zapad 2017 exercises because Russia wanted to show Lukashenka, that he is not an equal partner. The military exercises sharpened the contradictions between Russia and Belarus, while Lukashenka is still trying to play independence.

Situation In the Field of National Security And Defence of Belarus. August 2017 – According to monthly monitoring of Belarus Security Blog, the most important event of the month was the kidnapping of a Ukrainian citizen Pavel Grib by Russian special services in Homiel. Provocation was intended to cause a crisis in the Belarusian-Ukrainian relations.

Zapad on Belarus’ Mind – A non-paper of the 7th Belarus Reality Check analyses the recent developments in EU-Belarus relations and concludes that Minsk will try further building trust with the West, and continuing to work with and appease Russia, as its only ally. Organised by EESC, the 7th Belarus Reality Check took place in June 2017, in Vilnius to contribute to the policy debate in and outside of Belarus.

The Zapad Military Exercise Reveals Putin’s Fear – Leonid Bershidsky, Bloomberg, considers the large-scale Russian military exercise known as Zapad, which started in Belarus on 14 September, as a propaganda success: it has alarmed Russia’s NATO neighbours and garnered so much Western media coverage that one might think it was an actual combat operation. It has also provided an important insight into the fears of the Russian and Belarusian rulers.

So Far From God, So Close To Russia: Belarus and the Zapad Military Exercise – Fredrik Wesslau & Andrew Wilson, ECFR, consider that fears that Russia may use Zapad 2017 as cover to carry out a hybrid operation in Belarus are overblown. Moscow has other levers with which it can coerce Minsk, and it neither needs nor is interested in another military adventure at the moment.

Zapad 2017: What It Reveals About the Prickly Russia-Belarus Relationship– Bruce McClintock & Bilyana Lilly, The National Interest Magazine, suppose that the Kremlin has little to gain from using Zapad 2017 as a pretext to establish the military presence in Belarus. Belarus continues to view Russia as its principal strategic military partner and seems likely to do so in the future.

Belarus’ Susceptibility to Russian Intervention – David R. Marples believes that Russia’s overriding geostrategic goal in Belarus is to keep a stable, relatively pro-Russian regime in power. Therefore, the chances of a Russian military intervention in Belarus are low for the near future.

Zapad-2017. Who Will Benefit From the Russian-Belarusian Drills – Arciom Šrajbman, Carnegie Moscow Centre, believes that despite all the reputational risks, Minsk will try to derive maximum diplomatic benefit from the military drills. On the one hand, Belarus shows to Western observers that they can trust to Minsk’s guarantees. On the other hand, Belarus will convince Moscow that it does not ‘follow the path of Ukraine’, not being afraid to host large-scale exercises with Russian troops.

West-2017 Russo-Belarusian Military Drill Causes Controversy in Belarusian Society – Belarus in Focus notes that the September military drill prompted a heated discussion in civil society about national unity. The fact that the Belarusian authorities keep alternative political views exclusively outside the political system has increased the risks of external influences or interference in domestic political processes with possible destabilisation.

West-2017: Facts and Analysis of Threats – Ihar Tyškievič, the Ukrainian Institute of Future, argues whether there is a danger for Ukraine because of the joint military drills between Russia and Belarus. He concludes that the exercises will be held as they are publicly stated, and media noise will go away.

Indicators of Belarus export activity in the 1998-2016: what are the chances for growth? The work analyses the indicators of export activity of Belarus in 1998-2016. It studies how the structure and complexity of the country’s export basket, its competitive advantages, penetration to foreign markets and inclusion in global value chains changed over the period.

Poverty and vulnerable groups in Belarus. Consequences of the recession of 2015-2016. This issue of the ‘Review of poverty and vulnerable groups in Belarus’ is dedicated to the analysis of various aspects of absolute and relative poverty in the Belarusian regions. The study was carried out on the basis of sample surveys of living standards of households in 2013-2016.