Belarus-Russia relations Belarusian language Belarusian military travel to Belarus
Why Support Belarus Digest? Donate
BelarusDigest > All > Loan from the IMF or Privatization by the Russians?

Loan from the IMF or Privatization by the Russians?

Recently the Belarusian weekly Belorusski Rynok discussed the chances of getting an IMF loan. At least three factors play against it. First, Belarus failed to fulfill a number of conditions for the loan extended two years ago. For instance, it failed to establish an agency of financing for state programs, and while the agency on privatization was established, it stopped short of privatizing anything. Moreover, just before the 2010 presidential elections, the government has dramatically raised salaries to woo the electorate.

Apart from that, the IMF usually imposes caps on the amounts a country can borrow in accordance with the country's quota. Belarus has already used its quota. In 2008, following extension of the US $2.46 loan to Belarus the IMF Managing Director Dominique Strauss-Kahn noted that the access the country was granted to its resources in the amount of 420% of the quota was unprecedented.  However, Belorusski Rynok noted that the IMF was a flexible institution and may extend funds beyond the quota of Belarus.

The political component in the IMF's future decision also needs an explanation. The United States and the European Union heavily criticize the Belarus government for its human rights violations. Both introduced sanctions against Belarus, although the European Union stopped short of serious economic sanctions. They insist that Belarus should stop repression against the opposition and release political prisoners before discussing any financial aid.

Belarusian weekly Nasha Niva quoted an anonymous European diplomat in Minsk, according to whom Belarus authorities were sending inconsistent signals, both in politics and economics. As an example, he mentioned Lukashenka's statement that political prisoners would soon be released. However, following that statement two former presidential candidates – Mikola Statkevich and Dzmitry Uss were sentenced to long prison sentences.

The diplomat also recalled new restrictions on media, and the threat to close two leading opposition newspapers – Narodnaya Volya and Nasha Niva. According to him, if the situation remains the same, the European Union will continue to ignore any overtures made by the Belarusian authorities. As far as the economic situation in Belarus is concerned, he had the impression that Belarusian authorities are doing nothing to change the course of events. The government negotiates a possible loan with the IMF, but decisions are not being made by the government.

Although the West dislikes Lukashenka and his policies, they are also concerned about the increasing role of Russia, which continues to build up pressure against Lukashenka. This week, the Russian energy state-owned giant "Inter RAO EES" halved its supplies of electricity to Belarus. The reason was the debt of Belarus in terms of energy supplied in March-April of this year.

The Russian Ambassador to Belarus, Alexander Surikov stated this week that the main reason for the economic crises in Belarus was the change of the terms of Russian oil supply with Belarus. Between 1995 and 2007 Belarus did not have to share the export duty on refined oil products with Russia. Starting in 2007, it had to share with Russia, which "caused a hole" in the Belarusian budget.  Surikov noted that the government needed to correctly develop a program to combat the crises, secure external finances, privatize state property and reduce imports. According to him, it was time to understand that Belarus economy can no longer afford the level of spending it had in the past.

The Financial Times proposed in its editorial to extend an IMF loan to Belarus because that would help the country reduce the threat of placing Belarus irreversibly in Russia’s geostrategic and economic orbit. This would reduce the independence of Belarus to a cipher and set a disturbing precedent for other former Soviet republics. The editorial concluded that an IMF program, properly designed and implemented, would contribute to the goal of free and independent Belarus.

Others consider that providing an IMF loan to Lukashenka means prolonging the existence of the Belarus regime. This year the official Minsk faces pressure which it has never seen before and is closer to collapse then ever. Providing help to it today would mean to waste the momentum. Moreover, in the past not only did Belarus not comply with recommendations of the IMF it failed to implement any significant reforms and has largely "eaten up" the loans.

It appears that for the long-term development of Belarus privatization of enterprises is highly desirable. That would help attract the badly needed foreign investments and make state enterprises more efficient. However, Western investors worry about political risks in Belarus and the instability of its legal and political system. Russian investors, on the other hand, have enough financial resources and hope that the Kremlin could protect their interests.  Even if the state enterprises are sold to Russian business groups, Belarus will be able to tax and otherwise regulate those enterprises and even expropriate, if necessary.  In the future, the same enterprises can be sold by the Russian investors back to the state or to Western investors.

However, privatization by the Russian capital has two potential downsides. First, the privatization process will not be transparent. A significant share of the proceeds of sales of large enterprises will end up with corrupt Belarusian and Russian bureaucrats. Second, early 1990s showed that Russian investors tend to loot assets instead of thinking long-term. The situation in Belarus today in many respects resembles the early 1990s, which may prompt Russian businesses to behave as before. Another downside of inviting Russian investors is that it will further strengthen Belarus' dependence on Moscow. Also, Russian privatization in the early 1990s demonstrated that it was better to invite investors with superior technologies and management skills rather then selling to the locals.

However, because the demand for the external financing is so great, it appears inevitable that Russian businesses will take over many Belarusian state enterprises. And even the IMF loan will not help the Belarusian authorities to keep its state-owned property. Once the structure of the economy is changed, Belarus will no longer be the same. 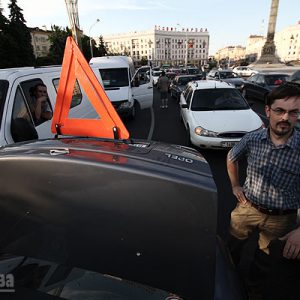 Yesterday, several hundred car drivers participated in a mass protest action called “Stop Gasoline” against the rising fuel prices in the Belarusian cities of Minsk, Homel, Brest and Mogilev. Following the call of the automobilist organization “Za-Avto”, drivers blocked the central avenues in the country, pretending that their cars have broken down.

For hours, traffic jams and the blowing of horns made circulation on Independence Avenue in Minsk impossible. Gasoline prices were to rise about 30% on June 8th and they had risen by 25% just two weeks ago. In the aftermath of the protests, four activists have been arrested and sentenced to pay fines. The organizers of the rally have started collecting money to pay the fines.

It is a revealing characteristic of contemporary Belarusian society that the rise of fuel prices finally brought many apolitical people to the streets. This was a protest organized by an automobilist association and not by a political party or movement.

Over the last years, a very popular thesis among Western observers and diplomats in Belarus has been that the only thing that will make people take part in mass demonstrations will be an extreme deterioration of their living conditions. As long as Lukashenka can keep the relatively high living standards, low food and ultility services prices, they were convinced, Belarusians would not care to take part in demonstrations.

What has happened in Belarus in the last two months is exactly the scenario that those observers predicted as a very serious threat to the Lukashenka regime. However, during the last weeks it became clear that the galloping inflation and rising prices would probably not lead to the predicted mass protests. Instead of complaining publicly and going to the streets, Belarusians usually chose a typical, matter-of-fact way of dealing with the situation. They bought what was left of cheap products, organized a black market website for currency exchange and they had no other topic for conversation apart from the rising prices.

Whenever two people met, they discuss prices for bananas, buckwheat and cheese. Non-state media published leading articles dealing with the prices for food and electronic devises several days in a row while the state media largely ignore the crises. However, there was no feeling of discontent which reached the public sphere. Most people do not attribute the economic crisis to the mistakes of Belarusian authorities, but tend to repeat what they hear in the official propaganda: the resulting crises was the fault of those Belarusians who were buying cars abroad and also from the world financial crisis.

Until yesterday, most Belarusians refrained from expressing their discontent about deteriorating living conditions publicly. Being asked when they would finally start protesting against political repression on the one hand and pauperization on the other hand, they replied: “You see, we have gone through crises like this several times during the last 20 years. We are not like Tunisians or Egyptians; we don’t go to the street and protest. It is not a part of our mentality.”

Yesterday’s car rebellion was the first notable protest event since the brutal crackdown of the post-election demonstration in December 2010. While non-state media already hope that they will lead to a broad protest against the regime, this may not happen.

Cars have become one of the most important status symbols in Belarus during the last months. Belarusians were buying cars in the West before the custom fees on them will rise at the beginning of July. There are more cars, including very modern ones, on the streets of Minsk than ever before. Depriving the Belarusians of driving their new cars because they cannot afford fuel anymore hits their self-image. They have stopped buying  imported products because they are just too expensive but many are unwilling to stop driving their cars.

Lukashenka has already demanded that fuel prices should decrease beginning Thursday morning. It appears that the Belarusian leader is quick to understand that he is on the verge of fighting a battle on too many fronts. He is fighting against the West, against Russia, against the opposition, against international media outlets, against the internet and now against discontented social groups.

The question is whether Belarusians will make a connection between the devastating economic situation and  political situation. If this happens, the power of protesters will be too overwhelming to handle for the regime.