Migration and National Security in Belarus

It aims "to stabilise population density and extend life expectancy". To achieve these admirable goals the... 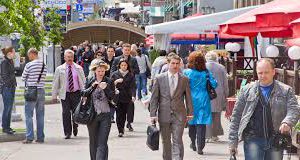 It aims "to stabilise population density and extend life expectancy". To achieve these admirable goals the government plans among other things to increase life expectancy from the current average of 73.2 years to 74.6 years and to admit 70,000 new migrants.

With that the government recognises the role of migration in national security. However, the projected number of migrants appears to be rather modest. Meanwhile, national statistics agency Belstat recorded 28,349 migrants in 2015 alone.

The large number of migrants contributed to an increase in the overall population outweighing the negative results of high mortality rates. Whether this trend will continue or not remains to be seen, but it already means that Belarus has to learn to harness the power of migration.

Following the breakup of the Soviet Union, Belarus and Russia became the only two countries in the region to have positive migration inflows in the 2000s. In other words the number of arrivals exceeded that of departures. Belstat puts the number of international migrants at 28,349 in 2015. Out of these, 22,505 came from the Commonwealth of Independent States (CIS) or former Soviet Republics, and the remaining 5,844 from other countries. This brought the above mentioned positive migration inflow to a record high of 18,494 in the last decade.

Evidently the number of incoming migrants in Belarus peaked in 2015 due to the war breaking out in neighbouring Ukraine. However, state authorities like to attribute this increase not so much to the war as to the improving investment climate and economic attractiveness of Belarus.Ukrainians and migrants from other CIS countries adapt well to Belarusian society: they are white Caucasians, mostly Christian, and speak Russian. In other words, they integrate well.

However, in order for the migration ratio to remain positive, Belarusians need to want to stay in their own country. According to Belstat, 9,855 people permanently left Belarus in 2015. And yet, destination countries’ statistics paint a totally different picture.

1.3 million or 453,479 Belarusians resided abroad in 2014. They represent respectively 14.4 per cent or 4.8 per cent of the overall population of 9.5 million. The huge difference between the two estimates depends on whether migrants residing in Russia are counted according to their country of birth or citizenship respectively.

Ageing and depopulation pose major threats to Belarusian economic security. Migration may help alleviate some of the problems associated with it, but then it requires a special type of migrant, a labour migrant.

According to the Ministry of Interior data, 31,770 foreign citizens received employment in Belarus in 2015. And yet Belarus continues to struggle on this front. The problems include not only attracting qualified labour migrants and retaining them, but also providing them with long-term employment as opposed to one-off contracts. 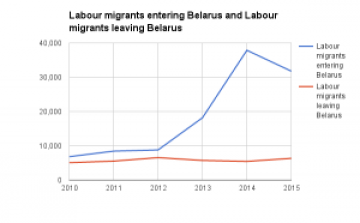 This number represents a decrease from the 37,868 foreigners registered to work in 2014. The Ministry of Interior attributes the decrease to “the stabilisation of the situation in South-Eastern Ukraine”. 14,045 Ukrainians applied and received official work authorizations in Belarus in 2015.

Workers from the CIS, China, and Turkey mostly find employment in manual jobs, while the far less numeorus highly skilled workers come predominantly from the neighbouring Baltic States. For now it seems Belarus has no competitive advantages in attracting and retaining high-skilled foreign labour. Neighbouring Poland is attempting to lure the young labour force, and recently introduced the so-called "card of the Pole". What Poland has to offer includes eventual access to other European countries and freedom of travel.

Maybe Belarus should focus on retaining its own talents instead. The Ministry of Interior registers the outflow of labour migrants but only those who choose to provide signed employment contracts. In the past year, 6,328 citizens submitted such information to the Department of Migration, the bulk of these 5,359 travelled to work in Russia. Certainly nothing prevents people from leaving Belarus in search of employment abroad on their own without registering either in their home or destination country. 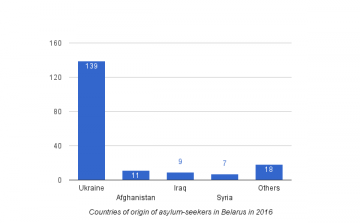 While Europe struggles with thousands of refugees and migrants from Syria and the rest of the Middle East, Belarus remains a country of transit. A total of three Syrian families with 6 adults and 8 children resettled to Belarus in 2015. They found their new home in Homyel.

Since 1997 Belarus has granted refugee status to 910 people from 19 countries according to the UN Refugee Agency (UNHCR). 2015 saw an increase in the number of asylum seekers, again most of them from Ukraine.

The national programme appears out of touch with reality, at least in terms of the migration component. If the Belarusian authorities do nothing, 70,000 new migrants are likely to arrive in Belarus in the next five years. The ultimate goals should include attracting a highly skilled labour force and retaining native talents. Respective legislation adjustments, economic reforms and promising investment opportunities could improve Belarus' image for younger, highly skilled labour migrants.

Meanwhile Belarus remains a highly homogenous urban society with almost 84 per cent of the population identifying as Belarusian, followed by 8.3 per cent identifying as Russian. The current population of Belarus totals roughly 9.5 million. The migration trends described above will hardly reverse that in the coming years. Few refugees from the Middle East or Asia regard it as a country of destination. Unfortunately, even fewer highly skilled labour migrants view Belarus as a viable option for work and living.

The 2016 Belarusian People’s Congress: the Illusion of Democracy 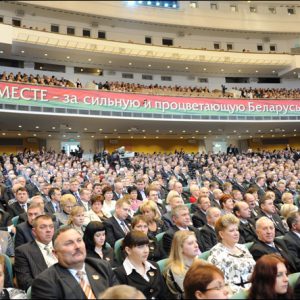 The Fifth Belarusian People's Congress will take place in Minsk on 22-23 June. The event will bring together 2,500 carefully selected participants from all over the country representing the branches of the government, industry and business, science, health and culture.

This Soviet-styled Belarusian institution is President Alexander Lukashenka’s preferred means of communicating with the electorate. The president convened the first Congress in 1996 to rally support for a constitutional amendment that would strengthen the powers of the executive. Over time, this institution has become the centrepiece of presidential election campaigns.

At this year's Congress, the president promised to present a strategy on how to overcome the economic crisis. Lukashenka may be hoping to use Congress as an opportunity to improve his public image. However, the Congress seems to have lost its charm with most Belarusians. Few will take the president's promises seriously this time around.

The origins of the People's Congress

The People's Congress, despite an awe-inspiring name, has little to do with real decision-making. Its main purpose is to help the regime to communicate its policies to the Belarusian public. In fact, the constitution doe not even mention the Congress.

Lukashenka convened the first People's Congress in 1996, on the eve of the referendum on the expansion of presidential powers. Having the constitutional amendments approved by the People’s Congress prior to the referendum helped Lukashenka to override the objections of parliament and the Constitutional Court. Not surprisingly, the president has hailed the Congress as “the highest form of the Belarusian democracy.”

The 1996 Congress gathered five thousand people from different parts of Belarus. Subsequent events brought only half as many delegates. As part of the nomination of Congress participants, the government elects loyal representatives of all professions. At the end of each Congress, these people rubber-stamp the president's five-year program.

The Belarusian People's Congress played an important role in Lukashenka's electoral campaigns in 2001, 2006 and 2010. On each occasion, the president gave a long speech in front of the delegates. The speech typically summarised the events of the previous five years and outlined the priorities for the following five years. Lukashenka’s speech at the 2010 Congress lasted more than three hours. 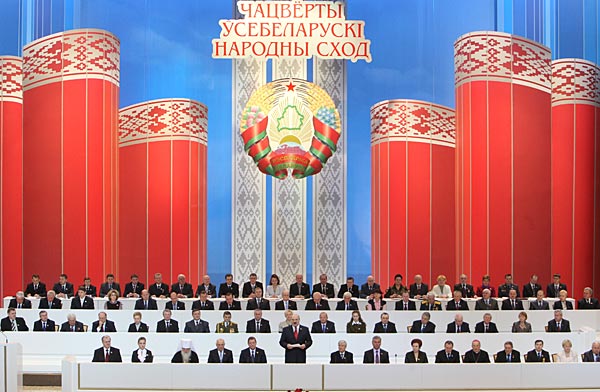 What is the point of the People’s Congress?

This time Lukashenka broke with tradition by waiting to convene the People's Congress until after the presidential election. One possible reason is his reluctance to discuss the dire state of the Belarusian economy before the votes were cast and counted.

First, convening the Congress this year will allow the president to convince the public that holding the Congress in 2016 rather than 2015 has nothing to do with his policy failures, but rather the authorities decided to postpone the People's Congress on technical grounds.

Second, the president may be reluctant to break the tradition of holding Congresses. Lukashenka himself may be “mentally imprisoned by Soviet rituals," as political analyst Alexander Klaskouski argues.

Third, the Belarusian People's Congress will help rally support for the president. In the presence of several thousand people and in front of the whole country on television, the president will try to shift the blame for the crisis onto the government. In fact, Lukashenka enjoys public speaking. Oratorical talent helped him to win the first (and last) democratic election in 1994, and even though elections are no longer free and fair, regular speaking engagements remain important for maintaining his approval rating. 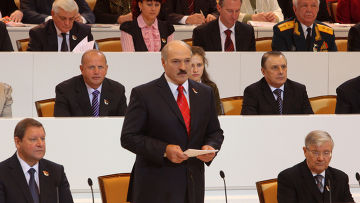 Two and a half thousand delegates will attend the Congress in June, and the authorities are trying to prepare for the meeting. State media has issued grandiose proclamations in anticipation of the event. For instance, the Belarusian Telegraph Agency wrote that “the People's Assembly will give a new impetus to the development of the country”, that “the current five-year plan will focus on improving the living standards of the nation”, and that "the central idea of the Belarusian People's Congress is the people's unity."

What to watch for at the next Congress

On 26 April, Lukashenka promised to present the Congress with "a realistic program for future activities that will serve as a guide for society."

The previously announced programmes, including Lukashenka’s 2015 electoral platform, have already partly failed. For instance, the platform promised that the government would not introduce any new taxes over the next five years, but the authorities have reneged on this and already passed several laws introducing new taxes.

The president’s approval rating is falling together with Belarus’s economy. According to official figures, the economy declined by 3.6 per cent in the first quarter of 2016 and according to the Independent Institute of Socio-Economic and Political Studies, 47 per cent of Belarusians blame the country's leader for the crisis. So, Lukashenka may hope that his next Congress performance will make the people more optimistic about the future.

Lukashenka will not be the only dignitary to speak at the next Congress. Other officials invited to speak at the Congress will be those who hold some influence within the bureaucracy. The anti-reform and pro-reform camps remain in conflict and the time allotted to speakers from each of these two opposing camps will show which group Lukashenka favours.

The Belarusian People's Congress remains in stark contrast with the Belarusian National Congress organised by several opposition groups. Pro-democratic forces organise their event almost without funds and are still facing problems finding an appropriate venue for the Congress, although it is scheduled to take place on 14-15 May. As former political prisoner Mikalai Statkevich recently stated, the Congress can even be held in the park. At the same time, the authorities spend sufficient money to organise their event.

But one thing unites both Assemblies. Although they use such titles as People's or National, few ordinary people take such words seriously. As Aliaksandr Klaskouski recently stated, the Belarusian authorities, the opposition and people live in parallel realities.