Belarusian authorities create problems for opposition activists who are crossing Belarusian borders. Isolation of the country is increasing. Following the departure of EU ambassadors, the IMF decided not to have any resident representative in Belarus and the country's representatives... 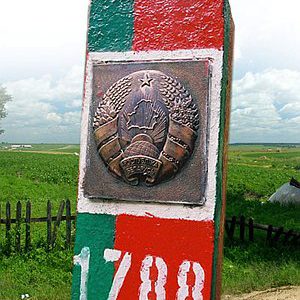 Belarus-Russia Relations: Between Equilibrium and Anschluss 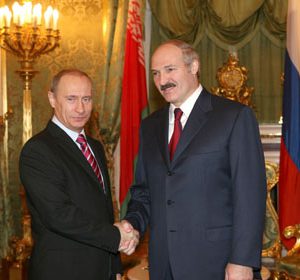 Today Lukashenka is taking part in the Interstate Council of the Eurasian Economic Community in Moscow to "give new momentum to the integration processes." With no EU ambassadors in Minsk, relations between Belarus and Western nations are at their lowest point in the country's independent history. The Belarusian government is increasingly relying on Moscow in its new conflict with the EU.

In February, Lukashenka and Medvedev issued a joint statement that Western economic pressure on Belarus is unacceptable. Last Sunday, the Russian Foreign Ministry declared that sanctions against Belarus threatened  the economic security not only of Belarus but also the entire Customs Union, including Russia. It is no wonder then that for the first time in years a top functionary of the Belarusian regime talked about the introduction of the Russian rouble in Belarus. Has Lukashenka lost the equilibrium between the West and Russia?

Belarus as Dependant on Russia as Ever

Polish expert Wojciech Borodzicz-Smoliński believes that recalling ambassadors and cutting staff in embassies in the long run may cause a fatal reshaping of the EU policy towards Belarus. He argues that the EU nations may lower the level of their representation in Minsk, because they can develop economic relations through trade missions. Dealing with the remaining few political aspects could be delegated to EU embassies in Moscow. After all, Moscow will increasingly control decision-making as a result of integration between the two nations.

According to the Polish analyst, European nations can adopt an uncompromising policy towards Lukashenka, especially because they understand that they have no leverage to change the situation in Belarus. The EU will have even less opportunities to influence the country as Belarus will get closer to Russia, effectively losing its sovereignty. Belarus can preserve only the formal attributes of independence – like its own president, parliament, army, passports etc.

But to understand whether Belarus is losing its independence it is useful to compare, in a detached fashion, the situation now and, say, ten years ago. Economically, Belarus still depends on Russia for subsidised oil and gas supplies, raw materials and access to the markets as it did ten years ago. Yet Russia still does not control many assets of the Belarusian economy. Economic crises and international isolation has given Russia new opportunities and it finally bought the Belarusian gas transportation system. Skilled Belarusians go to Russia, which needs a labour force, and thus Belarusian enterprises are weakened and can be squeezed from the markets. However, it will have an impact on Belarusian domestic politics and not on its dependent status.

The situation has not dramatically changed in the area of foreign relations or defence either. The Belarusian regime has survived on Russian support since 1997. For the first time the United States and the European Union imposed a travel ban on the regime's top officials in 1998 when Lukashenka expelled Western diplomats from their residences. As for closeness to Russia, the regime has been entwined in the integration games since the very beginning. Militarily, Belarus depends on Russia in every regard – from equipment to training and strategy – and it has been so since 1991.

The threat to national independence lies mostly elsewhere. Russia supports economically weak and internationally isolated Lukashenka because he guards its interests. Lukashenka has one characteristic which makes him the perfect man for the Kremlin: his reputation in the West is so poor that he cannot desert Russia. Any other Belarusian president – even a very pro-Russian one – will not be so limited in his international manoeuvring. In other words, Lukashenka's main asset is his bad reputation.

This policy of Moscow is likely to continue despite occasional quarrels between the two countries.

Isolated in Europe, since 1996

The Belarusian leader demonstrates no wish to renounce his rule. National independence is, probably, a value for him only as far as it helps him to stay in power. Therefore, concerns about Belarusian independence and a possible gradual Anschluss by Russia have been legitimate issues in recent years. Lukashenka, however, is not willing to give away his possessions – including his country – so easily.

Alyaksei Pikulik and Dzyanis Melyantsou of the Belarusian Institute for Strategic Studies consider the recent diplomatic scandal as the regime's attempt to break out of the long-standing model of relations with Western countries. According to them, the Belarusian regime wants to demonstrate to the West that unlike Ukraine or Moldova, Belarus does not aspire to become a part of the EU. Therefore, Europeans are not supposed to impose any political demands on Minsk. The Belarusian regime wants to be treated as one a post-Soviet countries which has a very limited pragmatic agenda in its relations with Europe – like Uzbekistan or Azerbaijan.

The Belarusian ruler knows well how to play this game with the Russian leadership. He has been mastering his skills to survive despite the Kremlin's pressure since 1994. The regime's and the country's isolation have been ongoing since 1996, with only a brief period of relative engagement with the West in 2008-2010. The isolation has done no known damage to his rule while the collateral damage has included Belarusian exclusion from European processes and strengthening tyranny.

In this survival game Lukashenka has already given away some strategic assets, such as the gas pipelines that run through Belarus. They have finally been sold to Russia, although Russia had hoped to take them many years ago. Belarus, also with significant delay, put into effect an air defence agreement effectively giving Russia control over a part of the Belarusian military. But apparently Belarus itself does not need this part of its army that much and Russia is happy to pay generously for its military ambitions.

Lukashenka also secured very low prices for Russian gas and oil. While previously 1,000 cubic metres of Russian gas cost Belarus $263, now its price is just $166. Belarus can continue its profitable exports of oil products to Western Europe. Perhaps the present total score for the Belarusian regime looks bad — but there is no capitulation in sight.

Moscow hardly has a plan to annex Belarus. The Belarusian issue was absent in the Russian presidential elections. Putin has set forth a broader agenda on a Eurasia-wide scale through its Customs Union. That does not mean that Russia has no interest in controlling its Western neighbour.

Rather, Moscow wants to maintain the political status quo and increase its economic control over Belarus. Russian daily Kommersant quoted an anonymous Russian government official who said that the Russian government is very hopeful that the “crisis in relations [of Belarus] with the EU will increase Minsk's dependence on Moscow and accelerate the transition of key Belarusian economic assets to Russian structures.”

Lukashenka considers Belarus as his fief rather than a nation which once gave him a mandate to manage its affairs, a mandate which expired years ago. This attitude and his dependance make him a very suitable partner for the Kremlin. Lukashenka ensures that the Belarusian state remains fragile. It also ensures that Belarus cannot develop a serious partnership with the West.

Unfortunately, the West can do little to influence Lukashenka or his sponsors in Russia. It may be easier to change the Belarusian people through gradual engagement and patient work.