Viktar Lukashenka is a big enigma. The 36 year-old lieutenant-colonel and the oldest son of the current ruler is rumoured to be the next leader of Belarus.

Although Lukashenka has three sons, only Viktar acts as a political figure. Since... 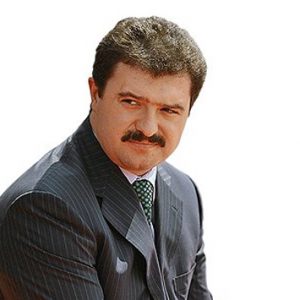 Viktar Lukashenka is a big enigma. The 36 year-old lieutenant-colonel and the oldest son of the current ruler is rumoured to be the next leader of Belarus.

Although Lukashenka has three sons, only Viktar acts as a political figure. Since Viktar became National Security Aide to his father, many analysts have come to explain every move inside the regime in terms of Viktar's influence.

On his trips to Arab countries Viktar Lukashenka meets future successors of Arab leaders as his counterparts. But his father does not intend to step down anytime soon. He is just 57 and has no evident health problems. Viktar may have to bide his time.

Grooming the Next President?

Viktar Lukashenka has been a successor in the making for many years. In the 1990s, he studied at the International Relations Department of the Belarus State University, the most prestigious school in Belarus. Already at that time, Viktar displayed his ambitions in a documentary made by NTV channel. When he and his younger brother Dzmitry were asked whether they could imagine replacing their father as president, Viktar said, "Why not?" Dzmitry replied with a firm "no."

After completing his studies, Viktar first served in the Border Guards. Viktar claims that he belonged to the special forces unit, but it is rumoured that he was assigned to the regular staff in Minsk. In a rare interview, he hinted at his participation in operations planning.

From the Border Guards, he switched to the Foreign Ministry, where he worked in 2001-03 in the Western Europe Department. From there, Viktar jumped into a new role as chief of the foreign department at Agat, a state-owned corporation that handles defence contracts for automated control systems.

In 2005, President Lukashenka appointed his 29 year-old son as his National Security Aide, a position created just for him. In 2007, Viktar joined the Security Council, a high-level organ of the regime. By that time he became involved in sensitive dealings. He regularly visited Libya, Oman, and some other Middle Eastern nations, meeting mostly top leadership and security officials.

Although Viktar kept a low profile, opponents of the regime started to publicly discuss Viktar as a prospective president after he became National Security Aide. Speaking to Le Monde in 2007, Lukashenka explained, "When I appointed my son to be my assistant, I wanted to open additional channels to get information. No head of state can have absolute trust in his followers, so my son helps me." 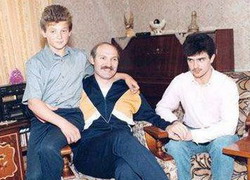 Viktar consolidated his power and promoted his confidants from the Border Guards and KGB Brest Section to influential positions. Lukashenka junior also played different government organs off against one another. He allied with the Internal Ministry against the KGB, which resulted in the appointment of Vadzim Zaytsau, Viktar's close friend, as new chief of the KGB.

Viktar then relied on the KGB while trying to overtake other agencies. In 2009, a former ally, Interior minister Uladzimir Naumau, was dismissed. Even so, the Interior remained beyond Viktar's control. Only in late 2011, after the arrest of the Deputy Internal Minister Yauhien Poludzien and dismissal of another Deputy Minister, one of them was replaced by a former KGB member and confidant of Viktar's. By that time, Viktar had already formed his own security agency – the Operative-Analytical Centre of the President.

The Operative-Analytical Centre focuses on surveillance in IT sphere but is also dealing with corruption and political dissent. It soon took measures to enforce control over the Internet. For instance, in 2010, the government adopted changes in Internet regulation prepared by the Centre. They caused negative reaction in the society. But the situation with Internet did not change significantly and repressive intentions of the new structure of Viktar Lukashenka have been largely exaggerated.

In September 2011, Lukashenka created the Investigative Committee – a new agency to take over the investigative functions of the Internal Ministry, the Public Prosecution Office, and the Committee of State Control. The move provoked a new wave of speculation that the president was looking to strengthen Viktar's position. But as political analyst Alyaksey Myadvietski has pointed out, there is little evidence of this, and indeed, “almost every significant change of officials in security agencies is explained now by Viktar's influence. 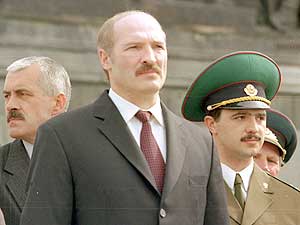 Is Viktar demonised? The Charter 97 web site believes that he was engaged in a crackdown on protests after the last presidential elections. Opposition activist Uladzimir Baradach has said that Viktar's "personal team" might be behind the terrorist attack in the Minsk subway. But again there are no facts to back up these claims.

Indeed, according to cables published by Wikileaks, US diplomat Jonathan Moore has characterised Viktar as adamant but attentive and polite after meeting him in 2008. In public, Viktar has been courteous and allowed the public to freely take pictures of him. In a 2008 document on the Border Guards, Viktar seemed to feel uneasy about all the attention he was getting.

For the time being, Lukashenka's oldest son seems too weak politically to run the country. He lacks his father's charisma, and has yet to prove his administrative abilities. However, in the post-Soviet space, the Azerbaijani precedent of power succession within one family suggests that Viktar's chances as successor should not be underestimated.

Hardly anyone believed that the current president of Azerbaijan would last even one year – Ilham Aliyev was known more for his casino exploits and embezzlement than for political achievements. But he succeeded.

Of course, Belarus is not Azerbaijan and has different traditions. Viktar also has one major weakness compared to Ilham – his lack of international recognition. Ilham served as Deputy Chairman of the Parliamentary Assembly of the Council of Europe before assuming office as president. Viktar's biggest international achievement so far was to land on the EU travel ban list.

Most probably, there is no succession plan at this point. Lukashenka is eager to retain power for as long as possible. He even jokes that his youngest son Mikalai – now seven years old – will be the president. Unlike Mikalai, however, Viktar grew up at a time when his father was not yet president. That makes him different from those dictators' children who have never seen the world without bodyguards. 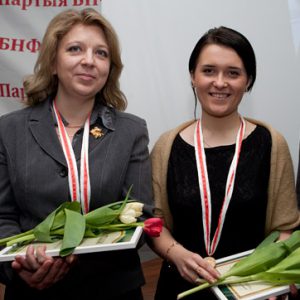 Svetlana Naumova awards. On 1 March, the awards ceremony named in honour of Svetlana Naumova, a prominent political scholar who passed away last year, took place in Minsk. The award was established by the civil campaign "Tell the Truth" and given in three categories – "Journalism", "Analytics" and "Hope." This year winners are Svetlana Kalinkina, chief editor of the Narodnaya Volya Valeria Kastsyuhova, editor of the website "Nashe mneniye", and Nasta Palazhanka, deputy chairwoman of the "Young Front".

National platform institutionalised. 34 Belarusian civil society organisations signed a Memorandum of Cooperation and became permanent members of EaP CSF National Platform. Now they have the opportunity to vote on the procedural and strategic issues of the National Platform. Among the signers there are Consortium "EuroBelarus", Ecodom, Legal Transformation Centre, Minsk Capital Union of Entrepreneurs and Employers, Association for Long-Life Education, Human Rights Center "Viasna", RADA, etc.

OEEC round table. On February 29, Office of European expertise and communication (OEEC) together with the Brussels-based "Office for Democratic Belarus" held a round table "European support for higher education in Belarus" in Minsk. The debate between the governmental bodies and NGOs has shown that there is no unity in the understanding of the principles of the Bologna process in the Belarusian academic community.

Hrodna Center "Third Sector" presents an educational program BY_HUB. On 17-18 March Hrodna hosts a training "How Internet technologies can help to achieve personal and organisational goals", which launches an educational program BY_HUB. The program invites to participation NGO representatives, journalists, bloggers who are interested in learning of modern communication technologies.

Assembly of business circles. On 29 February, Minsk hosted XIII Assembly of Business Circles of Belarus "To modernization – Together." The event was attended by businessmen and representatives of 46 business associations. The event was organised by Minsk Capital Union of Entrepreneurs and Employers, Republican Confederation of Entrepreneurship, with the support of the Council for Business Development. The Assembly adopted a draft "National Business Platform of Belarus – 2012" developed to facilitate improvement of business climate in the country.

The right on social responsibility. On 28 February, International Socio-Economic Foundation "Idea" conducted a talk show "1% Project: The Right to Social Responsibility". The talk show’s participants discussed the need for a law on social responsibility, and also got acquainted with the results of national research "Social Responsibility of the Modern Belarusian Business" commissioned by the Fund at the end of 2011. The talk-show, covered on the national television, was attended by representatives of business companies, NGOs, government agencies and journalists.

The chiefs of the colonies can be added to the EU blacklist. Non-profit institution Platforma declares that it will ask EU to include in a travel ban list representatives of prisons and detention centres, involved in torture or cruel, inhuman and degrading treatment against Belarusians.

Office for the Rights of People with Disabilities launches a No Barriers banner campaign.  On 1 March 2012 the Disability Rights Office launched a No Barriers banner campaign on four major Belarusian websites: tut.by, ej.by,naviny.by and interfax.by. The banners will appears on a daily basis on at least two of these website (rotating), except for weekends and holidays. Over the next month the total of four banners will call Belarusian citizens’ attention to mental and physical barriers, as well as issues that persons of disabilities are facing in employment and education.