This June the Ostrogorski Centre launched the Ostrogorski Academy – a nonprofit educational project dedicated to disseminating knowledge of the humanities. The academy is the first Belarusian entirely online 'university’, based on a series of lectures, tests, podcasts on...

Eugene Rumor, Carnegie Endowment, argues that post-2014 Belarus is a less reliable satellite for Russia and the West should calibrate its policy accordingly. Grigory Ioffe breaks down recent harsh statements by Dalia Grybauskaitė and Svetlana Aleksievich.

OSW: energy dispute between Minsk and Moscow is not completely resolved. Yauheni Preiherman believes that Belarus’ foreign policy cannot be grasped by the classic bandwagoning-balancing dichotomy.

Words matter: Belarus and its Western neighbors – Grigory Ioffe analyses recent harsh public statements made by Lithuanian President Dalia Grybauskaitė and Nobel Prize winner Svetlana Aleksievich. The author concludes that the government in Minsk has a better understanding than some of its Western neighbours that ongoing frustrations and regional grievances are perpetual nuisances in the overall European tug of war between the major global centres of power. 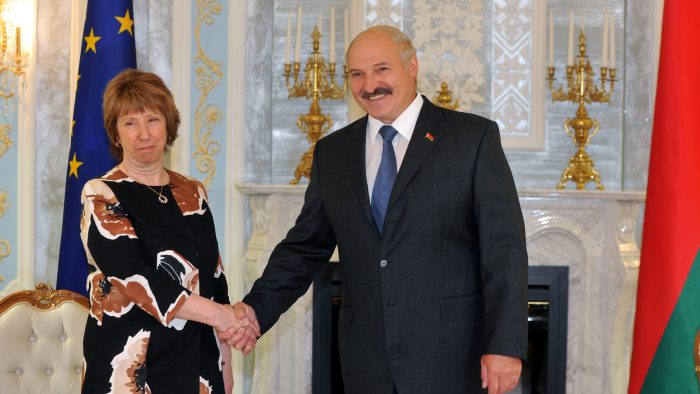 EU should put pressure on Belarus nuclear project – EUobserver argues that the Astraviec Nuclear Power Plant, built and financed by Russia, disregards international safety standards as it is so close to the population centre. Moreover, poor safety has already led to at least six incidents and several deaths at the construction site.

Toward a new European Union strategy for Belarus – Complications have tensed the relationship between the EU and Belarus, with some arguing for continued engagement with the autocratic regime of Alexander Lukashenka, and others calling for a return to isolation and excluding Belarus from the Eastern Partnership. E-International Relations argue that clarity about the end goal is critical for framing EU strategy towards the country.

Belarus’s asymmetric relations with Russia: the case of strategic hedging? – In his paper, Yauheni Preiherman argues that Belarus’ foreign policy cannot be grasped by the classic bandwagoning-balancing dichotomy. Under the conditions of deeply embedded geostrategic asymmetries and with a view to bypassing structural restrictions of its foreign policy, Belarus pursues strategic hedging, in particular in its relations with Russia.

Case of Amriev: Minsk has discredited itself in eyes of international community – Belarus in Focus experts, following the Murad Amriev extradition, note that Belarusian authorities are attempting to demonstrate to the Kremlin their reliability as a partner in sensitive issues. However, what seems quite reasonable in Minsk, may negatively affect the country’s reputation in the outer world.

Belarus: with friends like these… – Carnegie Endowment notes that since the breakdown of the post-Cold War security order and the rise in tensions between NATO and Russia, Belarus has occupied a prominent place as the critical territory between Russia and NATO. Although Russia has a strong influence in the region, its grip is less certain than often assumed.

The story that never ends. New stages in the energy dispute between Russia and Belarus – According to OSW experts, over the past few years, the situation in the area of energy cooperation of Russia and Belarus has become strained; Russia desires to optimise on their support for Belarus and the escalating recession in Belarus has forced them to apply for even more subsidies.

Belarusian Yearbook 2016 – This is an annual comprehensive analysis of the key developments and current status of the main sectors of the state and society in 2016. Three processes determined the political agenda last year – the presidential election, normalisation of Belarus’s relations with the West, and the economic recession. The presentation of the Yearbook was held in Minsk, on 23 June.

Belarus’s quest for self-identity aided by outside actors – Grigory Ioffe discusses the events that prove that a clear identity for Belarus as a nation is on its way to realisation. The Tell the Truth campaign was officially registered after 7 attempts. A debate over the Belarusian language has resumed. Lastly, Belarus came under renewed attacks by voices in both Russia and the West, but Belarus was able to perceive themselves as a unique and confident nation.

Lukashenka reformed the political system so that nothing changes. Journalist Paŭliuk Bykoŭski argues that modernisation of the Belarusian political system is not present, although some micro-movements may be seen. There is a debate over whether or not any new political systems will arise.

Andrej Vardamacki: media situation may change within a month – In mid-May, the Belarusian Analytical Workshop presented the results of the latest national poll. Andrej Vardamacki tells Thinktanks.by what is behind a sensational surge of confidence to non-state media (from 19.4% in February to 30.4% in April), explains what topics journalists should cover and what geopolitical infantilism is.

Belarus’ civil society: current status and conditions of development – Centre for European Transformation (CET) presents an analytical overview that summarises data of sociological and sectoral studies of 2014-2017 related to the Belarusian CSOs. The study covers such issues as statistics of CSOs, areas of activity, geographical distribution, public participation, as well as certain political, legal and financial conditions.

Population 50+ in Belarus: the experience of using the instruments of social harmonisation in the EU – The first part of the working paper describes the demographic changes and challenges in the world, sets basic indicators reflecting ageing of the population, as well as it reviews relevant literature available for Belarus. The second part analyses the demographic situation in Belarus and assesses the risks for the 50+ group to fall into the poverty line, become unemployed and the influence of age on alcohol consumption.