Protesters in rural Belarus took the authorities by surprise

18 August 2020
On 9 August, the day of the presidential elections, soon after the polling stations closed, protesters began to take to the streets of Belarusian cities. The rallies of thousands continued throughout the country in the following days. The authorities’... 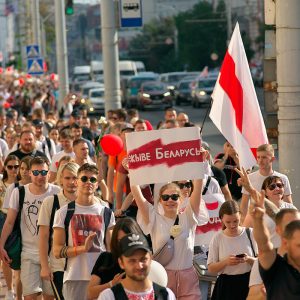 On 9 August, the day of the presidential elections, soon after the polling stations closed, protesters began to take to the streets of Belarusian cities. The rallies of thousands continued throughout the country in the following days. The authorities’ attempts to severely suppress the movements only resulted in increased protests.

An unusual feature of these protests is that they are not confined to the capital Minsk, but rather spread nationwide.  A total of least 33 cities and regional centres have seen protest activity. This demonstrates growing pressure on President Alexander Lukashenka, who has traditionally counted on the support of the population living in rural areas.

How the rural electorate began to speak up

The first catalyst for protests in the regions was Gomel-based blogger Sergei Tikhanovsky, who created the Youtube channel “The Country for Life”. The channel gave a voice to people from rural areas, who via the channel were able to talk about their problems, highlighting the economic and social failures of the state.

In one video, which received 1.3m views, a woman from the town of Hlubokae told viewers about life in her hometown, and expressed her negative attitude towards Lukashenka and his ignorance about the coronavirus pandemic.

If previously it was mainly opposition leaders who spoke publicly about the illegitimacy of the regime and poor socio-economic conditions in Belarus’ provinces, Tikhanovsky’s channel let rural citizens talk to the public themselves.

Tikhanovsky planned to participate in the presidential elections, but was detained after a criminal case was opened against him. Nevertheless, his YouTube channel kept attracting followers, thus giving more rural citizens the courage to speak up and take to the streets. It also debunked the myth that the rural population is Lukashenka’s main electorate, showing their dissatisfaction with his politics and their desire for change.

Since election day, people have begun to gather in the main squares of most Belarusian cities, expressing their outrage at the preliminary results announced by the Central Election Commission.

Police have used brutal methods to disperse crowds. For instance, in Brest, the special police unit (OMON) used flash grenades, traumatic guns, and even opened live fire on protesters, who in return attempted to construct barricades. One protester in Brest was wounded with a bullet, and 847 people were detained. In Hrodna, police closed off the city centre, carried out mass arrests and used tear gas against the protesters. Similar incidents happened in other regional centres.

The massive protests in small towns have perhaps come as the biggest surprise to the authorities and police, who throughout the years have been trained to disperse protests mainly in central areas of Minsk. The protests in the cities of Baranavichy, Pinsk, Zhodzina, and Navapolatsk were unexpected, though that did not mean that they avoided a ruthless response by the police. For example, after several thousand people gathered at the executive committee building in Baranavichy, police responded by using flash grenades and tear gas. In nearly every town there were mass detentions, resulting in around 7,000 detainees nationwide, 600 of whom say they were beaten in detention centres, and 2 of whom died. One victim died in a hospital in the city of Gomel, reportedly due to harsh beating.

On 12 August women began taking to the streets of Minsk in solidarity chains. Women in other cities and towns started expressing solidarity with the repressed as well. Peaceful protests spread throughout the whole country, with people dressed in white holding flowers coming out to the streets and cars honking in solidarity.

In Hrodna, a few mass protests took place at the main square, where doctors, employees of large state enterprises dressed in uniforms, teachers and paratroopers gathered with posters and portraits of the victims of peaceful protests. A representative of one of the largest state enterprises, Grodno Azot, came out to the protesters to announce a strike.

Throughout the country, workers of industrial giants such as Belaruskali, Naftan, MTZ (Belarus Tractor), and BMZ (Belarus Steel Works) began actively expressing their position on the current events. Many of the workers of these rural-located enterprises held large-scale meetings with management, joined protesters, and declared strikes. Workers demand an end to violence and that police be brought to justice, recognition of the elections as illegitimate, the resignation of Lukashenka, and the release of political prisoners.

For example, on 14 August a spontaneous protest took place in Salihorsk at Belaruskali enterprise. At the meeting with management, people demanded the disbandment of the riot police (OMON), legal action against those who used brutality against protesters and detainees, and new presidential elections.

On 17 August, another wave of protests and strikes took place at enterprises, through which workers attempted to defend their civil rights. In Zhlobin, the workers of BMZ (Belarusian Steel Works) ceased production. Miners of Belaruskali announced they had stopped work at the mines. At other state enterprises, such as Grodno Azot, BELAZ in Zhodzina, and Naftan in Navapolatsk, workers put forward demands to management, warning they would suspend production if these demands were not met.

If the Belarusian authorities were prepared to respond to protest movements in Minsk, they did not expect to see such civic activity in the regional centres and rural areas. In Brest, the authorities went as far as to deploy border control officers and military forces to protect government buildings.

People first took to the streets expressing their dissatisfaction with the falsified elections, and thereafter with the suppression of protests and numerous detentions of protesters. They are fearlessly demonstrating their anger at police brutality. This shows that the point of no return has passed, as the majority of Belarusians no longer need to rely on state TV or other media sources to understand the scale of the protests in the country. Instead, they can observe and join the protesters on the streets of their own towns, expressing their demands to the local and state authorities. 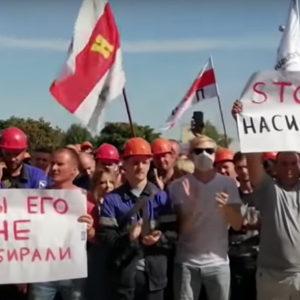 Belarus now witnesses the largest protests since the 1990s following rigged presidential elections. Hundreds of thousands of people in different parts of the country have been coming out to protest for many days, calling for the release of political prisoners and new elections.

Belarus Digest will publish here the most interesting materials, primarily videos about the most recent development in Belarus.

In Belarus, a Cultural Uprising is Also Under Way – VOA News

Dozens detained in Belarus after clashes with police – Global News

Belarus: personal stories from a country in turmoil – The Guardian

Bringing music to the front lines of the Belarus protests – CBSN

Belarus protests: How women stand up to Lukashenko – DW

Revolution in Belarus: We want to remain peaceful – Belsat

How much longer can the Belarusian president hold on? – Al Jazeera

Is a regime change possible in Belarus? – Al Jazeera

Protesters in Belarus Are Being Jailed and Killed, But That Isn’t Stopping Them – VICE News

Belarus protest: How is Lukashenko’s support outside Minsk? – DW News

Belarus protests: Protesters take to the streets of Minsk in defiance of military warning – Global News

The protesters beaten and tortured in Belarus – Sky News

Belarus’s election outcome not the ‘wish of the people’, EU says – ABC News

EU leaders do not recognize results of Belarus election – Euronews

China says it respects choices made by Belarusian people – CGTN

With all my respect to @DeutscheWelle, discussing #Belarus with experts from Moscow with Kremlin in the background is just wrong.

Belarus IS a different country and has plenty of people fluent in English to speak for themselves. #supportbelarus https://t.co/QdRqCjrVAk pic.twitter.com/LuYnAQf9hQ

Belarus president claims he is willing to share power – AlJazeera

The moment when workers start shoting ‘Go away!’ during Lukashenka’s speech

An unbelievable number of people protesting in Minsk, #Belarus. Look how disciplined the protesters are – they even wait for a green signal to cross the street! #supportbelarus https://t.co/6O5enR3xJq

Reports keep coming that several people have been tortured to death in Minsk detention centre. https://t.co/PY8nN5kEKe spoke to a mother of a 16-year old Timur. He is in coma, police tried to pluck out his eyes with the same batons they raped other people.https://t.co/UaABnLhST5

This is what the alleged 80% of support to the incumbent Lukashenka actually looks like: central #Minsk, #Belarus, now pic.twitter.com/ojInzGUjD4

Thousands attend the funeral of a Belarus protester – Sky News

Will the President of Belarus survive protests against his rule? – AlJazeera

Former president of #Belarus now asks Putin for help. Against whom? Against own people carrying flowers on the streets? It is really big foreign conspiracy to live in parallel world being ready to sacrifice everything.

Protesters in Belarus claim they were tortured while detained – Sky News

Belarus pays last respects to Alexander Taraikovsky, a man who was killed by the police on the second night of protests.#ЛукашенкоУходи #LukashenkoGoAway#Belarus pic.twitter.com/PrL3PE0EtI