The sixth time was different: a revolution unfolds in Belarus

Volha Charnysh 15 August 2020
Belarus stands before a critical chapter in its history. Following a rigged election in which the incumbent claimed an absurd 80% of the vote, thousands took to the streets demanding free and fair elections and an end to repression.... 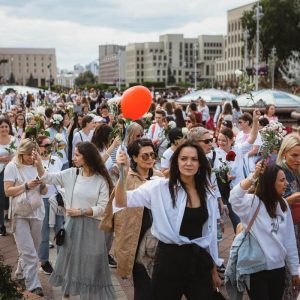 Belarus stands before a critical chapter in its history. Following a rigged election in which the incumbent claimed an absurd 80% of the vote, thousands took to the streets demanding free and fair elections and an end to repression. This is an unprecedented show of support for democratic values in a country that has experienced just one competitive election – in 1994, bringing President Alexander Lukashenka to power for the next twenty-six years.

The scale of the protests is remarkable given the risks Belarusians face: at least 6,700 were arrested after the election; at least two protesters were killed; gruesome stories of beatings during and after detention abound. The broad-based opposition is united in a desire for change. Their resolve only strengthened following an internet blackout and police brutality. Mass actions have spread to the smallest towns and villages and encompass diverse segments of society. Demonstrations remain orderly – protesters even pick up their trash.

Citizens coordinate via an encrypted Telegram channel NEXTA (meaning “somebody” in Belarusian), which currently has over 2 million subscribers. NEXTA announces main protest events, cheers on occasional defections from the regime side,  posts inspiring images and videos, and publicizes protesters’ horrific stories of torture and rape by the security forces. The channel is manned by a small team of professional journalists who do their best to verify stories and weed out “fake news” and, importantly, warn about provocations.

Dozens of state-owned factories are on strike, a remarkably effective strategy given the degree of state ownership in the economy. The size and strategic importance of the striking enterprises, which include Belaruskali, Belarusian Automobile Plant, Minsk Tractor Works, and many others, facilitate organisation and put workers directly in confrontation with the state. The workers are joined by doctors, teachers, artists, and transport workers. Even CEOs of Belarus’s top IT companies have called for an end to violence and new elections in an open letter. 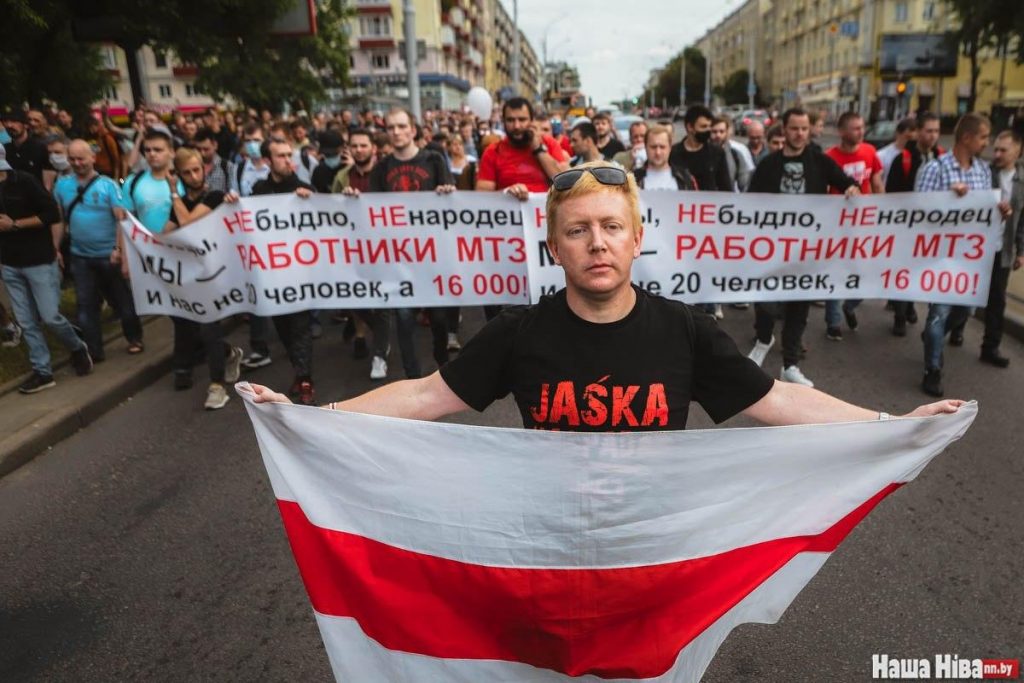 How Belarusian society has matured

The scale and the nature of civic mobilisation show how much Belarusian society has matured in the past decade. The majority of the population lives in urban areas (78%) and is connected to the Internet (79%). The regime dominates TV and print media, but Belarusians have access to other sources of information – not only in Russian and English-speaking media, but also in home-grown Telegram and YouTube channels that rely on user-generated content. Incomes have risen, enabling Belarusians to travel, work and study abroad. Belarus has an active 1.5 million diaspora, socialized in democratic states and ready to support mobilization in Belarus financially. A new generation, no longer moved by scary stories of the post-Soviet transition, has grown up. This well-educated and tech-savvy society can hardly be ruled by a corrupt and misogynistic 65-year-old president, who came into politics after managing a collective farm.

Belarusians honed their organisational skills in the face of Lukashenka’s inaction during the coronavirus epidemic. They organised innovative crowdfunding campaigns to provide medical workers with protective equipment; publicised the rising number of cases and authorities’ cover-up of the fatalities, and made informational videos about the virus. They self-isolated, wore masks, and worked from home voluntarily. They searched the internet to learn more about the virus, getting more and more convinced of Lukashenka’s incompetence. 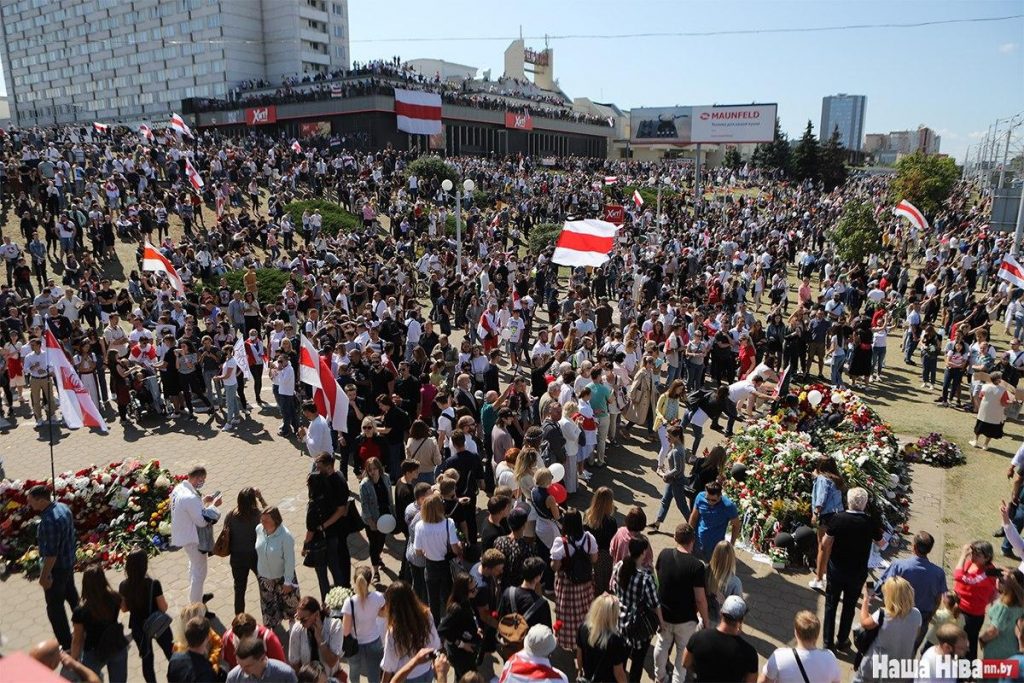 Minsk mourning the death of protester Alyaksandr Taraikovsky on 15 August

The solidarity and connections generated as a result of the epidemic soon expanded into the political sphere. Belarusians created not one but many online platforms to count votes independently and register electoral irregularities. Their ability to self-organise is illustrated by the success of the civic initiative, Honest People. The initiative was started by the campaign of Viktar Babaryka, whose presidential candidacy was foiled by the regime, but quickly evolved into an independent operation. The initiative urged voters to photograph their ballots and to report electoral irregularities on the online platforms Golos (translated as Voice).

Before the authorities shut down the internet on election day, 1.2 million out of 6.8 million eligible voters had registered their votes with Golos. Of these, just 1% were for Lukashenka, according to the intermediate results. The accounts of electoral falsification were also numerous, verified for a third out of 989 verified polling stations, in all of which Lukashenka claimed over 75% of the vote.

No more inevitability around Lukashenka

While no one doubted that every post-1994 was falsified, the precise scale of manipulation had always remained a mystery. With independent surveys banned and media controlled by the regime, Lukashenka managed to create an atmosphere of inevitability around his rule. Even the EU and the US grew tired of imposing sanctions and adopted a pragmatic policy vis-à-vis the Belarusian regime, particularly following Russia’s invasion of Ukraine.

This year, the West was distracted by the coronavirus epidemic, looming recession, and democratic backsliding in its own backyard. The changing mood in Belarus was easy to miss; civic activism on such a massive scale seemed improbable just a few months ago.

In fact, President Lukashenka himself seems to have underestimated the revolution unfolding before his very own eyes, possibly because he banned independent polling and surveys. He made one misstep after another, starting with mishandling the coronavirus epidemic and ending with uniting the historically fragmented opposition by repressing some serious challenges and underestimating another, Sviatlana Tsikhanouskaya. These mistakes proved decisive in turning latent mobilizational capacity of Belarusian society into street protests.

Women against the dictator

The authorities denied registration to blogger Sergei Tikhanousky and two other promising opposition candidates, Babaryka and Valery Tsepkalo, and arrested Tikhanovsky and Babaryka. Then their electoral campaigns united behind Sviatlana Tsikhanouskaya, who decided to register in her husband’s place. Registration allowed Tsikhanouskaya to hold sanctioned rallies and maintain the momentum of mobilisation in the run-up to the elections, despite the arrests of the most promising candidates.

A 37-year-old teacher of English turned stay-at-home mum, she was an opposition candidate unlike any other. Her campaign was immediately supported by two other women, Maria Kalesnikava, campaign manager for Babaryka, and Veronika Tsepkalo, wife of Valery Tsepkalo – he fled the country to protect their children. Competing against three women was terrible optics for Lukashenka, who is known for his misogynistic statements. The incumbent may have genuinely underestimated Tsikhanouskaya because of her gender, claiming that Belarusian society “was not mature enough to vote for a woman.” 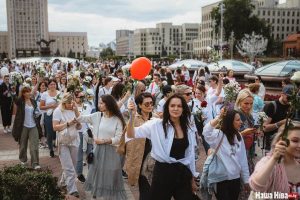 Women marching on the streets of Minsk, August 13

Tsikhanouskaya played up the traditional female image, claiming that she did not want to be president and preferred to be at home making cutlets for her family. She positioned herself as forced to stand up to the regime in order to support her spouse and to ensure a better future for her children, something many Belarusians could relate to. Her promise to hold another, free and fair election, if she won, united a broad range of groups across society. Her campaign lacked anti-Russian or nationalist rhetoric, which has divided the opposition and alienated some population groups in the past.

As a revolution unfolds in Belarus, it is difficult to predict what the country will be like in a few months. Streets can remain full for only so long, and Lukashenka still remains in power. Belarus is in a union state with Russia and remains geopolitically important for Russian president Vladimir Putin, who may be tempted to take advantage of the instability. The success of a bottom-up protest movement in unseating the incumbent would be unsettling for Moscow, given the unrest in its eastern regions.

It is clear that Belarus’s political system and society will not look the same when the dust settles. People have gained crucial organisational skills and motivation to stand up for their dignity. Belarus also has many of the structural preconditions for democracy, including the educated, homogeneous, and relatively well-off population. At the same time, Lukashenka has all the incentives and tools necessary to rule by force. Now is the time to show solidarity with Belarusians who are risking their lives to live in a more democratic country. 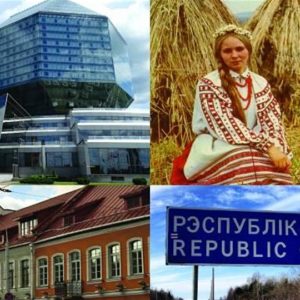 UCL School of Slavonic and East European Studies, the Ostrogorski Centre and the Francis Skaryna Belarusian Library and Museum invites to the Annual London conference on Belarusian Studies.

The conference will take place on 21–22 February 2020 at the School of Slavonic and East European Studies (SSEES) and the Francis Skaryna Belarusian Library and Museum in London. The conference reception is sponsored by the Anglo-Belarusian Society.

The conference serves as a multidisciplinary forum of Belarusian studies in the West and offers a rare networking opportunity for researchers of Belarus. The draft programme of the conference is available here.

This year’s Annual London Lecture on Belarusian Studies will be delivered by Professor Thomas Bohn from Justus-Liebig-Universität Gießen, Germany. The title is ‘Bagpipe Player and Painted Birds. Belarusian Histories of the People in the Marshes.’

The speakers and moderators include:

For more information and to register, please go to Eventbrite.