Russian Airbase in Belarus: A Long Story With No End in Sight? 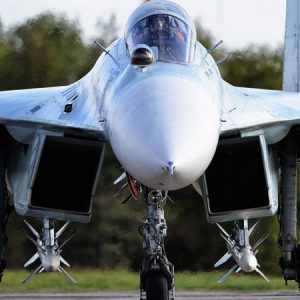 The Financial Times noted that "Russia is moving ahead with plans to establish a military air base in Belarus." Yet Moscow still needs to hammer out a deal with Minsk.

While the airbase does not change the regional military balance, it changes the relationship between Belarus and Russia. Minsk risks losing leverage over Moscow and will no longer look as a neutral party in the Russia-Ukraine conflict.

Minsk tries to delay the deal on the airbase and to change its terms. So far Moscow has only two technical facilities in Belarus, and the joint Belarus-Russian air defence system was only established after many years of delays and Russia having to take Minsk's demands into account.

Some Time, Somewhere, Something…

On 2 September the Russian government sent President Putin a draft agreement on the Russian airbase in Belarus.The week after, the draft was published. However, it left out some significant details. These include the location of the base and which military units are to be deployed there. Previously the two sides had only discussed stationing a regiment of heavy fighter jets near the Eastern Belarusian city of Babruysk.

Asked when the agreement would be signed earlier this month, Russian Prime Minister Medvedev said that the signing “should be comfortable for both the Belarusian and Russian sides.” This could prove difficult. Minsk does all it can to avoid signing the agreement at a sensitive time of confrontation in Ukraine. An airbase agreement would ally it closer to Russia and strip it of much of its foreign policy autonomy.

Moscow however is determined to integrate Belarus closer. It is tired of Minsk's refusal to support the Kremlin's policies in the former Soviet Union and of Lukashenka's deals with the West. So Moscow tries to place the Belarusian president in a bind, or as Foreign Policy put it, "Putin clips Lukashenko’s wings with air base in Belarus."

No Change in Regional Military Balance

Dmitry Medvedev claimed that idea of establishing an airbase in Belarus began in 2009. “Back then we signed the documents on the joint protection of the borders of Belarus and Russia and the joint air defence system. In fact, the agreement [on the airbase] implements those agreements.”

That is an exaggeration. Those documents say nothing about a permanent Russian base in Belarus. Moscow decided to enhance its military presence in Belarus only in early 2013. In April 2013, it publicly announced plans to station its own airforce in the country. Back then, revealed details of official talks and expert comments indicated that the reason for such plans was the weakened Belarusian airforce.

Indeed, by that time Moscow had doubts about Minsk's ability to protect the joint air border as agreed. Minsk which had inherited an impressive fleet of Soviet state-of-the-art military aircraft did not buy newer planes after independence.

The situation with obsolete Belarusian aircraft worsened in the 2010s because of financial constraints. By that time Minsk had no functioning heavy Sukhoi fighter jets at all. Earlier, in the mid-2000s, the Belarusian government due to a lack of funds had halted the modernisation programme of MiG-29 light fighter jets for ten years. This programme started again only in late 2013 after Minsk realised that Russia would not give it newer aircraft.

Now Russia is going to send its fighter jets to Belarus. In terms of the regional military balance it means return to the situation of a decade ago. Back then Minsk still had a regiment of Sukhoi heavy fighter jets. Now Russia wishes to send its own regiment (of the same modernised Sukhoi airplanes) to Belarus.

Nevertheless, in the current tense atmosphere of Eastern Europe, Minsk will anyway face a possible backlash over the possible establishment of a Russian airbase. On Tuesday, Lithuanian Defence Minister Juozas Olekas warned that a prospective Russian airbase in Belarus would harm Minsk's relations with Lithuania, the EU and NATO.

How to Destabilise the Country?

The base will dramatically change relations between Belarus and Russia. It is, however, unlikely to create a threat of the “Crimea Scenario.” One regiment of fighter jets lacks any means to prepare a Crimean-style intervention. In addition, according to the draft agreement the regiment shall be a part of the Single System of Air Defence between Belarus and Russia, hence Russian planes cannot operate without Minsk's consent.

But something more terrible than a “Crimean Scenario” threatens Minsk. Belarus is losing its military value for Moscow. Earlier, Minsk could boast of its protecting Moscow and ask for money. Now, Moscow is going to provide its security itself, without its Belarusian ally.

The Belarusian government loses a major bargaining chip in negotiations with Moscow. In the future, for its financial support the Kremlin can demand from Minsk more assets and concessions. It already started to do so in the case of the airbase.

According to the military analyst Alexander Alesin, it was not a coincidence that Russia published the draft agreement on the airbase just as the Russia-controlled Eurasian Stabilisation and Growth Fund announced a possible loan for Belarus until the end of this year.

Of course, not everything is about money. Belarusian politician Yuras' Hubarevich insists, "Russian leaders indirectly help Lukashenka get reelected. The airbase is a payment which the existing regime owes Russia for the right to keep dominating and ruling our territory."

Meanwhile, Minsk faces another related problem too. Moscow wants Lukashenka to renounce his policy of seeking balance or even a neutral position in relations with Russia, Ukraine and western states.

Clearly siding with any side in the current confrontation between Russia, Ukraine and the West will mean for the Belarusian state reduced opportunities for foreign policy manuevering, further deterioration of foreign trade and increasing loss of international legitimacy. It potentially also means possible destabilisation inside the country too.

The government understands the risks and tries to postpone and reshape the airbase agreement. After all, it succeeded in postponing for years the establishment of the Single System of Air Defence between Belarus and Russia and managed to make it more convenient for Belarus.

The agreement on the airbase was also prepared already by October 2013 yet Minsk successfully procrastinated on it. The end of the airbase story remains uncertain, because Belarus' relations with the West are improving, resulting in the diminishing of Russia's opportunities to put pressure on Minsk.

Belarusian Milk Exports: Success in the East, Failure in the West 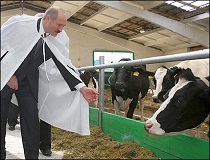 On 17 September, Alexander Lukashenka publicly explained to Vladimir Putin the process of milk production and to Nursultan Nazarbayev the functioning of the market economy. In this way the Belarusian state leader responded to critics who have questioned the quality of Belarusian milk.

Milk in Belarus plays a significant role in the economy, as the country ranks at 5th in the world milk market, and the President's Property Administration owns several dairy plants.

Belarus tries to enter the European Union and other markets, but it still has problems with obtaining the necessary quality certificates.

It seems that nowhere else in the world do government elites have such close connections to the dairy industry as they do in Belarus. The President's Property Administration owns the largest Belarusian agricultural complex "Machulishchy," which is the biggest milk producer in Eastern Europe.

The rapid growth of the agricultural complex began in 2013, when Viktar Sheiman, often called the last soldier of Lukashenka, became the head of the President's Property Administration, the biggest state-owned business empire and the financial backbone of Lukashenka's regime.

According to estimates of the Belarusian web-site Ej.by, the Machulishchy conglomerate now produces more than 300 thousand tonnes of milk a year. This is twice the amount produced by the main producer in the Russian market, and three times the amount of the main producer in the Ukrainian market. The large scale of milk production in Belarus becomes more significant when considering that Belarus is a much smaller than Russia or Ukraine.

Milk production remains one of the biggest priorities for agriculture. Over 10 years Belarus increased its milk production from 4 to 6.5 million tonnes, and now it ranks fifth in the global trade of milk with 4% of the market. However, the export of milk has almost only one direction, which is to Russia.

Officials say that the government remains reluctant to subsidise the production of milk, like other sectors of agriculture. Although in practise, they do not deny that they have issued large loans for the modernisation of the dairy industry. As Andrej Jurkou, an expert in the field, says, "nobody knows how much budget money went to pay off the interest rates.”

Despite the traditional protectionism in agriculture, the Belarusian authorities allow businessmen to have shares in the dairy market. Currently, private entrepreneur Yauhen​ Baskin owns the largest farm for cows in Belarus. Milk producer "Savushkin pradukt" remains one of the most efficient dairy companies and remains the most trusted brand in the industry. It belongs to Alexander Mashensky, a businessman closely affiliated with the government. This shows that the Belarusian government sees a strategic development sector not only for themselves, but for the country at large.

Problems in the East

Dairy products are important for the Belarusian authorities. That’s why Alexander Lukashenka took criticism of the Belarusian milk at the Forum of Regions of Russia and Belarus so personally. On September 17 at a panel discussion with Vladimir Putin Lukashnka told Nursultan Nazarbayev, Kazakhstan's president off, when he said that Belarusian milk is not actual milk, but rather a ‘milk-drink.’

Lukashenka described the process of milk production in detail and stated that “Nazarbayev as a free market promoter should understand that if Kazakh consumers buy such milk, Belarus would deliver it to them.”

Lukashenka directed his answer primarily towards Kazakhstan, while Belarus also has had problems on the Russian market for a long time. In 2009, Kremlin temporarily banned Belarusian milk deliveries. Lukashenka won by promising to return customs controls on the Belarusian-Russian border and he refused to participate in the summit of the Collective Security Treaty Organisation. That conflict received the name the ‘milk war.’

Then Alexander Lukashenkа accused Russia that it wants to privatise a number of Belarusian dairy producers. But, according to him, Lukashenka said to the Russian government "goodbye, we will die, while drinking this milk, but the Kremlin will never put the question of privatisation in this way."

Later, in 2010 the Kremlin once again for a short time period imposed restrictions on the import of Belarusian dairy products. In 2014 Russian Prime Minister Dmitri Medvedev threatened Belarus with an anti-dumping investigation of potential subsidies in the dairy industry. So, milk always remains the focus of elites in Russia and Belarus.

Belarus Tears Open a Window to the World

The Milk war in 2009 forced Belarusian producers to think about other possibilities for milk export. Since that time, many Belarusian entrepreneurs have attempted to acquire the appropriate quality certificates to enter the European Union market.

Export possibilities of Belarusian dairy to other countries, besides the EU and the Eurasian Economic Union remain nonexistent, while New Zealand, the European Union, the United States and Australia confidently hold the lead in their markets.

Thus, Belarusian milk manufacturers have problems with the stable eastern markets, but at the same time they are incapable of solving their product quality issues. This situation blocks any possibility for fully fledged cooperation with the West and other countries. Belarusian milk in many ways resembles the general trajectory of Belarusian foreign policy.