On 14 April, the Belarusian Institute for Strategic Studies published a new issue of its Political Mediabarometer.  Pavel Sieviaryniec, co-chairman of the Belarusian Christian Democrats, is now the new leader in terms of media presence in Belarus.

On 14 April, the Belarusian Institute for Strategic Studies published a new issue of its Political Mediabarometer.  Pavel Sieviaryniec, co-chairman of the Belarusian Christian Democrats, is now the new leader in terms of media presence in Belarus.

Sieviaryniec' success demonstrates emergence of a new generation of Belarusian opposition. Zmicier Dashkevich of the Young Front and Aliaksei Yanukevich of the Party of the Belarusian Popular Front also faired well in the study.

Preparations for local elections attracted little attention in the media, while the number of references to the opposition discussing bread and butter issues decreased from 10% to 8%.

The opposition remains reactionary, not proactive, with their messages to the public. Mainly they spread information related to releasing political prisoners, celebrating the 25th anniversary of the Belarusian Popular Front or their own organisation congresses. Despite this trend, the volume of proactive communication that opposition politicians themselves have initiated has increased.

BISS`s research shows that Paviel Sieviarynec has become the most prominent member of the opposition in the Belarusian media. His release and rapid ascent into the political arena has, in large part, contributed to this phenomenon.

Uladzimir Niakliajeu slipped to second in the rankings, although he remains the most popular opposition politician in Belarus. According to the Independent Institute of Socio-Economic and Political Studies (IISEPS) his rating is holding steady at 7.1%. Niakliajeu, Alexander Milinkevich and their deputies will primarily decide who will challenge Lukashenka in the coming presidential elections in 2015.

During the period studied, Anatol Liabiedzka from the United Civic Party published a book. The 25th anniversary of the Belarusian Popular Front helped Aliaksei Yanukevich, the party`s leader, to stick around the top of the rankings. Zmicier Dashkevich, leader of the Young Front, took fourth place largely thanks to his organisation's active congress.

The number of references of females politicians declined from 16% to 9%. Maryna Adamovich, wife of Mikalai Statkevich, remains popular in the media, but this is largely due to the fact that acts a conduit who transmits news about her husband (who remains in prison). The number of references to Anastasia Dashkevich after her husband's release has declined, although she remains a prominent member of the Tell the Truth campaign.

The ratings for political organisations in the media is very similar to the ranking of individual politicians. For the first ranking, the study assessed the media presence of coalitions. According to their research, Narodny Referendum (People's Referendum) had much better results than Talaka.

This ishappened because of the growth of its offline activity, proactive communication and the variety of politicians that represent the coalition. The focus of each coalition differs. Narodny referendum focuses on bread and butter issues and Talaka on the demand to hold free elections.

However, this activity rarely deals with the lives of ordinary people. The 11% growth in the sheer number of mentions of ordinary opposition organisations members is evidence that there is an awakening occurring amongst democratic forces.

BISS analysts have defined the four catalysts of political communication during this period as: the release of Sieviaryniec, the 25th anniversary of the Belarusian Popular Front, the anniversary of the 2010 presidential elections and the events in Ukraine.

59% of the references found were from online resources, with 31% of those references having retained party information within their content. The significance of Facebook has also grown, according to the study, although the study did not cover vk.com – a Russian-language social network and perhaps the most popular social network and overall web site in Belarus.

Preparations for local elections was all but invisible in the media. Objectively, the opposition did little in the way of making this issue front page news. Public issues like prison releases, deaths or religious holidays were the most popular topics of the opposition.

The topic of repression will likely remain at the top of these rankings as long as they exist. International relations' relevance spiked upwards due to the events in Ukraine. The economy has slid to eighth place, though this might be in part due to the fact that the opposition raises these issues primarily as coalitions.

Despite the stereotypes, the opposition's media presence in almost half of the cases analysed were associated with more practical work. The study's authors wrote that public events, policy implementation or meetings with foreign politicians were the opposition's principal activity.

Opposition Awakening Before the Presidential Elections?

Reports such as these would seem to suggest that the opposition has awakened after a period of slumber. While their actions do not usually go beyond the "opposition ghetto", as people say in Belarus, the growth in the number of references and the appearance of a new popular leader in the media appear to indicate a period of intense political activity.

Seviarynec will continue to occupy to the upper end in the rankings. He will likely try to play the role of an opposition coalition builder as well as a coordinator of the process for selecting candidates for the presidential elections. Seviarynec himself cannot stand as a candidate due to his recent imprisonment and his party has no viable alternative.

His colleague from the Belarusian Christian Democrats, Vital Rymasheuski, lacks credibility in the eyes of other opposition politicians which means that Seviarynec's party does not have a contender in the upcoming elections.

A growing number of young politicians are coming into their own. Unlike their older colleagues, individuals like Sieviaryniec, Dashkievich, Hubarevich, Dzmitryjeu, Lahviniec, Yanukevich rose to prominence 10 or even 15 years ago, after Lukashenka came to power.  A generational overturn is gradually unfolding in Belarus. 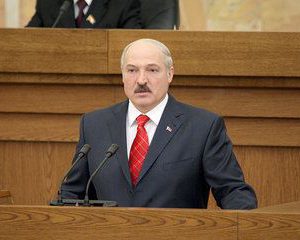 He called on Belarusians to unite in the face of external threats and demanded the punishment of those who speculate on the rights of Russians in Belarus. He devoted most of his time to discussing corruption and suggested economic reforms as a means of taming corruption and improving the nation's economic performance.

In closing out his address, Lukashenka declared a rather tough position on the ongoing Eurasian integration project.

Aliaksandr Lukashenka began his annual address in quite an alarming way. He called on the nation to unite in protecting its independence in the face of instability in Eastern Europe.

“I am addressing you in difficult times. The surrounding states have gone into motion: Ukraine is boiling, the Russian Federation is trying to elevate its overall historical status. State borders are being shifted in front of our eyes. […] We must defend our most precious value – the independence of Belarus”, said Lukashenka.

He added that Belarus remains calm and uninvolved in any external conflicts. However, “we have reasons to worry”. He did not specify those reasons but offered three components for preserving the country’s independence:

The proposal to affirm national unity sounded most unusual. Lukashenka, of course, never argued for a national split but his policies regularly exclude any kind of compromise with the opposition. This time, however, he emphasised the need for a dialogue that will help them to avoid radicalism and a societal rift.

With an obvious reference to the Ukrainian crisis, he added: “society has to demonstrate tolerance towards a diversity of opinions and intolerance to any revolutions. We are tolerant of any opposition as long as it is constructive”.

Russians’ Rights in Belarus and the Russian Language

Continuing to draw parallels with the situation in Ukraine, Lukashenka commented on “some speculations” about the violation of the rights of Russians in Belarus. He called it complete nonsense stating that Belarusians have the same blood as Russians, which, in his opinion, makes any discrimination impossible.

In a slightly contrasting manner, he then stated that “we are neither pro-Russian, nor pro-Ukrainian, nor pro-Polish – we are Belarusian”. He added that Belarusians would live on their own territory and would decide for themselves what unions to enter.

The issue of corruption occupied a central place in the address. The amount of time that Aliaksandr Lukashenka devoted to it suggests that he is learning his lessons from the Ukrainian crisis, which, in his words, happened because of the corrupt Yanukovych government.

Lukashenka several times emphasised that the levels of corruption in the two countries are incomparable and that the Belarusian authorities have very harsh anti-corruption policies. To demonstrate this, he spent about half an hour discussing recent stories of high-ranking bureaucrats being arrested on corruption charges.

After that, the president offered three very progressive recipes against corruption that independent experts had been discussing for many years.

First, he suggested that the functions of the state, including the law-enforcement bodies, be limited. Second, he stressed the need to live within one's means: the less subsidies and public financial assistance government-owned companies receive, the more it helps to fight corruption. Here Lukashenka even promised to depart from his long-standing policy of so-called state paternalism. Third, the president spoke of raising the status of civil service and, in particular, increasing salaries there so as to minimise the incentives for taking bribes.

The economic part of the address offered some rather revolutionary ideas.

Lukashenka stated that he viewed his choice of socio-economic model in the 1990s as neither a mistake nor a great success. In his opinion, the country did not have any other alternative at that time.

It sounded like an excuse for the fact that the Belarusian economic model is turning less competitive and lagging behind the economies of other East European countries that went through reforms in the 1990s and 2000s.

Then Lukashenka started talking about a new Belarusian economy: “It is high time we enhanced our economic policy, in a quiet and evolutionary way but without delays or hesitation”. He suggested three targets:

These points do not necessarily indicate that Aliaksandr Lukashenka has changed his old anti-market beliefs. Some clarifications that he provided even seem to imply quite the contrary: for example, the internal market idea most likely originated from a desire to curb imports. However, the very fact that during his address he extensively employed a free market rhetoric is itself of interest.

Before the Q&A session President Lukashenka limited the issue of Eurasian integration to a few formal remarks. But when an MP asked him about the prospects for the Belarusian economy after the launch of the Eurasian Economic Union in January 2015 Lukashenka made quite a strong statement.

He reminded Belarusians that Russia had promised to resolve these issues but then changed its position, which excludes any possibility of a real union emerging. In Lukashenka’s view, after the failures of the Commonwealth of Independent States and the Union State of Belarus and Russia, the people want real progress. “If we want to totally embarrass ourselves then let’s not sign it”, he added.

This straight statement suggests that the summit of the Eurasian troika in Minsk on 29 April will see some really tough negotiations.

To sum it all up, Lukashenka tackled many issues in his annual address. They varied from serious and highly relevant to sometimes humorous. He even lectured the nation on recipes for a healthy diet. And judging by the discussion visible in social media, the president’s recommendation not to eat potatoes with meat (and eat potatoes with fish instead) resonated the most among the population.

Perhaps, this is due to the humorous and generally positive connotation of the recommendation. The rest of the speech appeared to be too alarming.