To be successful, reforms need a strong political leader. A Belief in Wide Discussions and Consensus is a Myth – says Ivan Mikloš, a Slovak politician "father of the Slovak reforms", who will participate in the upcoming Kastryčnicky Economic... 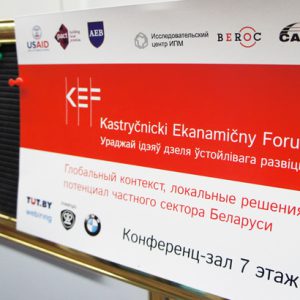 To be successful, reforms need a strong political leader. A Belief in Wide Discussions and Consensus is a Myth – says Ivan Mikloš, a Slovak politician "father of the Slovak reforms", who will participate in the upcoming Kastryčnicky Economic Forum, Minsk.

The potential for solidarity in the Belarusian society is vanishing – according to the results of the research conducted by the Centre for European Transformation and the Belarusian Institute for Strategic Studies.

The awareness of civil society organisations in Belarus has risen over the last years – Pact releases findings from a national survey conducted by the Independent Institute of Socio-Economic and Political Studies.

Polling Memo: Stable Society? CSO Awareness has Risen, Participation Remains Low – For the second consecutive year, Pact releases findings from a national survey conducted by the Independent Institute of Socio-Economic and Political Studies (IISEPS). According to survey results, the number of Belarusians who are aware of CSOs has stabilised at around 50% in 2014-2015, which is almost 20% more than in 2013. At the same time, the level of Belarusians’ trust in CSOs dropped from 37.7% last year to 32.2% in 2015. The level of citizen participation in public activities remain low – around 20%. Explore the full text of the polling memo in English. Russian-language version is also available.

Potential of Solidarity of the Belarusian society is vanishing – This is a key finding of the fresh study conducted by the Centre for European Transformation (CET) and the Belarusian Institute for Strategic Studies (BISS). The study is a continuation and development of the 2014 research on the potential for solidarity among CSOs. Belarusian society turned out to be even more amorphous, divided and atomised than the civil society.

Amplituda TUT.BY: Belarusian Society has Outgrown the Politicians who Represent it? – The Belarusian society has outgrown the politicians, so the society and politicians are not interested to each other. In the next five years economic challenges require responses from everybody. Such opinions were articulated in a regular issue of the Amplituda program by Valery Kalinousky (Radio Svaboda), Elena Artemenko (BISS) and Nikita Belyaev (Liberal Club).

Human Rights are Much Better Respected Here, in Belarus – New analytical resource IMHOClub.by posts an interview with a political refugee who returned to Belarus after 15-year living in the Czech Republic. The former publisher of the Belarusian opposition newspaper For Will, anarchist Yuri Puzikov tells "idleness in the EU simply killed him". As a result, he realised he wanted to be useful for his country and returned to Belarus to his girlfriend.

BISS Political Media Barometer (April-June 2015): The Media, But Not Politicians Set the Tone in the Coverage of Elections – Belarusian Institute for Strategic Studies (BISS) presents basic findings on media representation of political forces. Namely, elections much more influence on the communication of individual politicians than political forces. Leaders among politicians become Mikalai Statkevich, Tatiana Karatkevich (first presented in the ranking) and Anatoly Lebedko.

Belarus 2015 elections: A cautious rapprochement with the West – Alena Kudzko, the Central European Policy Institute (CEPI), considers that the instability in Ukraine, Russia’s increasing pressure to permit it to station its military airbase in Belarus, and the drastic worsening of the economic situation in the country are all factors that may motivate the Belarusian government to seek geopolitical and policy alternatives and new partners. The time is ripe for Europe to anchor a more pragmatic and realistic long-term approach to its notorious Eastern neighbour.

Same Old, Same Old? Belarus Votes – BISS senior analyst Dzianis Melyantsou together with a visiting scholar at the Carnegie Endowment and project director at Pact Balazs Jarabik prepared an article that analyses the presidential elections in Belarus. The authors believe that Belarus’s domestic situation and external environment have changed since the last elections in 2010. The 2015 electoral process, warts and all, shows how the Belarusian regime is attempting to adapt to these changes, while trying to keep the Soviet-style state machinery going.

Elections–2015: An illusion of unity before reforms start? – In its analysis of post-election situation, BISS warns that one should not expect the newly reelected president to implement large-scale structural reforms, contrary to what the West would like to see in Belarus. Only sporadic point transformations will be a lot likelier in the areas, which cannot do without changes, and where such modifications will have no political impact on the authorities. These conclusions are supported by Alexander Lukashenka’s recent statement against radical reforms.

Support for Reform is Important Not Only for Democracy, It is Not Accidental that Authoritarian Systems are Populist – Why developing countries are so vulnerable to a global financial crisis, why reforms need a "guillotine" and what errors are made by reformers – these issues are raised by Marek Dąbrowski, one of the speakers of the Kastryčnicky Economic Forum, KEF (3-4 November, Minsk), in his interview to TUT.BY. Marek Dąbrowski, a senior fellow of the Centre for Social and Economic Research CASE, worked in the Polish reformatory government of Leszek Balcerowicz.

To be Successful, Reforms Need a Strong Political Leader. A Belief in Wide Discussions and Consensus is a Myth – Ivan Mikloš, a Slovak politician and the former Minister of Finance of Slovakia, is known as "father of the Slovak reforms". Ivan Mikloš goes to Minsk for the first time to participate in the Kastryčnicky Economic Forum, KEF, and tells in his interview for TUT.BY, what determines the success of the reforms, if there is a risk of political suicide for the main reformer and why this issue is not necessary to consult with the people.

On 21 October, Alexander Lukashenka explained to the Regional Office for Europe Director of the World Health Organisation, Zsuzsanna Jakab​, how Belarus had succeeded in improving its health service and received many compliments from her for that.

Belarus has achieved much in the fight against certain diseases and has placed modern medical equipment in many hospitals, including an expert division of orthopedic doctors. But a few significant problems remain in the Belarusian public health system, some cities are missing up to 40% of the necessary personnel. On top of this the average medical worker earns only $325.

Moreover, the authorities continue a hypocritical policy of allowing alcohol to be easily accessible to Belarusians and isolating the Belarusian health system from global trends.

WHO Praises Belarus For Good Results

On 21 October, Alexander Lukashenka met with the WHO Regional Director for Europe Zsuzsanna Jakab, who openly praised the Belarusian ruler “for leadership and efforts aimed at improving the health care system that have already brought a clear result.” Jacob arrived in Belarus for a WHO conference “Health 2020”, which brought together several hundred European experts in the field of medicine, including 13 ministers of health.

In fact, public health remains one of the areas where the Belarusian authorities have achieved results. In 2013 the World Health Organisation stated that Belarus had achieved the Millennium Goals. According to the Bloomberg ranking, the Belarusian health care system is almost as efficient as the health service in Belgium. The Belarusian authorities have purchased modern equipment for Belarusian hospitals and built new medical centres. In 2015, the first nursing care hospital for patients with chronic diseases and disabilities was built in Minsk.

Belarus has achieved good results in the immunisation of children, the fight against HIV/AIDS, tuberculosis, child and maternal mortality. The authorities like to underline that no mother died in Belarus during childbirth in 2015. 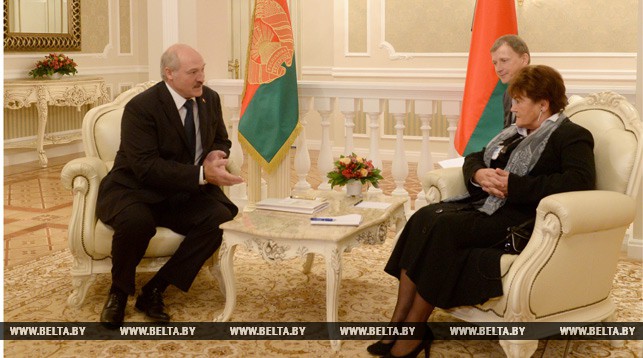 The health service remains quite affordable for ordinary people, and Alexander Lukashenka has not lost a single opportunity to emphasise this. On 21 October, he stated that “unlike other countries, people in Belarus do not die under a fence if they lack insurance.”​

Belarusian health care brings not only international recognition, but also money. Although 95% of medical centres remain state-run, they provide more and more paid services for Belarusians and foreigners. Former chief of Mossad intelligence, Meir Dagan​, had a liver transplant in Belarus and Russian neo-fascist, Maxim Martsinkevich​, had an eye operation in Minsk.

Russians often use the services of Belarusian clinics as they remain cheaper, better run and more effective than Russian ones. For instance, MRI of the brain in Belarusian top clinic costs around only $60.

Another Story of the Belarusian Health Service

Yet in reality many Belarusians have another vision of the domestic health care system than Alexander Lukashenka. This is due to the lack of specialised doctors and huge queues at clinics.

Some Belarusian cities, according to the Health Minister Vasil Zharko, lack 30-40% of necessary medical staff. Furthermore, a large percentage of the existing staff are either retired, due for retirement or are interns. Often it remains impossible to get an appointment with a doctor, because there is not a qualified doctor in town. Even if a hospital has modern equipment, the waiting time for the use of the equipment can be a few months.

A few doctors even leave the profession or the country because the average salary of health workers, according to official statistics, in September totaled $325. Naturally, doctors earn more, and medical personnel such as nurses earn less. In neighbouring Poland by contrast health workers earn three times more than in Belarus.

To earn this money, health workers usually have to take one and a half full time jobs. Doctors joke, that if they worked only one job, they would have nothing to eat, but if one works two jobs, he has no time to eat.

In the regional context it may seem that Belarus has a similar health service to Poland or Lithuania. All of them have achievements and failures. However, life expectancy in Poland or Lithuania remains higher than in Belarus by five and two years respectively. Moreover, the difference between life expectancy among men and women remains striking in Belarus. Belarusian women live on average 78 years, while men only live to 67.

The state policy of alcoholisation partly explains the issue. It remains difficult to achieve good results in public health, when Belarus ranks first, according to the WHO, in world consumption of alcohol, and the state keeps alcohol prices low. Belarusians also occupy a leading position in Europe in terms of obesity and smoking. State institutions remain reluctant to see health system holistically, so they should not expect that Belarusians will have long healthy lives.

Also Belarusian health care lacks contacts with the outside world or even some basic opportunities to improve qualifications. Usually Belarusian doctors who would like to visit a foreign conference, have to take a vacation at their own expense, ask for permission to participate in the conference and pay all the costs of the conference from their pockets.

Despite the fact that the issue of medical care matters for the majority of Belarusians and opposition now and then try to politicise the issue, public health still has not become a topic of national debate. Even independent media rarely write about Belarusian medicine. However, many people would be grateful to the media and opposition, if they pressed the question of long queues and low salaries. For many, such issues matter more than democracy and human rights.