Large parts of Belarus and the Belarusian capital Minsk have spent this weekend under exceptional circumstances. The cyclone Javier has paralysed large parts of the country for almost two days.

While similar weather conditions in the USA would make it...

Large parts of Belarus and the Belarusian capital Minsk have spent this weekend under exceptional circumstances. The cyclone Javier has paralysed large parts of the country for almost two days.

While similar weather conditions in the USA would make it to the top news in Europe, there has been no mentioning of the storm in Belarus in Western media.

It started as simple snow fall on Friday morning, but approximately 20 cm of snow fell in the following 24 hours. The wind was 22 metres per second according to the Belarusian hydro-meteorological centre. Sight was limited to 100 metres in the Minsk region on Friday afternoon because of the heavy snow falls. Although the country is used to severe winters and well equipped to deal with large amount of snow, public life has come to a halt at this weekend.

By the time most Belarusians were trying to go home, the situation was at it worst. This led to a chaos that is extraordinary for Belarus. “The last time I have seen something similar was in the 1980s” says Sasha, who has reached home by walking from the metro station to his homes. Buses stopped running during the afternoon and have not re-started until Saturday evening.

Getting home during rush hour was very difficult for all people and impossible for many. “My colleague left the office at lunch time and got home at 4a.m.”, says Vasili. Indeed, circulation on the Minsk beltway came to a standstill during rush hour. 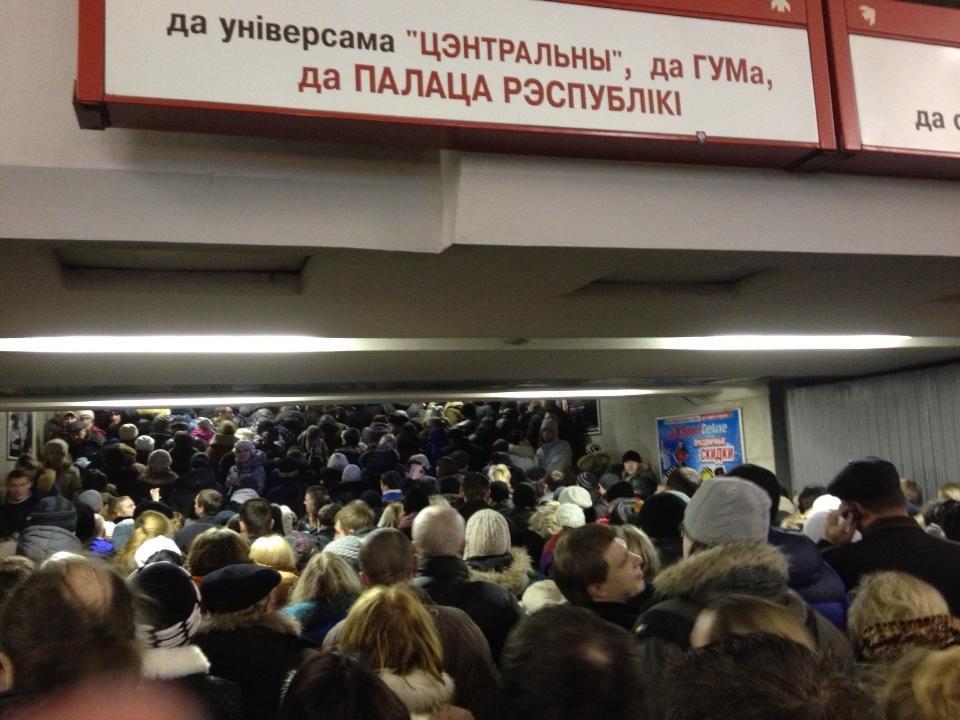 Thousands of cars were stuck in traffic jams. More than 650 traffic jams were registered in Belarus on Friday evening according to Nasha Niva. This is twice more than on a usual day, according to the road police. 3 people died in accidents. In several cases, more than 20 cars were involved in mass accidents.

For some time, the roads out of Minsk were completely closed. It was impossible to get from towns to the periphery of the capital such Dziarzhinsk and Fanipol’ to Minsk or back. Circulation on the main street in Minsk, the prospect, came to a complete still-stand during the rush hour.

Many people had to sleep at work or were forced to stay overnight with friends in the centre. As there were no buses running, the metro had to be temporarily closed because it was so overcrowded. Those who could, left their cars at works and tried to get home by public transport. This turned out to be difficult, however, when only metro and regional trains could operate.

Thousands forced to spend the night in their cars

The roof of a car park near Hotel Minsk in the very centre of the capital fell down on account of the masses of snow covering it. The plastic roof buried around 30 cars but fortunately did not hurt a single person.

While in Minsk, inconveniences consisted mainly in perturbed traffic and the impossibility to reach home, by Friday evening more than 530 villages and towns in Belarus were left without electricity. Up to Saturday evening, 26 villages are still without electricity in Brest region. This region suffered especially from heavy snow falls and wind: 82 cars were freed from snow drifts. 320 persons, among them 37 children were in the cars. None of them was injured. 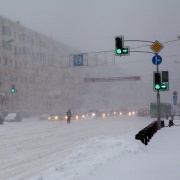 On Saturday, although the snow fall had stopped, Minsk was quieter than ever before. Around 20 000 employees and parts of the army that were called to support the city administration to clean the roads. The news agency BelTA informs that more than 900 snow clearing vehicles were employed to clear the capital.

Most people had to stay at home in the "sleeping districts" during the day. While even the courtyards and central parks had been cleaned from snow during the day, there were still no buses running or streets cleared in the suburbs.

Some shops stayed closed, as for example the Central Fashion Market. However, fresh bread and meat was delivered to the shops in the centre of Minsk.

Public life had to be postponed as well. All Maslenica events (Maslenica is the holiday of winter farewell) as well as football, hockey and basketball matches are to take place on Sunday instead of Saturday. The soccer team of the “Football Club Homel” had to spend 28 hours on the way to the quarter finals of the cup of Belarus that was supposed to take place in Minsk on Saturday. The players spent the night in their coach and finished their journey by regional train on Saturday morning.

While international airport Minsk II was closed for several hours on Friday, all passengers that were supposed to land in Minsk on Friday arrived there on Saturday morning. As planes could not touch down in Minsk, they had to be directed to Homel or Kyiv.

700 passengers had to to spend the night at the airport in Minsk. During the day, around 2,000 people were waiting to fly to their destinations. Unfortunately, the Belarusian national carrier Belavia did not accept that flying would not be possible on Friday and refused to inform passengers about what was going to happen according to a news report on tut.by. 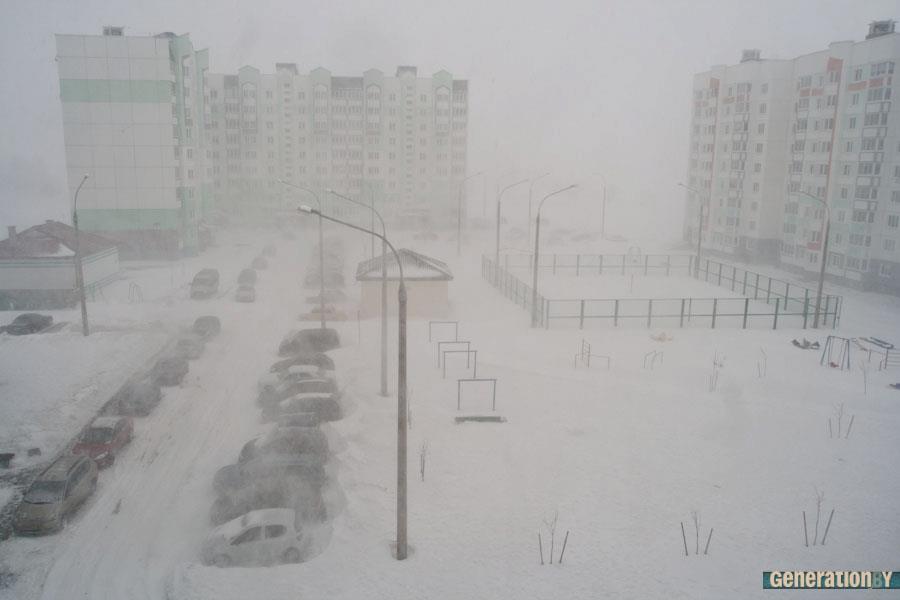 According to the Minsk city executive committee, the roads leading out of Minsk were opened only for a limited circulation in order to allow the vehicles to clear away the snow. This is also true for the majority of roads in the Minsk region. On the M4 from Minsk to Mogilev, there were still more than 30 km of traffic jam on Saturday evening.

For the upcoming days, the weather forecast promises less snow fall but still icy temperatures. The Minsk city administration did a remarkable job in clearing the centre from snow. But next time they should clean the roads on the outskirts of Minsk before clearing the parks and courtyards of privileged houses in the centre.

In his congratulation letter to the newly elected Pope Francis, Alexander Lukashenka invited the Pontiff to visit the "friendly Belarusian land".

Although two previous Popes declared the wish to come to Minsk, neither actually had a chance to meet the millions of  Belarusian Catholics. Whereas Minsk remains unwanted in the West, the Vatican appears an important mediator between both sides. However, for the first non-European Pope in a hundreds of years, Belarus could be too exotic to make it a priority and visit the country.

Lukashenka has repeated on many occasions that he welcomes the Pope to Belarus.  During a meeting with the Vatican's Nuncio in April 2012, he expressed the will to strengthen both the Catholic and Orthodox Church in Belarus. Pope John Paul II never received an invitation to visit Belarus. But in 2002, Vatican officials conducted discussions with Minsk on the issue. However, as happened with Moscow, the visit never materialised.

A breakthrough in Belarus-Vatican relations took place with the new Pope Benedict XVI who met with Alexander Lukashenka and his youngest son Mikalai in the Vatican in 2009. Significantly, it broke for a moment the diplomatic isolation of Minsk in the West. It also turned out to be Lukashenka's first trip to Western Europe since his 1999 visa ban was implemented.  However, the Pope could not reciprocate the visit to Belarus. Instead, the Vatican’s Secretary, Cardinal Tarcisio Bertone, visited Belarus in 2009.

The Holy See has always supported the independent post-Soviet states. John Paul II in one of his audiences said to the representatives of the Belarusian Catholic clergy that “Belarus is the former Soviet republic that has undergone the least change since the fall of Communism, and is the least integrated into the rest of Europe”.

In May 2008, when Pope Benedict XVI addressed the new ambassador of Belarus to the Vatican, he said: ‘Please be assured that the Holy See will continue to support your nation in its efforts to affirm proper and legitimate aspirations for freedom and in her labours to foster the democratic process as a part of the great family of free and sovereign European nations.’

Concordat: Still to Be Concluded

A possible concordat remains an unresolved issue between Belarus and the Vatican. A concordat is a special document concluded between a church and secular authorities to regulate bilateral relations, including the right to religious education and protection of religious freedoms.

The leaders of the Russian Orthodox Church, nominally the largest religious group in Belarus,  have already signed a number of agreements with the Belarusian authorities and view the initiative of a concordat with the Vatican with suspicion. The Patriarch of Moscow, Kiril, during his meeting with Lukashenka in September 2009 said that ‘Belorussia is not a bridge, nor a gateway, but a Western part of the Saint Rus, historical Rus’.

The 2009 visit of Lukashenka to the Holy See might have heralded a conclusion of the document. Nonetheless, until now the two sides have failed to conclude it. According to the head of Belarusian Catholics, Archbishop Kondrusiewicz, the conclusion of the concordat would enhance the prestige of both the Roman-Catholic Church and Belarus in the international arena.

Concordats with countries where Catholics are in a minority are not unusual. For example, Montenegro was the first country with a majority of Orthodox citizens to conclude a concordat with the Vatican, in June 2012. During the act of conclusion of the agreement, Benedict XVI confirmed his support for the European integration ambitions of that country.

Through Vatican to the West?

Lukashenka’s 2009 visit to the Holy See remains remarkable for a few reasons. Ten years of isolation of Minsk might have given its leadership hope for improving the relationship with the West. Whereas the West spurns Lukashenka, he finds himself more comfortable with the East.

For Lukashenka, the visit to the Vatican was particularly prestigious at the moment when nobody in Europe wanted to do it. This was probably one of the reasons why the Apostolic nuncio in Belarus was the only diplomat who could visit the Belarusian prisoners of conscience.

The Vatican still appears as an important mediator, but also as a promoter of Western values. At the same time, the Pope with his moral authority is in a good position to improve the image of the West in Minsk, which is a subject of frequent attacks by Belarusian propaganda.

It is too early to speculate over the politics of the newly elected Pope. Most likely the new Pope does not have any special links or emotional attachment to Belarus. He was born and grew up in Argentina where most people are most likely not sure where Belarus is.

The two previous European Popes –  John Paul II and Benedict XVI – carried a ‘regional historical burden’: both witnessed the atrocities of WWII and were aware of the post-war and transformation difficulties Eastern European societies faced.

However, the new Pope may wish to continue their activities and strengthen the position of the Church in the region as the previous leaders of the Holy See did. It will be an important event for Belarusian Catholics and for Belarus, but may raise concerns for those who will regard the visit as tacit support for "Europe's last dictatorship".