Fear and Loathing in Barysau

On 8 November, in a repeat of his 2012 visit, Alexander Lukashenka sent waves through the headlines in all Belarusian media during a visit to a state-owned woodworking manufacturer Barysaudreu in Barysau, a town 60 km from Minsk. 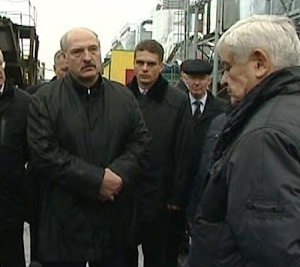 On 8 November, in a repeat of his 2012 visit, Alexander Lukashenka sent waves through the headlines in all Belarusian media during a visit to a state-owned woodworking manufacturer Barysaudreu in Barysau, a town 60 km from Minsk.

The two events, separated by a year, bore different messages for the Belarusian political class. In November 2012, Lukashenka extended a blank cheque to the state-owned industry. Last week, confronted with the failure of his policy, the Belarusian autocrat resorted to fear-mongering and publicly fired several top officials.

Last year’s visit from President Lukashenka to Barysaudreu sealed the acceleration of a kind of Belarusian analogue to an industrial “New Deal”. Under the label of “modernization”, large state-owned manufacturers received access to unprecedented amounts of public funds.

Launched in the late 2000s, the policy aimed to improve the competitiveness of Belarusian industry through massive investment in new equipment. As an example, by 2013 the modernization of the woodworking industry alone cost the state budget over 800 million USD.

This year, Alexander Lukashenka arrived in Barysau amid news of numerous flops with the process of  “modernization”. The case of the Liahavichy flax factory became a poster child of waste, as the newly bought state-of-the-art equipment did not fit in the factory building. The inspection gave the Belarusian leader an opportunity to give his assessment of this “modernization” and the way in which it is conducted.

In his typical manner of combining a staged performance with scathing impromptu exchanges, the Belarusian strongman announced a series of sudden dismissals of top-tier officials. Assuming the role of a harsh manager, Lukashenka spared neither invectives nor threats.

He publicly sacked the deputy head of the Presidential Administration Andrei Tur, the governor of the Minsk region Barys Batura and the head of Bellesbumpram, Alexander Pereslautsau. A number of key top officials received harsh reprimands.

The dressing-down of high-level bureaucrats came at a peculiar time. Both official and independent economists have come to a rare agreement about a coming economic shock. In October 2013 the government and the National Bank presented a joint economic action plan. The plan combined some economic liberalization with public spending cuts. Independent analysts, such as Sergey Chaly, have long argued for structural reforms and currency devaluation.

In foreign policy, Lukashenka’s flirtations with the West neither got him IMF loans or EU investment nor any generous economic support from Russia. On October 28, the IMF mission left Minsk with a straightforward message — no loans would be coming from the IMF to the beleaguered Belarusian economy. European politicians are openly sceptical about cooperation with Belarus within the existing “Eastern Partnership” framework.

Lithuanian MP Audronius Ažubalis claimed that the role of Belarus in the coming Vilnius summit will be “modest, irrespective of who will represent the country”. Further loans from the Eurasian Economic Community are not yet in question, as Belarus awaits the last installment of the current credit line.

Left  onlywith painful economic choices only, Lukashenka may seek to achieve some effect on the economy by showcasing repression. And it is equally plausible that a credible threat from an autocrat with a record of political violence may prod some officials to innovate, whether it be it finding some relief for illiquid Belarusian goods or fabricating another solvents affair.

While those are mere speculations, two things are clear. First, the Belarusian leader is not ready to sanction structural economic reforms. Second, he assigns blame for the failure of “modernization” to the officials who implement it, and not to the policy itself.

A game of balancing

With the presidential elections looming in 2015, the president’s economic woes increasingly translate into political problems. The Belarusian population remains passive — in October Lukashenka’s electoral rating hit a new high since the 2011 crisis, according to the latest IISEPS data. Coupled with the disorganised state of the opposition, the only foreseeable challenge to his power can come from within the bureaucratic elite. By mounting a wave of repression against the bureaucracy, Lukashenka would clearly raise political stakes rather than hedge his bets.

This can explain that despite the president’s feisty rhetoric, the actual consequences of the Barysaudreu incident have proven to be rather modest. None of the publicly fired officials were prosecuted. Lukashenka’s spectacular exile of the ex-governor Batura to Barysaudreu at the threat of imprisonment turned out to be a bluff. More importantly, Euroradio has reported that the failing woodworking industry will soon receive another installment of “modernization” funds totaling 214 million USD.

Facing the mutually exclusive need to punish those responsible for the “modernization” flop and to secure the political loyalty of the bureaucracy, Lukashenka is starting a game of careful balancing. By sacking one person from each of the three large bureaucratic bodies (the presidential administration, the executive, and the head of a major state-owned industrial complex), he is sending a signal that no official can feel secure anymore.

With his unwillingness to prosecute any of them while pumping more money into the industry with a track record of waste, the strongman is making a placatory gesture to the silent bureaucratic majority, which is hoping to survive another fit of the ruler’s rage.

When leaving Barysaudreu, Lukashenka announced a new wave of inspections at the recently modernised enterprises. To fulfill his promise, the following days saw snap inspections at woodworking companies in the Vitsebsk region. By making good on his threats, Lukashenka is trying to affirm his political stand and may also achieve some limited economic effects.

Alexander Lukashenka has enough power to exercise complete ascendancy over all the tiers of the ruling elite. However, both sides are also aware of the fact that at the time the president cannot afford across-the-board repression against the political elite. Under the circumstances, Lukashenka will probably aim for an uneasy cohabitation with the elites, while at the same time putting them under increasingly more and more pressure.

The main lesson from the president’s recent visit to Barysaudreu for the Belarusian elites is that despite the mounting failures of Lukashenka the manager, Lukashenka the politician is showing no signs of either losing his political instincts or loosening his firm grip on power. 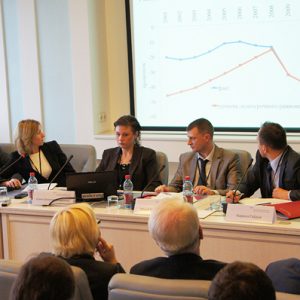 Slow economic growth, inefficient capital accumulation and the steady outflow of its labour force from Belarus became the hottest topics at the Kastrychnicki Economic Forum (KEF) held on 5 November in Minsk.

Belarus has exhausted its potential for economic growth

The global economic crisis had a decidedly negative influence on economic growth throughout Europe, but it was not the global economic crisis alone that became the impetus for the economic hardship faced by Belarus. According to research carried out by BEROC experts Dmitry Kruk and Katerina Bornukova: “Factors of economic growth in Belarus: Analysis of productivity by sectors”, the productivity of the economy continues to stagnate and the level of economic growth in recent years was in part due to the country's accumulation of capital. The authors claim that it is a systemic problem and such growth cannot be sustainable.

They also noted that Belarus lost its exporting competitiveness as a result of inefficient capital accumulation and its overall lack of productivity. Comparing the growth of productivity in Belarus with the Czech Republic and Sweden the researchers found out that the productivity gap with developed countries is declining very slowly and has even grown in comparison to other leading economies.

When analysing economic growth by certain sectors, it became evident that only three sectors demonstrated any strong growth in productivity. Growth in fuel, chemistry and petro-chemistry industries with ties to preferential access to Russian oil were the clear leaders. The growth in productivity in the  construction materials industry and hotel business occurred due to the artificial stimulation of internal demand.

Kruk and  Bornukova suggested that the quickest and cheapest way to increase productivity would be to ensure free redistribution of resources. But it is almost impossible for a "welfare state" like Belarus. The Belarusian government has too made too many promises and commitments to inefficient industries, structures and other economic actors to be able to change the situation at present.

Approximately 130–180 thousand Belarusians works in Russia. An expert from CASE Belarus, Uladzimir Valetka, researched how money transfers from migrants influence the Belarusian economy. He claims that in 2012 economy received from migrants around USD 950 million. The actual sum is likely much higher.

Valetka concluded that the most productive and active citizens migrate from the countryside. This is the consequence of low income differentiation in Belarus and a significant difference in income between Belarus and Russia. Under these conditions qualified professionals decide to work in Russia instead staying in Belarus and earn less money.

The effect of migrant remittances influences the economy both positively and negatively. On the one hand, this causes an increase in domestic consumption and brings in investment. On the other hand, it leads to brain drain and a reduction in incentives for government agencies to change their policies – in other words, the unemployment problem has solved itself.

Valetka believes that the state needs to increase income inequality to retain the most active labour force and to give them an opportunity to earn at home.  In addition, he proposed to establish a bureau of remittances within the National Bank to allow the Diaspora to invest their capital in the country with privileges and preferences. This would effectively increase the amount of investment coming into the country.

Improvements may come through reforms

The Institute for Privatisation and Management researchers Ihar Pelipas and Iryna Tachytskaya claim that to improve the investment climate, Belarus needs reforms and only the state authorities can these initiate changes.

The first group of factors describes the basics of competitiveness. It includes the country's transportation infrastructure, macroeconomic environment, institutions and public health – and these factors dominate in the regions. The second group of factors estimates the effectiveness of growth: higher education, commodities, labor and financial markets. The third includes the innovation potential and business skills of the country.

The results showed that Minsk and the Minsk region have become the most competitive regions. The Homel and Hrodna regions closely trail the capital in this regard. The Brest region was last on the list of competiveness. The differences between the Belarusian regions' competitiveness at appears to be insignificant. On a seven-point scale all of them are situated between 3.5 and 4.

According to Ihar Pelipas, if Belarus participated in the international ranking of the World Economic Forum the country would be located between 60th and 80th place. To move up in the rankings Belarus needs to improve the key problems for generating business.

Primarily they should solve the issues related to legislative and legal instability, inflation, tax rates and the complexity of the tax code. Local authorities do not have the power to deal with these issues, as only the central government can initiate reforms for improving the investment climate.

The inevitability of reform?

For a long time many experts have proclaimed the necessity of economic reform in Belarus. The Kastrychnicki Economic Forum once again demonstrated that the Belarusian economy faces challenges and needs to undergo a process of transformation.

Belarus features a poor business climate and substandard public administration. With a large public sector, the lack of development of its financial markets, a lack of human capital, restrictions on foreign investment, populism and an excessive social policy burden – this partial list of issues that the Belarusian economy has to deal with, if solved, could help Belarus overcome its own economic downturn.

The real question is if the Belarusian political elite are capable of initiating these economic reforms. Nothing they have done has stakeholders their intentions to do so at the moment. Reforms would mean the transformation of its management system, unpopular economic measures and liberalisation which can lead to the disruption of the status quo in Belarusian politics. Under these conditions one can expect only half-measures and partial reforms.