Aliena Arciomienka, BISS, analyses the impact of the crisis on the potential of street protest in Belarus. Thomas De Waal, Carnegie Europe, suggests Lukashenka’s balancing act is made easier by the confusion coming from the White House as to... 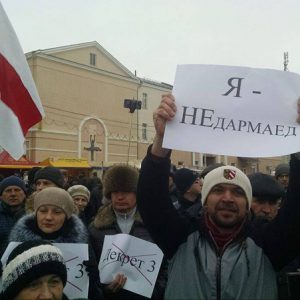 Aliena Arciomienka, BISS, analyses the impact of the crisis on the potential of street protest in Belarus. Thomas De Waal, Carnegie Europe, suggests Lukashenka’s balancing act is made easier by the confusion coming from the White House as to what constitutes current U.S. foreign policy.

The new papers added to Belaruspolicy.com database include a study of the Belarusian High Technology Park, joint stock companies, and the 8th issue of the Macroeconomic Review of Belarus.

This and more in the new edition of digest of Belarus analytics.

New Quality of Protest. Why Belarusians Began to Take Streets – Artiom Shraibman, for the Carnegie Moscow Center, writes about the protests against the “social parasite tax.” People were brought to the streets due to a mixture of two emotions – they feel that they have nothing to lose and nothing to fear. This is a new quality of protest for Belarus when the passive majority is sympathetic not to the president but the protesters.

What Do the Protests in Belarus Mean? – Yauheni Preiherman, for the Jamestown Foundation, analyzes a series of protests in Minsk and regional cities in recent weeks that made headlines both inside Belarus and abroad. The fact that they gathered the largest number of protesters in almost seven years sparked active discussions as to whether the protests can become a game-changer for Belarusian domestic politics and the country’s role in regional affairs.

Impact Of the Crisis On Protest Potential of Unemployed – Aliena Arciomienka, BISS, analyzing the recent protests against the decree №3, draws attention to the polls on the Belarusians' attitude to reforms. From 2014 to 2015, the number of unemployed Belarusian ready to participate in rallies raised from 4% to 23%. Such protest potential is growing not constrained by any fear of job loss or deterioration of labour conditions or the lack of support from the state.

Why Belarusian Business Supports Social Projects – Aliaksandr Skraboŭski, head of the National contest Social Weekend, explains who and why social projects. One of the answers is that Belarusian business wants to reflect the degree of their maturity, their owners, employees, and thank the environment for the opportunity to run the business. Soon such intangible assets will remain almost the only competitive advantage on the market. 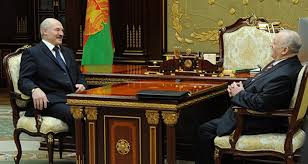 Will Lukashenka follow Jaruzelski’s steps? – Aliaksandr Klaskoŭski follows up on a recent meeting between Lukashenka and Iosif Siaredzič, chief editor of Narodnaja Volia independent newspaper. The author concludes that the crisis in Belarus is not as acute as it was in Poland in late 1980s to make Belarusian leadership hurry up with the national dialogue, while Belarusian opposition and civil society should get out of the political ghetto to make the roundtable meaningful.

A Belarusian Balancing Act – Thomas De Waal, Carnegie Europe, notes that unprecedented series of street protests in several towns over the weekend of February 18–19, inspired by socioeconomic grievances, suggests that Alexander Lukashenka knows his regime needs to keep adapting if it is not to crumble. Lukashenka tries to keep his options open with the EU while not allowing Russia to take him for granted.

Situation In the Field of National Security and Defense of Belarus. January 2017 – According to Belarus Security Blog monthly monitoring, a new reality in the field of border security Belarus is the fact that starting from August 2016 Russia de facto withdrew from the regime of freedom of movement across the border with Belarus. The depth of the contradictions between the two countries makes real the prospect of a full-fledged return of border controls on the Belarusian-Russian border.

Civic Literacy Test in Belarus: High Basic Knowledge, Low Trust in Influencing Government – According to the Civic Literacy Test, the first national survey of the kind in Belarus, 75% of Belarusians have high knowledge of basic civil rights and responsibilities; at the same time, 99% believe they cannot influence state policies and decisions. The national survey was conducted by SATIO and commissioned by Pact in June 2016. The presentation will take place on March 15 in Minsk.

P.S. Zhadan. Catching poet-"terrorist" – Maksim Žbankoŭ, Belarusian Journal, reflects on a case of the detention in Minsk, the deportation decision and its cancellation of the famous Ukrainian writer Serhiy Zhadan. The analyst sees a clear message in that – the authorities have no logic, only emotions and instincts. One more conclusion is that a person in Belarus is totally unprotected before the authorities.

Work of the High Technology Park: a threefold increase in exports of IT services and what would happen if the park is closed. The results of statistical modeling that involves the method of synthetic monitoring for assessing the impact of High Technology Park on the growth of IT sector show that the creation of the park led to a threefold increase in exports of IT services in Belarus during 2006-2013. However, top managers of Belarusian companies are afraid of changes in the Park's legal environments and predict migration of IT companies in other countries, spread of semi-legal schemes of work and an overall reduction in the rates of IT sector development.

The anatomy of Belarusian joint stock companies. Little is known about how effective the Belarusian enterprises are, what share of the economy belongs to the state, how state-owned enterprises differ from private ones, how labour, capital and materials are distributed between the companies, and how emergence, evolution and exit of enterprises from the market impacts the economy. This work is an attempt to find answers to these questions by analysing the activities of the Belarusian joint stock companies.

Belarus’s new Russian arms: what Minsk has given in exchange 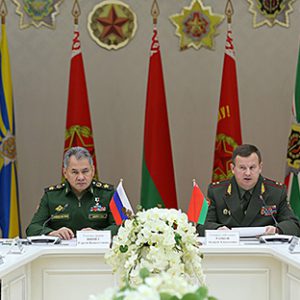 In other words, despite its dependence on Moscow, Minsk has prevailed in its dispute with the Kremlin over defence issues. Moscow initially did not wish to provide Minsk with weapons, intending instead to replace Belarusian with Russian troops. However, it has conceded one positions after another. Minsk has thus emerged victorious in this spat.

Minsk receives arms after agreeing to a military exercise

Minsk's first attempts to procure Su-30 from Moscow date back to the late 2000s. However, a flurry of official statements over the past year indicate that the deal may be in its final stages: Moscow has decided to sell the airplanes to Minsk at a minimal price, and the parties are hashing out the deal and its specific conditions.

As for the Belarusian government, it most probably succeeded in getting the new equipment delivered more rapidly than foreseen by promising to host a joint military exercise with Russia in September. The large-scale exercise Zapad-2017 had already caused a fall-out between Belarus, its other neighbours, and the West. It only makes sense for Minsk to agree to the exercise, which has undermined its recently repaired relations with the West, if it gets something valuable in exchange from the Kremlin.

The newest military equipment – which Russia had refused to provide to Minsk before – is a logical exchange. As recently as 23 November 2016, Belarusian Air Force and air defence commander Aleh Dvihalyou had spoken about general plans to buy at least a squadron of Su-30SM fighter jets from Russia as late as 2020. Now Moscow, eager to conduct a large show of its military might in the centre of Europe, promptly agreed to give Belarus the fighter jets.

Minsk refused to increase foreign military presence in the country. Nevertheless, the problem of maintaining the joint system of air defence remained. Thus, against its will, Moscow was forced to provide Belarus new aircraft to keep the system functioning properly. Minsk, certainly, will not pay very much for the aircraft. Given its status as a critical ally of Russia, this is a logical stance. Therefore, the Kremlin has invented a scheme to simultaneously arm Minsk and reduce its own costs. 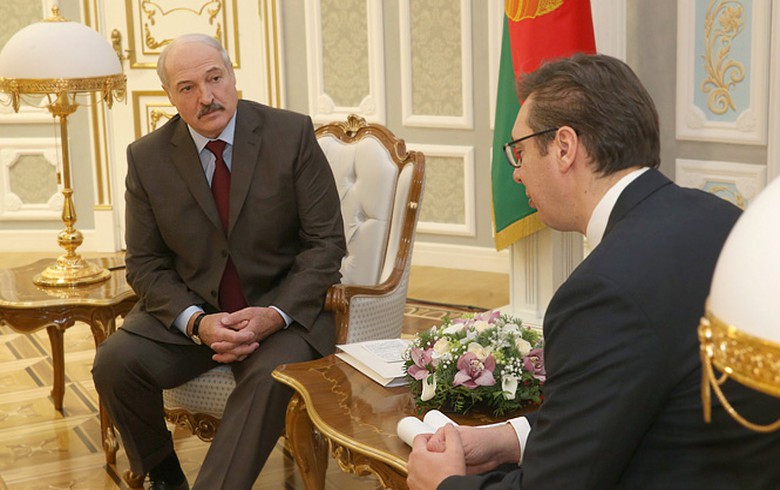 The most likely scheme is trilateral and involves Serbia. Last year, Russia promised Serbia's Russia-friendly government six MiG-29 second-hand fighter jets and some Buk surface-to-air missile (SAM) systems. The Buk deal failed, and anyway the six airplanes from Russia would not have sufficed for Serbia to rebuild its air force, which it lost in 1999. But then, on 27 January, after returning from Minsk, Serbian Defence minister Zoran Đorđević told the Serbian daily Politika that Belarus would supply Serbia with a further eight MiG-29 and two batteries of Buk SAM systems.

There are good reasons to believe that Moscow demanded that Minsk help Russia's friends in Belgrade in exchange for new arms for the Belarusian army. That is, Moscow prefers to send Belgrade Belarusian equipment rather than give it its own.

The conditions of the deal between Minsk and Belgrade are very similar to those discussed between Moscow and Belgrade, emphasises Politika. In both cases, Serbia has to pay a minimal price for the hardware and finance, leaving only overhaul and modernisation. The Belarusian government would accept such a deal only if the Kremlin forced its hand or offered it compensation. Otherwise, Minsk would have no reason to be so generous. It has almost always sold its decommissioned aircraft to the customer offering the best price: the most recent example being its sale of Su-24 bombers to Sudan.

According to the Stockholm International Peace Research Institute, in 2012-16 the Belarusian Defence Ministry purchased arms and military equipment from Russia worth $475m. They included multi-purpose Mi-8MTV5 helicopters, Yak-130 trainer jets, and second-hand S-300PS and new Tor-M2 SAM systems. Russia remains the principal source of defence equipment for Belarus. In comparison, in the same period Minsk purchased arms worth $10m and $2m respectively from its two other major partners, Ukraine and China.

The Belarusian government strives to achieve the greatest possible independence in the defence sphere. Thus, after the personal intervention of president Lukashenka, the defence ministry stopped the negotiations on purchasing Russian BTR-82A. The Belarusian leader instead insisted upon the use of alternatives already developed by the national defence industry. As a result, in January 2017 after government tests, the Belarusian army deployed modernised BTR-70MB1.

This was not an isolated case. Armament director of Belarusian armed forces Latsyankou stated in a recent interview that a major task of national defence industries this year would be re-installing various multiple rocket launch systems on Belarusian-manufactured chassis. Until now, they had been installed on chassis manufactured mostly in Russia.

In sum, the situation of Belarusian-Russian military cooperation is more complex than the basic figures of equipment procurement or personnel training suggest. Belarus and Russia are largely interdependent. 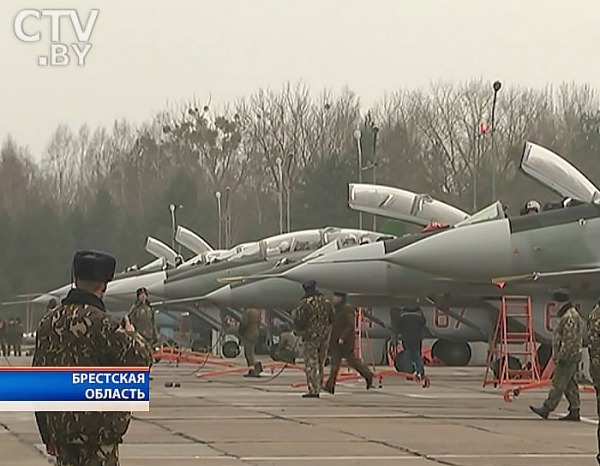 Belarus depends on Russia disproportionately for procuring military equipment, as it lacks money to buy from alternative sources. Russia critically depends on Belarus strategically. It needs Belarus because the latter is located in the vicinity of Russia's core region around Moscow and contributes to its security. Moreover, Belarus, as one of Moscow's few allies, helps the Kremlin keep the remnants of its imperial prestige by participating in demonstrative shows of Russian strength, despite avoiding backing Putin's adventurous moves in Ukraine, the Middle East, or the Caucasus.

Both governments try to diminish their dependence, but Minsk has more chances of success in the long run. The situation surrounding Russian plans for an airbase in Belarus in 2013-2015 and Minsk's final success in getting modern aircraft proves it.